How a Borges Character Anticipates Godse

The character of a German fascist in Borges's work shares uncanny similarities with Nathuram Godse – both consider acts of bloodshed more honourable than inconsequential acts of apostolic service. 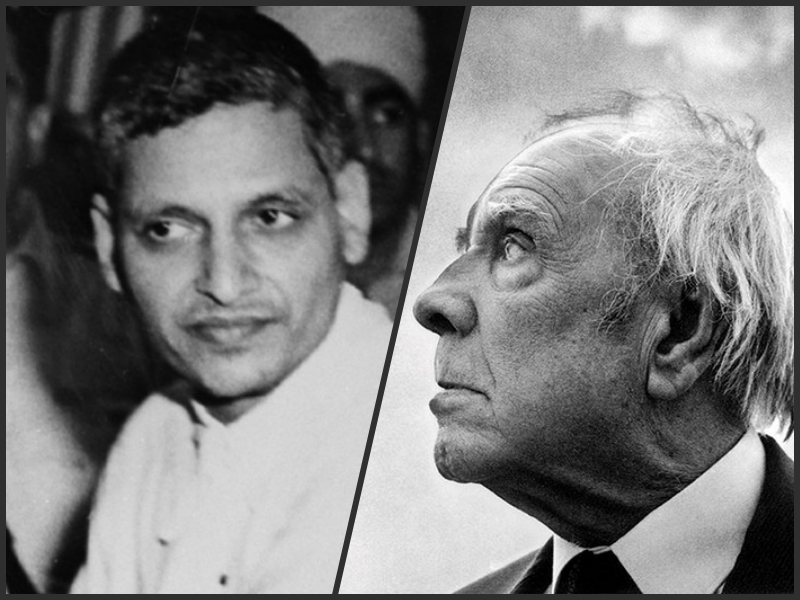 Jorge Luis Borges’s ideas on fascism are not much known or discussed.

He is rather infamous for his endorsement of General Pinochet’s Chilean regime. After travelling to Santiago in 1976 against good advice to receive a special honour, Borges praised Pinochet for saving freedom and order, “especially in an anarchy continent, a continent undermined by communism.” That act, it is believed, cost Borges the Nobel Prize. His discomfort with Soviet communism left him unimpressed by Salvador Allende. For Borges’s open dislike of his regime, Juan Perón appointed the writer “poultry inspector” at the ‘Buenos Aires Municipal Wholesale Market’. Borges refused the honour.

Despite his lenient views on a fascist regime near home, Borges was deeply disturbed by German fascism. In a short story titled ‘Deutsches Requiem,’ published in February 1946 in Sur, Borges offered a penetrating glimpse into the logical structure of a fascist psyche. It is a story of a one-legged commandant of a Nazi concentration camp, Otto Dietrich zur Linde, who reflects upon his crimes after being tried and sentenced to the firing squad.

In an interview with Richard Burgin, Borges said he was looking to create a Nazi character who believed “a violent world is a better world than a peaceful world”, someone “mainly concerned for the fact of fighting.” A similar motif was used by Borges in the short story ‘A Secret Miracle,’ published three years earlier in Sur, where Borges narrates the story of Jaromir Hladik, a playwright living in Prague reflecting upon his life after being sentenced to the firing squad for being Jewish by the Nazis occupying Czechoslovakia during the Second World War.

In ‘Deutsches Requiem’, Linde begins his unrepentant confession, saying, “I feel no guilt, but I do wish to be understood.” Born in Marienburg in 1908, Linde discovered Nietzsche and Spengler in 1927, and upheld Spengler’s depiction of the Faustian characteristic as a soul yearning for pure and limitless space, against Goethe’s Faust, who was a disenchanted intellectual. In 1929, Linde joined the Nazi Party. He felt the “threshold of a new age” was dawning, and just as during the advent of Christianity and Islam, this new era “demanded new men”.

When the Nazi army conquered Bohemia, Linde was reading Schopenhauer. From the first volume of Parerga and Paralipomena, Linde learnt of the predetermined nature of fate, that “every humiliation is an act of penitence” and “every failure a mysterious victory”. He also realised, “To die for a religion is simpler than living that religion fully; battling savage beasts in Ephesus is less difficult… than being Paul” and that “a single act is quicker than all the hours of a man.”

Linde defines the physiognomic mindset of his doctrine after he was made the sub-director of a concentration camp in 1941: “Nazism is intrinsically a moral act, a stripping away of the old man, which is corrupt and depraved, in order to put on the new.” There is no room for compassion in this new doctrine, as Linde concludes, “compassion on the part of the superior man is Zarathustra’s ultimate sin.” Speaking of David Jerusalem, a “Sephardic Jew” who was in his camp, Linde remembers, “I do not know whether Jerusalem understood that if I destroyed him, it was in order to destroy my own compassion. In my eyes, he was not a man, not even a Jew; he had become a symbol of a detested region of my soul.”

Fortunes began to change for the Third Reich, but Linde accepted his fate the way he accepted the symbolic logic of history: “(T) he history of nations records a secret continuity. When Arminius slaughtered the legions of Varus in a swamp, when he slashed their throats, he did not know that he was a forerunner of a German Empire.” He defends Hitler, as someone who, fighting for a nation, “was fighting for all nations” and against “that disease of Judaism.” Linde feels the Nazis sacrificed more than their own lives, they sacrificed their nation. Then he draws the chilling conclusion: “There are many things that must be destroyed in order to build the new order.”

Some of Linde’s reflections are reminiscent of Nathuram Godse’s speech in court on November 8, 1948, before he was hanged a few days later for Gandhi’s assassination. Using a similar logic of precursory history to facilitate a fascist idea of the nation, Godse drew instances of (community) glory and (national) territory by invoking epics: the Ramayana, where Rama killed Ravana, followed by the Mahabharata, where Krishna killed Kansa “to end his wickedness”, and Arjuna had to “slay his friends and relations, including the revered Bhishma, because the latter was on the side of the aggressor.”

Shifting from epical narrative to historical, Godse remembered “the heroic fight put up by Chhatrapati Shivaji that… eventually destroyed the Muslim tyranny in India.” Ravana and Kansa are symbols of evil. They are non-persons, whose eliminations are morally justified for establishing righteousness in the world. In Indian history, the Muslims came to represent that evil, and Shivaji took up the moral responsibility of a Rama and an Arjuna, to destroy the enemy.

Godse was bothered by Gandhi’s irritating “infallibility”, arbitrariness, and what he called Gandhi’s “eccentricity, whimsicality, metaphysics and primitive vision.” But the most irreconcilable issue for Godse was “Gandhi’s pro-Muslim policy”. Godse put the crux of his problem with Gandhi succinctly: “The accumulating provocation of thirty-two years, culminating in his last pro-Muslim fast, at last, goaded me to the conclusion that the existence of Gandhi should be brought to an end immediately.” Gandhi was siding with the enemy, and by doing so had become the “intimate enemy”, to use Ashis Nandy’s phrase. Eliminating Gandhi would reestablish the moral law within the religiously imagined community. Gandhi had become the “detested region” of Godse’s soul.

There were more fascist virtues at stake behind Gandhi’s just elimination. Godse said, “I thought that the Indian politics in the absence of Gandhiji would surely be practical, able to retaliate and would be powerful with the armed forces. No doubt, my own future would be totally ruined, but the nation would be saved… People may even call me or dub me as devoid of any sense or foolish, but the nation would be free to follow the course founded on the reason.”

Godse was ready to sacrifice his life to establish the kingdom of reason. Once Gandhi was out of the way, the rational affairs of politics, including the army, could be put in place. The necessity of might ensures morality. The righteousness of violence will ensure the “secret continuity” with the Hindu epics and Shivaji’s role in Indian history. Borges had thought the Nazis were “lunatics”, with “something epic about them.”

Drawing a circle of fascist reason, Godse argued that Gandhi’s old, pacifist body had no place in the birth of the nation that heralded a new order and a new morality. His compassion for Muslims was his sin. It was morally superior to die committing an act of righteous bravery than living with daily compromises. Godse suffered no guilt, and wanted his nation to simply understand him: “My confidence about the moral side of my action has not been shaken even by the criticism levelled against it on all sides.”

It is terribly interesting that Borges, imagining the character of a German fascist in 1946, created a precursor to a real figure who would make his mark on similar lines two years later in Indian history. Linde and Godse uncannily share a similar language of rationalist violence and a territorial sense of the soul of the nation. Both consider acts of bloodshed more honourable than inconsequential acts of apostolic service. For both, the other is the disease, and the new resurgence of national spirit demands its elimination.