The hyper-nationalist, assertive popular mood that we see in Xi Jinping’s China today, nurtured by the party-state, is a direct consequence of decisions taken by the Communist leadership that year.

A man stands in front of a convoy of tanks on the Avenue of Eternal peace in Tiananmen Square, June 5, 1989. Photo: Reuters/Stringer

In his new book, Tiananmen Square; The Making of a Protest; A Diplomat Looks Back, Vijay Gokhale has given us a precise, accurate and valuable account by an eyewitness of a pivotal incident in contemporary Chinese politics – the demonstrations and clearing of Tiananmen square. This book is an analytical and detailed look at the events of three months in 1989 in Beijing, shorn of the myths that Western and Chinese Communist Party (CCP) propaganda attached to them, then and later.

Gokhale’s book is a detailed account of the politics and factional fights within the CCP that made Tiananmen possible, by causing the apparent leadership paralysis between April and May followed by the crackdown on June 3-4.

Tiananmen gate itself has an interesting history. As Louisa Lim notes in her 2014 book, The People’s Republic of Amnesia: Tiananmen Revisited, in Ming and Qing times, it was the site of public trials, executions and torture like lingchi (凌遲, ‘death by a thousand cuts’. “Even Tiananmen’s name—the Gate of Heavenly Peace—is by no means as peaceful as it sounds,” she writes. “It was named by the Manchus, who were not very proficient in Chinese, in 1651 in the early years of the Qing dynasty. The translation of the original Manchu name is the “Gate of Heaven’s Pacification,” perhaps a more fitting re-flection of the fledgling empire that was busy suppressing resistance and launching deadly campaigns of conquest to expand its territory.” In our era, it is clear that Tiananmen was a turning point in China’s history. The reverberations of Tiananmen continue even though the party-state has done everything to suppress and obliterate the memory of what happened in Beijing and elsewhere, centered as they all were on Tiananmen Square in spring 1989. Gokhale has gone beyond a diplomat’s narration of what he saw to mine the literature and analyse the various accounts, many self-serving, of what happened, giving us as accurate a picture as possible of the events of 1989.

The broader lesson is that China is not an exception to the normal processes of human politics, despite the monolithic and all-knowing image that the CCP projects. Rivalries and jealousies among leaders, differences on policy, the search for allies and coalition building, and attempts to do down one’s rivals, are as prevalent in the CCP as elsewhere. The difference in China is, as Mao put it, that ‘Outside the Party there are parties, inside the Party there are factions.’ In other words, what happens outside the party in other polities occurs within the CCP in China. 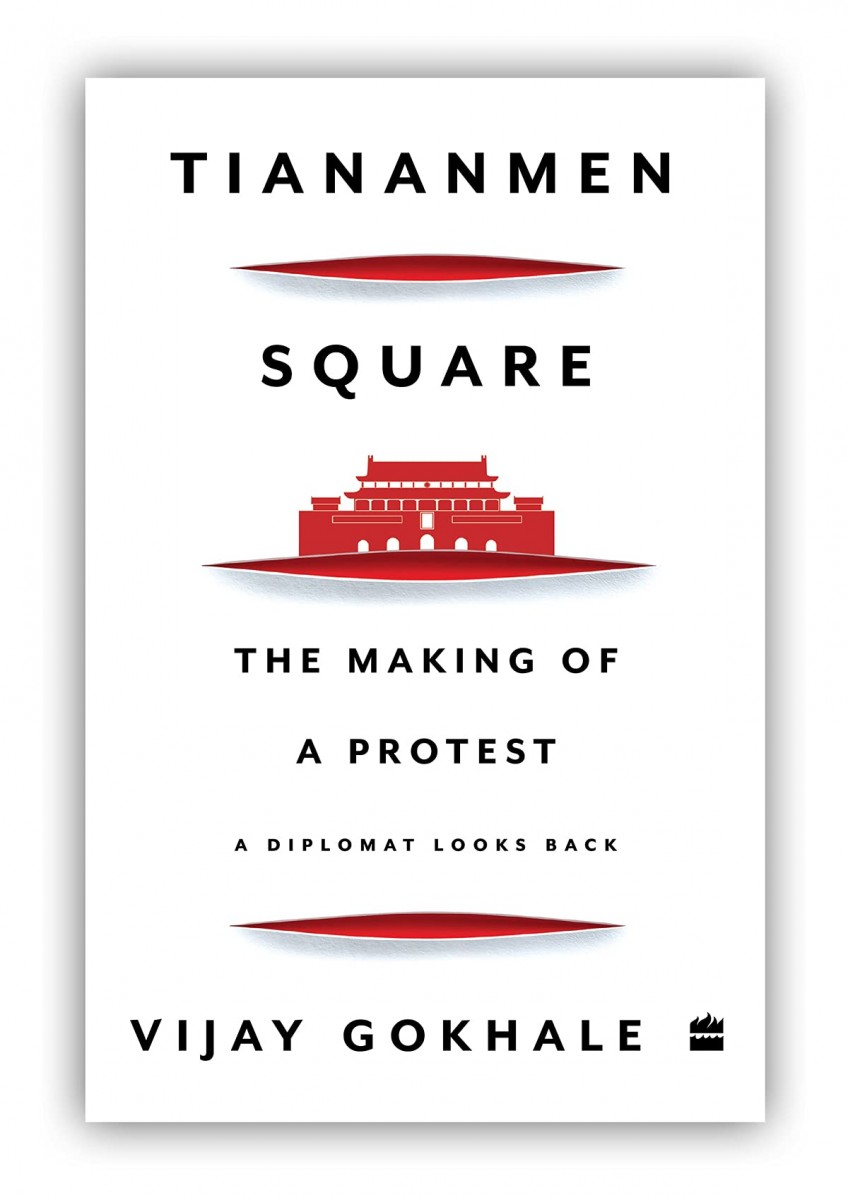 Vijay Gokhale
Tiananmen Square; The Making of a Protest; A Diplomat Looks Back
(Harper Collins, India 2021)

Tiananmen was one case where the CCP did not succeed in keeping secret what happened within the party, thus giving foreigners a valuable peek into the workings of Chinese politics. Gokhale has done a remarkable job of piecing this together from accounts by Zhao Ziyang and others, from documents that leaked out in that period, and from his own memory. As he says, there was a brief moment when we diplomats in Beijing “could speak to anyone we liked” (p. 98). That was truly an exhilarating feeling, not something that many foreigners have been able to say of their stay on the mainland since 1949.

What also stands out in Gokhale’s account is his detailing of the snowballing nature of the protests, with the students being joined serially by other social groups and sectors, thanks largely to the CCP’s actions. Starting with the students but then including intellectuals, the media, workers, and finally CCP cadres from the central organs themselves. Perhaps he could have included a little more about protests outside Beijing, with Chengdu being the notable omission. 1989 was a shock to the party in revealing the extent of popular discontent, which it subsequently tried to finesse by the creation of a consumer society, ideological campaigns and appeals to nationalism.

Gokhale’s analysis of the leaders involved is acute, as is his conclusion that there is probably not much difference between the goals of Deng Xiaoping and Xi Jinping.

There are, naturally, some things that one will never know conclusively about the events of 1989 in China. One of them is the number of those dead. Immediately after June 4, official Chinese media, including CCTV, showed graphic pictures of violence against the PLA in other parts of Beijing, trying to stress that this was indeed “counter-revolutionary turmoil”.

This was soon stopped, for they must have realised that this had the counter-productive effect of showing how widespread and popular the protests had been and cast the PLA in poor light. Since then, the party-state has spread a blanket of denial and amnesia over the protests. It is now clear that the protests were not only in Beijing, that killings away from the square and in other cities took place in considerable numbers – sufficient for mothers to still demonstrate today, 30 years later, and for the demand for revision of verdicts to be raised when possible.

The book gives one a clear idea of the political uses that those within and outside China put the protests to. The West, in particular, spun the media narrative into one of democracy breaking out in China, of a split in a mutinous PLA, and so on. None of these was true, and it was clear to those of us in the embassy like Gokhale that even the students had not thought of these goals, but that they reveled in the international attention that they were suddenly getting. Gokhale’s account also makes it clear how quick and keen the same Western countries like the US were to return to business as usual after the violent suppression of the protests.

At the same time, Gokhale’s book left me wanting more, as any good meal or book should.

What I would have liked to see in the book is a more detailed account of the 1989-1992 inner party struggle on the future of reform, leading finally to Deng’s 1992 Southern Progress which restarted the new wave of economic reform. One suspects that it was the PLA that enabled Deng to resume economic reform after three years, and that in return it has had an outsized role in Chinese policy since. 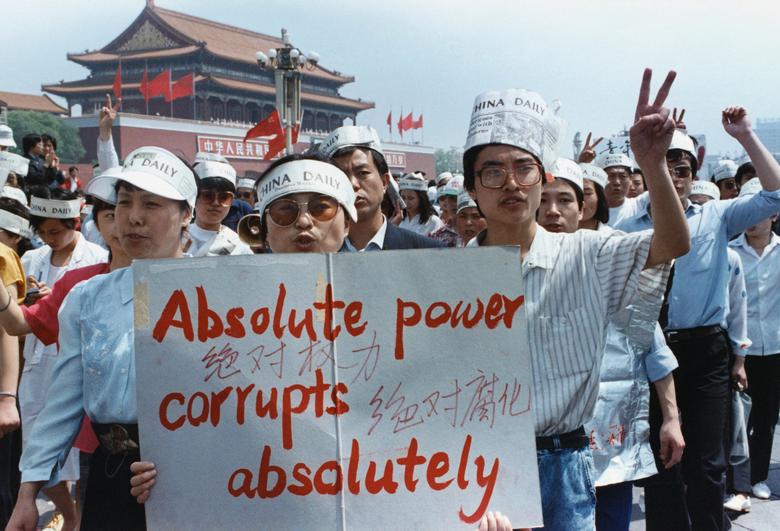 A group of journalists supporting the protest in Tiananmen Square, May 17, 1989. Photo: Reuters/Carl Ho

A little more of the author’s personal story and involvement would also have been welcome. Vijay Gokhale was one of the most active and well-informed diplomats in Beijing at that time. He has been unduly modest about his own role.

The events in Beijing in the spring and summer of 1989 were pivotal to China and its dealings with the world. The party-state in China would not devote so much attention to erasing the memory of the Tiananmen protests if they did not matter. Even today, official amnesia extends to arresting those who peacefully plan to mark the June 4 anniversary with a candlelight vigil in Hongkong in 2021, thirty-two years after those events.

If today Xi Jinping can centralise power and build a surveillance state, it is due in large part to the leadership compact that resulted from the fright they got at Tiananmen in 1989, losing control of their capital and having to smuggle Mikhail Gorbachev into the Great Hall of the People through the back door. There has been unprecedented elite unity in the CCP since then, unlike the repeated two-line struggles in Mao and Deng’s time. The role of the PLA in politics was enhanced. Legitimacy based on nationalism was the outcome of the patriotic education campaigns that Deng and Jiang instituted as a result of 1989 and their belief that the youth did not know enough about the good the CCP had done for them and the country.

The hyper-nationalist, assertive popular mood that we see in China today, nurtured by the party-state, is a direct consequence of Deng’s decisions taken post-Tiananmen, reinforced after the Soviet collapse, in a beleaguered frame of mind. China’s victimhood mentality, evident in the narrative of the “century of humiliation” which is the underpinning of the “China Dream,” is the result.

Two other consequences of patriotic education campaigns and the renewed stress on ‘a century of humiliation’ after Tiananmen were heightened anti-Japanese propaganda and a glorification of China’s imperial Confucian past. Anniversaries of Japanese aggression began to be marked, and museums commemorating events like the Nanjing massacre were built throughout the country.

China now chose victimhood rather than the heroic version of her history that Mao had put forward of the Chinese people standing up and fighting to take charge of their own fate against imperialism. Before 1989, the national flag was raised and lowered at Tiananmen every day by just three PLA soldiers. Today it is a full-fledged patriotic spectacle undertaken by 36 goose-stepping guards with thousands of spectators brought to witness it and have their patriotism aroused.

The conviction among the Chinese leadership that the West was out to change the ‘colour’ of China’s communist regime through ‘peaceful transformation’ was strengthened by Tiananmen and confirmed by the fall of the Soviet Union and the communist parties in East Europe soon thereafter. At the same time, the aftermath of the killings was instructive. Within weeks, President George Bush sent Brent Scowcroft to Beijing to limit the damage to US-China relations, former US president Richard Nixon went to Beijing in November 1989, and in less than two years it was business as usual between the West and China. The West made its choice of business over principle, over human rights or democracy, quite clear. It is from 1992 onwards that China’s masterly manipulation of Western avarice to amass material power by hook or by crook really took off.

Also read: What China Hopes to Gain From the Present Border Standoff With India

India was a short-term beneficiary of the beleaguered mindset in Beijing. A China internally preoccupied and expecting to be the target of Western regime change attempts was ready to commit to the status quo on the border in the Border Peace and Tranquility Agreement (BPTA) of 1993 and to put disputes with India on the back burner. While we gained almost 30 years of peace, in hindsight we should probably admit that China made better use of those years to strengthen herself and improve her international position.

All in all, Gokhale has done us service by writing this valuable book, setting straight the history of a critical event in modern Chinese history. And that matters in China. Today, once again the CCP is rewriting its history for its centenary. President Xi has released a new version of party history which airbrushes Mao’s mistakes, even those that the party resolution of 1982 admitted. That gives one an idea of the sensitivity of history in China, where history may be the closest thing to religion that the Chinese know.