Ninety-five years ago on November 9, Munich was witness to an episode that turned the wheel of Europe’s history to its darkest hour as very few events ever did, hopelessly blurring the dividing line between farce and tragedy.

A full 78 years before New York’s dramatic 9/11, Germany had its own 9/11 moment, far less spectacular than the razing of the Twin Towers, but not one bit less impactful.

In the early afternoon of November 9,1923, Adolf Hitler, along with some 2,000 comrades-in-arms, marched on Munich’s city centre in a preposterously abortive bid to capture power. Known commonly, if somewhat derisively, as the ‘Beer Hall Putsch’, this march was modelled on Mussolini’s infamous March on Rome the previous autumn through which Il Duce stormed to power in Italy.

In the ensuing melee, four Bavarian policemen and 16 Nazi volunteers lost their lives. The Fuehrer fled the scene and hid for two days inside the loft in a friend’s house, to be arrested from there and produced for trial for treason. The putsch had looked fizzy to start with, much like the free-flowing beer of the Burgerbraukeller, the beer hall that had propelled the Nazis to fame, but, in the end, it fizzled out quickly. It would be another nine years before the corporal was to be anointed chancellor of Germany – and arbiter of Europe’s destiny for 12 disastrous years. 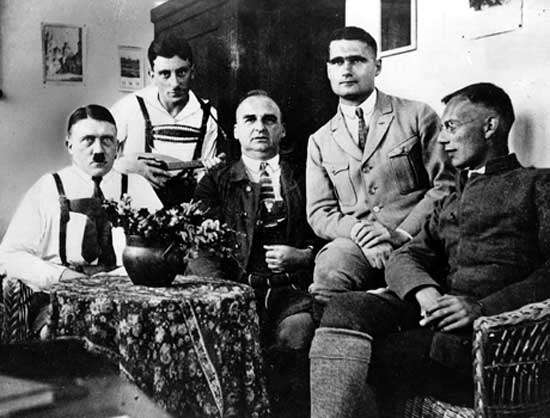 The reference to 9/11 is not fanciful: the Nazis sought to immortalise the putsch by marking their calendar permanently with its date, calling it Der neunte (9/11, literally, ‘the Ninth of the Eleventh’), and religiously observing every anniversary thereafter with typically Nazi sound and fury.

Every November 9, the march down Munich’s main streets would be re-enacted, there would be a memorial ceremony at Odeonplatz recalling  those 16 fallen comrades, and everyone would pledge themselves anew to the holy battle for  preserving the Third Reich till eternity. The tradition was scrupulously maintained till November 9, 1944, by when most of occupied Europe had been liberated and the writing on the wall was there for everyone but the most die-hard Nazi to see.

Marx famously wrote about how, when history repeats itself, tragedy often reappears as farce. Without getting into a discussion of the ‘original 9/11’ and its second incarnation, it will be fair to say that while the two 9/11s were both momentous episodes in history, both had elements of high tragedy intertwined with vulgar farce. The horrendous attacks on New York’s iconic Twin Towers that September morning were seen by the world outside as a particularly dramatic terrorist episode with a vast number of victims and a momentary public humiliation of the US, but not as much more, and certainly not as a cause for great alarm for the globe’s only superpower.

The reference to 9/11 is not fanciful: the Nazis sought to immortalise the putsch by marking their calendar permanently with its date, calling it Der neunte (9/11, literally, ‘the Ninth of the Eleventh’).

But “Washington announced that September 11 had changed everything, and in doing so, actually did change everything, by declaring itself the single-handed protector of a world order…” President George W. Bush declared that Saddam Hussein must be overthrown because Iraq possessed, and meant to hurl at others, world-threatening ‘weapons of mass destruction’ – a patently false claim. The war on Iraq began, “public mouths flooded the western world with froth as hacks searched for words about the unsayable and unfortunately found them”, the Middle East was plunged in the most violent chaos, perhaps for good, and soon Bush had himself photographed against a gargantuan banner that screamed ‘Mission Accomplished!’.

The dividing line between farce and tragedy was never more hopelessly blurred.

Unless one were to think back on November 9, 1923, and how its consequences played out in Germany. Hitler and his accomplices were tried for high treason, but had a quite ‘soft’ trial where the fanatically pro-Nazi lay judges (in Germany’s unique judicial system of a ‘mixed judiciary’, professional judges shared a bench with their lay brothers) clamoured for Hitler’s exoneration, the man himself waxed eloquent about his own patriotic fervour and how it obliged him to sacrifice everything for Germany’s sake, was sentenced to five years in prison but was eventually let off after a mere eight months on account of – hold your breath! – ‘good behaviour’. 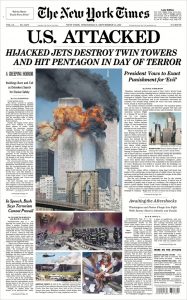 And even those eight months he spent in the comfort and relative freedom of the Festungshaft, the mildest of the three types of jail sentence allowed under German law at the time. At a minimum, Hitler ran the real risk of being deported back to his native Austria, but the benevolent trial judge opined that the relevant laws could not, in fairness, be applied to someone “who so sincerely thinks and feels like a German, as Hitler does”.

One would imagine that only Weimar Germany could be such an absurdly higgledy-piggledy world – unless, and this brings us back full circle, we were to remind ourselves of George Bush’s America, where in the great first flush of excitement, even the New York Times, the primus inter pares of the great American liberal media, ‘level-headed and poised’, went to town on September 12, 2001, with terrifying three-inch-large headlines that screamed “ U.S. ATTACKED”.

When, only three days later, the Nobel-winning Paul Krugman wrote in the same Times to the effect that “.. the aftershocks (of the attacks) need not be major. Ghastly as it may seem to say this, the terror attack …could even do some economic good. But there are already ominous indications that some will see this tragedy not as an occasion for true national unity, but as an opportunity for political profiteering”, he found few listeners.

The ‘political profiteering’ that Krugman so presciently talked about not only eventually laid waste to large parts of Iraq and Afghanistan, but gave birth to and nurtured the ISIS, thereby killing and maiming millions upon millions of men, women and children, making many more homeless, and generally changing many other  countries such as Syria and Yemen beyond recognition.

Also read: When a Long, Dark Night Lit up with Music: The Story of the Leningrad Symphony II

On the other hand, the tragedy that followed upon the rollicking farce that the Beer Hall Putsch had turned into was arguably the nearest thing to the apocalypse that man’s history has been witness to. Nearly 85 million lives lost, countless more forever scarred, the Holocaust, the unimaginable barbarism of the targeted bombing of civilians and the endless lines of desperate refugees fleeing to no one knew where – the Second World War’s record-book is as copious as it is frightening. It is not idle to speculate on what might have – or not have – happened if:

(a) Hitler were to get killed near Munich’s Odeonplatz that fateful November afternoon, or

Let us also not forget that the Fuehrer wrote Mein Kampf, his autobiography – or, in today’s corporate lingo, his ‘mission and vision statement’ – in the safe haven of the Bavarian prison to which that charade of a trial had consigned him.

However, not all the memories linked to Germany’s 9/11 are in unrelieved black. If you walk around the Odeonplatz today, as we did one late November afternoon in 2015, you will come across a somewhat unusual sight of an adjoining cobbled alley that has a broad golden strip snaking along its middle, down its entire length. 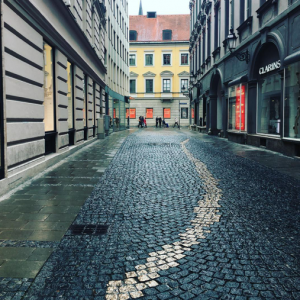 Viscardigasse, and the golden pathway is post-Hitler Munich’s tribute to countless brave men and women who dared to say ‘no’ to Nazi coercion.

That little street is the Viscardigasse, and the golden pathway is post-Hitler Munich’s tribute to countless brave men and women who dared to say ‘no’ to Nazi coercion. How this came about is a fascinating story. On the Odeonplatz, there has stood since 1844 a monumental memorial, the Felderrnhalle, erected in homage to fallen German military leaders.

Following the Nazis’ accession to power in 1933, Hitler ‘dedicated’ the Federrnhalle to the memory of the 16 Nazis killed in the 9/11 encounter. A fiat was then issued that whoever passed by that site had to raise their hand in the Nazi salute, the sinister Heil Hitler ritual. Sentries posted around the memorial kept a watchful eye on objectors who refused to comply, all of whom were taken away for questioning by the dreaded Gestapo, often to be summarily despatched to Dachau, Hitler’s first death camp located about 10 miles northeast of Munich. The threat of severe punishment was very real, and yet there were many who could not bring themselves to perform the obnoxious Hitlergruss. What they would do instead was to cut left just before reaching Odeonplatz/Felderrnhalle into this small alleyway, thereby avoiding Hitler’s favourite monument, and emerge on to the main street again beyond the plaza. This would save them the trouble of having to salute the Nazi ‘memorial’. The guards around the monument knew what was happening, of course, but there was not very much they could do about it. Except on 9/11 anniversaries, when the ‘solemnity’ of the occasion often impelled them to round up some of these conscientious objectors from the Viscardigasse itself, and hand them over to the Waffen-SS straight away.

In those terrible times, it took extraordinary courage to do what these resisters did, and yet everyday not an insignificant number of men and women weaved in and out of the Viscardigasse to cock a snook at the Fuehrer’s diktat. After Hitler’s spirit was exorcised in post-war Germany, Munich paved the Viscardigasse with bronzed cobblestones to mark the Golden Trail in memory of her brave citizens.

That bleak November afternoon, as snow flurries swirled around and a high wind rose to chill us to our bones, we bowed our head to the courage of those that walked the Golden Trail in Germany’s darkest hour.

Anjan Basu freelances as literary critic, commentator and translator. As Day is Breaking is the title of his book of translations from the noted Bengali poet Subhash Mukhopadhyay. Basu can be reached at basuanjan52@gmail.com