The curator of Kashmir's sole private museum wanted the present generation to witness, experience and relate to their past through the rich history preserved in rare artifacts and objects. 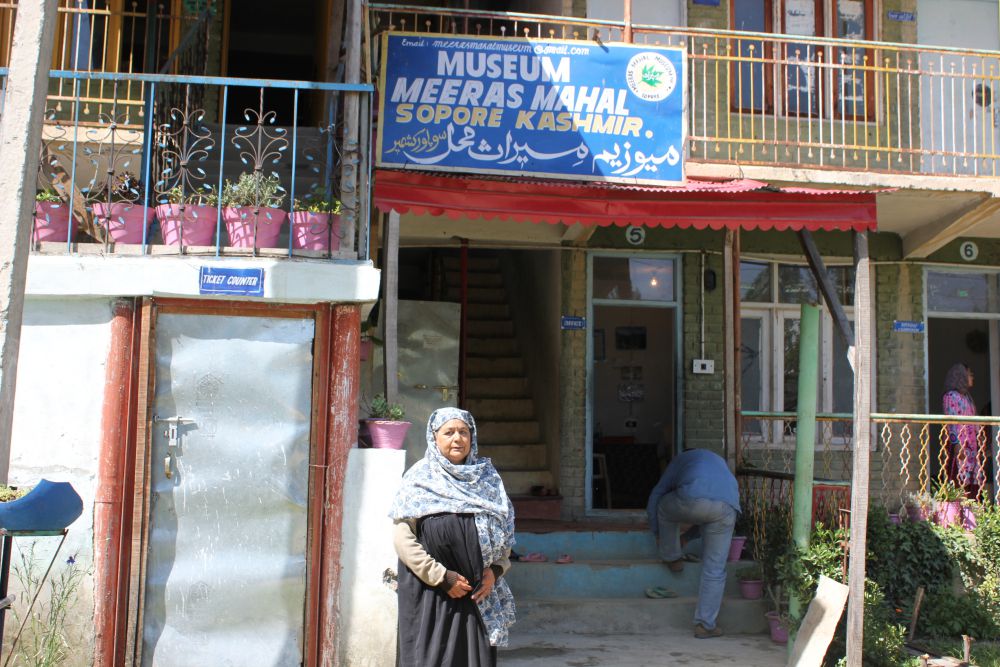 Atiqa Bano, a renowned educationist, heritage activist and curator of Kashmir’s first and only private museum, Meeras Mahal, passed away on October 4 at her residence in north Kashmir’s Sopore town. She was suffering from cancer. Bano, 77, was laid to rest close to her beloved museum.

Throughout her life, the soft-spoken ‘behen ji’ or ‘Atiqa ji’ – as she was popularly known – worked towards spreading education and empowering women. In her later years, she set up a unique museum to preserve the rich cultural heritage of Kashmir. Even after her retirement, she would personally travel to far-off districts of Kashmir region, collecting rare artefacts, manuscripts and other ancient items from strangers and families, anyone who could donate some relic from the past, which she would later preserve in her museum.

Born in 1940, Bano joined the state’s education department in 1958 as a teacher. In the 1970s, she also established Majlis-e-Nisa, an organisation that worked for the welfare of downtrodden women. She went on to become the joint director of education and retired as the director of Libraries and Research, Jammu and Kashmir in 1999.

Last year I visited her unique museum, which she had started after retirement in 2001 with some support from other individuals and friends. Over the past decade and more, the eclectic collection of artefacts, manuscripts, jewellery and other ancient items in the museum has only grown, occupying multiple shelves in a dozen rooms of her building, which she had turned into a museum. 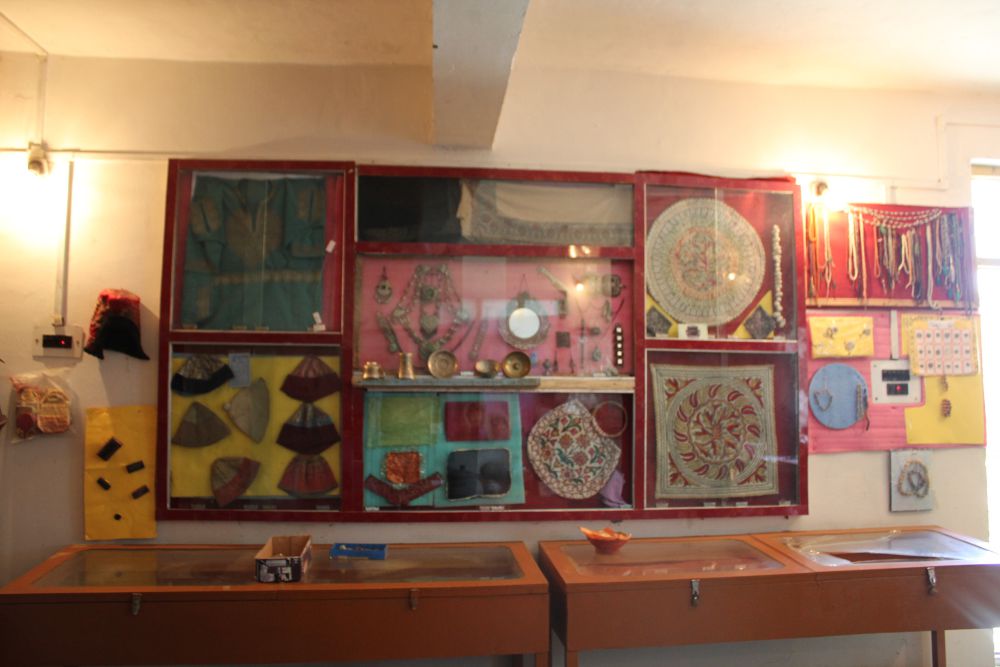 Jewellery, traditional Kashmiri caps and other items from the past stored in one of the rooms of the museum. Credit: Bhavneet Kaur

The impressive, rich collection was a result of several years of her dedicated work in the field. She would herself travel and painstakingly collect old manuscripts, artefacts and other items dating back hundreds of years from anyone who was willing to donate them. Despite her deteriorating health in the past few years, she would come to the museum every day, look after the collection with her support staff, and welcome and host anyone who came to see the museum from the city and other places.

Tracing the historicity of a culture through the objects and artefacts of everyday life, she became a unique historian and woman archivist of Kashmir. Collecting artefacts through anecdotes, research, people’s ancestral heirlooms, Atiqaji built and housed the museum in a two-storied building in Noor Bagh, Sopore, with the fragments and frames of a deeply rich Kashmiri history.

Manuscripts and handwritten copies of the Quran and Persian literature from her grandfather was the first room of archive that she opened for people, followed by a meticulous arrangement of other relics in roughly ten to 12 other rooms: Currency notes and coins, changing contours of Kashmiri pherans across time and religions, spectacles and watches, silver spoons and ladles, the diverse forms of Pashmina thread spinning yanders, mortar and pestles, hats, shoes, jewelry, wedding trousseau, lanterns, Kangris and clay pots, latticed windows traveling through time, rocks and fossils, stone utensils, tools, radio sets, a 200-year-old Doad Mich Waer (milk pot) and an installation of childhood game of walnuts and compass. 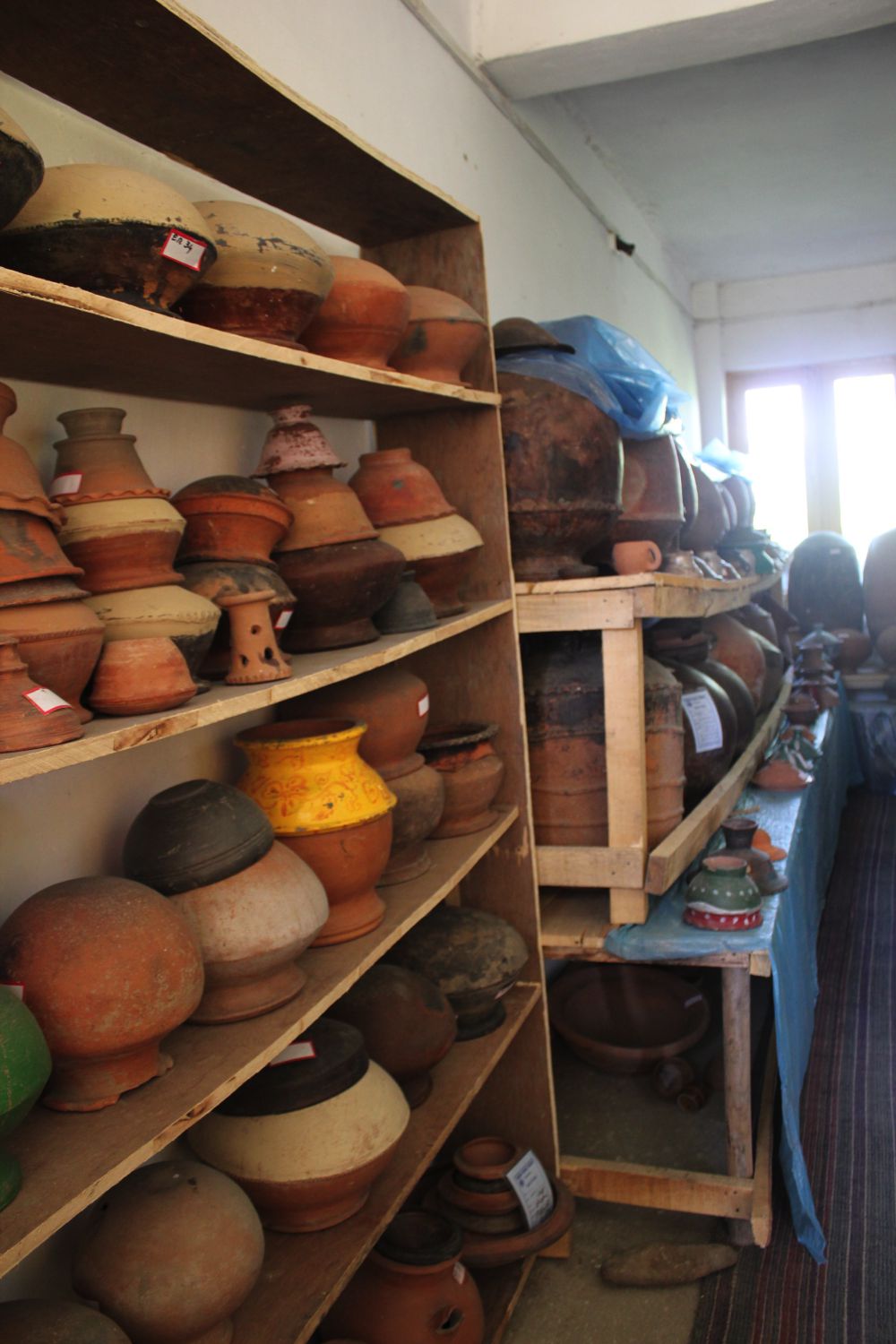 A collection of ancient pots and containers in which food and other items were stored. Credit: Bhavneet Kaur

When I met her last summer, she spoke passionately about her work and how she had struggled all these years to steadily collect artefacts, manuscripts and everyday objects she had preserved in her museum which was housed in her own property. One of the top floors of the museum building doubled up as a sewing centre where some local girls from disadvantaged backgrounds were imparted skill training. They would later go on to earn for their families. Bano would personally show her collection to whoever visited the museum with a childlike curiosity. She was in love with old, everyday objects that evoked the past cultural and social life of Kashmir.

In her attempt to preserve all these rare artefacts of symbolic meaning, she wanted the present generation of Kashmir to witness, experience and relate to their past through this history preserved in objects. She wanted more people to join this quest for finding meaning in past objects, for preserving and contributing relics from their homes to the museum.

“I started this museum from zero,” Bano told me last summer as she took me from one room to another, showing hundreds of artefacts and old objects on shelves which she’d painstakingly collected and preserved over the years. Her initial collection included some combs of ten different varieties and some old designs of jewellery dating back to hundreds of years which she had collected from some old relatives.

Bano started her museum from a single room of a private B.Ed college in Sopore, which she headed for many years. Then the museum was moved to her own property in Noor Bagh where two floors occupied her growing collection of rare artefacts, old objects, clothes, jewellery, ancient crockery and other household items of cultural importance.  She had even employed some four to five people who looked after the museum and the sewing centre in her absence.

There are about 200 old and rare manuscripts in Kashmiri, Urdu and the Persian language shelved in the museum library section in one room – all of them with proper binding. There’s an old copy of handwritten Quran which, she said, dates back to about 200 years. She has also preserved old house tiles which are as old as 3000 years. There’s some jewellery, old clothes and bridal headgear which Kashmiri women used to wear about a 100 years ago. 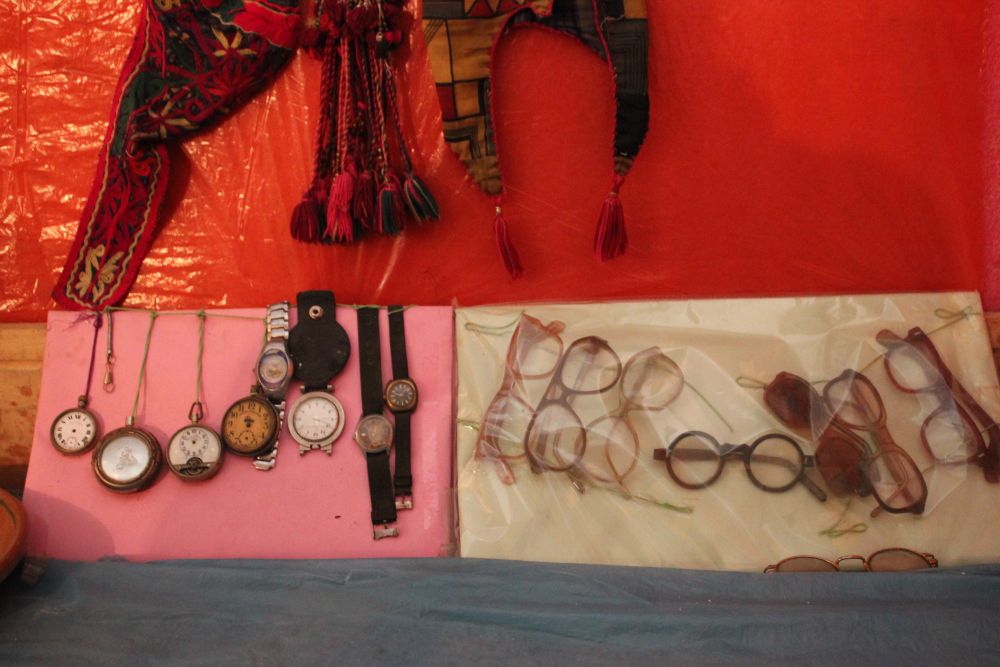 A collection of some watches, clocks and spectacles used in the past. Credit: Bhavneet Kaur

She said the museum houses some fossils which date back to about a hundred thousand years. She’d also collected some coins which were in circulation about 400 years ago. She has even kept some wooden doors and windows with old lattice work in the museum. Pointing at an old wooden window, parts of it broken on the edges, she said she’s been told that the window is about 600 years old. 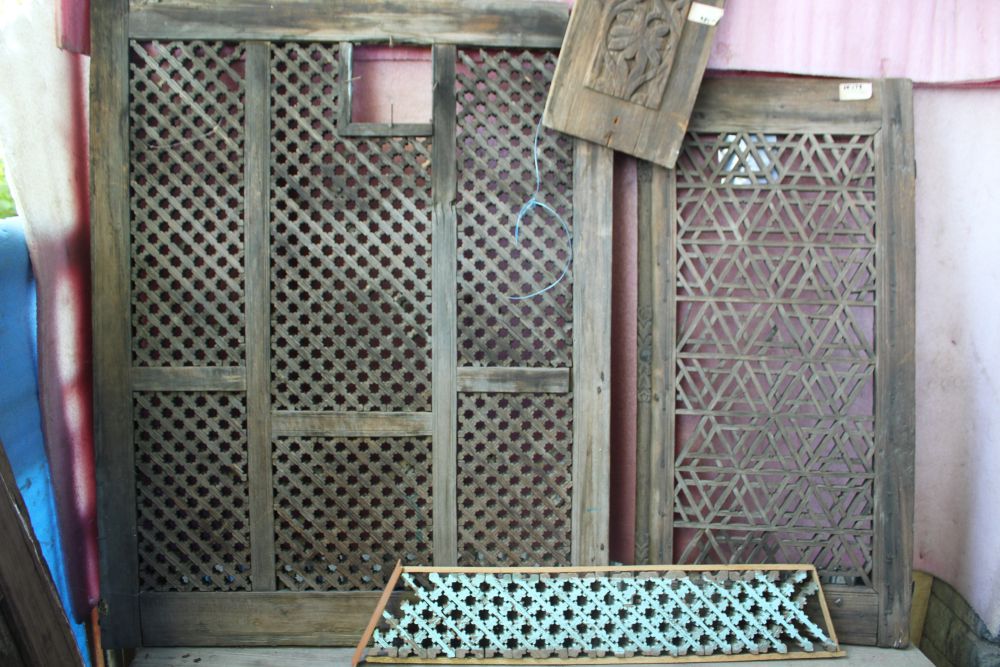 Many of the old manuscripts in the museum came from Bano’s grandfather who had a rich collection of books on Kashmir’s political struggle dating back to the 1940s. “Much of that resistance literature was lost and dumped below bridges as those days police would raid houses, and out of fear people would hide those books,” Bano had said.

The chief minister Mehbooba Mufti expressed her condolences over Bano’s demise, saying that the “relentless efforts put in by late Atiqa Bano to preserve the past heritage and culture of our society is noteworthy and worth emulating.” This was followed by a host of tributes by different state ministers and bureaucrats which were high on rhetoric. However, when Bano was alive, she had a difficult relationship with the government authorities. She told me that the concerned government authorities didn’t care much about extending support or help towards better preserving and showcasing hundreds of artefacts and rare manuscripts she’d collected in a proper gallery.

“We didn’t receive much support from the government,” she told me last summer, disappointed by the lackadaisical attitude of concerned authorities she had approached several times to support her in her cause. “Whatever I have collected or done for the museum is all due to my personal efforts and those of my colleagues and friends.”

She had wanted some technical support from the concerned government authorities so that they could properly preserve hundreds of old manuscripts in Kashmiri and Persian language which were shelved in her museum library. But the authorities were not forthcoming to extend the much needed technical support. “If we are not able to maintain and properly preserve these manuscripts that I’ve painstakingly collected over the years, all that valuable knowledge of our past will be lost.”

All the old artefacts, manuscripts and wooden items she had collected in her museum needed proper preservation by specialists which the government could have provided. She was unable to get technical staff for better preservation of old manuscripts and others items she was struggling to properly preserve in the museum for a longer period. She had on several occasions requested the concerned officials of the department of archaeology to visit the museum and see how they could extend some support, “but they never get time for such things,” she told me.

She was also disappointed by the concerned officials of tourism department who, she said, didn’t put her museum on the tourism map of Kashmir so that more people could have known and visited her museum.

Despite all the limitations and meagre resources, Bano did whatever she could to collect and preserve all the artefacts she had gathered over the years. She wanted the museum to be taken care of even after her death. She wanted it to become a mega repository of the rich cultural heritage of Kashmir. “We hope all these artefacts collected here will ultimately help the world to have a better understanding and appreciation of the rich, unique and diverse culture of people of Kashmir,” she had said.

When I first visited Bano’s private museum of artefacts and manuscripts in 2009, in spite of meagre finances and little space, she had no plans to retire from her work even years after her retirement from the government education department. She wanted to devote many more years, as she did later, to expand the museum, collecting more artefacts, ready to go door to door, requesting people to hand over their old objects and manuscripts she could help preserve in her museum. “Individuals can do a lot at their own level to preserve their heritage,” she’d told me then.

It remains to be seen if the government authorities will now do what they failed to do while Bano was alive: extend technical support to better preserve the rich collection of cultural heritage left behind by her, without compromising on the independent, citizen-centric character of her museum.