Ancient Greeks Purged Cities of Diseases – And The Most Vulnerable Suffered

Social distancing can only be done by those who have jobs that provide them with paid sick leave or the flexibility to work remotely. 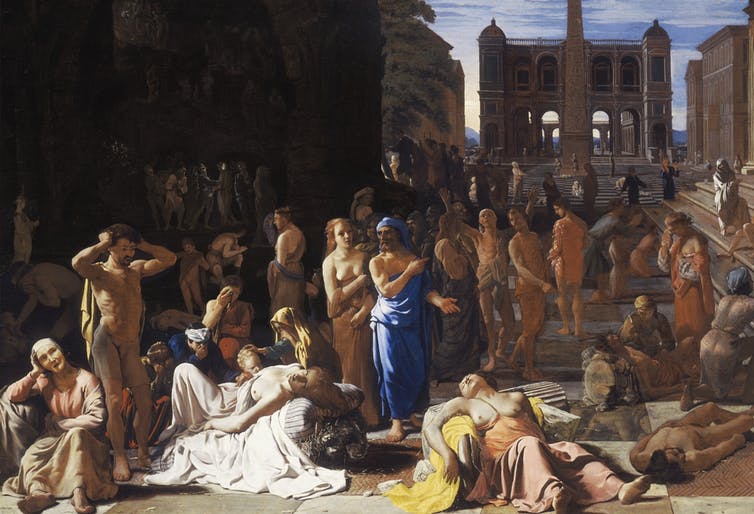 With the spread of the coronavirus, the world is becoming pointedly aware of the extent to which human beings are interconnected. The rapid spread of the virus has highlighted how much we are dependent upon one another, not just for basic biological needs, but also for our sense of belonging and even commerce.

There’s nothing novel about this level of interdependence.

As historians of early Christianity, we know that from the sixth century BC, people in the ancient Greek city-state, or polis, were acutely conscious of this dependence. They dealt with disease spread as a result of living in close quarters.

The intimacy of human interaction meant that the city was seen not just as a community of co-dwellers, but as a kind of body. The Greek city-state, just like the human body, was protected by an outer layer.

The socially marginalised were most at threat when that body came under attack from disease – something that’s shared in the situation today.

The city as a body

For the city-states, the boundary was the city walls. Patrolling who entered the body was important for cities as well as its people.

The way people thought about protecting the city-states was much the same as they envisioned defending the body from diseases.

If a city had suffered a disaster, such as a famine or a plague, like a body, it needed to be purged or cleansed with blood or fire.

The way to purify the polis was a ritual known as the “pharmakos.”

The most detailed example of this ritual is found in fragments of a work by sixth-century Greek poet Hipponax, who lived in Colophon, a city in Asia Minor – modern-day Turkey.

Often two people were selected, one male and one female, to serve as representatives of each gender. Later myths describe how those selected were usually society’s elite – kings, princes or virgins – who were to be sacrificed.

But the reality was very different. Modern-day surveys of the phenomenon have concluded that the person selected was usually a prisoner, perhaps a criminal or perhaps a prisoner of war, a slave, a person with a disability or a social outcast. They were often described, for example by the 12th-century Byzantine poet, John Tzetzes, as deformed or excessively ugly.

The playwright Aristophanes writes in “Knights” that they were “exceedingly low-born, penniless, and useless.” Anonymous ancient commentary on this passage suggests that it was those “mistreated by nature” that were targeted for the rituals.

This person would be fed with the poor-quality food of slaves. He or she would then be beaten with twigs from a wild fig tree and driven out of the city.

In some cases, the pharmakos victims were not only beaten and exiled, but they were also killed. The second-century AD author Philostratus tells us that in one outbreak of plague in Ephesus, a beggar was stoned to death.

It was believed that this ritual expulsion of the pharmakos served to cleanse the city from the famines or plagues that afflicted it.

According to the classicist Jan Bremmer, rituals like this took place throughout the Greco-Roman world.

What is noteworthy is that at its root, the meaning of the Greek word “pharmakos” is “drug,” either a healing remedy or a poison. It is unclear to modern scholars whether the person designated as a pharmakos was viewed as a poison and the root of the city’s problems or if they were seen as the city’s cure.

In either case, the word pharmakos describes the ritual in explicitly medical language.

This dual nature of the pharmakos is in keeping with ancient medical understandings of drugs as being extremely powerful and having the ability to both kill and cure.

This account of the Greek polis shows us that the protection of the body of the city-state depended on the sacrifice of the socially downtrodden, which has parallels with the situation today.

The most effective way of remaining relatively safe from the coronavirus is practising social distancing. But that can be done only by those who have jobs that provide them with paid sick leave or the flexibility to work remotely.

For the homeless, hourly wage earners and some others, this is not an option. In China, rural migrant workers, who already faced financial pressures, are now unable to find work in major urban areas because of fear that they might be carrying the virus.

In the United States, the poor are most susceptible to the most negative consequences of a public health crisis. They are also the ones most likely to face increased inequalities as a result of the pandemic.

Today’s escalating public health emergency invites us to think critically about social values that many of us might think we had left in the past – although they exist very much in the present.