Why Young, Overworked Doctors Are Protesting Outside the Union Health Ministry

For the 11th day now, doctors have been protesting outside the Union health ministry in Delhi demanding the government begin counselling 50,000 PG students asap. 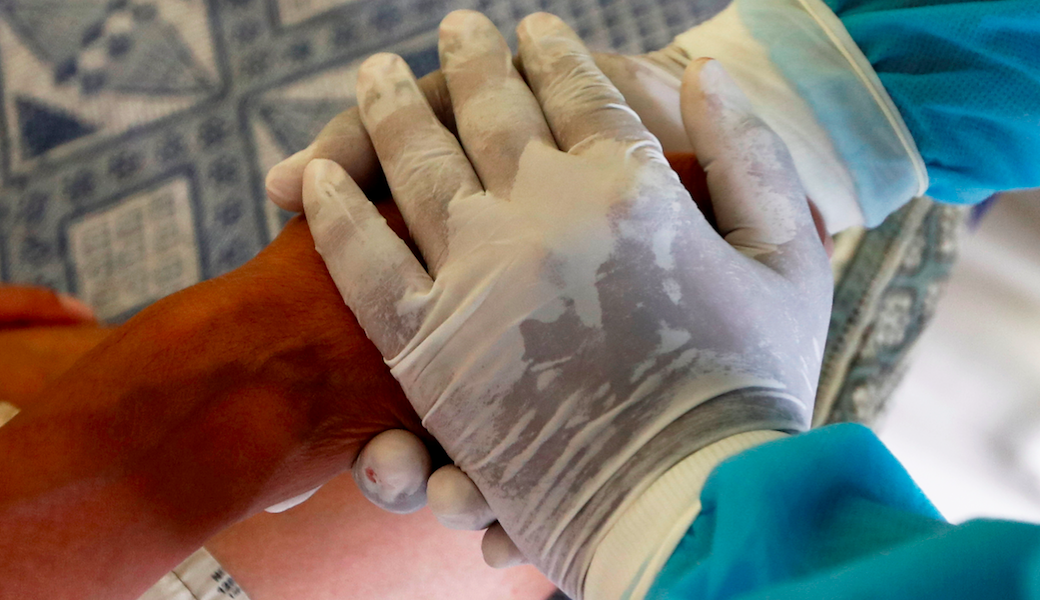 A doctor inspects a patient suffering from coronavirus disease (COVID-19) inside a classroom-turned COVID-19 care facility on the outskirts of Mumbai, India, May 24, 2021. Photo: Reuters/Francis Mascarenhas

New Delhi: As the world is grappling with impending outbreaks of the omicron variant of the novel coronavirus and countries are pulling out all stops to prepare their healthcare infrastructure and supplies, something is happening in India that no country could want at this time. Young doctors have been protesting in front of the Union health ministry’s office in the national capital for 11 consecutive days now.

They have been voicing their demands in multiple fora from November and were at the protest as well: that the government proceed with academic counselling for the admission of 50,000 MBBS doctors who had passed the postgraduate National Eligibility Entrance Test (NEET-PG) conducted in September this year. The counselling is the last step before these students are admitted in medical colleges for further study and care work.

The NEET-PG is conducted by the National Board of Examinations that comes under the Union health ministry.

After getting past the postgraduate exam, they join as junior residents for a three-year period. In this time, a major part of their training involves treating patients in emergency departments, providing out-patient department services and caring for hospitalised patients. But because their progress to junior residency has been halted, India’s healthcare workforce is currently missing 50,000 crucial workers, which in turn further stresses those already on the frontlines.

Normally, the NEET-PG entrance examination is conducted in January, but the pandemic this year forced it to be delayed to September. And normally, the academic counselling gets underway by March every year, but this year, the government said it would be held in November. So the delay in counselling these students is in addition to the eight-month delay brought on by the late exam.

While the protestors’ demands are legitimate, it so happens both they and the ministry are on the same page. The ministry has also said that it is worried about delayed counselling and the consequences for the students. The deeper problem is a lack of coordination between various ministries, a shortage of willingness to ensure coordination or both. And so, there seems to be no end in sight.

On December 25, the Federation of Resident Doctors Association issued a statement saying “resident doctors across the nation will be forced to go forward with a mass resignation” if their demands aren’t met “at the earliest”.

Understanding how this situation arose requires us to start with a government notification – to implement a 10% quota in medical seats for candidates belonging to economically weaker sections (EWS) of the unreserved, or general, category. The Government of India had passed a law through Parliament in January 2019 to this effect.

To qualify under the quota, a candidate would have to belong to the general category and whose annual family income shouldn’t exceed Rs 8 lakh.

Multiple political leaders, activists and social groups quickly challenged the law in the Supreme Court, in March 2019, questioning its constitutional validity, among other things. After multiple hearings, the apex court referred the case to the Constitution Bench, where it remains pending.

Two years later, in July 2021, the National Testing Agency (NTA), which comes under the department of higher education of Union education ministry, issued a notice saying the government intends to implement the quota from 2021-2022, even though the Constitution Bench is yet to deliberate on the matter.

This decision prompted one NEET-PG aspirant, who had qualified to take the exam this year and had been eligible for counselling, to approach the Supreme Court to challenge the NTA notification. The student’s primary challenge was that if a case pertaining to the validity of the law was already pending with the highest court, the government shouldn’t implement the law.

The Supreme Court heard the second petition on October 21, and asked the government how it had arrived at the Rs 8 lakh ceiling for EWS reservation. Since the same ceiling is used for the significant ‘Other Backward Class’ reservation, the court also asked the government if the latter was trying to create “unequal equals”. In a bid to placate the court, the government said the NEET-PG counselling wouldn’t begin until the court decided on the validity of the law.

In the next hearing, on November 25, the solicitor-general, Tushar Mehta, spoke for the government when he said it would constitute a three-member committee to “revisit the criteria” for EWS reservation and that counselling wouldn’t commence until the committee filed a report.

At one point in this hearing, Justice D.Y. Chandrachud asked the solicitor-general if the government would like to delay the quota’s implementation until next year, since holding counselling sessions back would affect a whole year of study. But the solicitor-general insisted on taking the committee route. The court then set the next hearing for January 6, 2022. 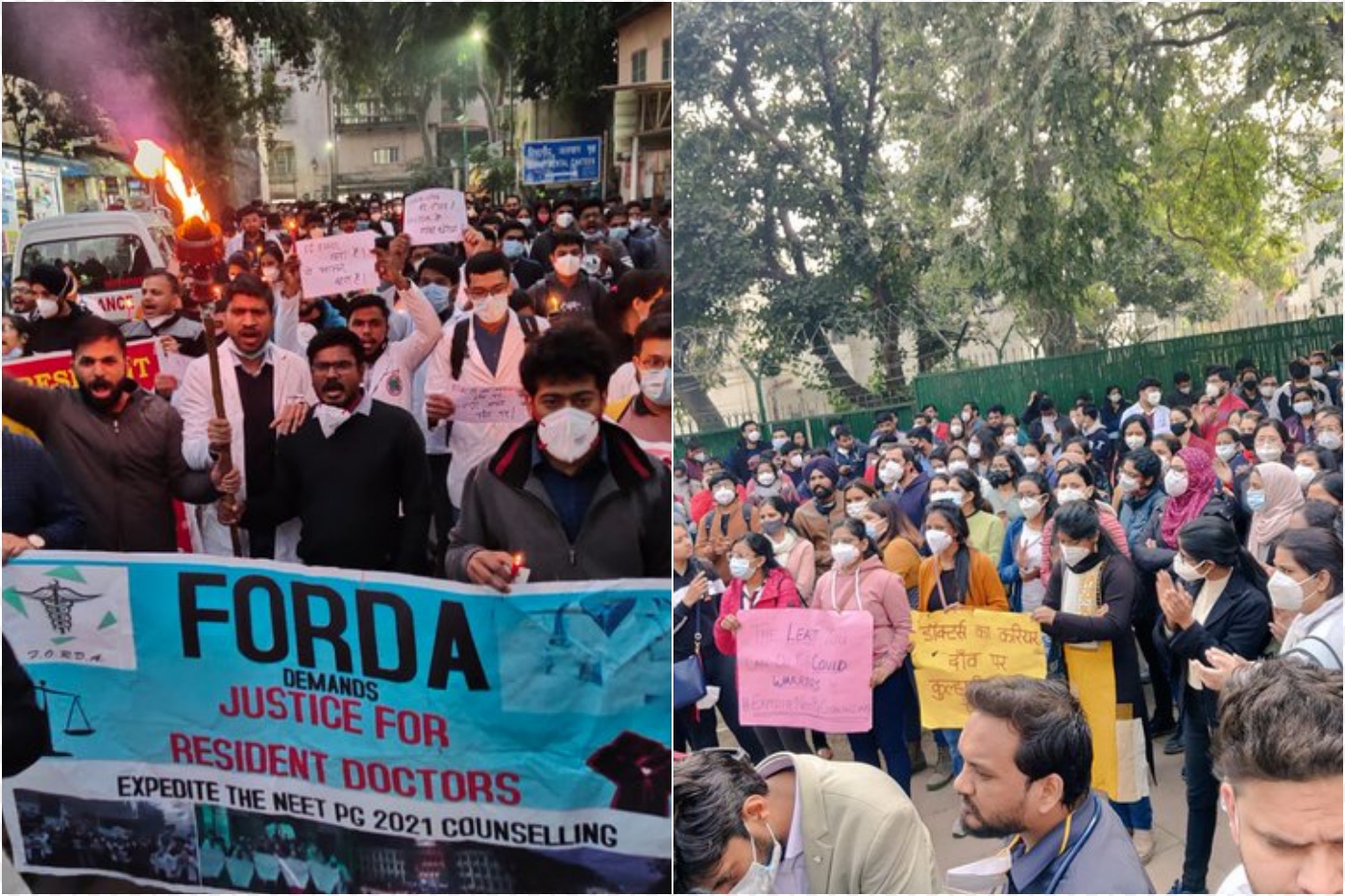 Doctors protesting against the delay in counselling, in Delhi (left) and Jaipur. Photos: Banjot Kaur and FORDA/Twitter

After this exchange, the Union social justice ministry constituted the three-member committee. The Wire Science wrote to ministry officials asking about the committee’s precise terms of reference and a deadline for the report, but didn’t receive a reply.

Meanwhile, the Union health ministry shot off a letter to the law ministry, where the solicitor-general works, on December 6, saying it should approach the Supreme Court to proceed with counselling because further delays would have dire ramifications. The letter, a copy of which The Wire Science possesses, says:

“Due to the stay on the complete counselling process the plight of lakhs of students is at stake. Any further delay will lead to a zero year.”

The letter goes on to say:

“Also, considering the current pandemic situation [when] there are no first year [PG] students in the hospitals and the requirement of the first year doctors is essential and inevitable to reduce the burden of second and third year [PG] doctors as well as to treat the patients as the pandemic is still continuing” (sic).

That is, the government’s decision threatened to waste an entire academic session for doctors, to hurt their careers and to bottleneck their entry into the Indian healthcare system. This is what the protesting doctors have been saying as well.

The Wire Science asked both the Union health and law ministries about what happened after; neither has responded thus far.

Two Rajya Sabha members, M. Shanmugam and Vaiko, both from Tamil Nadu, had asked questions about the EWS quota in the last session. In response to one of their questions, social justice minister Virendra Kumar said on December 15, “The annual family income of Rs 8 lakh to identify EWS beneficiaries was fixed after a detailed study.”  Note that the same ministry has now constituted a committee to reinvestigate this ceiling.

Deepak Baij, the Lok Sabha MP from Bastar, had asked a similar question in the lower house of Parliament in its last session. In his reply in this case, Kumar refuted the premise that the government had sought to equalise OBC candidates and general-category candidates by fixing a common income ceiling. In his words:

These two responses by Kumar suggest the government doesn’t see anything wrong in the way it has formulated and sought to implement the EWS quota. This then renders its decision to constitute a three-member committee to reexamine the eligibility criteria for the EWS quota more confusing.

Eminent doctors around the country have also wondered aloud as to why the government has insisted on pushing an idea that its own actions suggest it hasn’t thought through. Dr Sanjay Nagral, a surgeon practising in Mumbai, told The Wire Science, “The decision to implement a quota, when the case regarding that is already pending, seems like a political move that was made to grab eye-balls.”

Meanwhile, the doctors’ protests continue unabated. Rather, they have intensified, as those outside the health ministry in the national capital have been joined over the last few days by doctors from all medical colleges in the city. Similar protests are on in Agra, Bhopal, Chandigarh, Imphal, Jaipur, Prayagraj and other cities.

“I imagine we are short of about 250 doctors in our hospital itself,” said Dr Sonal, a junior resident at the Safdarjung Hospital Medical College. “What a toll would it be taking on us?”

According to her, junior residents are expected – if not forced – to dedicate 80-90 hours a week for hospital care, versus the stipulated 48 hours a week.

“In one unit of our department’s ICU, 10-15 patients are there, and most of them are on ventilators,” said Dr Manya Gupta, a second-year junior resident at the same facility as Dr Sonal. “In normal circumstances, these patients would be divided among three junion residents. Now there are only two.”

Dr Rahul, a junior resident in the surgery department of Ram Manohar Lohia (RML) Hospital, agreed with Dr Gupta: “It is a no-brainer that overworking adversely affects the quality of our work.”

(Both Sonal and Rahul wished to be quoted only by their first names.)

The Wire Science visited RML Hospital on the first day of the doctors’ dharna outside the health ministry. All the admissions counters had notices pasted on them – that its doctors were on strike. Since resident doctors manage a chunk of hospital care-work and they were away from their duties, the medical college faculty members were managing things. “Since there was no fresh first-year batch of junior residents this year, the batch that came last year is still doing the work that the first year batch is supposed to do,” said Dr Sarvesh, a senior resident in the hospital’s orthopaedic department. “And not learning and doing what the second-year batch would do. Their learning is thus hampered.”

The agitating doctors also said they have hardly had time to pick up their books – much less be able to write papers and theses.

“Since time immemorial, resident doctors have been treated like bonded labour. On top of it, a default system has been put in place where the burden of managing hospitals has largely been put on them. The top-down, hierarchical approach has been the bane [of resident doctors] for a long time.”

“And this crisis plays out all the more in situations such as these,” he added.

Dr Gurpreet Singh, a senior resident at the Safdarjung Hospital Medical College, said the absence of one first-year batch will have a spillover effect as other batches won’t be able to move forward. “If junior residents don’t pass out [in time], I can foresee that even the admission for senior residents would be affected,” he said.

The Indian Medical Association has also appealed to the government to intervene urgently, warning in a December 23 statement that if the issue isn’t resolved asap, it will be “forced to adopt direct democratic participation along with the resident doctors”.

“We don’t have any opinion on reservation. That is for the government to decide. But if there was no proper homework done, or it requires more consultations, don’t hold the counselling to ransom. Start counselling and think about the quota next year.”

This is what Justice Chandrachud suggested in the November hearing as well.