Egypt is the sole country with a higher undercounting factor than India. But India undercounted the most in absolute terms. 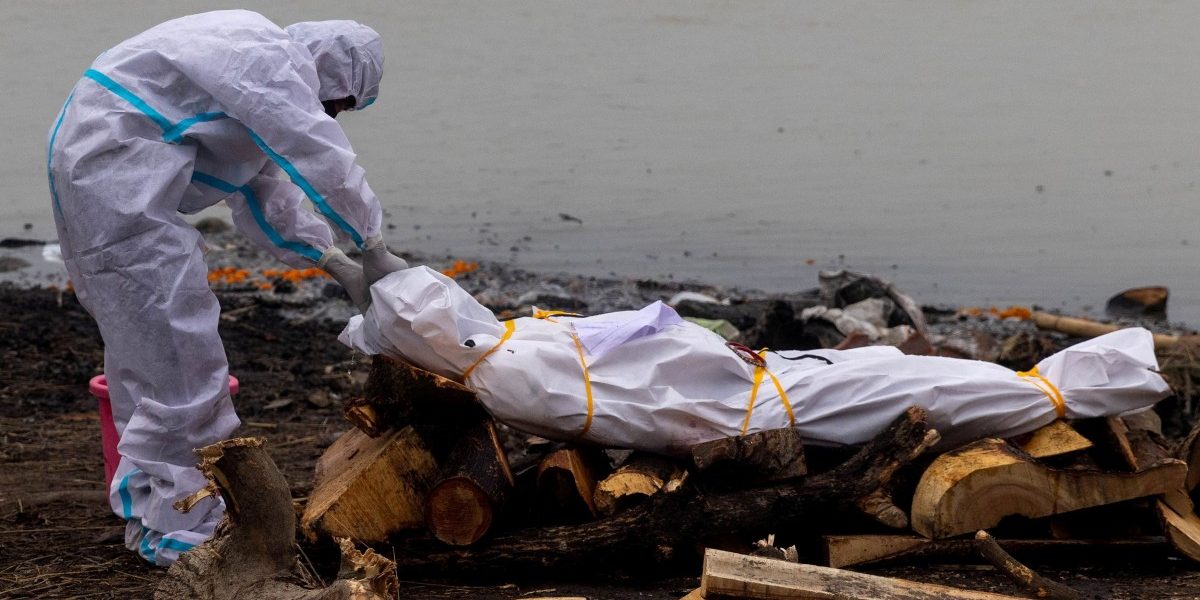 A man wearing a protective suit touches the body of his relative, who died from COVID-19, before his cremation on the banks of the river Ganges at Garhmukteshwar in the northern state of Uttar Pradesh, May 6, 2021. Photo: Reuters/Danish Siddiqui

New Delhi: India’s COVID-19 death toll is almost 10 times its official tally, and the country is estimated to have had the highest number of COVID-19 deaths until December 2021 – 4.7 million. This is one of the conclusions of the much-anticipated WHO report on the world’s COVID-19 excess death estimates.

Of its 4.7 million deaths, 0.83 million (17.65%) occurred in 2020, according to the data; the rest were in 2021, as a result of India’s devastating second wave driven by the delta variant. As such, the trajectories of India’s official COVID-19 death toll and the estimated toll based on statistical models, from January 2020 to December 2021, are highly divergent. 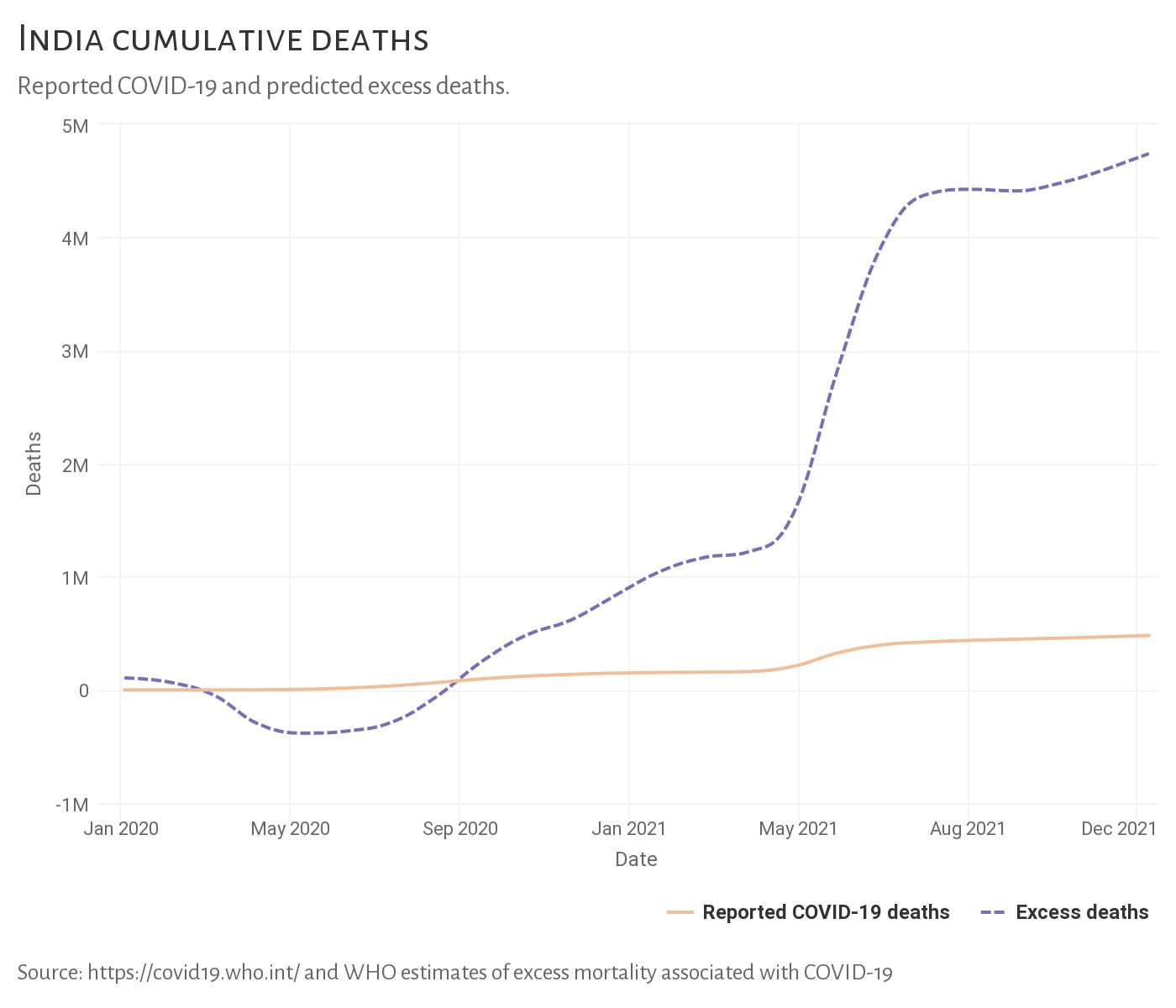 The global undercounting factor stood at 3x. The three age groups with the most deaths were those aged 60-69 years, 70-79 years and 80+ years. Males accounted for 56.6% of all deaths – a split that reflected that in India as well. Note, however, that health data for women in India is unlikely to be accurate.

The WHO has also said that its figures aren’t final; the pandemic is still ongoing.

They voiced similar objections but deemed it necessary to say them separately. Also, even as the WHO’s press conference announcing its findings had been underway, the Union health ministry published a rejoinder to the estimates.

One key argument common to these three policymakers was that the WHO’s estimates were based on modelling studies and that they shouldn’t have been.

This is disingenuous. Modelling is an important tool with which researchers fill gaps in real-world data. And in India, death registration data hasn’t been available from all states at the same time, while also being up to date and representative.

If such data did exist, estimating excess deaths would have been a relatively simple exercise. It is the difference between registered deaths due to all causes in a pandemic year and the number of deaths that one expects to occur in that year if there hadn’t been a pandemic, estimated based on previous years’ data.

But such data doesn’t exist – so the need for models.

In India, the source of death registration data is the civil registration system (CRS), whose numbers the Registrar General of India’s office issues. CRS includes deaths due to all causes, so it is also known as all-cause mortality (ACM) data.

On May 3, the Registrar General released ACM data for 2020, which is only one of the two pandemic years, and only two days before the WHO was to publish its own report.

The health ministry press release of May 5 also claimed that it had shared this ACM data with the WHO when the latter had been preparing its estimates. “Despite communicating this data to WHO for supporting their publication, WHO, for reasons best known to them, conveniently chose to ignore the available data submitted by India,” the release reads.

But in the press conference, the WHO’s assistant director-general of data, analytics and delivery for impact, Samira Asma, said that the body learned of India’s official ACM figures only two days ago.

“As you know, India also released the 2020 estimates two days ago, and we will continue to have these conversations. In our next update, we will also include the data that India has provided,” she said, replying to a query from The Wire Science.

Second, even if India had availed its 2020 data sooner, it is yet to release the data for 2021. This data is crucial because all independent estimates of India’s COVID-19 death toll record a big jump in the number of deaths in this year.

“In the absence of complete and high quality data from [some] countries, of course, we had to rely on a modelling approach,” Somnath Chatterji, senior advisor at the department of data and analytics, WHO, said in the presser.

The WHO commenced its exercise to arrive at its newly released estimates a year and a half ago. According to its methods report, India belongs to a small set of those countries whose national ACM wasn’t available at the time. “We instead have ACM data from [India’s states], with the number of regions with data potentially changing over time.”

Further, according to the report, ACM data was available only for 17 states for the period of January 2020 to December 2021.

According to Chatterji, WHO researchers eventually used the following data distribution to conduct a “standard” modelling: “The information was either reported directly by the states through official reports and automatic vital registration, or by journalists who obtained death registration information through Right To Information [RTI] requests.”

In his statement, AIIMS chief Guleria said, “Data that WHO used is [based] more on hearsay evidence – what’s there in media or unconfirmed sources.” But according to the WHO, media reports were based on RTI applications while the other data originated with state government officials. So unless Guleria is invalidating either of these sources, the basis of his argument remains unclear.

Bhargava and Paul also took exception in their respective statements to using data from media reports. None of the individuals explained what was wrong with the data.

The WHO’s Chatterji also said that they had shared their input data with the respective countries, together with documentation on the modelling method and the programming code used. The idea is that countries should be able to “rerun these models to generate estimates” and compare their findings with those of the WHO.

The Indian government has, however, not published or publicised the results of a replication study, if it conducted one. As mathematician and disease-modelling expert Murad Banaji wrote, the absence of evidence of this exercise has also undermined the Indian government’s issue with the WHO’s findings.

In fact, in a statement coinciding with the release of the CRS data, Paul had accused modelling exercises in general of producing only “absurd” estimates.

Instead, in a previous press release aimed at the WHO’s estimates, India had objected to the country being classified as ‘tier II’ – the countries with incomplete data.

All of Paul, Bhargava and Guleria have also insisted that India has a “robust” death registration system. But the CRS data released recently itself admitted that various states couldn’t hold important meetings at the district and block levels and had to postpone training programmes for health officials thanks to the pandemic.

The WHO’s estimates aren’t the first to undercut the Indian government’s claims. It joins a coterie of studies that have all reached similar conclusions: that India has had 3-5 million deaths during the pandemic, and not the measly official figure of 0.5 million.

Nonetheless, the WHO is perhaps the most weighty entity to challenge the government’s narrative – carefully curated by delaying and suppressing data, vexing public dialogue on the topic and twisting definitions – that India’s COVID-19 death toll is really stupendously lower than the country’s anaemic public health system, the ferocious second wave and the government’s apathetic response to it suggest.

The Indian government is also unlikely to back down, given the health ministry’s conviction, on display in its May 5 press release, that the new estimates “may stretch to the limits of absurdity”.