When Everything Else Failed Them, These Women Found Hope in Baking

Run by women suffering from poor mental health conditions, Crust and Core cafe in Kolkata, an NGO initiative, is helping some of the homeless ones find a purpose in their lives. 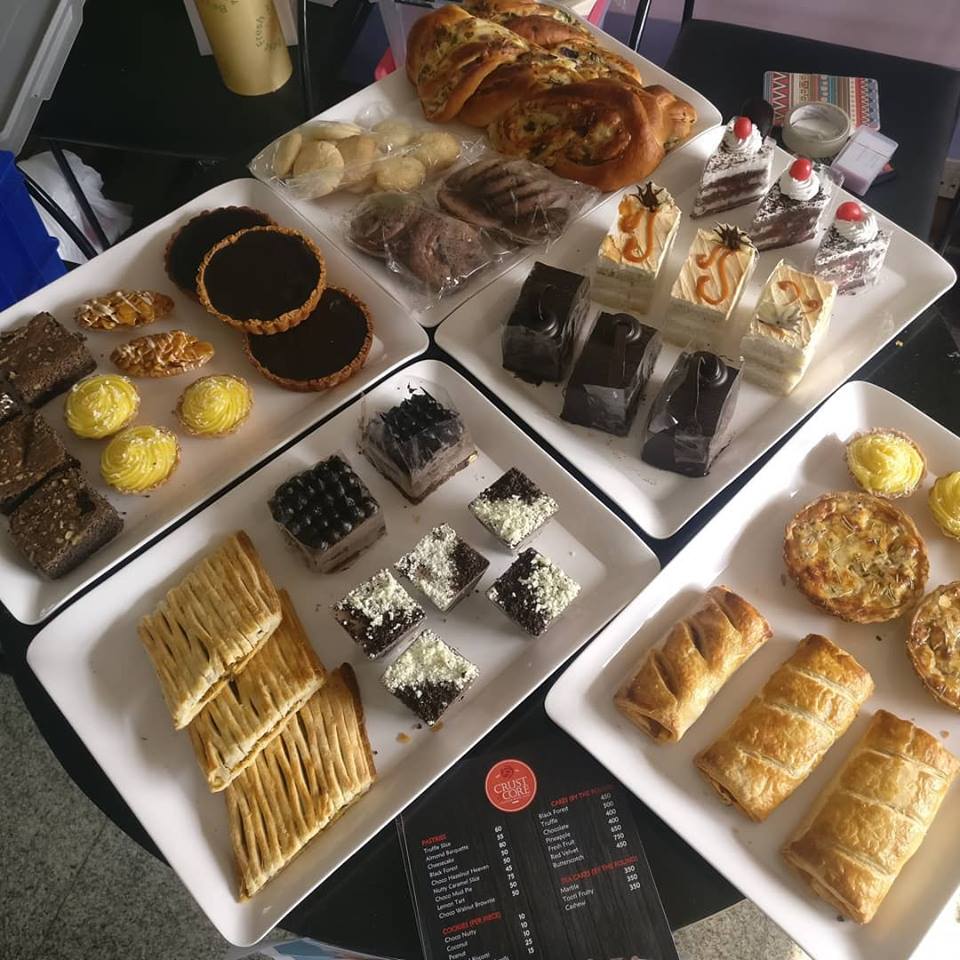 Most of the abandoned women working in a cafe in Kolkata say they have regained confidence after learning baking. Credit: Instagram/Crust and Core Rinku Das organises bakery items at the display counter inside a quiet cafe in the by-lanes of Chetla in South Kolkata on a Tuesday afternoon. Once the order is placed, she arrives at the table with two tall glasses of virgin mojito. She takes a moment to readjust the straws and comes back in some time to ask if the drinks are “well made”.

From the sound of it, Crust and Core may seem like a regular city cafe where Rinku is carrying out her waitressing duties. Having suffered an abusive marriage and repeated homelessness, Rinku, who is in her late 30s, was found wandering in the streets of Kolkata. She was brought to Sarbari Shelter Home, where she was diagnosed with schizophrenia. One and a half years have passed since. Now, Rinku works in the cafe run by women suffering from poor mental health conditions.

The cafe was opened in February at the initiative of an NGO, Iswar Sankalpa. Established in 2007, the NGO works towards social inclusion of homeless and urban people with psycho-social disabilities. It runs outreach programmes to identify people with mental health illness and also runs shelter homes – one for women and the other for men– to rehabilitate them. Iswar Sankalpa carried out an assessment of the women’s core interest areas at the Sarbari shelter home before starting the bakery project. In-house training was held and bakery lessons imparted for the nine women who came on board.

People with mental illnesses are often seen as untidy, dangerous, and dependent. They are also deprived of social opportunities, observes the National Mental Health Survey, 2016. This project aims to address the stigma around mental health conditions and encourage these women to appear in a public space like a cafe and interact with customers. “The overarching theme is to facilitate social inclusion. Our aim is to equip them with a source of livelihood beyond the stay of the home and make them self-reliant,” says shelter supervisor Subholina Chakraborty.

Gradually, Rinku is regaining her confidence to lead an independent life “some day soon”. “I want to have my own house. I want a plot of my own… Here, I like being involved in the kitchen work. I bake biscuits, cookies and also make cheese,” she says.

At the helm of running the cafe smoothly is the other member – Jharna Saha, 51. Other team members point out that she is the “expert”. Jharna, however, quickly brushes off the compliment, “I am still far from baking perfectly. Sometimes, I forget a few steps. But I can follow instructions well.” Jharna recounts her time as a bar dancer in Mumbai. What followed was a violent marriage where she was physically abused for years. The memory of how she returned to Kolkata is a haze. The Kolkata police found her loitering near Sealdah railway station and brought her to the shelter home where she was found suffering from schizophrenia. Jharna is aware that the severity of the condition may relapse if she ignores the medication. “I still long to go back to Mumbai. This time, I will start life afresh.”

The mental health burden of West Bengal is huge — it has the fourth highest prevalence of mental health disorder at 13%, according to the National Mental Health Survey, 2016. The survey was conducted in 12 states. States like Manipur, Madhya Pradesh and Punjab had worse prevalence of mental health conditions at 14.1%, 13.9% and 13%, respectively. The prevalence of psychosis and other severe mental health illness, including schizophrenia, was the highest in West Bengal at 1.26%. In most other states in the survey, it ranged between 0.3% to 0.5%. The pattern shows that the treatment gap in the states ranges between 70% to 92% for different disorders, according to this survey.

In a lot of cases, homelessness is a consequence of mental health illness, says Dr Jai R Ram, consultant psychiatrist, Mental Health Foundation. This is compounded by discrimination and stigma that the person faces in society. Neglected and isolated, they wander away from home or are abandoned by their family members, he adds.

At Sarbari shelter home, most women have similar stories to tell. Whipping the cream for lemon tart at the bakery’s base kitchen at the shelter home, Shampa Shaw, 35, says she rarely “thinks”. After being repeatedly physically abused by her husband and mother-in-law, she was found in a homeless condition. Shampa suffers, too, from schizophrenia. An emotional yet resolute Shampa says she would continue to fight like she always has. But the toughest part is not being around her three children.

Twenty-five-year-old Polly George, who suffers from schizoaffective disorder, says she would want to go back home but only “briefly”. “It is a tiger’s cage. I like to make cheese here,” she says. According to the home authorities, Polly has been homeless several times with her parents refusing to take her responsibility. A victim of domestic violence, she sought refuge in ashrams across the country before being housed in the current shelter home. 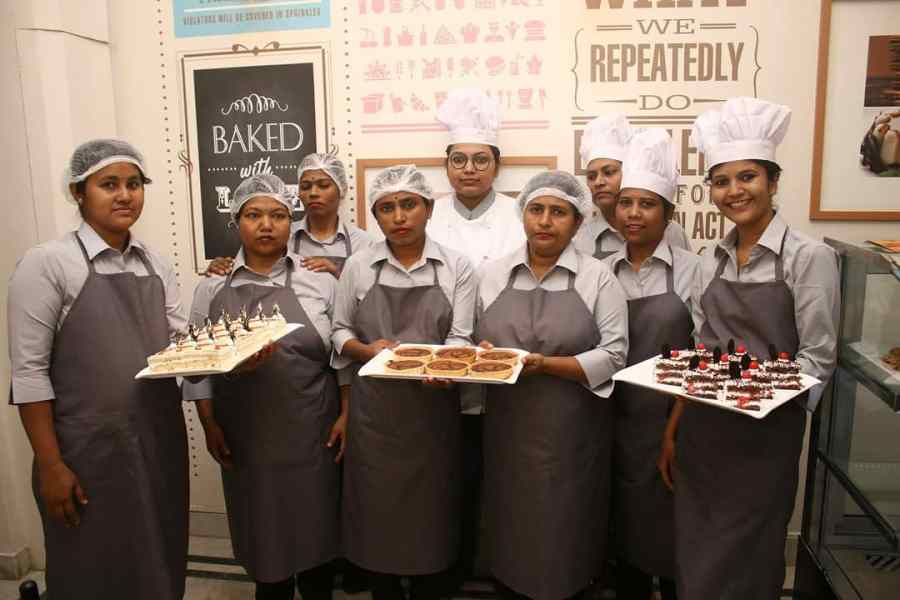 Iswar Sankalpa is working for social inclusion of women with mental health disorders. West Bengal has the fourth highest prevalence of such disorders at 13%, according to the National Mental Health Survey, 2016. Credit: Facebook/Crust and Core

For Shibani Sinha who arrived in the shelter from Tripura, returning home is on the agenda. But, for now, she wants to focus on honing her baking skills and finishing her education. “I do not remember exactly how I ended up leaving home or my hostel. I stayed in Guwahati station for a few days before I reached Kolkata. I was admitted to a hospital in Howrah before the police brought me here,” says Shibani. The 26-year-old suffers from psychosis. The home authorities are trying to obtain Shibani’s earlier degrees with the help of her neighbour in Tripura to get her enrolled in an open university here. While Shibani’s mother suffers from poor health conditions, her father is housed in a shelter home.

Despite their struggles, these women are “true professionals” now, says Prativa Jajodia, head chef at the bakery. “Their attitude has changed since the cafe was started. They report to the kitchen around 8.30 a.m, wear aprons and get on with the work. I just supervise and monitor their work. They are evolving every day and there are times when we need to motivate them,” she says.

Assessing the project so far, the shelter supervisor says the project has helped these women orient themselves towards facing the reality. While some women are the face of the cafe, the others support the base kitchen work. The women receive a stipend for their work. The project details were explained to the women and their consent taken before the project was started, says Garima Chandak, the project coordinator .

Currently, the home houses 67 women. The NGO is working towards restoring some women with their families. The family response varies on a case-to-case basis. Psycho-education of the families and even neighbours is an essential component of the restoration process, says Barman. A sustained sensitisation programme reduces the chances of the person being isolated once restored. Citing an anecdote, she says one family from Rajasthan was amazed to see the change in a woman who was being rehabilitated at the shelter home. A person with mental health disorder is misunderstood as the family often has no concept of mental illness. “Families often wonder how someone can suffer from mental illness and what the treatment process is.”

A starting point is to talk more about mental health issues and to put out a simple message that mental health conditions can be treated just like fever can be, say psychologists. This will help families identify that a member is suffering from a mental health illness. Currently, there is a lacuna in treatment because of the lack of community mental health programmes, say Dr Ram. “A holistic approach is required to address the treatment gap. There is no synergy among community programmes, government facilities and private services. Each sector is working in isolation.” The efforts to address the ground reality of mental health burden need to be scaled up, he says.

The unique bakery initiative, meanwhile, is helping a few women find a purpose in their lives. Haripriya Koirala, 21, wants to realise her dream career through this project. Abandoned by her maternal uncle in a busy marketplace in central Kolkata, she developed mild mental health conditions. The youngest member in the team, Haripriya skilfully grasps multiple workload in the kitchen. “I make pastries, muffins and cakes. I like to bake as much as I like to eat cake,” she says with a bright smile. She is quite the star in the kitchen and the cafe, say team members. “I want to become a chef in the future,” Haripriya adds.

Ritwika Mitra is a freelance journalist based in Kolkata and was a Chevening scholar at University of Birmingham for 2016-17.