Shahid Jameel says the world's response in the aftermath of the discovery of the Omicron variant has been "emotional", and there has been a lot of speculation about its transmissibility and virus' behaviour. 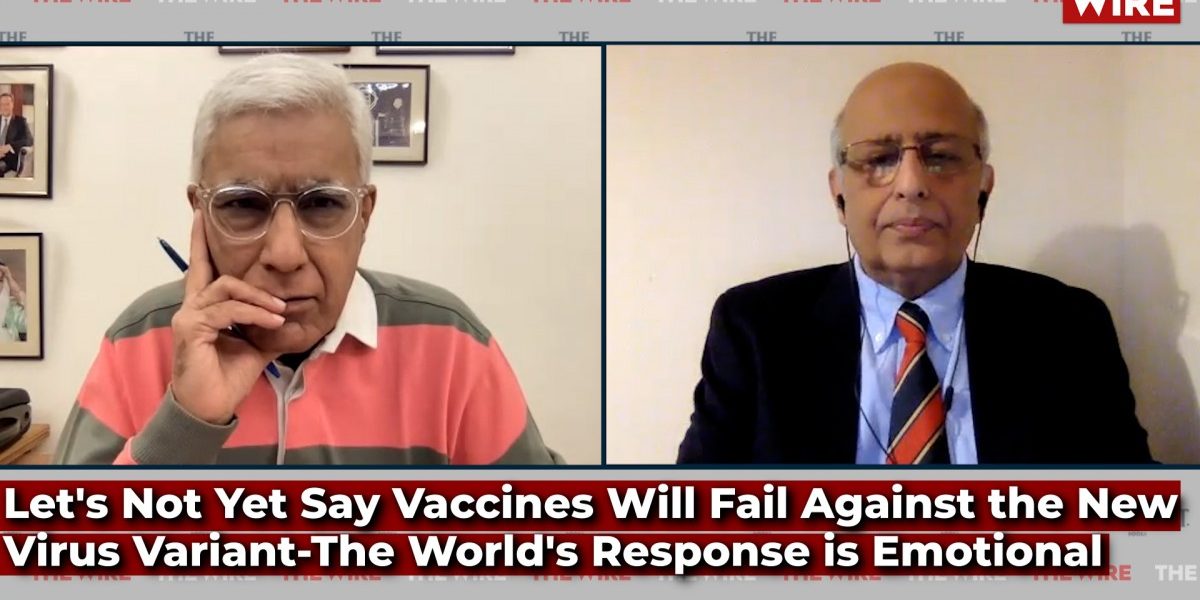 In an interview that will be very reassuring but, at the same time, takes a very different position to the common perception of the new variant discovered in South Africa, called Omicron by the WHO, Shahid Jameel, one of India’s top virologists, says, “There is a bit of exaggeration in the superlatives being used to describe Omicron”.

BBC reports state scientists have called it “horrific” and the “worst one yet”. Shahid Jameel says, “Let us not be guided by emotion, but by data. Don’t jump the gun and say vaccines will fail or it (Omicron) is six times more infectious than Delta. This is all speculation.”

In a 30-minute interview to Karan Thapar for The Wire, Prof. Jameel, who is presently a senior research fellow at Green Templeton College at Oxford University, says, “People are speculating (about Omicron) on a large number of mutations. Viruses mutate all the time.” He says the decision by Britain and other European countries to stop flights from South Africa “is an emotional response”.

In The Wire interview, Prof. Jameel says there are three critical things to look out for as we study the virus’s behaviour and impact. Is it more transmissible? Does it lead to severe disease? Can it evade pre-existing immunity from vaccines?

Answering his questions, Prof. Jameel says it is “too early to know if it will cause severe disease”. He says it is also “too early to say” it will evade pre-existing immunity. For both these, we have to wait. He adds that we probably need to wait three to four weeks for things to become clear.

As regards the question “is it more transmissible?”, he says we have some genome-sequence-based evidence of Omicron spreading faster, but this is only from a small cluster in one district of South Africa. However, he adds, we have evidence of Omicron’s detection through RT-PCR tests, based on the S gene dropout, from the rest of South Africa which suggests Omicron may have spread more widely. But RT-PCR detection is not full proof and needs to be corroborated and verified by genome testing.

Prof. Jameel says he does not accept a claim made by Tom Wenseleers, professor of Biology and Biostatistics at Ku Leuven University, that Omicron could have a six-fold higher R value than Delta. He says this is speculation. “We just don’t know.”

Elaborating on the claim that Omicron has 50 mutations overall, with 30 in the spike protein, Prof. Jameel clarifies that this is based upon the first 4 or 5 genome sequences. Since then about a hundred more have been done and, he says, the 30 mutations on the spike protein are not present in all of them.

Secondly, he says, of these 30, it’s only 10 in the receptor-binding domain or the N terminal domain that are of critical concern. They do suggest that efficacy could go down, but we don’t know by how much. It’s very unlikely that efficacy will be altogether eliminated. This is why we have to wait and not get emotional or speculative in our response at this stage.

Speaking to The Wire about theories of the origin of Omicron, Prof. Jameel says it’s quite plausible, but very difficult to prove, that it developed in an immunocompromised person, which would have given the virus sufficient time to mutate in multiple ways. He says it would be very difficult to “nail down” this theory unless you can find the person to prove it.

Prof. Jameel says it’s also speculation that the variant originated in a person with uncontrolled HIV. Again, he says it is plausible to say this but difficult to prove.

Prof. Jameel adds there are also some views that the variant may have evolved for a year in an animal reservoir thus suggesting some sort of zoonotic origin, i.e., a transfer from animal to human being.

Finally, Prof. Jameel suggests that the government’s response of strictly screening passengers from South Africa and other countries where Omicron has been found is the right approach, provided it is done effectively and without exception. He says shutting flights from South Africa would be “an emotional response”.

However, he provides a personal example of a friend who told him the other day – the day tighter screening was implemented – of two passengers from South Africa, sitting in the airport lounge in Bhubaneswar, who were not wearing masks and it seemed they had not been tested for Omicron. The passengers admitted they had come from South Africa. Please see the interview for greater details of this anecdote.

The above is a paraphrased precis of Shahid Jameel’s interview to Karan Thapar for The Wire. Though recounted from memory, it is not inaccurate. There is, of course, a lot more in the interview than has been covered in this precis. For a better understanding of Prof. Jameel’s viewpoint, you must watch the full interview.