The Chief Minister had been resisting serving of eggs in a State where about 52 per cent of the children are malnourished, for personal reasons 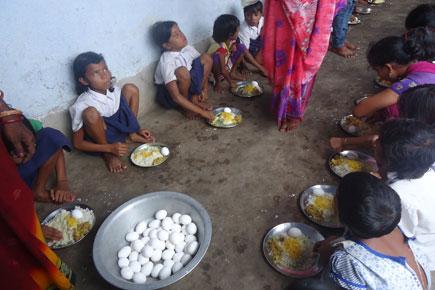 New Delhi: As an expression of protest against vegetarian Madhya Pradesh Chief Minister Shivraj Singh Chouhan’s policy of not allowing  eggs in mid-day meals across the state, the Sahariya children of Shirpura village in Shivpuri district were on Friday afternoon served eggs along with khichri through village contributions.

For a large number of children who turned up to get a boiled egg each in their meal, it was a rare chance to eat the protein rich animal product, which is considered vegetarian by many since it is not always fertilised.

The contribution for the meal came from the village community itself and sounded a virtual bugle of defiance against the Chief Minister, who for personal reasons had been resisting serving eggs in a state where about 52 per cent of the children are malnourished.

The distribution of eggs also proved a great crowd-puller as a large number of enthusiastic children made a beeline for their school on hearing that they would be served eggs during the day. In the meal they were also served khichri (a dish made of cooked rice and lentils) along with bananas for the pure vegetarians. But in a cheerful and charged atmosphere, most of the children opted for the egg.

With the “Sunday ho ya Monday, roz khaenge ande” (Be it Sunday or Monday, have an egg everyday) slogan – coined by the National Egg Coordination Committee, to popularise egg consumption across the country and to promote eggs as a healthy means of fighting malnutrition – being raised every now and then, the significance of the event was not lost on anyone.

In all, about a hundred children from the village participated in the event. They were also accompanied by some pregnant or lactating women. In several villages of Shivpuri, people consider eggs to be vegetarian – almost akin to milk, which is also an animal product – and therefore eggs remain a popular item for many.

Excited at the response to the event, Aarushi Kalra from the Right to Food Campaign, who was present at the venue, said: “It was a revelation to see how excited children were when they heard that eggs were being distributed. A great injustice is being done to them [by denying them eggs in their mid-day meal].”

It is common knowledge that eggs are an excellent source of protein and all essential nutrients, except vitamin C, for young children. But despite the fact that they are also cheaper, safer, more nutritious and easier to procure than alternatives such as milk or bananas, Chouhan had in June shot down a proposal to include either egg curry or boiled eggs in the mid-day meal scheme. He vetoed the serving of eggs in the anganwadis of the three tribal districts of Mandla, Hoshangabad and Alirajpur.

His Principal Secretary S.K. Mishra had gone on record stating “ “It has been a sentimental issue with the CM from Day One. Moreover, there are better, more nutritious options available.”

The proposal was shot down despite the Women and Child Development Department itself suggesting that eggs be served in breakfast to children in the 3-6 age group in anganwadis run under the Integrated Child Development Services (ICDS).

Chouhan, who is now also facing heat in the wake of numerous deaths in the Vyapam scam, has been singularly opposing the idea of introducing eggs in mid-day meals despite several other states  opting for them. Many view this rigidity and resistance as part of BJP’s Hindutva agenda as in several other party-ruled States like Rajasthan, Gujarat and Chhattisgarh too there has been opposition to the serving of eggs even when there was a vegetarian option on offer.

Note: The story has been edited to correct a reference to Karnataka as a state still ruled by the BJP