The Union government may do well to appreciate that getting vaccinated and seeking private health care are two different issues and should not be conflated. 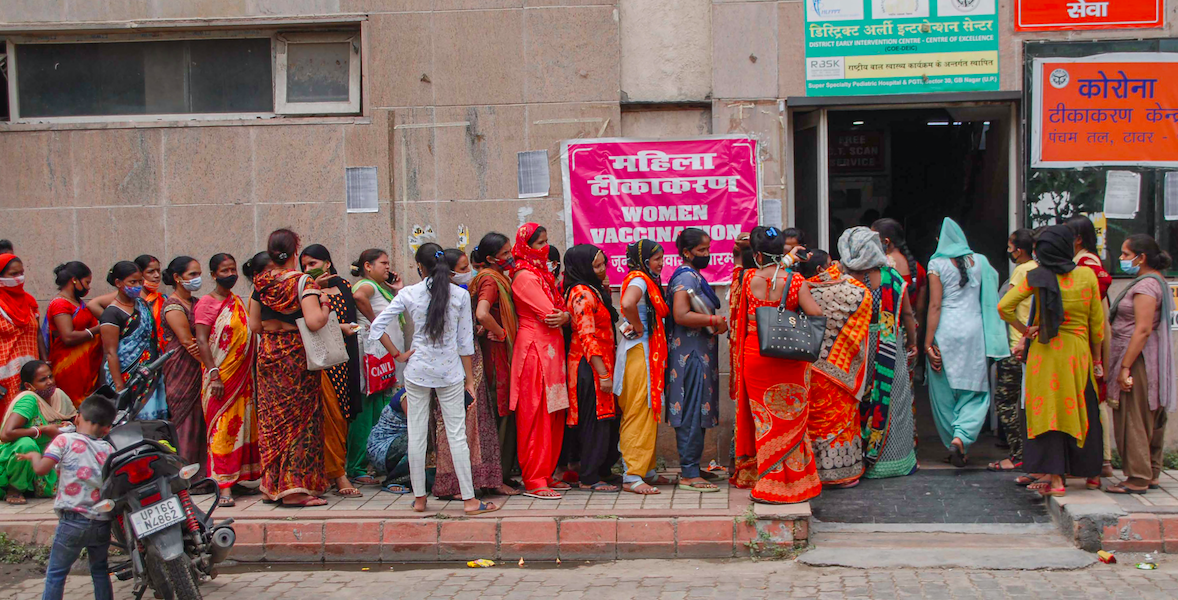 People wait in a queue to receive COVID-19 vaccine dose, at a district hospital in Noida, Friday, July 23, 2021. Photo: PTI

When the Union government partially revised its vaccine allocation strategy on June 7, 2021, from a 50:25:25 ratio to a 75:25 ratio, it had offered a set of justifications to the Supreme Court.

In its second affidavit submitted to the apex court on June 26, the Union government stated:

“…this was the reason of involving private hospitals in the process from the beginning of the vaccination programme so as to give wider reach to vaccination and lessen the stress on government facilities considering the very magnitude of the task ahead viz., vaccinating second largest country in the world…”

“…various experts expressed concerns through articles, interviews and other mediums expressing to continue involving private hospitals in the drive while permitting the manufacturers to decide their charges to be supplied to private hospitals at arm’s length basis and based on mutual agreement. The opinion expressed by experts was based upon the rationale and logic that manufacturers would not have any incentive to augment their manufacturing potential and manufacture more vaccine doses, unless they have an incentive of selling some defined portion of their manufactured vaccines at the rates decided by them, so that they can sell vaccines to the Central Government after cross subsidization…”

Thus, there were three justifications provided to keep the 25% quota for private hospitals intact.

Secondly, keeping a proportion of vaccine doses aside for private hospitals would reduce the burden on public health facilities.

Thirdly, higher prices at which doses are sold to private hospitals would incentivise the vaccine producers to produce and supply more as well as help them to cross-subsidise sale at regulated prices to the government.

At the outset, the policy to retain 25% of the vaccine doses at exceedingly high prices (Rs 1380 per dose for Covaxin and Rs 780 per dose for Covishield) was a reservation of vaccines for the rich. Such a policy was unjust, inequitable and discriminatory; the Supreme Court had mentioned in its interim order in May 2021 that India’s vaccine policy should be just, equitable and non-discriminatory.

Such perversity of design itself warranted a rejection of such a strategy.

Also read: Why Justice Chandrachud’s Line of Questioning on Vaccine Negotiations is Important

As more reports come in from June and July 2021, we now have much more empirical evidence on why the Union government’s policy was erroneous.

To begin with, the Union government itself has admitted that vaccination rates are slowed down due to the 25% allocation for private hospitals.

In sum, the Union government was admitting that the 25% allocation of doses for private hospitals is significantly under-utilised. In fact, the poor demand from private hospitals was actually slowing down India’s vaccination rate.

More recently, the Union minister Piyush Goyal too admitted that private hospitals are failing to pick up their 25% quota of doses. Goyal’s statement made it clear that the Union government was persuaded into the 75:25 strategy not by any reasoning based on public health but by the lobbying of the private sector.

He told a gathering of private sector industrialists:

“You all (in the private sector) demanded and I remember how much you all fought with me and sought that vaccination be opened up for the private sector. Today, you are not even buying those 25% of vaccines (allotted to you)…I remember one industry group said ‘I will do one crore vaccinations’ and another said ‘we will go to remote areas and do it’. Nobody has gone to Bihar, Northeast, Jharkhand and Chhattisgarh to run campaigns to remove vaccine hesitancy and use up that 25% quota…Please also calibrate your actions once you get what you demanded.”

News reports have also started to come in from different states that show poor lifting of vaccine doses by the private hospitals.

A report from Andhra Pradesh noted that “although nearly 35 lakh COVID-19 vaccine doses were allotted to private hospitals in Andhra Pradesh since the beginning of May 2021, only a meagre 4.63 lakh doses of the vaccines have been bought by people”.

In a letter to the Prime Minister, chief minister Y.S. Jagan Mohan Reddy wrote: “The past experience and the demand for vaccines at private hospitals in Andhra Pradesh clearly indicate that such huge quantities of vaccine cannot be utilised by the private hospitals”.

Another report noted that in Tamil Nadu, “of the 1.85 crore doses administered so far, just 5% was at private hospitals”.

Its chief minister M.K. Stalin has written to the Prime Minister asking him to reduce the allocation for private hospitals from 25% to 10%. The Odisha chief minister Naveen Patnaik has demanded that the proportion be reduced from 25% to 5%.

The reasons for poor demand from private hospitals is rather straightforward: high prices.

There is no way a family on or near the poverty line would be able to afford the prices charged at private hospitals. Even among lower middle-class households in urban areas, high prices have depressed demand. There is an additional reason. Private hospitals are now forced to limit their margins at Rs 150 per dose, while it was unlimited under the original “liberalised vaccine policy”. At these margins, private hospitals have shown no enthusiasm in lifting any significant quantity of vaccine stock.

In sum, the 75:25 allocation strategy has been proven to be totally undesirable and a grand failure.

The Union government may do well to appreciate that getting vaccinated and seeking private health care are two different issues and should not be conflated. There is no evidence that the pressure on public facilities is reduced by vaccinations through private hospitals. There is also no evidence that private vaccine producers have increased their supply in response to higher vaccine prices.

The solution is well-known. If 100% of the doses are procured by the Union government and supplied to all Indian for free, the 25% of the doses too can be administered more efficiently and equitably, and without discrimination.