Nearly 79,000 COVID-19 patients were reported in US hospitals as of Wednesday, the highest number yet for a single day, up from about 75,000 on Tuesday. New York: The US death toll from COVID-19 surpassed a grim new milestone of 250,000 lives lost on Wednesday, as NewYork City‘s public school system, the nation’s largest, called a halt to in-classroom instruction, citing a jump in coronavirus infection rates.

The decision to shutter schools and revert exclusively to at-home learning, starting on Thursday, came as state and local officials nationwide imposed restrictions on social and economic life to tamp down a surge in COVID-19 cases and hospitalisations heading into winter.

But eight months after New York City emerged as the nation’s first major flashpoint of the epidemic – its hospitals besieged and streets virtually devoid of human activity – the epicentre of the public health crisis has shifted to the upper Midwest.

Governor Tim Walz of Minnesota, one of several states in the region dogged by the country’s highest case rates per capita, ordered all restaurants, bars, fitness centres and entertainment venues closed, and all youth sports cancelled, for four weeks.

More than 90% of hospitals’ intensive-care unit beds are already occupied in the eastern half of the state, Walz told an evening news briefing, adding: “We are at a dangerous point in this pandemic.”

The action by New York schools, announced by Mayor Bill de Blasio via Twitter, doubtless came as a relief to some teachers, many of whom have expressed fear of being placed at increased risk of exposure to the highly contagious respiratory virus.

But it will bring renewed hardship for working parents forced to make childcare arrangements once more.

“I could lose my job. … I am stuck between bills and my son, and it’s a hard choice. Really hard,” said Felix Franco, 30, a US Postal Service employee who has been on leave recovering from COVID-19 himself since spring and was planning to return to work in two weeks.

Franco, who said he had no one else lined up to care for his 6-year-old son during the school day, is already behind on his monthly car bill and racking up credit card debt.

New York City has seen a late-autumn resurgence of the virus after a summertime lull. Schools have been following a staggered, part-time system of classroom instruction since September, with 1.1 million students dividing their school week between in-person and online learning.

But de Blasio said all instruction would switch back to distance learning again because of the positive rate on coronavirus tests in the city rose to a seven-day average of 3%, the threshold for ceasing in-person classes.

“We must fight back the second wave of COVID-19,” he said.

New York joins other large school districts in cities like Boston and Detroit that have recently cancelled in-person learning. Within the past week, the Clark County School District, which includes Las Vegas and is the fifth-largest in the United States, and Philadelphia’s public school system both postponed plans to return to in-person instruction.

As of Wednesday, COVID-19 had claimed at least 250,016 lives in the United States, which has documented about 11.5 million infections since the pandemic emerged, according to a Reuters tally of public healthcare data. The United States leads the world in both categories.

More than 1,400 of those victims perished during the past 24 hours.

Nearly 79,000 COVID-19 patients were reported in U.S. hospitals as of Wednesday, the highest number yet for a single day, up from about 75,000 on Tuesday, Reuters’ tally showed.

NBC News reported on Wednesday that more than 900 Mayo Clinic personnel in Minnesota and Wisconsin had been diagnosed withCOVID-19 in the past two weeks – nearly a third of the cases among the medical centre’s Midwestern staff since March.

The Midwest has become the new U.S. epicentre of contagion, reporting almost a half-million cases during the week ending on Monday. 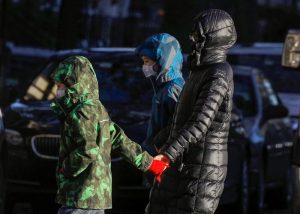 Ohio’s Cuyahoga County, which encompasses Cleveland, ordered residents on Wednesday to stay at home “to the greatest extent possible” through December 17, 2020, in response to “an unprecedented recent surge of severely ill patients requiring hospitalization.”

Government officials in at least 21 states, representing both sides of the U.S. political divide, have issued sweeping new public health mandates this month. Those range from stricter limits on social gatherings and non-essential businesses to new requirements for wearing masks in public places.

White House spokeswoman Kayleigh McEnany on Wednesday called the wave of new restrictions an overreach by state and local officials.

“The American people know how to protect their health,” she told Fox News in an interview. “We don’t lose our freedom in this country. We make responsible health decisions as individuals.”

“I’m the most concerned I’ve been since this pandemic started,” Dr Tom Inglesby, director of the Johns Hopkins Center for Health Security, told CNN on Wednesday.

Forty-one U.S. states have reported daily record increases in COVID-19 cases on November 20, 2020, have registered all-time highs in coronavirus-related deaths from day to day and 26 have reported peaks in hospitalisations, according to the Reuters tally.

In Washington, pressure for a fresh COVID-19 economic relief bill mounted in Congress. Senate Democrats also unveiled legislation to ramp up the national supply of personal protective equipment for healthcare and other frontline workers.