A Public Health England study found the double dose Covishield was 60% effective against symptomatic disease by B.1.617.2 two weeks after the second dose, while the effectiveness after a single dose was just 33%. 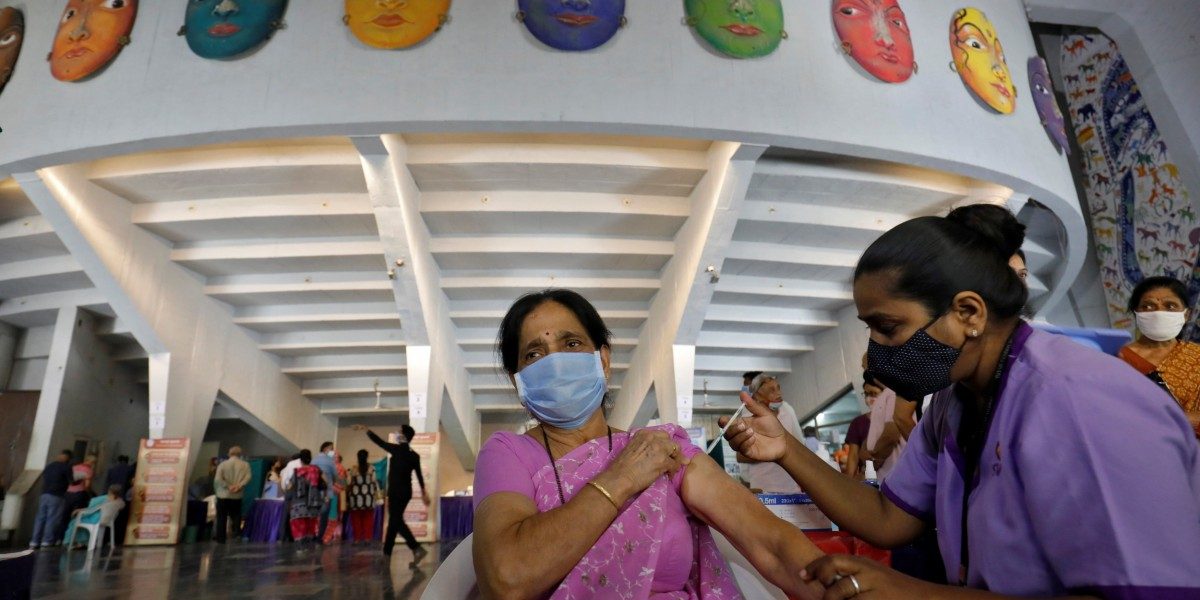 A woman receives a dose of COVISHIELD, a coronavirus disease (COVID-19) vaccine manufactured by Serum Institute of India, at an auditorium, which has been converted into a temporary vaccination centre, in Ahmedabad, India, March 26, 2021. Photo: Reuters/Amit Dave

Bengaluru: New data from Britain on the effectiveness of single and double vaccine shots [PDF] against the strain of coronavirus rapidly spreading across India raises questions about the Indian government’s decision to delay the second dose by up to 16 weeks.

“We found high levels of vaccine effectiveness against symptomatic disease after two doses,” the study whose lead authors are from Public Health England, concludes. “It is likely that vaccine effectiveness against more severe disease outcomes will be greater. Our findings would support maximising vaccine uptake with two doses among vulnerable groups in the context of circulation of B.1.617.2.”

The study established that a single shot of the AstraZeneca vaccine – known as Covishield in India – is only 33% effective against the highly communicable variant, B.1.617.2, first spotted in India but a double dose is 60% effective. The Pfizer vaccine’s effectiveness after the second dose against this variant rises to 88%, but provides little comfort to Indians as the vaccine is not available in the country.

Earlier this month, India said it would administer the second dose of Covishied only 12-16 weeks after the first, up from the previous recommended maximum wait of eight weeks. The move, widely seen as being driven by the need to offset the shortage of doses, means recipients of the first dose will continue to remain vulnerable to the virus variant spreading fastest in the country.

Public Health England (PHE) summarised the results of the study on its website:

Britain’s health minister has called the data groundbreaking and expressed hope that the government would be able to lift more COVID-19 restrictions next month.

The study results also reiterate the importance of receiving both doses of the vaccine – since a single dose confers much less protection, especially against the B.1.617.2 sub-lineage, which is rapidly spreading across India, from where it was first reported, and the world.

The B.1.1.7 variant, first reported from the UK, is also the most common one in the country. PHE recently elevated the designation of the B.1.617.2 strain from ‘variant under investigation’ to ‘variant of concern’.

In the study, described in a preprint paper uploaded on the PHE website, researchers used two approaches to reach the conclusions that they did. From the paper (emphasis added):

“First, a test negative case control (TNCC) design was used to estimate vaccine effectiveness against symptomatic disease with the B.1.617.2 variant compared to the B.1.1.7 variant over the same period. … Briefly vaccination status is compared in symptomatic cases to those who report symptoms but test negative. This helps to control for biases related to health seeking behaviour, access to testing and case ascertainment.

“Second, the proportion of cases with the B.1.617.2 variant relative to the main circulating virus (the B.1.1.7 variant) was estimated by vaccination status. The underlying assumption was that if the vaccine is equally effective against each variant a similar proportion of cases with either variant would be expected in unvaccinated compared to vaccinated individuals. Conversely if the vaccine is less effective against B.1.617.2, the variant would be expected to make up a higher proportion of cases more than 3 weeks after vaccination, when compared to unvaccinated individuals.”

Also read: India’s IT Ministry Warns Social Media Platforms Against Use of ‘Indian Variant’ for B.1.617

The findings offer hope that the existing crop of vaccines can contribute significantly to tamp down the pandemic, which has flared up with unusual ferocity in some parts of the world.

The UK government currently plans to lift the country’s remaining COVID-19 restrictions from June 21, and health secretary Matt Hancock told journalists the PHE’s findings ensure the country is on track.

Britain has rushed out Europe’s fastest vaccination programme thus far but it has faced a new challenge from the spread of the variant first reported from India.

Indeed, the B.1.617.2 variant is increasingly becoming the dominant strain circulating in India, and the PHE’s findings offer both hope and despair.

India recently increased the maximum allowable gap between two doses of the AstraZeneca vaccine, called Covishield in the country, to a full 16 weeks.

The Indian government said its decision was based on the available scientific evidence. However, the country has been reeling from a crippling vaccine shortage, and the increase in the inter-dose gap was conveniently also a way to buy time for additional supply.

This would mean 9.54% of Indians who have received at least one dose have received Covishield. These people enjoy only 33% vaccine-induced protection against symptomatic infections of the B.1.617.2 variant.

In addition, because the Indian government increased the maximum inter-dose gap to 16 weeks, these people don’t enjoy any significant protection against symptomatic infections of the B.1.617.2 variant until they receive their second dose, probably four months later.

Earlier this month, UK Prime Minister Boris Johnson ordered an acceleration of remaining second doses to people aged over 50 years and people who are clinically vulnerable.

“The UK government last week reduced the gap between doses for those aged over 50 from 12 weeks to eight, in an attempt to ensure the most vulnerable in the UK receive full vaccine protection as quickly as possible,” Financial Times reported.

Concern about rising cases in Britain of the variant first found in India prompted Germany to say on Friday that anyone entering the country from the UK would have to quarantine for two weeks on arrival.

On the other hand, India’s rough ride through its second COVID-19 outbreak has continued.

The number of daily new cases at the national level is feeling, although these figures have been undercut by numerous media reports of systematic attempts to undercount and underreport new infections and deaths.

On January 4 this year, V.K. Paul, NITI Aayog member and head of India’s vaccine administration group, said the country “had a sufficient stockpile of vaccines to inoculate priority groups such as healthcare workers and frontline workers in the first phase,” to quote from The Wire Science‘s report.

But as the Co-WIN data shows, only 191.5 million doses have been administered thus far – nowhere near the 600 million doses needed for the 300 million frontline and healthcare workers to be covered in the first phase.

On May 22, Dr Priya Sampathkumar, of the Mayo Clinic, Minnesota, told Thanthi TV that if India needs vaccines right away, the country will have to import them from abroad since investments in local manufacturing will take a few months to bear fruit.