The severity of the COVID-19 outbreak seems to be correlated with whether a country has a universal BCG vaccination (at birth) in place and how long it has been in existence. In a recent article in The Wire, I had presented evidence of the slow spread of COVID-19 in India by tracking the growth rates of the daily case count. I had pointed out that there was a decline in the daily growth rates from March 21 to March 28. The declining growth rate seemed to have reversed itself on March 29. While this seems to be true, even a rising growth rate of daily case counts might not produce a trajectory of the outbreak that has been seen in countries like Italy, Spain, Iran, US, and Germany.

A comparison of the trajectory of the outbreak in India with many other countries in the world highlights an interesting and potentially important difference. India seems to belong to a group of countries that are witnessing a significantly slower rate of spread of COVID-19 than the group of countries where the disease caused by the novel corona virus has caused large number of deaths. If this difference in the patterns of outbreak continues to hold among the two groups of countries, then the picture of the pandemic will be very different in India from what we see in the worst-hit countries of Europe and North America.

To carry out a meaningful comparison of the pandemic’s trajectory across countries, we need to note that it started at different dates in different countries. Hence, any comparative analysis must account for this staggered nature of the outbreak across countries. Comparing case counts, for instance, on a given date across all countries – for instance, March 31 – is likely to be misleading because it does not take into account that the epidemic has had different amount of time to spread in different countries. A better way to compare trends across countries is to start the comparison on the day each country in the comparison group reached a pre-specified case count. A commonly used figure is a case count of 50, and I use this for a simple comparative analysis. Figure 1: Cumulative case count of COVID-19, since the day a country reported its 50th case count, for a group of 20 countries across the world. Source: Corona Virus Dashboard of the Johns Hopkins University.

There is a clear bifurcation in the trajectory of the outbreak among the 20 countries.

• One group of countries recorded very large numbers of confirmed cases within 23 days of when they reached a cumulative count of 50 cases. The following countries belong in this group: Brazil, Germany, Italy, Iran, South Korea, Spain, US. Trajectories of case counts for these countries extend towards the upper right end of the chart in Figure 1. Brazil has so far not recorded cases of the magnitude of the other countries in this group, but shows an extremely rapid growth rate. If the trend observed in Brazil is not halted, it will soon join have an explosion of cases.

• The second group shows a marked difference. The recorded cumulative case counts in this second group of countries are many times smaller than in the first.  The following countries belong to this second group: Australia, Bangladesh, Czechia, India, Indonesia, Japan, Kenya, Malaysia, Mexico, Nigeria, Pakistan, Sri Lanka, Thailand. Trajectories of case counts for all these countries end at the lower right end of the chart in Figure 1.

In other words, the cumulative number of cases in Spain was more than 16 times higher than in India on comparable days after the epidemic took root – in this case 24 days after the cumulative count had reached 50. The same comparative pattern holds for countries in the two groups, with the exact multiple varying across pairwise comparisons. 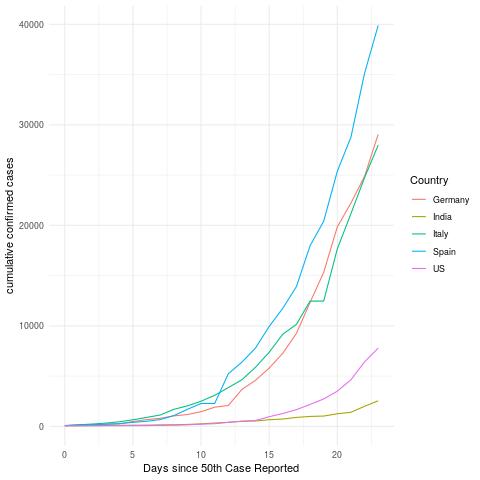 Another explanation might be related to the differences in social distancing measures implemented across countries. While this is certainly likely to be an important part of the explanation, it is also worth investigating a third possibility.

This third possible explanation tries to identify a factor that is common to the second group of high-COVID-19 countries identified above (Germany, Italy, Iran, South Korea, Spain, US), and which is lacking in the countries belonging to the first group of low case loads (Bangladesh, Czechia, India, Indonesia, Japan, Kenya, Malaysia, Mexico, Nigeria, Pakistan, Sri Lanka, Thailand.). One hypothesis about such a common factor relates to universal BCG (Bacillus Calmette-Guérin) vaccination.

A recent study by researchers in the New York Institute of Technology  has highlighted the possibility of a connection between BCG vaccination and the severity of the COVID-19 outbreak (pre-print version that has not yet been peer-reviewed is available here). The study notes that countries without universal BCG vaccination have witnessed much higher rates of COVID-19 cases than countries which have universal and long-standing BCG vaccination programs.

The BCG World Atlas provides information on coverage, status and policies about BCG vaccination across the world – a screenshot of the atlas is provided in Figure 3. The atlas divides countries with information on BCG vaccination into 3 groups. The first group of countries has current BCG vaccination policies for all, i.e. universal vaccination programs are in place – these are colour coded with light green. This groups includes most countries in the world, including India. For the countries included in Figure 1, the following belong to this group: Bangladesh, Brazil, Czechia, India, Indonesia, Iran, Japan, Kenya, Malaysia, Mexico, Pakistan, South Korea, Sri Lanka, Thailand. 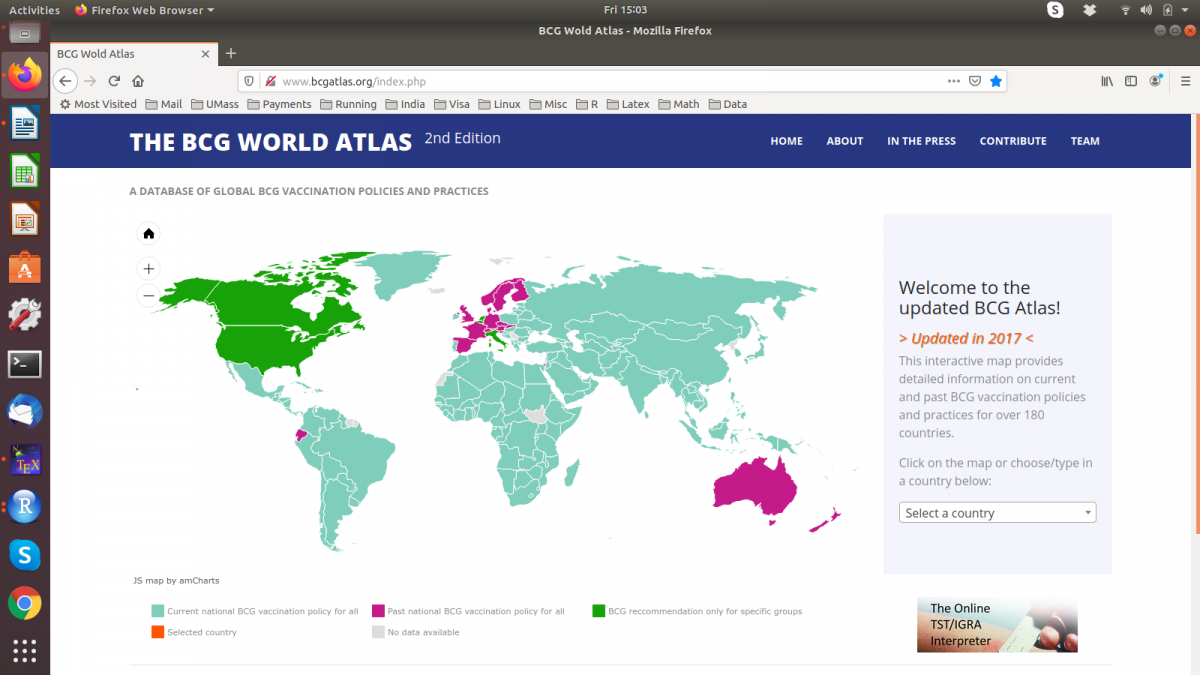 The second group consists of countries where universal BCG vaccination policies existed in the past but are no longer active. Most Western European countries, and Australia and New Zealand belong to this group – these are colour coded with violet. The third group consists of countries where BCG vaccination is recommended only for particular groups or none at all – it is not universal. This group is colour coded with dark green. Canada and the US are the two members in this group. Thus, for the countries included in Figure 1, the following belong to either of these two groups: Germany, Italy, Spain, US.

Details of the variation in BCG vaccination across the 20 countries is given in the table below.

We can see the following from the table: 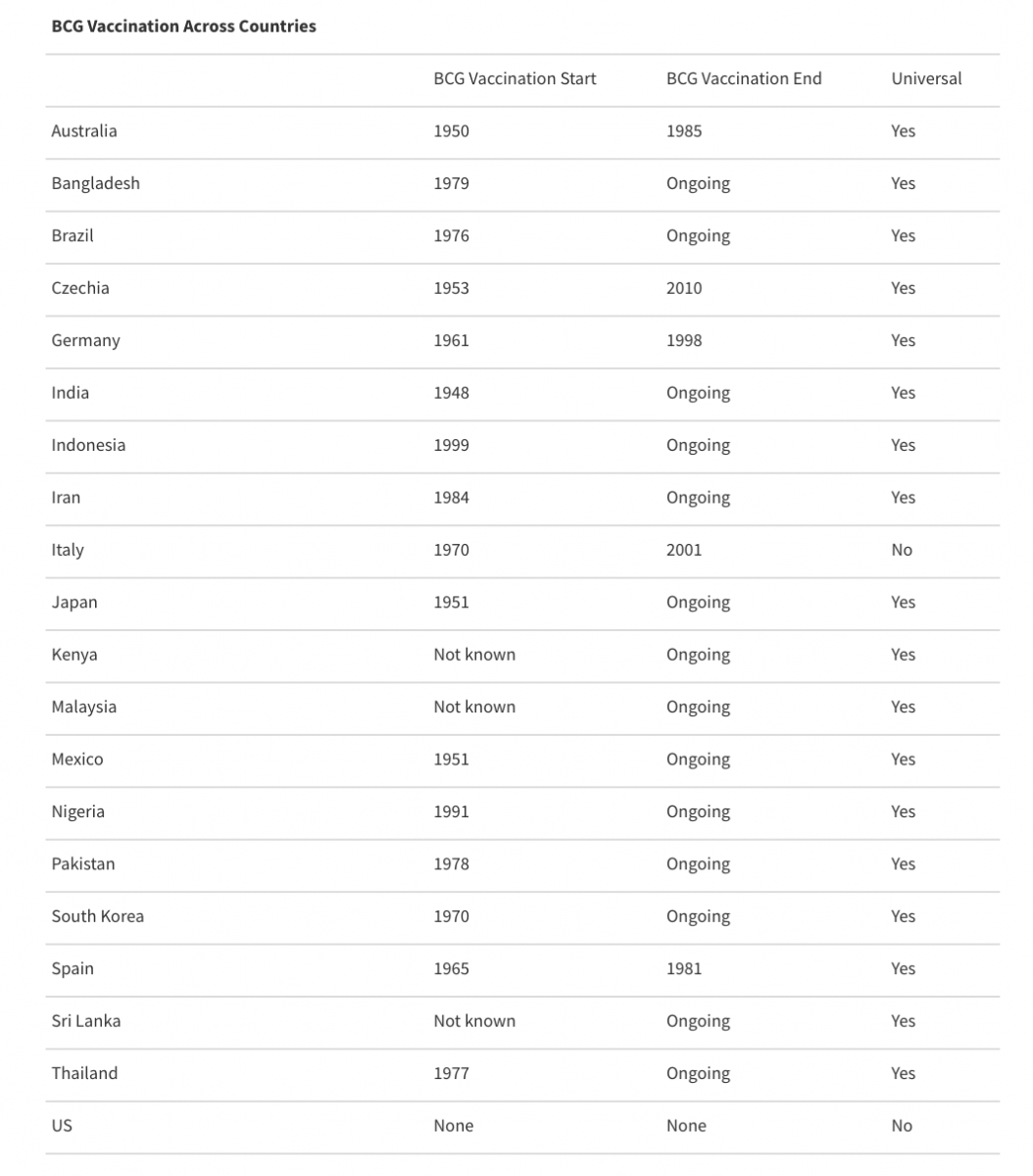 In contrast to this, all the other countries in my sample have an ongoing universal BCG vaccination program. Of course there is variation in when the program was instituted.

Juxtaposing the BCG World Atlas, the information in the table and the information on the COVID-19 case counts, we see that most countries that have seen rapidly rising number of infections are largely those where BCG vaccination is  partial or has been stopped altogether.

Another country in this group is Brazil, which is showing a rapid rise in case counts – though it touched a cumulative case count of 50 only on March 12. While Brazil introduced oral BCG vaccines in 1927, it implemented universal vaccination at birth only in 1976. Thus, the severity of the COVID-19 outbreak seems to be correlated with whether a country has a universal BCG vaccination (at birth) in place and how long it has been in existence.

It is too early to draw any definitive conclusions, as Indian scientists have rightly cautioned. After all correlation is not causation. Researchers will need to carefully rule out the possibility of a spurious correlation by controlling for other confounding factors, like country-specific public health interventions, that might be driving the observed pattern. They will also need to identify a plausible causal mechanism that can link the BCG vaccination to COVID-19.  But the findings reported in the study and the pattern highlighted in Figure 1 – which is certainly not based on an exhaustive comparison, but is only meant to be suggestive – certainly offers some hope in the fight against the deadly COVID-19 outbreak.

If there is any truth in these patterns, India might see a relatively less devastating outbreak of COVID-19 than many Western European and North American countries because it adopted universal BCG vaccination in 1948.

None of this should be used by the government to let up on efforts to ramp up the production and supply of essential medical facilities and staff to deal with the epidemic, or to rapidly expand the safety net to deal with the economic fallout of social distancing and lockdown. Even if the severity of the COVID-19 epidemic in India is lower than in Europe or North America, India’s woefully inadequate health facilities might not be able to deal with it without additional human and medical resources.