In Adityanath's Gorakhpur, 30 Children Die in Hospital in Two Days

While the SP Gorakhpur has said 21 of those deaths were due to a lack of liquid oxygen, the Adityanath state government has fiercely rejected this claim. 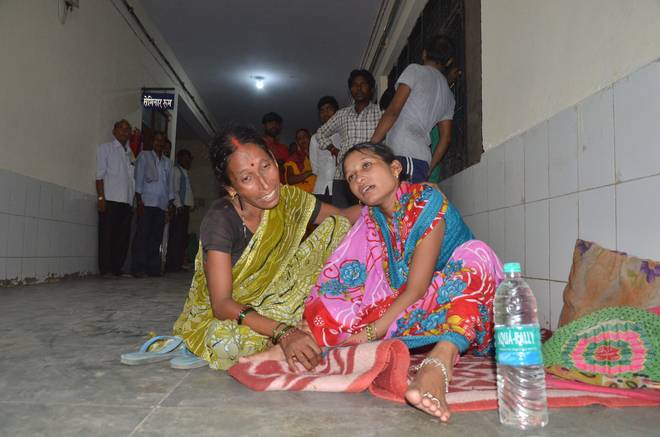 Relatives mourn outside the BRD Hospital in Gorakhpur on August 11, 2017. At least 30 children have died in the hospital since August 9, 2017 midnight. Credit: PTI

New Delhi: At least 30 children have died in the state-run Baba Raghav Das Medical College here in Gorakhpur over the past two days, district magistrate Rajeev Rautela said on Friday.

Though he gave no reason for the deaths, the ministry of home affairs said that according to the SP of Gorakhpur, 21 children died due to a shortage of liquid oxygen.

“As per SP Gorakhpur, 21 children died due to shortage of supply of liquid oxygen in BRD Medical College, in last 36 hours. Senior officers are on the spot. Exact cause is being verified by civil administration,” a home ministry spokesperson said.

The incident triggered a spate of reactions from the opposition parties, with the Samajwadi Party and the Congress seeking the resignation of the state health minister.

Rautela said 17 children died in the neo-natal ward, 5 in AES (acute encephalitis syndrome) ward and 8 in the general ward over the last two days.

To a specific question as to whether the casualties were due to shortage in supply of oxygen, Rautela, who was camping in the hospital, said he found out from the doctors that no death occurred due to lack of oxygen.

The state government, in an official release in Lucknow, also rubbished reports about non-availability of oxygen at the hospital. State health minister Siddharth Nath Singh told PTI, “The deaths of children were very unfortunate and government will set up an inquiry committee to ascertain if any lapse have been there and if anyone is found guilty he will be made accountable.”

Citing a break-up of casualties since August 7 till date, he said according to reports from the paediatric department of the college, 60 children have died due to various diseases during the period.

Singh asserted that the deaths were not because of paucity of oxygen. The district magistrate said alternative arrangements had been made from nearby nursing homes since last night and from neighbouring Sant Kabir Nagar district to ensure availability of liquid oxygen for the hospital.

“At present, there are 50 oxygen cylinders and 100 to 150 more cylinders will be reaching soon,” he said.

Asked whether the vendor supplying oxygen had stopped doing so pending payment to the tune of Rs 70 lakh, the district magistrate said part payment had been made to the contractor for supply of oxygen to the hospital. He said the reason behind the deaths is being ascertained and action will be taken against those responsible.

A magisterial enquiry has been ordered to find the exact reasons leading to the deaths so that basic facts could come out by tomorrow evening. The incident comes barely two days after the visit of chief minister Yogi Adityanath to Gorakhpur, his Lok Sabha constituency.

Terming the death of children as unfortunate, UP Congress President Raj Babbar said, “It shows the insensitivity of the the state government.”

“The state government is responsible for the deaths. How can there be shortage of oxygen? The CM himself was on visit to (adjoining) Mahrajganj yesterday. Gorakhpur is his home district and he should have visited the medical college in Gorakhpur to know about the ground reality there,” he said.

He sought resignation of the health minister on moral grounds and compensation of Rs 20 lakh each to the kin of children who died. Babbar said that the chief minister should seek a report from all districts on the state of health facilities.