Companies owned by people in the Global North control the science and business of TB, making medication unaffordable for poor people in developing countries. 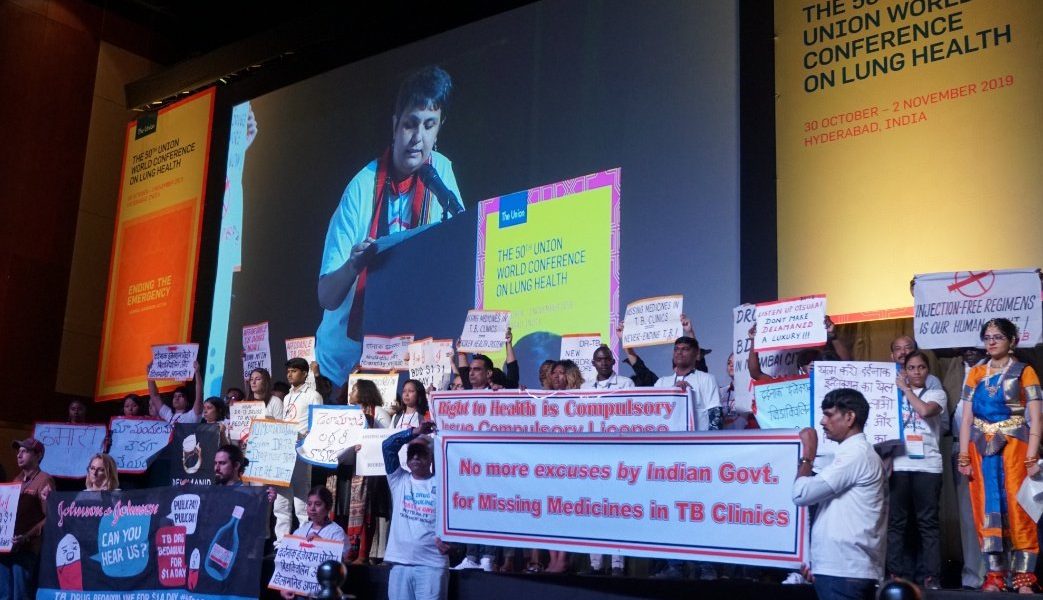 TB survivors and activists protesting at the opening of the conference. Photo: Twitter/@pilimat

Hyderabad: “F*@#ing killing me! Don’t kill me! This is my life. I don’t want to die…We want medicines. We are dying here. God save us…F*@#ing patents.F*@#ing monopolies. This is my life…”

That was Ganesh Acharya, shouting in front of a global audience of scientists, doctors and others in the public health sector, demanding that tuberculosis drugs be made cheaper and accessible to people like him in the developing world.

Acharya knows about this the hard way: he has survived TB twice and has committed his life to working for TB and HIV patients in India.

For me, raging @TbHivActivist has been the face of this conference. Feel the pain of a TB activist in Mumbai who has patients dying on him day in and day out pic.twitter.com/26QKSibjt4

Acharya was shouting himself hoarse along with a number of TB survivors and health activists who had come to the renowned World Conference on Lung Health organised by The Union in Hyderabad last week.

TB survivors used the opportunity to repeatedly confront the global audience about the unaffordability of TB drugs, especially by people in the developing world where the disease hits the hardest. India tops the world with 2.69 million TB patients, 27% of the world’s TB burden.

After the protest by Acharya and other TB survivors, Sambuddha Ghosh, an Otsuka Pharmaceutical scientist, took the mic to respond to them: “We do acknowledge that the price is high but we are working on it.”

Otsuka makes the life-saving TB drug Delamanid, which the company is selling for a minimum price of $1,700 (Rs 1,19,887) for one course. Delamanid is often taken along with other drugs like Bedaquiline, which is being sold for $400 (Rs 28,208) per course.

TB survivors and activists were not impressed by Ghosh’s muted response and continued their protest: “Otsuka! Drop the price! Delamanid ke patents se azaadi (Freedom from the patents on Delamanid)!” they shouted, as they held up posters, distributed flyers to the audience and then left the hall.

TB survivors also disrupted a session where a top executive from Cepheid was present. Cepheid makes the important diagnostic tool called GeneXpert and there was due to be a discussion on how important their product is while diagnosing TB.

TB survivors stormed this session and shouted slogans saying that GeneXpert’s technology was developed primarily with public tax money from the US and UK. Apart from the fact that the machine itself is expensive, the cartridges that need to be refilled in it are also adding to the cost of using this technology.

Survivors shouted, “What time is it? It’s time for five!”

According to calculations made by TB survivors and activists from Médecins Sans Frontières and Treatment Action Group, cartridges should be priced at $5 in order to make it viable for the company but also affordable for TB patients. Nearly 12 million cartridges have apparently been sold in 2018, just in the public sector.

Also read: Health Care Is an Essential Human Right – and so Is a Proper Diagnosis

Phillipe Jacon, a senior Cepheid official, addressed them and said, “We appreciate everything the activist community has said here.” He said his company has received a number of questions from the activists and that Cepheid would respond in a week.

The Global North has already dealt with TB and no longer faces a crisis. In some Western countries, their entire TB burden is in double digits, whereas India has 2.69 million TB patients.

One clear example of the burden of TB is in travel visas: Indians who wish to travel to the UK for a long period have to get screened for TB before being given a visa. This ensures that TB is contained in developing countries.

TB survivors disrupted at least four sessions at the conference in which pharmaceutical company officials were speaking. They demanded that companies and organisations like Johnson and Johnson, Otsuka, TB Alliance and Cepheid bring down the prices of life-saving drugs and diagnostics.

Survivors were particularly interested in and protested against the high prices of Bedaquiline (made by Johnson and Johnson), Delamanid (made by Otsuka), Pretomanid (which was developed by the TB Alliance) and the GeneXpert diagnostic (made by Cepheid).

TB survivors also staged an intervention at the opening ceremony of the global conference. Soon after Vice-President of India Venkaiah Naidu left the hall, TB survivor Nandita Venkatesan did a Bharatanatyam dance performance.

She delivered a rousing speech after that, demanding that the global community stops making decisions for TB patients without thinking of patients’ best interests. “Nothing about us, without us,” she said.

As she wound up her speech, about 50 TB survivors and activists took the stage. “This disease is not just about the science. It’s about those who lost their lives to the disease and the rights of those affected with the disease,” they said.

Another session where they protested at was the announcement of a new drug which is poised to be an important breakthrough in TB treatment. Pretomanid is the new drug making a buzz, as it has recently been approved by the US drug regulator.

Pretomanid, Bedaquiline and Delamanid are the only three drugs that have entered the scene in the last nearly four decades with any hope of treating TB. However, the TB Alliance says it will sell the drug at a minimum price of $364 (Rs 25,670). This drug too will need to be taken along with Bedaquiline and Linezolid and the cost of the entire regimen and course will be $1,040 (Rs 73,342).

Pretomanid has been developed by the TB Alliance with taxes and philanthropic money. TB Alliance is registered as a non-profit and not as a pharmaceutical company. So activists and survivors say they are surprised that TB Alliance has decided to file for patents in several countries, has licensed the drug out to only two pharmaceutical companies for manufacture and will sell the drug in only select markets, and has not published any of their data from their very small trial of the drug.

TB survivor’s shouted at a panel discussion with top officials of the TB Alliance: “Whose drug? Our drug!”

Mel Spigelman, president of the Alliance, then took the mic but refused to address any of the concerns raised by the survivors and activists. He told the audience, “This is not the forum to discuss this issue.”

Anoo Bhuyan was in Hyderabad reporting as one of ‘The Union’s Media Scholars’ at the ‘50th Union World Conference on Lung Health’.