Surviving Insecurity: Mental Health Through a Riot, a Pandemic and an Apathetic State

The loneliness of riot survivors in Mustafabad is not as glamorous as the ones in magazine articles that call for routine and exercise, but is quiet and invisible. 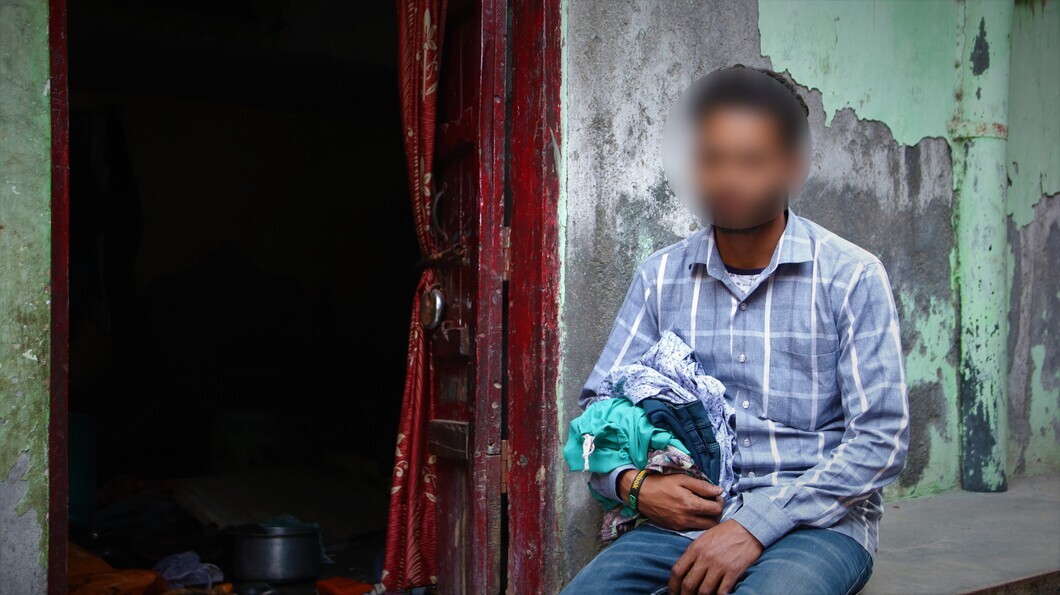 A young man outside his looted house. Photo: Sandeep Yadav.

Within a single week of late February 2020, the lives of thousands of people in Northeast Delhi changed irrevocably. In the largely working-class Muslim neighbourhoods, the three days of communal violence from February 24 to the 27 saw houses and shops being burnt down, severed bodies being abandoned in drains, thousands displaced and an entire community flee into deeper corners of the urban jungle. When the violence ended, thousands were left without houses, jobs, savings and even family members.

“What did I do to deserve this?” cried Shabnam*, with a toddler in her hand. She had to flee her home in Shiv Vihar, an epicentre of the violence. They had hardly gathered the pieces, when their insecurity and anxiety was heightened by the COVID-19-induced nationwide lockdown, declared on March 24, exactly a month after the violence. Since then, food insecurity has increased and spread further, health facilities have become even more inaccessible and livelihoods have remained disrupted. However, to the Muslims of the riot-stricken Northeast Delhi, the pandemic brought along an even more difficult time.

Northeast Delhi is the most densely populated and among the poorest districts in India, and is home to the highest Muslim population in Delhi. The area also falls behind severely in sanitation and institutional healthcare. Unsurprisingly therefore, most riot survivors are from working-class families: daily wage labourers and small-scale traders, among others. A conversation on their mental health is imperative today as they stand at a particularly oppressive overlap of the Islamophobic and anti-poor narratives given to the pandemic, topped by indiscriminate arrests by the Delhi police in connection with the violence.

Very early on into the lockdown, a public health emergency was twisted into a narrative of hate that drew a direct correlation between being a Muslim and being a carrier of the virus. This incentivised hospitals, police personnel and regular citizens to act on their Islamophobic impulses, also leading to an increase in hate crimes against Muslims. The months of the lockdown will perhaps be equally remembered for the exodus of working-class migrant workers from urban areas, the assaults on the poor, and welfare schemes that were ill-planned and severely detached from the realities on the ground.

Deep within this Islamophobic and anti-poor lockdown, investigations pertaining to the riots have continued, leading to nearly 800 arbitrary and indiscriminate arrests targeting Muslims and activists. Consequently, the one-sided investigation by the Delhi police has resulted in an equally preposterous chargesheet with gaping inconsistencies. However, neither managed to hold any state actors accountable. And all this happened during a lockdown during which families had nearly no access to legal support, and the office of the subdivisional magistrate had been refusing to process victims’ compensation applications.

Also read: We Must Intervene Now to Check the COVID-19-Induced Mental Health Pandemic

Under these circumstances, what does life in lockdown look like for a survivor of the Delhi riots?

Right after the violence, the debilitating trauma among both direct and indirect victims of the riots was clear in their complaints of back aches, panic attacks, insomnia and other signs of anxiety. But as a month passed, most survivors began to rebuild their lives. Many were living in temporary accommodations and a small fraction was living in a government-run relief camp at Eidgah. However, this respite was short-lived.

“Just when things were starting to get a little better, the lockdown came in and changed everything for the worse,” Aamir*, a riot survivor, said.

The announcement of the lockdown brought chaos all across Northeast Delhi’s Mustafabad. The reluctantly set up and haphazardly run relief camp in Eidgah was closed overnight. Most families were given a token sum of 3,000 rupees, some rations and were asked to fend for themselves as rains poured over Delhi. A resident of the camp recalls this as one of the most traumatic nights of his life: “It was raining heavily and I was homeless with my two little children. We had nowhere to go.”

Over the duration of the lockdown, these families were displaced multiple times. Many couldn’t afford rent and were facing eviction. In the story of their survival, this night stands out as a painful reminder of the state’s abandonment and apathy towards the community.

Some days into the lockdown, food insecurity became rampant in Mustafabad, regardless of people’s relationship with the riot. This was intensified by widespread anxiety over an impending food shortage.

In the violence, the majority of Ruksana’s house and her sons’ workplace were burnt down, and their 13 buffalos were stolen. Today, the family of eight is living in the sole unburnt room of their house, with no income. At the height of the lockdown, Ruksana’s son Asif* stood in food distribution lines but would often return empty-handed. With no prospect of a livelihood in sight, Ruksana’s family is anxiously waiting to pick up their lives, standing inches away from hunger.

In Mustafabad, where the wounds of communal violence persist, the sense of insecurity extends to physical safety as well.

Heena*, a 16-year-old resident of Mustafabad, fainted every time she heard a loud noise after the violence. When we met her ten days after the incident, she said she could not sleep or eat anything. The fear of being chased down by a mob is still palpable to her, and during the lockdown, these fears have only intensified – especially since the keys to the gates of her street belong to Hindu families.

Such fears of being violently attacked for being Muslim has been permanently etched in the minds of several survivors like her. Heena’s fear is particularly concerning because the constant distress can get hardwired and potentially lead to clinical illness. In the post-riot scenario, borders on religious lines have only hardened in previously diverse neighbourhoods, forcing many to never return to their burnt or looted homes. 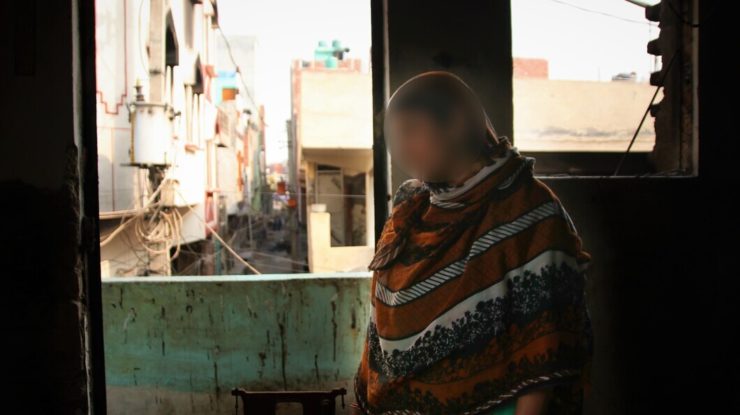 A woman at a looted house. Photo: Sandeep Yadav

As the lockdown and the riot investigation intensified, community members became even more aware of their identities as working-class Muslims. Every day, people were seeing their friends and neighbours either being taken into custody under rioting allegations or being assaulted by the police for ‘breaking’ the lockdown. Retired labourer Akram* is unfortunately living the nightmare.

“Kya karein? Inki sarkar hai. Inki marzi hai. Humare paas sirf duaein hain. (‘What can we do? It’s their government, it’s their whim. All we have are our prayers.’)” It has been over two months since Akram’s son, Iqbal, was picked up from the market and arrested on the grounds of inciting violence, and jailed.

While they do have a lawyer now, the family did not have the two-lakh rupees the lawyers first asked to have their son released. For now, Akram waits for the courts to reopen and to see his son, finding solidarity in the many others indiscriminately arrested across Delhi.

Akram is aware that his son’s arrest is part of a pattern that targets those like him, which is why his anxiety is not an individual clinical concern. It is rooted in larger structural failures and needs to be identifies as such.

We first met Javed* a few days after the riots. He had fled along with his family of seven to the relatively peaceful Indira Vihar locality. Having escaped with nothing but their lives, they were in dire need of almost all essentials – ration, bedding, clothes, utensils, undergarments. Because of what they had witnessed, the family was in shock as well.

Javed’s young daughter had not slept for days. When we caught up with Javed during the lockdown, he was living alone for the first time in his life. His family was in their native village while Javed was stuck in Delhi, without an income. Although his family had survived a riot that completely disrupted their way of life, today, alone in his room in Indira Vihar, it was loneliness that Javed talked about the most.

He was overwhelmed, scared and worried for his family. Having spent many days alone in his small house, little things like finding food, cooking and taking care of himself became large burdens. This loneliness was beginning to consume him. He began to display apathy and severe hopelessness. However, over the weeks of talking to him and supporting his psychosocial needs, he has now begun to cope and is reaching out to his neighbours.

Javed’s loneliness is outside of the middle-class’s imagination. It is not as glamorous as the ones in magazine articles that call for routine and exercise, but is quiet and invisible. Even with the intervention of a trained psychosocial volunteer, it took time for Javed to speak about his isolation. The stigma around masculinity and vulnerability added to his hesitation. There are many like him who fight a solitary and invisible battle against loneliness, but due to the severe gaps and disparity in the mental health care for working-class persons, these struggles remain unknown and unaddressed.

The testimonies from Mustafabad show us a community grappling with a mental health crisis at the hands of a system that does not see them. In any riot situation, the months right after the violence are crucial to healing. However, for the families affected by the Delhi riots, this period was brutally disrupted by the cruel design of the lockdown and its Islamophobic and anti-poor impulse.

It is crucial to remember that healing cannot happen in an environment of apathy. Through the course of the riots, its aftermath and the pandemic, the community has increasingly felt that there is little that they can expect from the state. The state was not only pivotal to instigating the riots, but also was complicit in its unfolding and apathetic in its aftermath. It has been four months since the violence, yet there has been no public acknowledgment – let alone remorse – for what this community had to endure. On the contrary, the community that suffered the highest losses has now been vilified.

Every aspect of the difficulties communicated in these stories are proof of the oppressive structures that govern the lives of the survivors. In this scenario, not identifying and addressing the psychosocial crisis, and its structural origins, can lead to larger physical, mental and social concerns, for collective trauma such as this is always trans-generational.

Ironically, these injustices have overshadowed the fear of the COVID19 pandemic itself.

“I’m not scared of corona, I’ve already seen all the misery I can” – Azeem*, riot survivor

The observations, testimonies and narratives in this article are derived from our work with the Delhi riot survivors as part of the Citizen’s Collective for Peace. We primarily work in the area of Old Mustafabad, where people displaced by extreme violence in the Muslim areas of Shiv Vihar and Karawal Nagar sought refuge. Alongside rescue, relief, medical and legal support, our work includes an active community-based psychosocial support network.

Varna Balakrishnan is a New Delhi based human rights researcher focusing on issues of citizenship, communal violence and gender. She is currently a research fellow at Karwan e Mohabbat. Meera Viswanathan is a mental health professional who is working with the families affected by the riots in North-East Delhi. She is currently a mental health fellow at Karwan e Mohabbat.