Bidi-smokers and their families spend about Rs 16,870 crore every year on diagnostic tests, drugs, doctors’ and hospital fees and transportation. 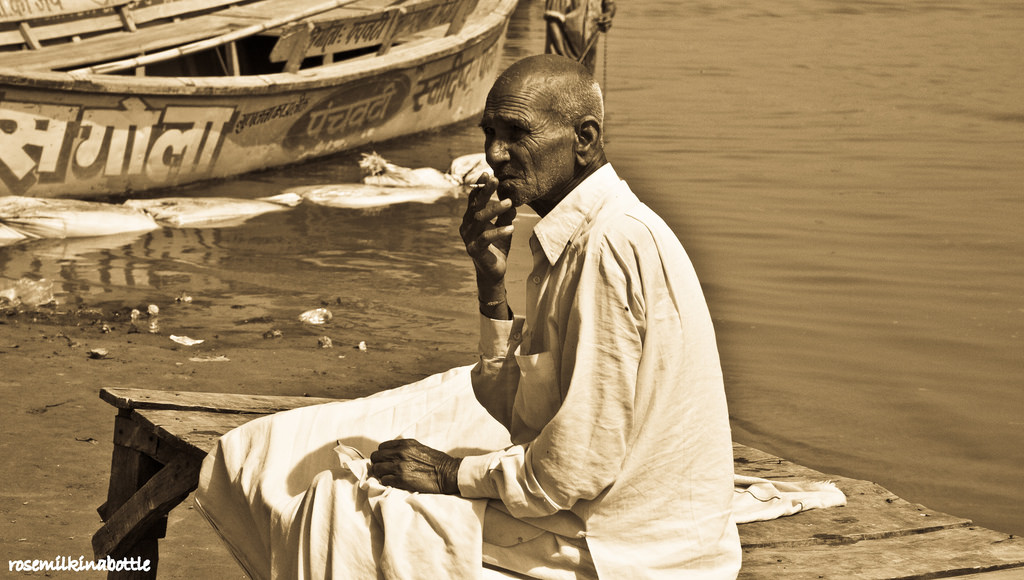 A man smoking a bidi by the Ganga in Meerut. Credit: rosemilkinabottle/Flickr, CC BY 2.0

Compare this to the Rs 80,000 crore (approx.) it costs India in ill health and early deaths in just 2017 – all due to bidi-smoking. This estimate comes from a new study by Rijo M. John at the Centre for Public Policy Research, Kochi. It was published in the journal Tobacco Control.

“Bidi-smoking is a severe threat to the public health and national exchequer,” John said. He regretted “taxation as a tool to regulate bidi smoking has been highly underutilised in India” even though there’s “overwhelming evidence” that this method can be effective.

A common belief is that “political clout” has been blocking higher taxes on bidis.

“There is certainly an economic rationale for increased taxation on bidi,” John continued, referring to his study. “Allowing bidi consumption to continue unhindered would make income distribution even more regressive, as the poor will continue to bear a disproportionately large share of economic costs from bidi smoking due to their higher bidi-smoking prevalence.”

So his ask: that the “tax burden of about 22% on bidi be increased to the WHO-recommended rate of 75%”.

He calculated the cost of smoking bidis using national and international data sources. The study ultimately estimated the direct and indirect costs of treating the resulting afflictions and early deaths among 30-69 year-olds in 2017.

The costs included the direct medical cost of treating diseases, and the indirect morbidity and mortality costs of premature deaths.

Direct costs include diagnostic tests, drugs, doctors’ and hospital fees and transportation. Together, they make up 20.9% (Rs 16,870 crore) of the total cost.

The remaining ~79% – indirect costs – includes accommodation for relatives and carers and loss of household income.

“The total annual economic costs of bidi smoking amounts to approximately 0.5% of India’s GDP,” John explained, “while the excise tax revenue from bidi is only half a percent of its economic costs.”

As a result, the direct cost incurred due to smoking bidis amounts to 2.24% of India’s total healthcare expenditure.

And because it’s predominantly the poor who smoke bidis, these costs can push them deeper into poverty.

According to official data, bidis account for 81% of the tobacco smoked in the country. There are 72 million regular bidi-smokers over the age of 15.

“Bidis outsell cigarettes in the ratio 4.3:1 in India, as per the new Global Adult Tobacco Survey in 2016,” John said.

Many bidi-smokers wrongly believe that bidis are less harmful than cigarettes. Bidis are a causal risk factor for many types of cancers. They include those of the mouth, pharynx, larynx, oesophagus and lungs. Bidis also increase the risk of chronic bronchitis, tuberculosis and respiratory diseases.

As a result, about 15 million people in India face poverty because of spending on tobacco and associated costs. Such expenditure also crowds out the amount of money available for food and education among the poor. Has the Kerala government initiated satisfactory tobacco control measures in the state? “The implementation of the Cigarettes and Other Tobacco Products Act [COTPA] is still not at a satisfactory rate in Kerala. But I would say the compliance in Kerala is much better than most other states in India,” John said.

The conversation on heightening taxes shifted after the Government of India implemented the Goods and Services Tax (GST) in July 2017. Now, state governments don’t control the taxes.

As a result, “it is not possible to have a state-level policy on taxes on any tobacco products.”

Instead, states have to better implement COTPA, conduct awareness campaigns and improve civil society engagements, among other measures. John added that “comprehensive awareness campaigns could have greater impact” in Kerala because of its higher literacy.

Through a paper published earlier this month in the same journal, Tobacco Control, other researchers noted “there was an overall decline in household-reported bidi and cigarette consumption between 1999-2000 and 2011-2012.”

This group, led by Kiara C-M Chang, of the Imperial College London, assessed the household-reported consumption of bidis and cigarettes in 42 districts between 2007 and 2009.

When they compared the data from these districts to those in which the NTCP had not been implemented, the results were distressing. The ‘NTCP districts’ had had no significant reductions in the proportions of households reporting bidi or cigarette consumption relative to the control districts.

In bidi- or cigarette-consuming households, the per person consumption of bidi or cigarette sticks hadn’t fallen by much relative to those in non-NTCP districts.

In their paper, the researchers wrote:

Our findings indicate that early implementation of the NTCP may not have produced reductions in tobacco use, reflecting generally poor performance against the Framework Convention for Tobacco Control objectives in India.

India had ratified this convention in February 2004. The researchers continued:

This study highlights the importance of strengthening the implementation and enforcement of tobacco control policies in low income and middle income countries to achieve national and international child health and premature non-communicable disease mortality reduction targets.

In 2005, two scientists from the Indian Council of Medical Research noted that tobacco use (smoke and smokeless) in any form among male school students in India’s Northeast ranged from 50.4% to 74.4%. The corresponding numbers among female school students were from 32.0% to 56.4%.

No stakeholder can ignore this horrendous reality. So it’s worth asking if the NTCP really works, and how much. Are we reaching all sections of society?