Rural Rajasthan Runs From the State, Not Medicines

Fear and mistrust of the government has put a load on civil society. 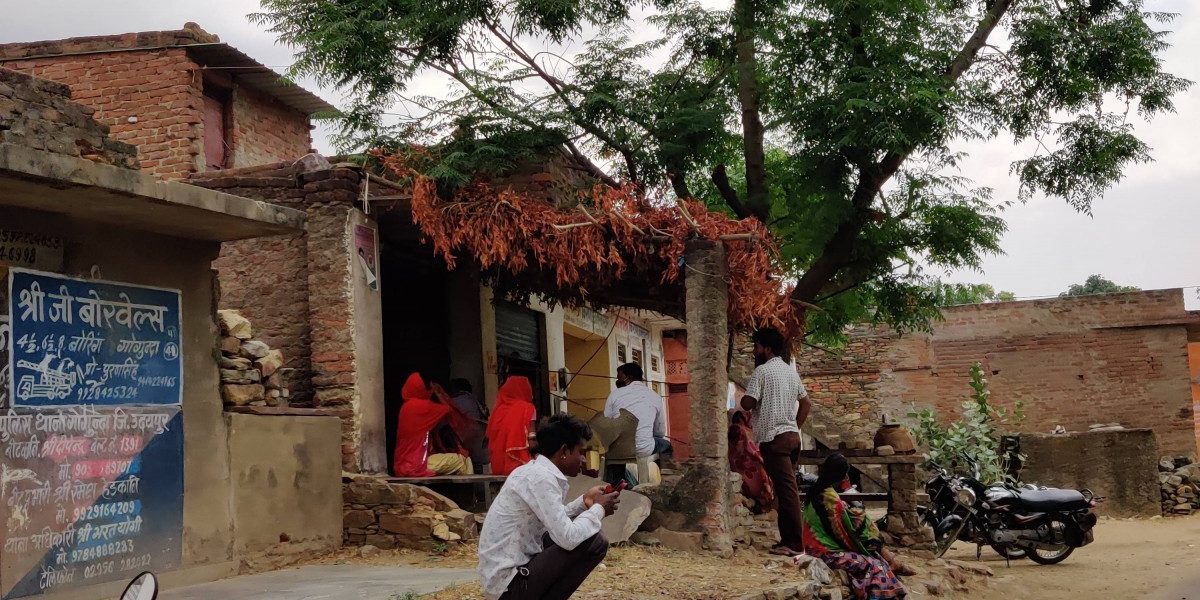 People disappear into their homes as soon as my colleague and I appear with medicine kits in hand for suspected COVID-19 patients during our visits to hamlets in Gogunda, a block in Udaipur district, Rajasthan. Every morning in Gogunda, I wake up to the sound of wailing, signalling a death, or see new shaved heads in the surrounding villages. From those in the community who trust us ‘sanstha ke log’ or ‘NGO people’, we hear that people are afraid of the government and its response to COVID-19, whether it is medicines and vaccines or isolation and hospitalisation. “Yeh maarne ki goli hai (This medicine is poisoned)” “Teeka se mar jayenge (The vaccine will kill us)” “Aage [Udaipur] le jaayenge toh maar daalenge (If we are referred to Udaipur, they will kill us)” is a constant refrain.

When Basic HealthCare Services (BHS), Udaipur first noticed a sudden spike in COVID-19-like symptoms in rural and tribal regions of Udaipur in April, the peak of the wedding season, their aim was simple: to prevent the spread of the virus by providing care and support to the community. With the collaboration of their partner organisations Aajeevika Bureau (AB) and Shram Sarathi (SS), so far in Gogunda block, 130 volunteers from the community have been identified and trained and they in turn have distributed 925 medicine kits along with homecare tips to those experiencing symptoms, following up on them periodically.

With the response strategy consisting of a three-pronged approach – community response, a Covid Care Centre (CCC) in collaboration with the state government and a helpline at Amrit Clinic run by BHS – we all believed that our tasks were mapped out for us.

However, no one anticipated the difficulty we face in the field every day merely for people to admit they are sick. People also refuse to accept kits from the Auxiliary Nurse Midwife (ANM) and Accredited Social Health Activist (ASHA) who have been tasked with door-to-door surveys and distribution of medicine kits by the government. With some people blaming the weather, malaria or typhoid, most deny their symptoms outright even if they are shivering in shawls in 40-degree heat or coughing into their scarves. “Abaar toh sab ready hai (We are fine now)” is the standard response. Our newly adopted strategy is to agree with what they say, not prove that they have the virus. 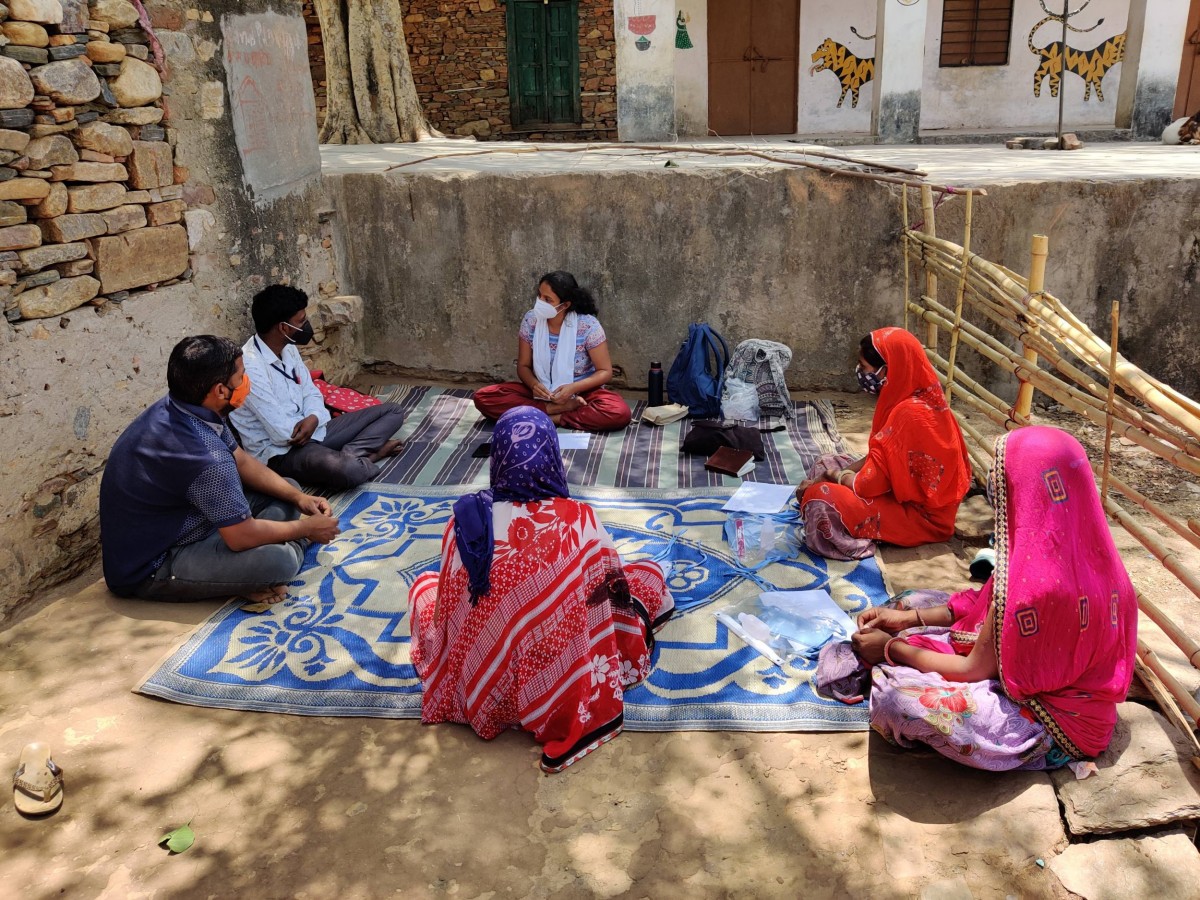 The trust and faith that we know the community has in us sansthawale does not always help in the case of COVID-19. Fake news and rumours spread as fast as the virus through WhatsApp videos of metal nails in multivitamin tablets and Facebook doctors who make vague claims of poisoned vaccines that create fear and resistance to government medicines and the vaccine. Survey lists of the ill, COVID-19 tests and government-sponsored medicine are all avoided for fear of being sent to Udaipur never to be seen again, reinforced by fake videos of organ trafficking and kidney theft. Doctors are seen as people who take lives rather than save lives and advance their careers at the people’s expense.

However, our community volunteers have a vastly different experience on the ground. “Aap mein aur mujhmein raat-din ka farak hai. Main toh vahi rehta hoon aur aap bahar se aate ho (There is a stark difference between you and me. I live with them whereas you are seen as an outsider),” Kishan ji tells me. A volunteer who lives in and is from the community has two advantages – they are known and trusted by people and can be contacted and held accountable easily. “There lies one of our answers; that we harness local solutions… When we go in the beginning, in some places people don’t trust our volunteers. But just the fact that they are there and they are engaging with people [they] are coming to realise that these women or these men are here for our good. As the trust is getting built, they are coming back,” says Dr Sanjana Brahmawar Mohan, co-founder and director at BHS.

Also read: Delhi’s Ongoing Food Security Challenge: What Went Wrong and How Can It Be Fixed?

Interestingly, people are not disregarding treatment completely and are looking after their health in their own ways and on their own terms. Quacks or jholachaap doctors and faith healers are considered the best available alternative as they make no record of the patient and they charge money for their services. Ramli Bai from Dungri Kheda, a hamlet in Gogunda, explained that people believe free medicine is duplicate medicine. Has the effect of aggressive globalised privatisation reached remote rural areas already, successfully convincing people that only paid healthcare is quality healthcare?

In Chhaali, a panchayat in Gogunda, people were ironically taking injections of unspecified medication to prevent the virus and were not afraid to do so. Will people then agree to get vaccinated by jholachaaps based solely on the trust they have in someone with no government tag attached? Dr Pavitra Mohan, co-founder and director at BHS, however believes that “Bangali (jholachaap) is not a viable option of course, for the healthcare per se because they are an unskilled, exploitative force. But they are there… basically feeding on either the non-availability or mistrust of the system. So I think the work ahead is to strengthen the system so that the trust can be rebuilt.” 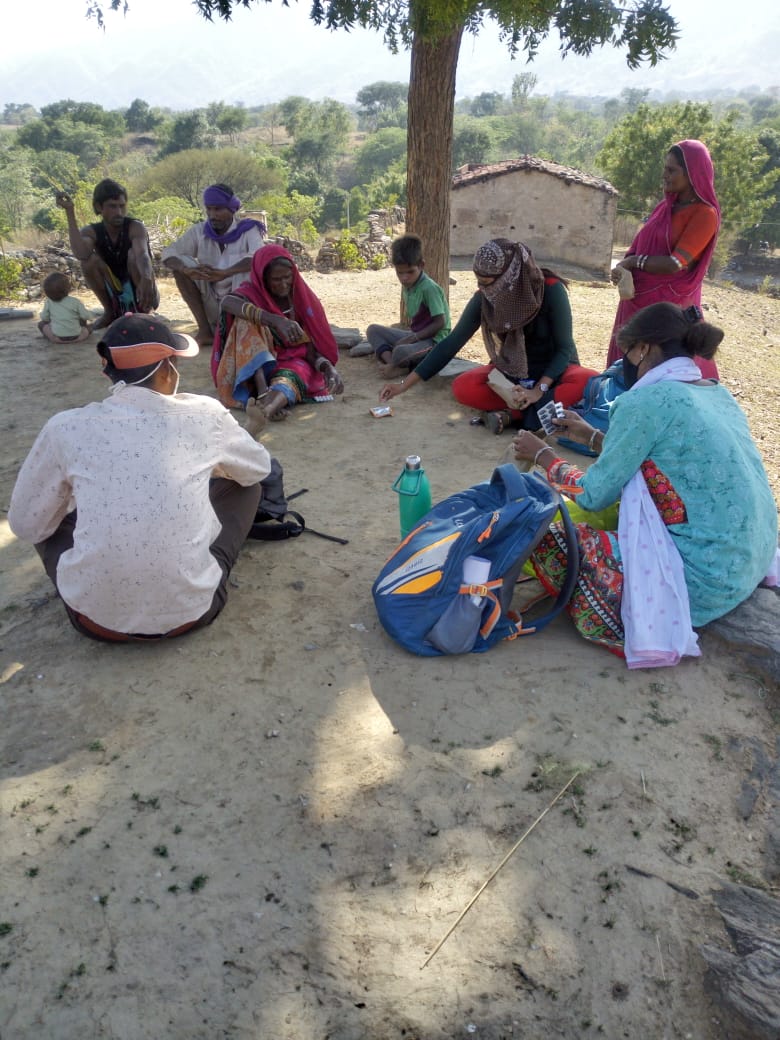 Past experiences of people like Punaram ji, the ex-sarpanch of Chitravaas, Gogunda, speak volumes of the treatment that tribal communities are meted out in public health facilities. As the sarpanch at the time he was able respond to a rude and disrespectful CHC staff with “Tameez se baat karo (Talk politely)” but inhumane treatment such as people being ordered to bathe and then return for treatment due to their alleged stench strips them of dignity. There are also local collectives and politically vested groups that have a very strong influence over people in Chitravaas who claim that COVID-19 is a hoax. From Bherulal ji in Jhunjharpura hamlet in Gogunda, I learnt that “Log quarantine se darte hai (People are afraid of quarantine facilities)”, a residual effect from last year’s nationwide lockdown when institutional quarantine facilities in the region were unhygienic, cramped, and the people unfed and uncared for. The fear is more palpable this year with people witnessing deaths much closer to home and the high death tolls constantly appearing in media headlines.

As for being a sansthawala, I find myself constantly and repeatedly clarifying that I am not from the government but from an NGO and that I have nothing to do with the sarkar in the hopes that people will take the medicine, practice isolation at home and agree to referrals. I am after all dealing with people who have their own understandings and perceptions of the world and cannot be forced to believe in something or someone that has rarely helped them. Behavioural change is extremely difficult to bring about as I found out when a community volunteer who is a collective leader associated with AB for almost two decades fell ill. The very first thing he did was get a high dose injection from a jholachaap.

But there are also days that help keep me going, like when I asked a fearful man to open the multivitamin capsule and check for nails himself and felt that the first step to trust could be built. Or when I see that the faith people have in a volunteer from the community translates into people accepting the medicine kits. But sometimes I do question if the immediacy of the need of medication, which is being bought and distributed free of cost by an NGO in our case, trumps the long term goal of demanding accountability and quality service from the public health system? Dr. Mohan says “We will have to play a role in both of them – one is working with communities to eliminate the fears and distrust and myths and on the other hand working with the system to ensure availability closer to where people live.”

Shifa Zoya is currently a Field Fellow at Aajeevika Bureau, Udaipur, working on migrant labour issues. She has completed her BA in Anthropology and Psychology from St. Xavier’s College, Mumbai.