Review: An Effort to Understand Why Medical Corruption Takes the Form It Does

The existence of a scam as enormous as Vyapam suggests the unethical lows our society is willing to stoop to for the supposed prestige and wealth that being a doctor in the country brings. In olden days there was a sense of physicians being public servants functioning for the good of humanity, but now stress is being laid on the business side of the profession. – Jawaharlal Nehru, 1947

Medical students and young doctors might find similarities between this sentiment and what they often hear from professors and veteran doctors around them. Two words I constantly heard as an 18-year old medical student were ‘prestigious’ for the medical institution we were in and ‘noble’ for the profession we were destined to enter. It was only bit by bit, revelation by revelation, that the many ignoble aspects of our would-be profession become common knowledge for me and my fellow students.

Things are different now. As corruption in healthcare has been a consistent topic of discussion in the public sphere for the past several years, people today – including aspiring medical students – know a lot about the grey areas of medical practice from the outset. With the book Healers or Predators? Healthcare Corruption in India coming out in such a scenario, many doctors wondered and one of the book’s editors noted, why write yet another book that “washes dirty linen in the public”? The reviews on retail sites like Amazon are telling; four out of nine give it a one-star rating.

However, as is often the case with most controversial texts, opening one book and reading it lays many preconceptions to rest. Healers or Predators? is a 600-page tome, with 43 chapters and some 50 writers. There is something for everyone here. The contributors include doctors, social workers, public health experts and journalists. Though the title of the book presents a polarising binary (healers or predators?) and the foreword by Amartya Sen warns us about the book being “splendid, if depressing”, the content is highly enlightening.

Perhaps the best way to interpret the book’s title is to consider it as presenting not two out of two possibilities, but two extremes bookending a wider range. One of the contributors, George Thomas, who was “sad” with the book’s title, put this well during a panel discussion: “Lots of doctors may not be healers, but not all of those are predators.” 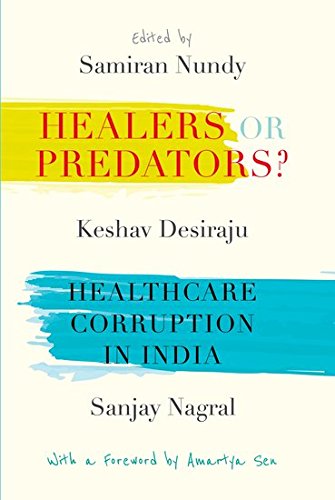 A unique part of the book is the section entitled ‘Background’. It consists of chapters analysing medical corruption in India in fresh, interesting ways. For healthcare professionals including doctors, this part of the book is likely to be intellectually stimulating: though these professionals are viscerally aware of the intricacies of how the system functions (or doesn’t), few possess a comprehensive understanding of why it is the way it is, particularly through a detailed scholarly lens.

For example, the very first chapter provides a helpful bird’s-eye view of the historical factors that have made our healthcare system prone to its particular kinds of corruption. We learn that in the 1940s, as many as 75 patients had to struggle for a government OPD doctor’s attention during a single hour: no doubt “anyone who could afford it was likely to pay [bribes] to get the civil surgeon’s services privately.”

And if the section on the background of corruption is intellectually stimulating, the section titled ‘We are not alone’ is psychologically reassuring: corruption exists everywhere, not just in India. The chapters here discuss the forms of corruption seen in the healthcare sectors of our neighbouring countries: Bangladesh, Pakistan, and Sri Lanka. Not surprisingly, there are tremendous similarities in the way politicians and bureaucrats misuse their authority for private gains and how private hospitals employ innovative techniques to put profits, not patients, first. There also exist, in these countries as in India, oases of resistance, scattered efforts at reform and a mix of public anger and helplessness about the state of affairs.

An oft-neglected point is emphasised here in several chapters: healthcare corruption doesn’t exist in isolation, it is very much a part of the (corrupt) society around it. The notorious Vyapam scam, also discussed in the book, is the perfect example: its highly convoluted workings are proof of extensive involvement of persons far outside the healthcare professions, and the existence of such an enormous scam in the first place suggests the unethical lows our society is willing to stoop to for the supposed prestige and wealth being a doctor brings.

As a former physician now studying the history of the medical profession in India, I found the chapters written by veteran doctors most interesting. M.K. Mani, who has been in medicine for the last 60 years, writes that he cannot claim the medical profession “was as white as snow when I was a junior doctor.” There were doctors even then whose practice incorporated kickbacks and bribes, but “such activities were carried out in a clandestine manner and they were condemned by the majority.” Indeed the story of how this “deplorable exception has become the rule” over the last six or seven decades is one that merits detailed historical attention and holds a crucial key to policies that are more than just knee-jerk reactions.

What Dr Mani says about the undesirable aspects of medicine during his time as a junior doctor is corroborated by the quote at the top of this review. It is part of a speech that Jawaharlal gave in February 1947 to a meeting of an association of physicians in New Delhi. There has been much “dirty linen” in the profession since the beginning. Perhaps the adamant refusal of doctors to come clean about it in public has something to do with the full-blown crisis we are witnessing today. It is ultimately this prolonged conspiracy of silence that the editors of ‘Healers or Predators?’ intend to challenge: “[We] hope that through discussion and introspection, we will learn to improve our policies, programmes, and practices.”