Authorities insist patients aren't reaching out to healthcare facilities of their own initiative even as treatment facilities have prioritised COVID-19. 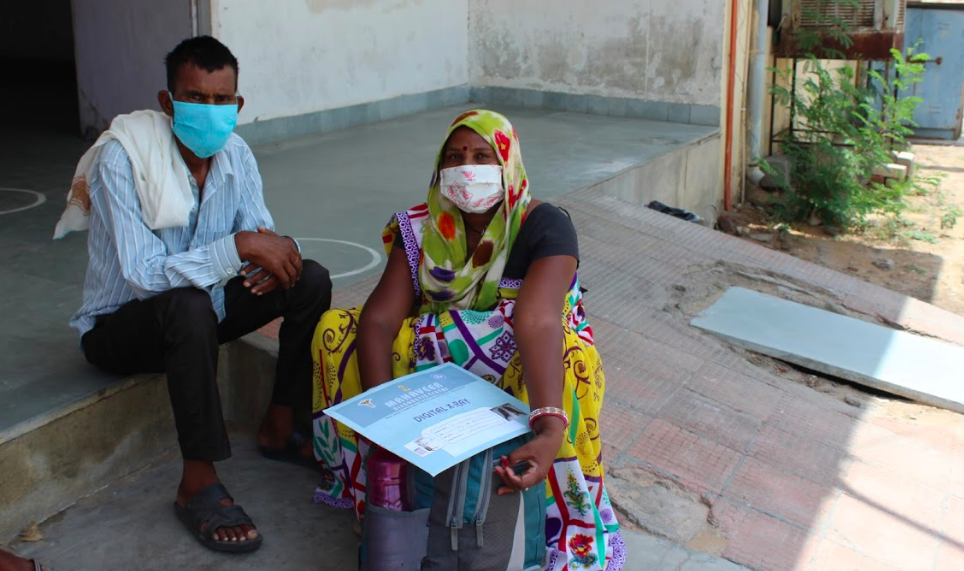 Jaipur: After India’s nationwide lockdown to slow the spread of the novel coronavirus came into effect on March 24, Rekha and her husband Tara Chand, who stay in a one-room house in Jaipur’s Pratap Nagar, had thought they’d be able to weather this crisis just as well as anyone else. They probably would have succeeded if Chand hadn’t developed the symptoms of tuberculosis (TB) shortly after.

Every day in the last month, he has been unable to sleep thanks to the ceaseless coughing and fever. The couple had decided to not visit a doctor, at least not until the pain became unbearable, because they feared he’d be diagnosed with COVID-19 instead, and isolated from family.

But Chand’s condition deteriorated with each passing day. He has lost his appetite, and about 10 kg of weight, but still resists the idea of getting himself checked.

At one point, Rekha took him to a private TB facility knowing it could be expensive, but “at least he would not be admitted here,” she said. Here, Chand was diagnosed with TB, and prescribed medicines. The latter had been able to do little to improve his condition, until about two days ago, when his coughing improved just a little. This encouraged the couple to visit the Institute of Respiratory Diseases (IRD), a premier TB facility in Jaipur.

Also read: Can We Co-Opt the Fight Against COVID-19 With That of Tuberculosis?

At IRD, the patients were not let inside the check-up room. The doctors simply spoke to each patient’s relatives to get a sense of their condition, and then prescribed more medicines. Other patients at the facility said they’d had the same experience.

Last week, Kamla, a 60-year-old woman from Ranipura village in Rajasthan’s Bundi district, about 180 km south of Jaipur, found traces of blood in her vomit. Worried that she had TB, her family rushed her to a private hospital since the government TB facility in the area wasn’t open.

It was TB – but Kamla’s family had to discontinue her treatment because they couldn’t afford being treated at a private facility. On June 1, as the lockdown was national relaxed, her brother arranged for a motorbike and brought her to the IRD in Jaipur for treatment.

Many patients come from far-flung districts to Jaipur to get treated for TB, hoping that it will be a single-day affair. But as Kamla found, the cartridge-based nucleic acid amplification test (CBNAAT), used to detect TB, wasn’t working at the IRD. The person in charge of the lab said the machine had broken down over two weeks ago and that the engineer hadn’t been able to drop by thanks to the lockdown. Kamla and Manoj have travelled to Jaipur from Bundi to get tested for TB. Photo: Shruti Jain

For a month now, the IRD has been collecting samples and sending them to the Sawai Man Singh Hospital in Jaipur for tests. For Kamla, this delay, of a day or more at a time, means she will either have to stay over for a day in Jaipur or travel from Jaipur to Bundi and come back again for the follow-up checks. And thanks to the lockdown, public transportation isn’t available and private alternatives are simply unaffordable.

All together, and in a distressing irony, the coronavirus pandemic, the national lockdown and their combined consequences have rendered already-weak TB patients at risk of contracting COVID-19 as well.

However, the authorities say the CBNAAT machine being out of order doesn’t mean their focus on COVID-19 has disrupted TB services.

The machine “can test only four samples at a time and it takes about two hours for one cycle of tests,” IRD deputy superintendent Rahul Saini told The Wire. “The duty of workers here is for five hours, so the machine can … hardly perform eight tests a day. For the last two months, the patient flow has been minimal, so a non-working [CBNAAT] is not a major interruption [of services].”

This is just one issue. There are others. 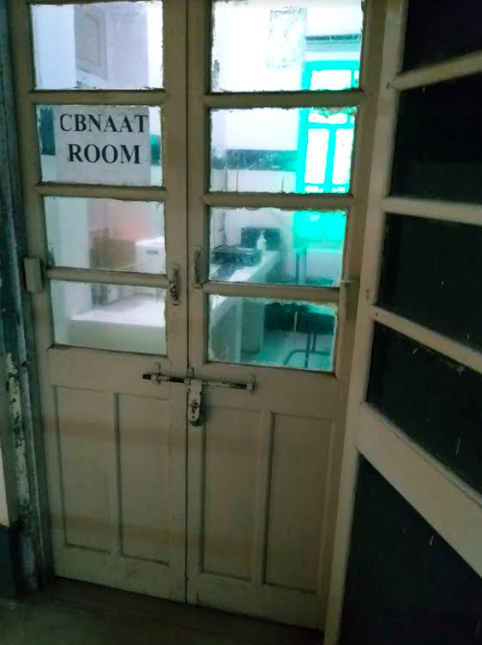 CBNAAT machines have not been working for the past month. Photo: Shruti Jain

In April, the Indian Council of Medical Research approved the use of CBNAAT machines to test for COVID-19. To comply, the Rajasthan government reallocated eight CBNAAT machines in different districts to COVID-19 tests, precipitating a significant drop in the number of TB tests conducted in the state. And according to a dashboard maintained by the Central Tuberculosis Division, the TB diagnosis rate has dropped as well.

In the first 25 days of March, 10,511 people had been diagnosed with TB in Rajasthan. In the next 25, only 5,152 patients were diagnosed. TB isn’t the kind of disease capable of becoming 50% less common in a given population in a matter of days; this drop is almost certainly related to the shrunken diagnostic capacity.

“The consequences of the COVID-19 pandemic, and our response to it with lockdowns and diversion of funds, diagnostics and manpower instead of staying focussed on a far more ancient and more deadly foe, is likely to leave a profound and long-lasting impact on TB control,” Zarir F. Udwadia, a consultant physician at the Hinduja Hospital, Mumbai, told The Wire.

“It is estimated, as a consequence, an additional 6.3 million cases of TB will occur between 2020 and 2025, and an additional 1.4 million TB deaths in this time.”

As it happens, authorities have been insistent that only a few patients have been reaching out to treatment facilities of their initiative, so CBNAAT machines not being available hasn’t been disruptive at all. The situation on the ground is quite antonymous.

Bilal Ansari, a resident of Jaipur, is in his fifth month of treatment for multi drug-resistant (MDR) TB. He collects his medicines from a dispensary about 2 km away from his home. MDR-TB is the result of TB bacteria becoming resistant to the drugs used to kill them, mostly as a result of inadequate treatment.

For a few days now, Ansari has had a high fever and needs to know ASAP if his treatment needs to change in any way. Usually, such patients submit to a sputum culture conversion test, a type of test performed within two months of a treatment regimen to evaluate the efficacy of anti-TB drugs in patients with MDR-TB. 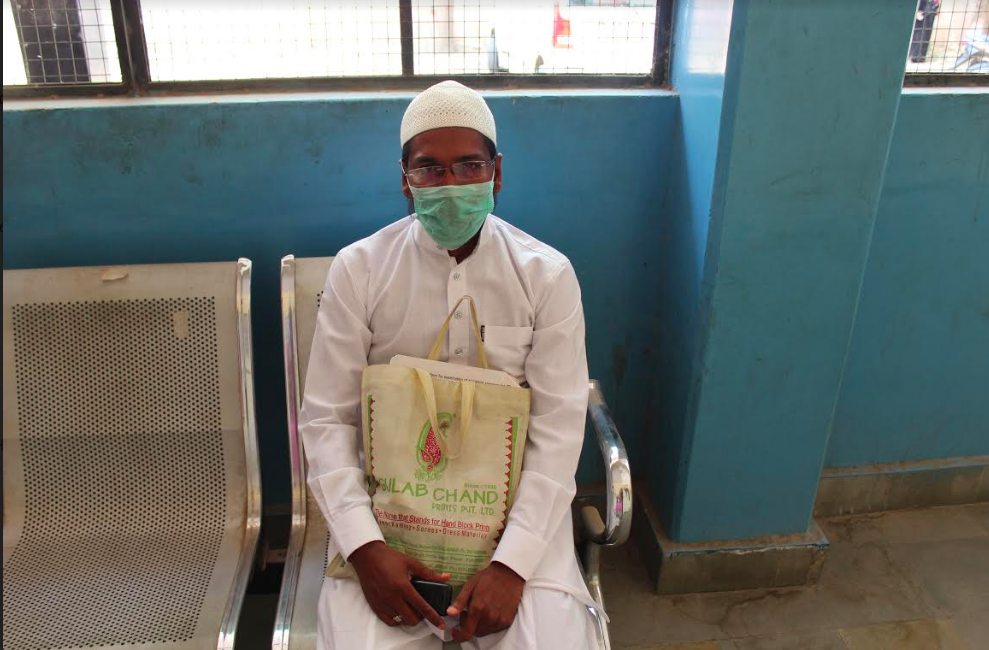 Bilal Ansari has visited the TB treatment centre four times in the past two months, but has not been able to get his sputum culture done. Photo: Shruti Jain

However, the lockdown put paid to that, and Ansari has been forced to continue with the same drugs for three months. He is now at risk of his condition getting much worse.

Ansari and others like him have been regularly reaching out to their respective dispensaries, and every time, they’re told the laboratories are shut because their technicians and assistants have been deployed on COVID-19 duty.

The laboratories qualified to perform these tests are located in only three districts of Rajasthan: Jodhpur, Ajmer and Jaipur. The staff here have been assigned to handle COVID-19 samples from 9 am to 12 pm and TB samples from 12 pm to 3 pm, halving the time devoted to handling TB samples.

“We enter the lab wearing PPE to test samples for COVID-19, so until it is not finished, we can’t handle the TB samples,” a technician at the laboratory in Jaipur told The Wire. “The timings are equally divided for both, but practically, the priority is COVID-19 samples.”

The technicians at other, ‘peripheral’ TB units are also critical. They are trained to conduct acid-fast bacillus (AFB) tests, a basic test used to check for an active TB infection within a day, comparably fast relative to the CBNAAT machines but cheaper.

Most districts in Rajasthan have only one or two CBNAAT machines, so AFB tests bear most of the state’s diagnostic load. However, when the state government redeployed TB staff for COVID-19, it didn’t replace them at their current positions, considerably slowing the pace of AFB tests. 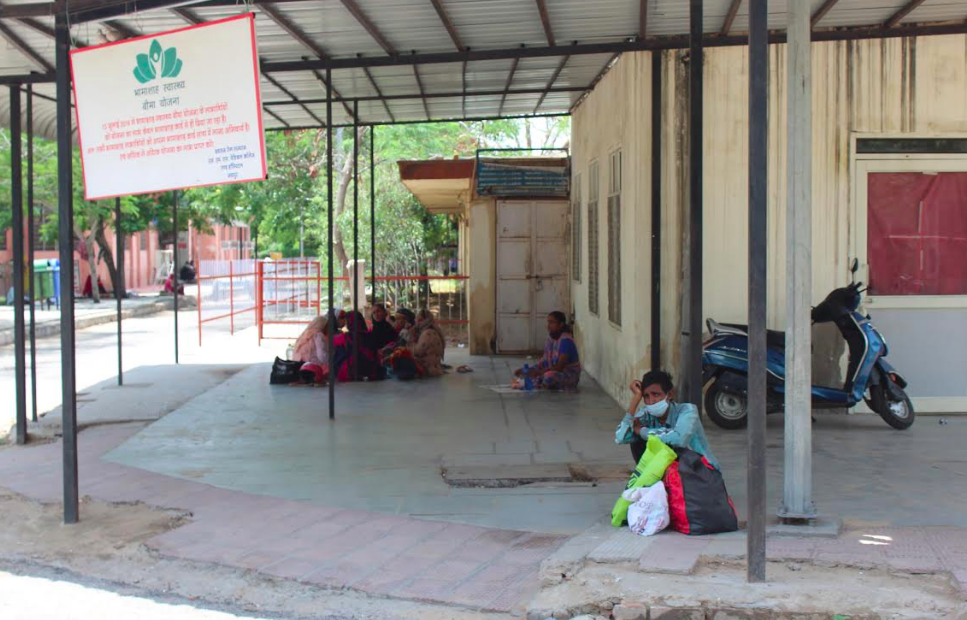 State authorities disputed this. Sudhir Sharma, the Jaipur district’s TB officer, told The Wire that technicians had been deputed only during the first phase of the lockdown, from March 24 to April 14. “Now the staff is continuing their duty at TB units.”

However, diagnostic facilities The Wire visited on June 1 still missed their testing staff.

The Central Tuberculosis Division issued an advisory on May 13 to all states and union territories to ramp up their TB services pronto, even as they grappled with India’s COVID-19 epidemic.