The fire will not affect production of coronavirus vaccines, SII CEO Adar Poonawalla has said. 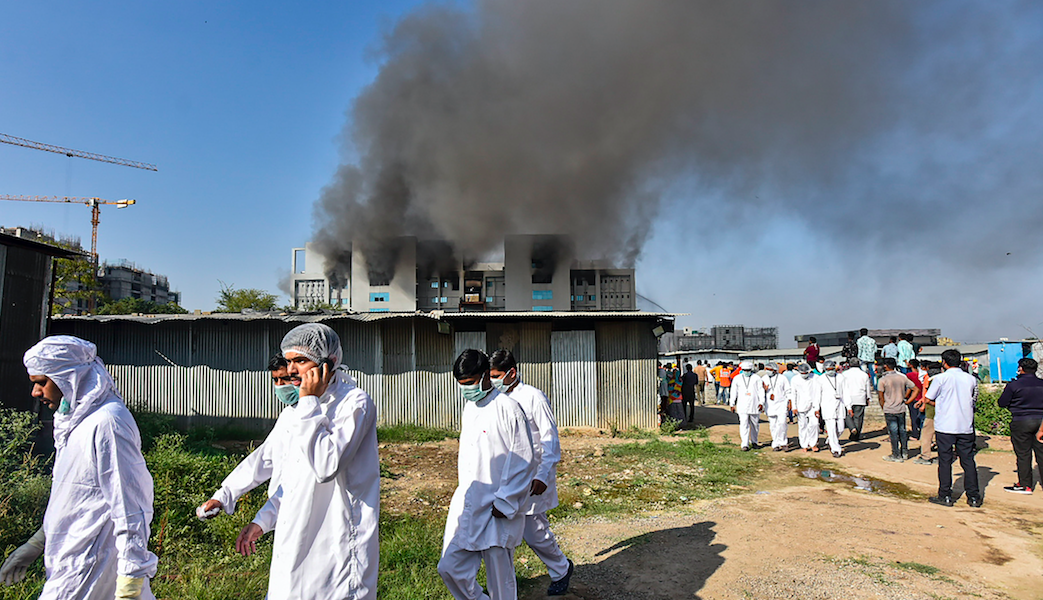 Workers of Serum Institute of India come out of the building after fire broke out in it, in Pune, Thursday, Jan. 21, 2021. Photo: PTI

New Delhi: Five persons died and nine were evacuated from a building in the Serum Institute of India’s Manjari premises in Pune after a big fire broke out at the facility on Thursday.

SII is the world’s biggest vaccine maker. The Manjari facility is where the ‘Covishield’ vaccine used in the nationwide inoculation drive against the pandemic is made. SII is producing around 50 million doses of the vaccine developed by Oxford University and AstraZeneca a month in the complex.

The building where the fire broke out is part of the under-construction site of the Serum facility and is one kilometre from the Covishield manufacturing unit, PTI reported.

The fire will not affect production of coronavirus vaccines, SII CEO Adar Poonawalla has said.

Poonawalla had first tweeted that no lives had been lost and later posted that news had come in of the deaths.

We have just received some distressing updates; upon further investigation we have learnt that there has unfortunately been some loss of life at the incident. We are deeply saddened and offer our deepest condolences to the family members of the departed.

Videos and pictures from news agency ANI showed black smoke billowing out of a grey building.

Mayor Murlidhar Mohol said it appears the five persons who died in the fire were working on the building floor. Fire officials recovered the bodies during an inspection, he said.

The fire, which broke out at 2.45 pm on the fourth and fifth floors of the SEZ 3 building in the Serum Institute premises, was brought under control in two hours, police said.

Deputy Commissioner of Police Namrata Patil told PTI that nine people were evacuated from the spot after the fire broke out.

Chief Fire Officer Prashant Ranpise said cooling work has commenced at the spot. Fifteen water tankers were pressed into action and the fire was brought under control around 4.30 pm, he said.

“The cause of the fire is yet to be ascertained. Furniture, wiring, cabins were gutted. No major machinery or instruments were stored on the floors where the fire broke out,” he said.

“I have taken information from the Pune Municipal Corporation about the incident and instructed locals officials to carry out a detailed probe into the fire,” Ajit Pawar said.

Condolence messages have poured in from the world over.

Terribly sad news – thoughts with all those affected by the fire at @SerumInstIndia and especially those who have lost loved ones https://t.co/g7JRU7P91P

Deeply saddened to learn of the lives lost during the fire that broke out at buildings under construction at @SerumInstIndia today. Our thoughts are with the bereaved families. Wishing for a quick recovery of the injured.@adarpoonawalla

The loss of lives in a fire accident at the Serum Institute of India in Pune is distressing. My thoughts and prayers are with the bereaved families. I wish speedy recovery of the injured.

(With Reuters and PTI inputs)