Virtual communication facilitates a direct link between sex workers and clients, allowing them to create independent networks devoid of intermediaries. 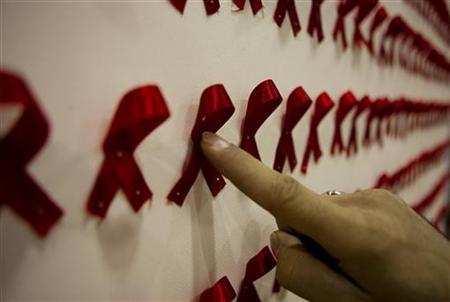 A man points at artwork at a conceptual art exhibition about HIV/AIDS in Tehran, December 2, 2007. Photo: Reuters/Morteza Nikoubazl

While the rate of increase of new HIV infections in India has been dropping over the last decade, it appears the National Aids Control Organisation’s (NACO’s) targeted interventions have been skipping over important vulnerable groups at higher risk of contracting HIV. Part of the problem appears to be that high-risk groups have been using apps, such as Grindr and Blued, and voice-calling services on their mobile phones to find sexual partners, and in the process slip off NACO’s radar.

The last available census of female sex workers and homosexual men happened in 2009-2011, and estimated the size of these two groups to be 11.58 lakh and 4.27 lakh people, respectively.

Maharashtra, Telangana, Karnataka and Andhra Pradesh are the top four states that receive NACO’s targeted interventions. Female sex workers in these states have some of the country’s highest prevalence of HIV. Similarly, Andhra Pradesh, Karnataka and Maharashtra, along with Gujarat, have the most number of identified homosexual men, and HIV prevalence among them is higher than the national average.

Since 2014, NACO claims to have conducted site revalidation exercises once every three, six or 12 months in areas where it implements its interventions, reexamines previously established hotspots, identifies new hotspots, and updates its data pertaining to high-risk groups. However, its own annual reports show that NACO hasn’t revised these groups’ population estimates since the 2009-2011 census.

According to Purnima Parmar, a team leader with the targeted interventions group at the Indian Health Actions Trust (IHAT), Bengaluru, “Plans for conducting a new estimation exercise are already under process in NACO.”

Since it was established in 1992, NACO has attempted to fight HIV in four phases, at least thus far. It began to expand the scale of its targeted interventions in phase 2 of the National AIDS Control Programme, or NACP 2, and continues to do so under NACP 3 and 4 as well.

Each intervention involves reaching out to high-risk groups and distributing condoms, consulting on and treating sexually transmitted infections and implementing anti-retroviral therapy. The objective is to suppress the virus at the source and keep it from moving to the bridge population – groups of people who move across regions, such as truckers and migrant workers – and ultimately to the general population.

The use of apps and voice-calling services have complicated this picture somewhat. In addition to anonymity, studies have shown that virtual communication facilitates a direct link between sex workers and clients, allowing them to create independent networks devoid of intermediaries.

The Immoral Traffic (Prevention) Act of 1986 criminalises sex work in India. Additionally, even after the Supreme Court struck down Article 377 last year, thus decriminalising homosexual sex, homosexual people have been reluctant to come out in the open because the general attitude is a long way from catching up.

Sudhir, a male sex worker in Maharashtra, has been using Grindr and Blued for a few years now. He told The Wire that more and more workers like him have been turning to smartphone apps to find sexual partners across the peninsula.

“On these dating apps, we can clearly state that we are chargeable, which makes targeting easier,” he explained. “In some regions, due to the absence of brothels, mobile phones have become the sole [mode] of solicitation.”

There are some disadvantages, of course. In one example, Sudhir said, he was hired by one client but when he reached the location, there were more than four people waiting. At other times, clients refuse to pay, force themselves on the workers or try to cheat them, and usually the workers can’t do anything about it.

Renuka, a female sex worker in Maharashtra who operates exclusively through mobile phones, said that working on the streets means she and her fellow workers need to discreetly signal to potential clients to indicate that they are sex workers, and such gesturing is punishable under the Immoral Traffic (Prevention) Act 1986. This is another reason why they’re moving to mobile phones.

Localised studies in states with a higher prevalence of HIV have tried to gauge the extent of the problem but a pan-India study remains highly overdue.

For example, in a 2015 study, researchers at IHAT and the Delhi AIDS Control Society mapped 14,787 female sex workers operating on social networks, with the help of known pimps. They found that only 10% of workers were registered for targeted interventions.

A survey other researchers conducted the same year, among female sex workers in Chirala in Andhra Pradesh and Calicut in Kerala, indicated the widespread use of mobile phones for solicitation. Of 550 participants in Kerala, 46.3% of workers reported using mobile phones and 15% of workers solicited sexual partners using mobiles only. In Andhra Pradesh, of the 589 respondents, the corresponding figures were 78.8% and 12%, respectively.

A qualitative study published in 2016 estimated that the fraction of homosexual men using the social media to solicit partners has been on the rise across all education and income levels.

Qualitative studies have been able to link phone-based solicitation to greater difficulty with negotiating the use of condoms during sex as well as to symptoms related to sexually transmitted infections.

Need for better mapping and estimation

But as more conversations happen within apps designed (rightly) to protect people’s identities, more potential cases of HIV infection disappear from NACO’s radar, and more people are denied its targeted interventions. All together, these gaps increase the risk of HIV entering the bridge and then the general populations.

The 2009-2011 census was restricted to venue-based solicitation, such as at brothels and certain parts of the streets that female sex workers had been known to frequent. So unless the new exercise – the plans for which are already in the works, according to IHAT’s Parmar – is able to account for the rising popularity of mobile phones, it will underestimate the amount of work NACO has left to do, which in turn will postpone the day India can be HIV-free by years.

That said, NACO has been aware of this blindspot – as it indicated in its IBBS report – but hasn’t been doing enough to cover it. Multiple studies, both independent and sponsored, conducted since 2015 have reported the same gaps in its estimation process. A midterm review of NACP 4 published in 2016 recommended upgrading the methods, tools and guidelines used in population estimation and mapping exercises vis-à-vis high-risk groups.

In 2019, NACO published a whitepaper acknowledging that virtual spaces have emerged as a new risk environment for HIV transmission. The paper discussed one pilot density-mapping survey of homosexual men who used one, some or all of Grindr, Hornet, Scruff and Blued in Pune, Mumbai and Vijayawada. Based on its outcomes, NACO members have been deliberating the use of two methods to address the blindspot: a census-based mapping procedure and a capture-recapture method.

However, no one knows when and how the organisation plans to roll the procedure out nor how it will modify its targeted interventions. NACO had not responded to requests for comment at the time of publication.

It is heartening for now that ground-level efforts are underway. Both Sudhir and Renuka said they had created WhatsApp groups for sex workers who operate both online and offline, and which are used to share information about HIV, contraceptive measures, health checkups, etc. Workers have also deliberated including messages about HIV and contraception on dating apps, such as on their profiles, but suspect their reach is limited.