After criticism from the private sector, the government has already revised its rates once, but private hospitals want it increased again to help match what they say are their actual costs. 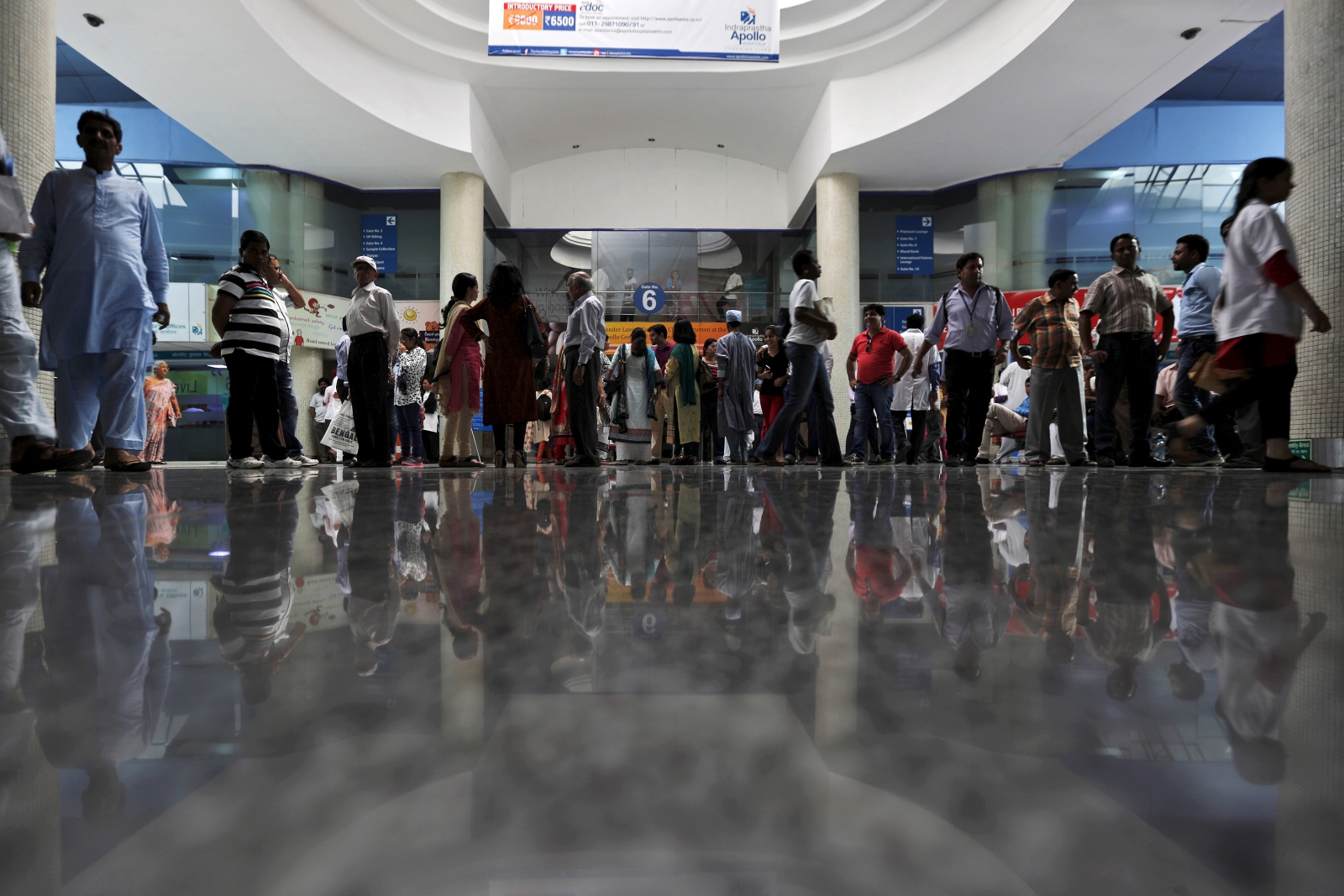 Patients and their attendants are seen inside Apollo hospital in New Delhi. Credit: Reuters

New Delhi: Private hospitals as well as industry groups have been writing to the CEO of the government’s massive new health insurance programme, Ayushman Bharat, informing him that their proposed reimbursement package rates are unscientific, arbitrary and insufficient. They have indicated that they may be unwilling to participate in the scheme at all.

“It appears that overall, no scientific basis has been applied to arrive at the rates,” says a letter recently written to the CEO of Ayushman Bharat, from the Association of Healthcare Providers India (AHPI). AHPI says they represent about 3,000 private healthcare institutions.

They have also signalled their unwillingness to participate in the government’s ambitious scheme if the rates are not revised: “The participation of healthcare providers would be sparse and the Ayushman Bharat will remain grossly ineffective on the ground.”

Last year, the Karnataka government, in collaboration with the Indian Institute of Management-Bangalore (IIM-B), did a comparative analysis on the cost of medical procedures in private hospitals versus what the government reimburses via the Central Government Health Scheme (CGHS). These rates were found to be much lower than what private hospitals claimed themselves as the cost that they incurred.

AHPI has sent the CEO of the scheme, Indu Bhushan, a copy of this analysis, along with new columns showing the rates proposed by the Ayushman Bharat National Health Protection Scheme (AB-NHPS).

The AB-NHPS was announced in the annual budget in February, promising an insurance coverage of Rs 5 lakh per family to about 10 crore of the poorest families.

Cost of procedures at private hospitals in Karnataka versus Ayushman Bharat

Last November, the Karnataka government released its health policy. To come up with this, they had engaged various collaborating partners to handle different chapters. One chapter was on costing of medical procedures at empaneled hospitals. For this, a number of experts from IIM-B and the National Accreditation Board for Hospitals and Healthcare Providers (NABH) were enlisted.

Their analysis compared the cost which private hospitals said they incurred, on a range of procedures, with the reimbursements offered by the government, for those who use these private hospitals, under the CGHS.

The AHPI is using this same analysis, with new columns, comparing the rates which the central government is now giving under Ayushman Bharat.

Ayushman Bharat rates have already been revised once after coming under criticism from the private sector. However, the revised rates with some increases are still not meeting the expectations of private players.

For example, for implanting a bare metal cardiac stent, the Karnataka government’s costing study said it would cost Rs 85,818. CGHS is reimbursing nearly the entire amount at Rs 80540. But AB-NHPS is offering Rs 65000.

An amputation above the knee is said to cost Rs 94,003 according to the Karnataka government’s costing study. The CGHS reimburses only Rs 7,245. AB-NHPS is proposing much more than CGHS, but much less than what private hospitals want, at Rs 18,000.

Likewise, a hysterectomy for cancer patients, is said to cost Rs 1,45,143 according to the Karnataka government’s study. CGHS reimburses Rs 78,370. AB-NHPS is offering to reimburse much less – at Rs 50,000.

The AHPI’s analysis says that the government’s health insurance scheme is only reimbursing private hospitals for 12% to 58% of their actual costs.

They have asked their member hospitals, to “represent individually” to the CEO of AB-NHPS, as well as the prime minister, health minister and NITI Aayog, to tell them that the rates are “unrealistic, abysmally low and untenable.”

In the annual budget this year, the government announced the roll out of what they dubbed “the world’s largest healthcare programme.” It was in fact a large-scale yet partial health insurance scheme.

Since then, it has also been called the ‘Ayushman Bharat National Health Protection Mission’ and the ‘Pradhan Mantri Rashtriya Swasthya Suraksha Mission.’

The initial iteration of the NHPS announced in last year’s budget, promised a cover of Rs 1 lakh per family. It remained un-implemented. Many state governments already offer much more than this and so this year, the coverage was upped to Rs 5 lakhs per family, and dubbed the “world’s largest healthcare programme,” with the Central government wanting this to appear “aspirational”.