Roche is dragging companies that are manufacturing similar medical products through endless legal battles, discouraging them from entering the market and hence affecting the availability of affordable medicine. 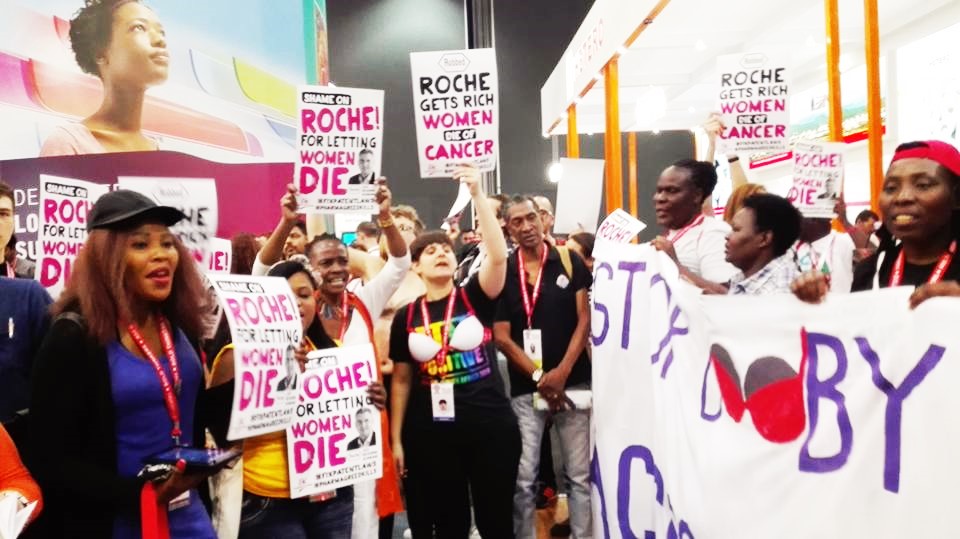 “A young friend, an NGO worker with a very modest income, was diagnosed with HER2+ breast cancer. I did some research for her and articles on the internet appeared to suggest that a drug called Trastuzumab created by a Swiss company called Roche was her best option, but she claimed that her doctor hadn’t mentioned it at all. Confused and angry, I accompanied her for a consultation with him. He was brutally honest, and said that a single dose of Trastuzumab would cost more than six months of my friend’s salary, and that was why he had refrained from recommending it.” Kalyani Menon-Sen, a women’s rights activist in India, was recounting her experiences of meeting women with cancer who were in desperate need of this drug.

“What was the point of assuring patients that a medicine could save their lives if they couldn’t afford it? It was at this point that the gravity of the situation hit me, where because of one company’s greed, a life-saving drug is kept out of reach for women with cancer. The only motivator for the rapacious pricing policies of Roche and other large pharmaceuticals overseeing the production and distribution of the new cancer drugs is greed,” she concluded.

Menon-Sen is also a co-ordinator for Campaign for Affordable Trastuzumab, an India-based organisation of patients and women’s health groups fighting to make the drug affordable. Several women activists in South Africa, Malaysia, Brazil, England, Argentina and France share Menon-Sen’s concerns too. They spent the better part of February 9 joining in international demonstrations against the Swiss pharmaceutical company Roche. It’s been at the receiving end of a great deal of censure for years now, because of the high prices of its drug Trastuzumab (its market name is Herceptin around the world, and Herclon in India), a medicine that is essential for treating a particularly aggressive strain of breast cancer called HER2+. 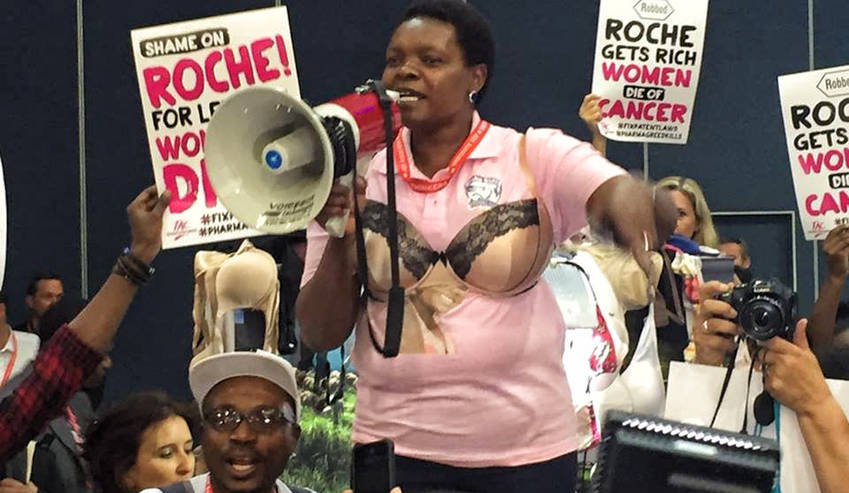 The protests were organised partly in memory of Tobeka Daki. Courtesy: Lawyers Collective

The protests were organised partly in memory of Tobeka Daki, a South African activist from Mdantsane who died from HER2+ breast cancer in November last year because she couldn’t afford the drug, and the cancer eventually spread to her spine. She’d spent years campaigning vociferously for making the drug affordable, organising pickets outside the Roche office in Pretoria and mobilising protests across the country. Priced at 485,800 ZAR (Rs 2,426,507.64), in the private sector a year’s course of the drug was more than five times her annual salary. According to Lotti Rutter, Advocacy and Campaign Manager for  Treatment Action Campaign, South Africa, a civil society organisation campaigning for HIV and other patients’ rights, Roche has patents on it in South Africa (and 20 other countries around the world) until 2033.

India has an especially complex association with Roche. Its patent for Trastuzumab lapsed in the country four years ago, and we have the labyrinthine bureaucratic procedures of the Kolkata Patent Office to thank for that – for whatever reason, the company didn’t appear for a ‘post-grant challenge’ to its patent in time. It eventually gave up on pursuing the renewal of its patent. But Roche is still managing to make life difficult for manufacturers of ‘biosimilars’ – medical products that are almost identical to the original biological drug.

Using Trastuzumab was first approved in the country in 2000. It was initially imported, and priced at a whopping Rs 1,35,200 for a 450 mg vial (depending on your condition and type of cancer, you would need anything from 2 mg to 8 mg every 90 minutes for the first 12 weeks of chemotherapy). The health ministry insisted on a compulsory license for the medicine in 2013, and Roche then made the magnanimous move of offering a 30% discount – reducing the price to Rs 75,000 a vial.

But in 2015, the government of India added Trastuzumab to the National List of Essential Medicines, and in May last year, placed a price cap of Rs 55,812 on it. Unsurprisingly, while this move was applauded, at the time activist Leena Menghaney was doubtful about how helpful the cap would be, because the medicine would still be unaffordable for most women cancer patients in the country. Public interest groups have continued to demand stricter price caps.

Once Roche’s patent expired in India, other biosimilars created by the Bangalore-based company Biocon, and US-based company Myan Inc., amongst others, entered the market. Roche then sued these companies, along with the Drugs Controller Regulator of India, for misrepresenting their medicines Canmab and Hertraz by referring to them as ‘biosimilar Trastuzumab’. (It had used litigation against manufacturers of other medicines in the past as well.) It also declared that Biocon’s packaging infringed copyright by including details about Roche’s data on Trastuzumab. (Emails and attempts to contact Roche were unsuccessful.)

According to a statement put out by Lawyers Collective (its legal team has represented patient groups in courts for similar litigations against Roche), Roche’s actions “seemingly appeared as an attempt to delay the entry of biosimilars in the market,” and didn’t stop with that case (even though the Delhi high court gave an interim order that the companies couldn’t claim similarities with Roche’s brands). It subsequently sued the companies Reliance Life Sciences and Zydus Cadila for their versions of Trastuzumab too. Although the companies are still allowed to sell their drugs, the Delhi high court is still debating on whether the approvals granted to Biocon and Mylan correspond to the Guidelines on Similar Biologic, and the case is now going be heard next month.

What this means is that the position of biosimilars is precarious, even if they’re still allowed to sell their products. According to Anand Grover, the director at Lawyers Collective, the endless legal battle is discouraging other players from entering the market, while simultaneously affecting the availability of affordable medicine to those who need them desperately. “Roche is using means other than patent infringement suits to prevent generic competition from affecting their monopoly on products. From suing the Indian drug regulator for approving competing biosimilars to challenging the locus standi of patient groups, it has been using all possible routes to block competition to their products. The Trastuzumab case is yet another example of this. Roche even claimed that Biocon’s reference to Trastuzumab clinical trial data on their package insert infringed their copyright. The onslaught of litigation is relentless, aimed not only at casting doubts on the legality of the regulatory processes but also to send the signal to competitors, that irrespective of the legal outcomes they will have to face long and expensive legal proceedings,” he says.

In the meantime, what are the cost-effective treatments available to breast cancer patients in India? According to Dr. Jayanti S Thumsi, a Bangalore-based surgeon specialising in Breast Oncology Surgery, the situation is looking bleak because the biosimilars are also reasonably expensive and still unaffordable for most people. “Approximately 30% of breast cancer patients are HER2+, and while Trastuzumab could be life-saving, and it’s a good thing that targeted therapy [treatments designed to target particular characteristics of breast cancer cells] is available, it is exorbitantly priced,” she said. “Typically 18 Trastuzumab injections are recommended over a year, and since most patients can’t afford this, we can only offer them routine chemotherapy. Ideally, the medicine’s price should be reduced so that it’s accessible for everyone,” Thumsi added.

Even as pharmaceutical companies like Roche end up violating HER2+ patients’ right to health, while organisations like Lawyers Collective continue to fight Roche’s litigation attempts, one of the options the government of India has to introduce is more stringent price controls and closer scrutiny of Roche’s harassment of companies manufacturing biosimilars. Otherwise we might end up with a situation where Roche reaches near-monopoly status again, all because it is used to bringing out the big guns when cornered.

This article was originally published on The Ladies Finger.