Bangladesh has virtually eliminated open air defecation, bringing it down to only 1% of its population who do not have access to indoor toilet facilities. 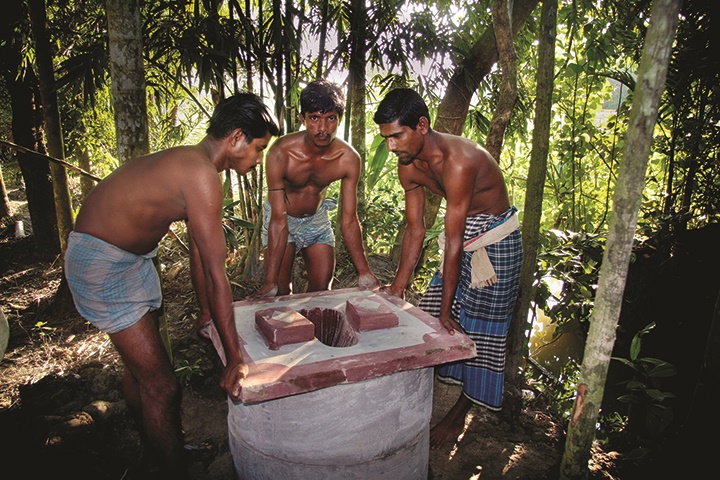 For most of her 50 years, Rokeya Begum has lived without a toilet in her house – waiting for the curtain of darkness to go out to the fields or the jungles near her village to defecate, come winter, summer, rain or illness. Not any more though. With Bangladesh declaring itself virtually open defecation free, Rokeya Begum, too, has a sanitary latrine in the tiny home she shares with five other family members.

In a remarkable achievement, official data reveals that open defecation has reduced to only 1%, a “milestone change” from the 42% in 2003, making it a role model for other countries in the region. Approximately595 million people in India, about half the population, do not use toilets. In Pakistan the number is 41 million, or about 21%, while for Nepal the number is 15.5 million, or 54% of the population. Only Sri Lanka, of all other South Asian states, has managed, like Bangladesh, to virtually wipe out open air defecation.

“We have no sanitation problem. Although we are poor, we are living in society now with dignity,” Rokeya Begum, who lives in Kishoreganj’s Gobaria village, says with a broad smile. Like poor households in the country, her family would also use the roadside, open fields and jungles to defecate. Then things changed when the local administration helped her install a sanitary latrine in her home a few years ago.

As Bangladesh makes huge strides towards achieving the Millennium Development Goals (MDG), virtually the entire country has been brought under the sanitation umbrella. It was a life changer for Rokaya and millions of Bangladeshis, particularly women, who put their health at risk as they waited endless hours for nightfall to defecate, as well as bore the ignominy of the practice.

Moreover, open defecation contaminates fruits and vegetables, pollutes surface and groundwater and spreads diseases. Diarrhoeal diseases remain common in Bangladesh, causing around 100,000 deaths a year, due to contamination of food and drinking water, according to icddr,b.

There has been some change though. Citing findings of a BRAC study, director of the group’s WASH (water, sanitation and hygiene) programme Dr M Akramul Islam said waterborne diseases declined by 7% during 2006-2010 – an indication of the improved sanitation coverage benefiting the health profile of the country.

There is enough indication that social norms are changing. Having a household toilet has become a status symbol, signifying dignity because people measure status of a household after seeing the condition of its toilet, said Dr Nehal Karim, a social science professor of Dhaka University.

It is a deciding factor in marriages too. “The condition of latrines reveals the environment where a boy or a girl grows up,” Nehal.

A 2011 study by the Water and Sanitation Program (WSP), a multi-donor partnership administered by the World Bank, revealed that disease prevention, elimination of bad smells, and environmental improvement were identified as the principal benefits of being free from open defecation. Social honour and dignity, peace and prestige were also identified as popular benefits.

Women are being empowered in society as they are included in decision-making process to install latrines in their households. Household heads give preference to a woman’s decision on the location and type of latrines.

The political commitment to sanitation has been a major driving force for the sanitation movement with the government taking various policy reform initiatives to achieve its target.

“The political commitment of the government has led to remarkable improvement in the sanitation coverage in Bangladesh,” Local Government, Rural Development and Cooperatives Minister Khandker Mosharraf Hossain said in Dhaka recently, while stressing that the country with a population of 160 million had made significant progress towards its sanitation goals in the last two decades.

Bangladesh also observes the National Sanitation Month in October each year with the aim of motivating people to use sanitary latrines.

The partnerships that made it possible

To improve the water and sanitation sector, the Bangladesh government built strong partnerships with donor agencies, NGOs and the private sector. Development agencies like UNICEF, DFID, WHO and the World Bank as well as international and national NGOs like Water Aid Bangladesh and BRAC have supported various water and sanitation programmes under the supervision of the Local Government Division.

According to Khairul Islam, the government’s partnerships have helped in reducing defecation significantly and improving sanitation.

BRAC, for instance, created sanitation entrepreneurs in over 250 rural upazilas, sub-districts, out of 489. This helped in bringing down open defecation in Bangladesh, said the group’s Akramul Islam.

Besides, the Department of Public Health Engineering is promoting sanitation under the Bangladesh Rural Water Supply and Sanitation Project (BRWSSP) 2012-17, which aims to promote sustainable sanitation services, particularly for improving the quality of coverage for the existing population using unhygienic latrines.

Bangladesh has also ratified the Convention on the Rights of Persons with Disabilities (CRPD) and backed the Rights and Protection of Persons with Disabilities Act. With these legal instruments, the government is giving priority to the differently abled and their right to dignified, safe, sustainable and affordable access to water and sanitation services, said an official.

Though Bangladesh has become a role model for the region, achieving 100% sanitation coverage continues to be a challenge. The sanitation sector faces several hurdles such as water scarcity in some areas, quality of service and covering hard to reach areas like hilly regions, chars and tea gardens. Only 35.8% families have improved sanitation facilities in the hard to reach areas, according to official data.

Ensuring sanitation in rapidly growing urban slums is also a tough task with the country’s urban population growing at 3.52%, the highest in the South Asia.

In Khairul Islam’s view, it is possible to bring people living in hard-to-reach areas under the sanitation umbrella but ensuring it for the floating urban population is a concern.

This article was original published on The Third Pole. Read the original article.