The award was bagged by Youyou Tu for her discovery of artemisinin and by William Campbell and Satoshi Omura for discovering Ivermectin, a drug used to cure river blindness. 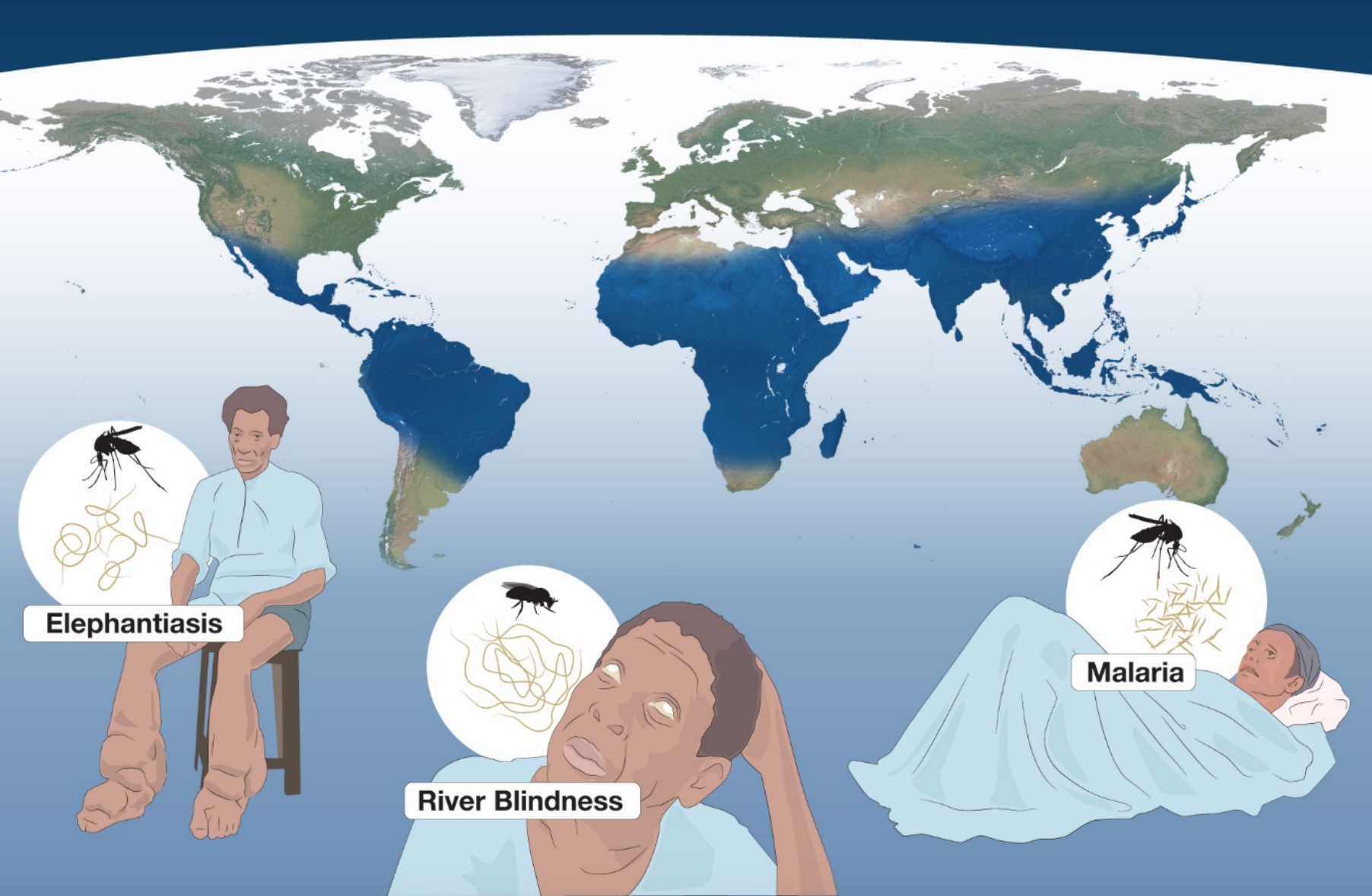 The discoveries of potent cures against elephantiasis, river blindness and malaria has won the Nobel Prize for physiology or medicine, 2015. Source: nobelprize.org The discoveries of potent cures against elephantiasis, river blindness and malaria has won the Nobel Prize for physiology or medicine, 2015. Source: nobelprize.org

There were an estimated 207 million cases of malaria in 2012 according to the official bulletin of the World Health Organisation, of which 627,000 died but no one is sure and a conservative estimate of the range is between 73,000 and 789,000 deaths. The problem is that it is impossible to gather accurate mortality data from some countries, particularly African ones that suffer the most from the disease. Some 90% of all malaria deaths occur in sub-Saharan Africa and 77% occur in children below 5 years; 1,300 children die each day – that’s one child every minute. Malaria remains a major scourge in the modern world despite recent advances in treatment, prevention and control.

Twenty years ago, malaria was responsible for at least one million deaths per year largely because chloroquine, the mainstay of therapy till then, was becoming rapidly ineffective in treating falciparum malaria. This was the time a new tongue-twisting drug called artemisinin that was exquisitely effective against the malarial parasite emerged from China. Few know that a secret military project in communist China was responsible for one of the greatest drug discoveries in modern medicine. Artemisinin is today the most effective compound against all forms of malaria.

Louis Miller, a malaria researcher from the US National Institute of Health (NIH) was shocked to learn in a meeting in 2005 in Shanghai that not a single Chinese doctor knew the identity of the scientist to have discovered artemisinin. Therefore, after intense research, Miller found along with his NIH colleague Xinzhuan Su that major credit would have to go to the lady pharmacologist Youyou Tu. Tu had had worked on artemisinin in the 1960s and 1970s at the height of China’s Cultural Revolution, when scientists and other intellectuals were considered class enemies. The Chinese were concerned that the Vietnam war was losing more soldiers to malaria than to American armory. Chairman Mao Zedong ordered a secret drug discovery project called ‘523’, for the date it was launched, May 23, 1967.

Malaria, scourge of the tropics

Thousands of synthetic compounds were tested without success by hundreds of Chinese scientists while the might of the American pharmaceutical industry too drew a dud. The Chinese were compelled to turn to their traditional medicines and this is how the Academy of Traditional Chinese Medicine in Beijing chose Tu who had studied both Chinese and Western medicine to participate in the search. Tu, with three assistants and after reviewing 2000 recipes for ancient Chinese remedies, shortlisted a compound from a plant called sweet wormwood (Artemisia annua) that grew throughout China. The recipe was 1,700 years old and the extract artemisinin was 100% effective in mice and monkeys. Tu volunteered to be the first human to be tested for ill effects of the extract.

The judges in Stockholm cannot be applauded enough for awarding this year’s Nobel Prize for physiology or medicine to Tu for her discovery of artemisinin and to William C. Campbell of Ireland and Satoshi Omura of Japan for discovering a new drug against the roundworm.

There is delicious irony in that a Chinese middle rung scientist taking resource to more than a thousand years old traditional medical literature beat the entire Western conglomeration of Big Pharma for the most effective current treatment against malaria. The WHO in the 2013 World Malaria Report noted that 52 countries are on track to reduce malaria cases by 75%, and 59 are on track to reverse incidence of malaria in their regions. The problem is that these leading 52 countries represent a mere 4% of the world’s malaria cases.

Currently the consensus in the war against the malarial parasite is a five-fold approach: develop new antimalarial drugs, provide malaria-preventive items such as nets/insecticides, produce a safe and effective vaccine, control mosquito breeding habitat by giving effective health education, and better infrastructure. The fifth approach, also the most controversial, is eradication of mosquitoes by genetic transformation: where a suicide protein is inserted in the male mosquito DNA that ensures the offspring’s do not live to puberty. As a result, mosquito populations have been lowered by almost 90% in certain areas of Cayman Islands and Brazil.

Unlike dengue fever, malaria is caused neither by a virus or bacteria but by a single celled microorganism called a protozoa, which comes from the Plasmodium genus. There are five types of Plasmodium, and hence five kinds of malaria: falciparum, vivax, ovale, malariae and knowlesi. P. falciparum and P. vivax cause the largest number of deaths. The mosquito that spreads malaria is of the genus Anopheles, which is a Greek word meaning “without profit or worthy use”. There are 460 species in this genus and about 100 of these are capable of transmitting human malaria. Falciparum malaria is transmitted by 30-40 species. It is important to remember that it is the female mosquito alone that transmits the malaria parasite when she sucks human blood in order to obtain proteins for her eggs. She mates once in a lifetime for not more than 15 seconds to lay more than 500 eggs. She is less than 2 millimeters long, does not live longer than a month, and will not travel more than 15 meters in her lifetime.

A French army doctor named Charles Leveran won the 1907 Nobel Prize for medicine for spotting parasites inside the red blood cells of patients infected with malaria. But Sir Ronald Ross had worked out the entire life history of the Plasmodium parasite while working in Kolkata and had won the medicine Nobel Prize in 1902. Malaria or studies connected with it have bagged yet another Nobel Prize more than a century later.

At the same time, it can’t be overstated that the plasmodium parasite has always been a canny creature capable of counterattack against the most formidable drugs produced by man. Recent studies have confirmed emergence of artemisinin resistant Plasmodium falciparum parasites in Southeast Asia, especially in Myanmar, western Cambodia, Thailand, Laos and Vietnam. Poor quality artemisinin-based combined therapies, mono therapies with sub-therapeutic ingredients and genetic modification of the parasite may explain the resistance. New antimalarial drugs are in the pipeline but they will not be available for clinical use in the near future. It is imperative that radical measures are adopted to prevent resistance to artemisinin from spreading to India and Africa.

I have watched from a distance two patients die of multi-organ failure from vivax malaria in the intensive care of my hospital just last week; these were gruesome deaths due to delayed and consequently ineffective treatment. It is not uncommon to come across patients from rural areas that arrive in hospitals in India too late and in an advanced state of instability to be successfully managed by the best of treatment.

Omura and Cambell between the two of them discovered a new drug called Avermectin, which significantly reduced incidence of river blindness, which causes blindness because of corneal inflammation, and lymphatic filariasis that causes huge chronic swelling. This is socially embarrassing and can be clinically debilitating. Omura identified 50 Streptomyces bacteria cultures capable of fighting lethal microorganisms and Campbell found that one of Omura’s cultures was very effective against parasites. Campbell called the new agent Avermectin. It has since been modified to a more effective version called Ivermectin.

River blindness (or onchocerciasis) is spread by black flies that breed in fast-flowing streams (so the term ‘river blindness’). Adult female worms may live up to 15 years beneath human skin and produce microfilariae that migrate mainly through the skin and invade the eyes. Around 25 million people are infected every year, 300,000 are blinded and an additional 800,000 are visually impaired. River blindness is the second leading cause of blindness after trachoma. Against it, Ivermectin is effective as a single oral dose of 150 mcg/Kg that is repeated once or twice a year and may be given for 10-14 years, the lifespan of the female worm.

Mosquitoes yet again transmit filariasis: the infective larvae migrate to the lymphatic system, the adult worm causes chronic lymphatic obstruction by inflammation and in some patients, massive swellings. Ivermectin has been found to be effective as treatment and also for prevention in endemic areas. The Anopheles, Aedes, Culex and Mansoni mosquitoes can transmit filariasis. The two diseases are also caused by nematodes, or roundworms.

The Nobel Committee of 2015 must be congratulated for acknowledging basic plodding research that has saved or positively altered millions of lives in the poorest countries of the planet. The emphasis has shifted to infective diseases that continue to ravage populations from all sections of society. A mosquito in Mumbai is as lethal to a corporate CEO as she is to a slum dweller because she has access to both. But the Indian government paradoxically has slashed central government health spending by 15% compared to last year. It has one of the lowest health-budgets in the world, a paltry 1.2% of the GDP. The National Health Mission has substantially cut down funds to states for reproductive, newborn, maternal, child health programmes. The Lancet recently reported that “As many as 15 of the health ministry’s national programmes, including tobacco control, mental health, prevention of blindness, trauma care, elderly care, and human resource development have not been allocated a single rupee…”. The Swedish Nobel Committee of 2015 manifestly appears to be on a different planet than the Indian Ministry of Finance.