Mind Your Own Business, Ramdev

An AIIMS doctor's open letter to the owner of a major business house.

First things first, I decline to prefix your name with Baba for a simple reason. For me, Baba is a reverence reserved for the likes of Farid Shah, Bulle Shah or Rehman (Baba). In my honest opinion, self-proclaimed Babaship (I know it’s not a word) is nothing more than optics for someone like you, a successful businessman. My favorite baba, Baba Farid Ganj-e-Shakar had once said, “If you want the position of a saint, remain away from the king’s family.” How apt, isn’t it?

Anyway. Coming to your recent vulgar mockery of allopathy and allopathic physicians, I can understand your frustration at this uncalled for derision. After all, a sick human is the easiest wager for the healer – I mean healer from any branch of healing. For the vulnerable sick of this country, who have literally been disowned by the state, healers can smell ample opportunities of money heist. Since you like to talk in simple idioms, its like hounds smelling meat. No wonder the pandemic has created enough meat for all types of hounds to come and feast. But Ramdev ji, even hounds respect each other. They respect strength and most importantly, know their limitations and vulnerability. It’s a different matter that worse than hounds are jackals. They are the cowards who howl when hungry, who howl when angry and who howl when they fear that a stronger opponent is out there and will get away with the half-eaten carcass. Let us vow to not behave like jackals at least!

As for your very boorish condemnation of allopathy and doctors, I wouldn’t be wrong to assume that your arrogance got the better of you in that moment and you got carried away. What else can explain such silly comments from a smart businessman like you? Or were you naïve enough to be unaware of the backlash from my fraternity? I don’t think you are that stupid Yadav ji. Everyone guards their bread like you do, doctors included. By the way, lets put this on record that what you said in that video about doctors and allopathy was not only unscientific, but smelled of ignorance on your part. Ignorance smeared with hate. When ignorance combines with hate, it becomes such a toxic mix that it even singes the hater. In fact, I have seen such ignorance from you on many other occasions. But let us not discuss those in the present moment because I sense you are already under significant pressure for your silly comments, else why would you apologise to my fraternity and that too on a mere friendly rap on the knuckles from the health minister of the country who also happens to be an allopath.

What intrigues me about your condemnation of allopathy is not your lack of knowledge but your self-vainglory. You are so absolute about your science of Ayurveda that it makes me look at all you do with suspicion. Absolutism is the biggest enemy of rationality. Your claims to cure diseases as serious as cancers is laughable Ramdev ji. Do you even realise that you have become a laughingstock for the world when you claim to treat blood cancer in umpteen videos? And yes, it is possible that a few patients of blood cancer (while in your care) might have gone into remission, but to be so sure of cure is nothing less than unsullied foolishness. I know you have monetary interests when you claim so but then absolutism is what will finally get the better of you and your 9500 crore rupees business empire. I would thus advise caution. 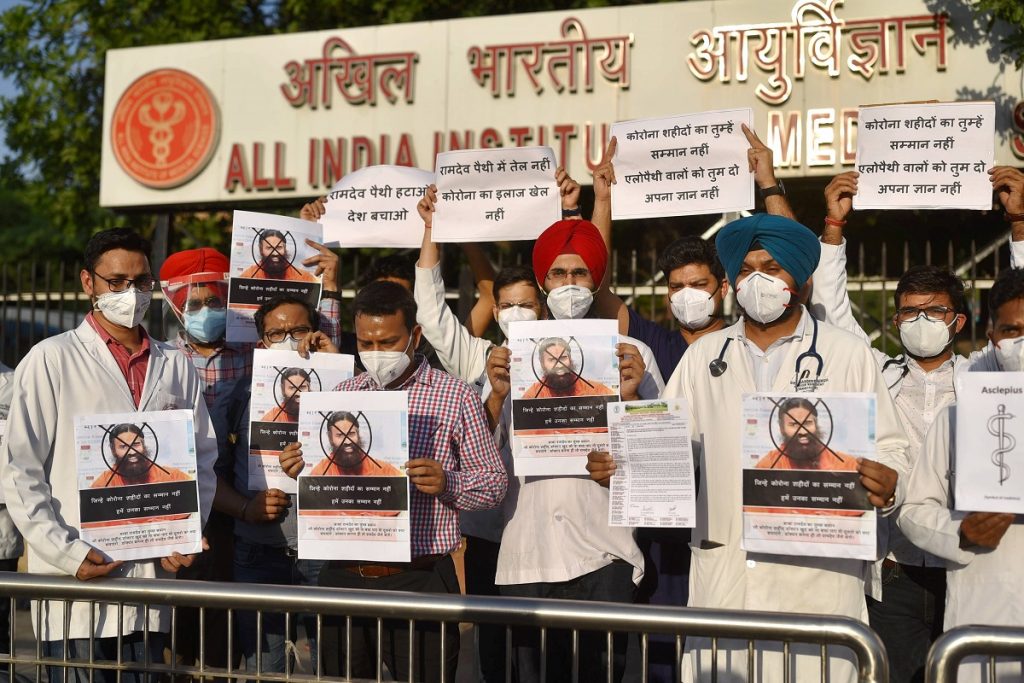 Tall claims, whether of Ayurveda, homeopathy and allopathy, need scrutiny and validation. Your absolutism is what endangers your field and your words. We live in a world of suspicion. To question the doctor is correct. To conclude her/his actions without the scrutiny of science is a sin. For example, many liver specialist friends of mine have told me about the disastrous effects of the chemical giloy, which I am told is also used in your wonder drug Coronil. They are seeing significant toxic effects of giloy on the liver. But they are still in the stages of scrutinising their results. They are seeking validation. They are questioning their own belief before this could be brought into public domain. That’s how allopathy works, Ramdev ji. That’s how science works. To be honest, I know that somewhere deep in your heart you too respect allopathy and science. Why else would you bring an allopathic doctor on stage every time you claim a cure for a disease. I have seen so many videos where you ask him to validate what you claim. Strange indeed!

This is not a battle of ‘my field versus your field’. Even if your interests are monetary, science and rationality should win. I am with science and the only thing that science has taught me is to suspect my own hypothesis, to discard absolutism and to bring facts to scrutiny. I suppose as a businessman who has such a phenomenal success in the field, you should really mind your business. It is my humble request to you that you should leave science and rationality to us. Remember, history has a knack of catching up with everyone, be they an unethical doctor, an unjust ruler or a counterfeit Baba.