Despite several ground reports on the lack of medicines, the home ministry only admitted that there was a shortage of baby food on two days. 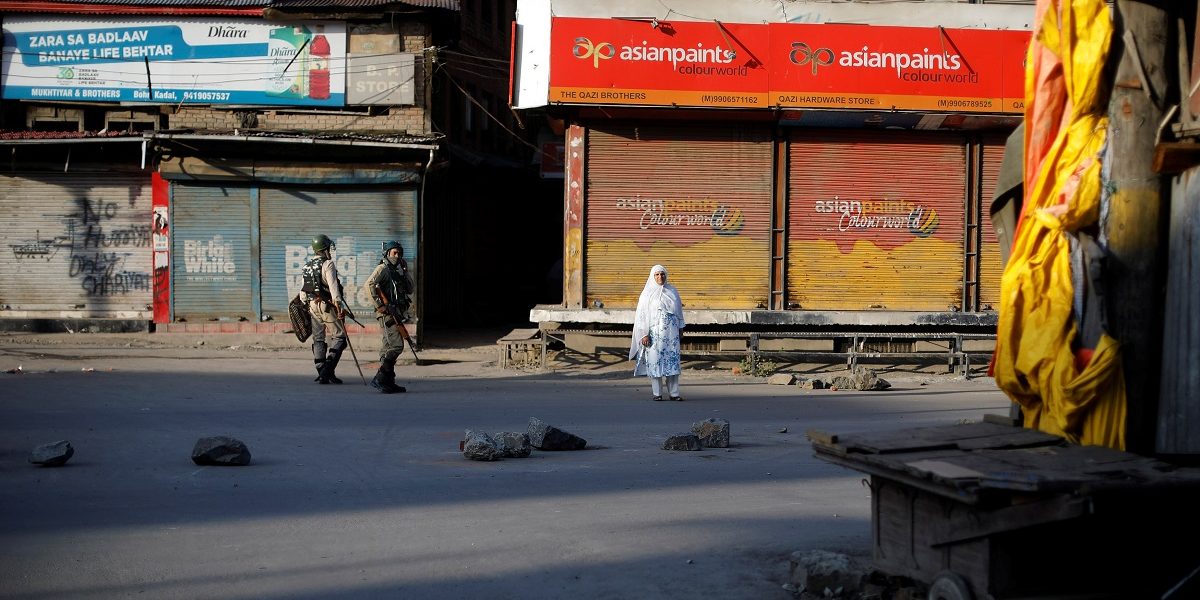 Indian security force personnel patrol past a Kashmiri woman in a deserted street during restrictions after scrapping of the special constitutional status for Kashmir by the Indian government, in Srinagar, August 20, 2019. Photo: Reuters/Adnan Abidi

New Delhi: The ministry of home affairs has refuted the claim put forth by several news outlets on a healthcare crisis in Jammu and Kashmir. While doing so, it also admitted that baby food ran out in the Valley for “nearly two days” amidst the movement restrictions and communication lockdown there.

Late on Saturday, August 24, the official handle of the department of Information and Public Relations of the government of Jammu and Kashmir (@diprjk) released a series of tweets issuing clarifications on the situation of availability of lifesaving medicines in J&K.

These tweets were also published by the official handle of the spokesperson of the ministry of home affairs (@PIBHomeAffairs) on Sunday.

Below are the two Twitter statements on the issue. News outlets, including The Wire, have published reports on the medicine shortage in J&K amidst the virtual lockdown. J&K commissioner secretary of information (among other charges) M.K. Dwivedi retweeted his department’s tweets on the issue.

The Wire‘s ground report from Srinagar on August 22, had essayed the cases of men like Rizwan Nabi who had to travel 60 km from Meemandar in Shopian district to Srinagar city to buy medicines for his diabetic mother. Nabi had told the correspondent that his mother had had to go without medicines for two days as local drug shops had run short of supplies.

A pharmacist in the commercial hub of Lal Chowk in Srinagar had showed the correspondent a four-page list of medicines he had ordered days ago. Of the 127 listed items, he said he had received only 79 items.

The MHA also claimed that medicines worth Rs 23.81 crore have reached end-user retail shops in the last 20 days, a number which is allegedly “slightly higher than (the) monthly average.”

All 376 notified drugs and 62 life-saving drugs are also reportedly available at government shops and private retailers’. Both categories of medicines have stocks that will reportedly last 15-20 days.

The MHA also tweeted that the average delivery time from Jammu, where it says most distributors are from, is 14-18 hours. The tweets do not specify whether the time frame would be the same for deliveries across the Valley.

There is also no case of overpricing, according to the MHA. Finally, when it comes to baby food, the MHA says there is stock that will last three weeks and that there are three people stationed at Jammu and Chandigarh for quick despatch of baby food, and medicines. At which point in the 21-day shutdown was there a two-day baby food shortage is not mentioned.

On August 17, the Lancet, a weekly peer-reviewed medical journal, published an editorial titled ‘Fear and uncertainty around Kashmir’s future‘ which said that the military presence in the state “raises serious concerns for the health, safety, and freedoms of the Kashmiri people”. The Indian Medical Association (IMA) retaliated with angry criticism of Lancet in a letter addressed to its editor-in-chief, Richard Horton.