Earlier, villagers had complained of no testing facilities, lack of doctors and no sanitation drives. 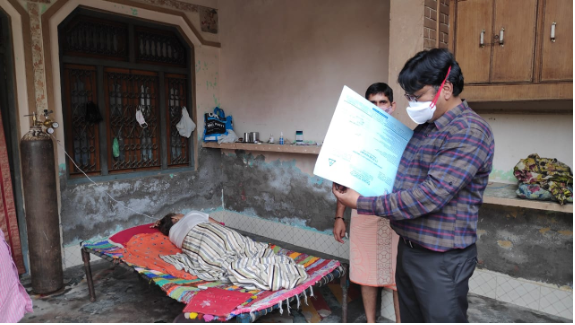 New Delhi: After The Wire reported on the lack of testing and other medical facilities in an Uttar Pradesh village in Jewar, Mewla Gopalgarh, the concerned sub-divisional magistrate, Rajnikant, sent one sampling team, two teams for conducting door to door COVID-19 tests and checking for influenza-like illnesses and one team for sanitisation of the village.

The medical team was sent on Monday, after The Wire reported on the woes of the sick in the village on Saturday.

SDM Rajnikant told The Wire that Harveer Kumar, who was featured in The Wire’s report, is now being monitored and is stable. “We are working to ensure the welfare of the village,” he said.

After @thewire_in‘s report on a village in Uttar Pradesh’s Jewar on no testing facilities and lack of medical treatment of patients during the Covid-19 second wave, a team has been sent by the DM Suhas LY to conduct testings in all houses complaining of symptoms. 🙏

According to a former pradhan of the village, Yogesh Talan, till about 2 pm on Monday, more than 50 COVID-19 tests had already been conducted in the village.

Earlier, villagers had complained of no testing facilities, lack of doctors and no sanitation drives in the village.

Talan felt The Wire’s article had a role to play in the government action. “This is your story’s impact. Today, the government has sent a team for testing,” he said.

The Wire‘s report had detailed how in Mewla Gopalgarh village, roughly 70 km from the national capital of New Delhi, a makeshift hospital has emerged for COVID-19 patients as well as for people complaining of COVID-19 symptoms as they struggle to find a bed in hospitals, both government and private.

What the villagers called a “hospital” is actually an open ground near the village’s entrance where several sick people lie on a cot under a big neem tree. Attached to the tree were glucose bottles to be used for patients from time to time.