Visuals of Mahant Nritya Gopal Das, president of the Shri Ram Janmabhoomi Teertha Kshetra Trust, at the event in Ayodhya show he was not wearing a mask. 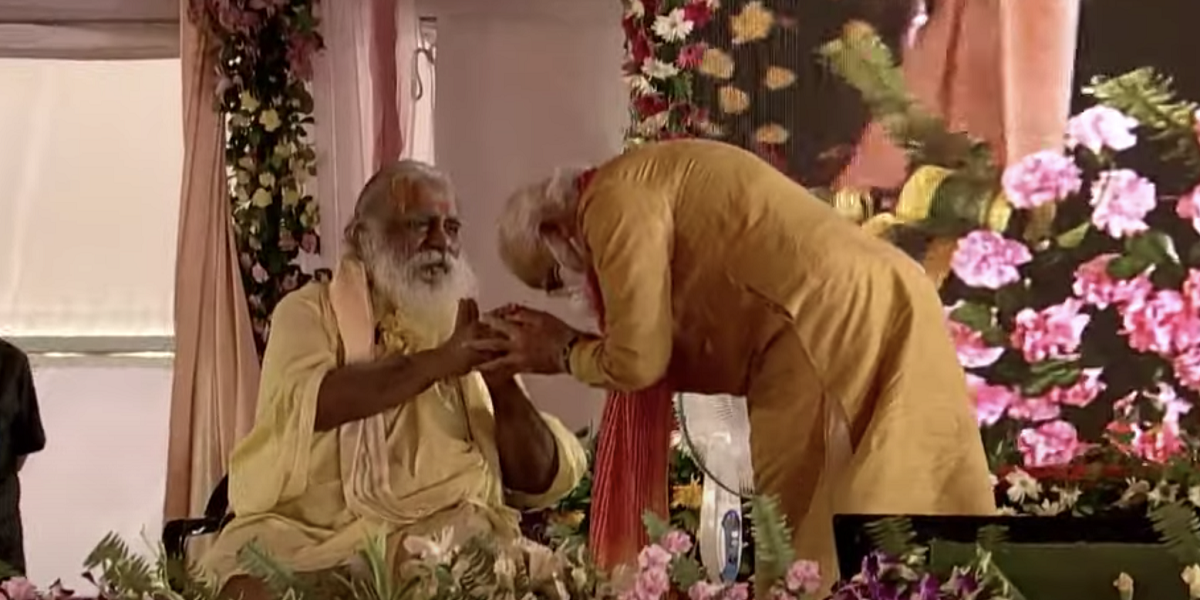 New Delhi: Mahant Nritya Gopal Das, who was one of the five persons on stage for the bhoomi pujan for a Ram temple in Ayodhya, has tested positive for COVID-19.

While it is yet unclear when Das contracted the coronavirus infection, photos of the event tweeted by news agency ANI show him standing in between Modi and Adityanath without a mask. During the ceremony, visuals show that he came in close contact with the PM.

According to reports, Adityanath has taken note of the Mahant’s health situation and he will be shifted to the Medanata hospital in Gurgaon for better treatment. Though he does not have fever, Das is experiencing some breathlessness, Mathura district magistrate Ram Mishra said.

In the lead up to the event, the priest who was going to perform the ceremony and 16 policemen monitoring the site tested positive for the viral infection, prompting calls for the event to be postponed.

In March, reporting for The Wire, Sharat Pradhan wrote that Das saw himself as the ‘natural custodian’ of all things Ram in Ayodhya. He wrote:

Both in his earlier role as a prominent face in the Ramjanmabhoomi campaign and now in his official capacity, Nrityagopal Das saw himself as a natural custodian of everything that pertains to Ram’s claimed birthplace and, of course, the proposed Ram temple.

Before he was unanimously elected as president of the Trust, Das was chief of the Ram Janmabhoomi Nyas, the Vishwa Hindu Parishad’s trust to promote the construction of a Ram temple on the disputed site in Ayodhya. He was charged by the Central Bureau of Investigation (CBI) in the demolition of Babri Masjid.

On the direction of the Supreme Court, the Centre in February this year constituted the Shri Ram Janmabhoomi Teertha Kshetra Trust, but left the posts of president and general secretary vacant. This was to allow the autonomous body to elect Das and VHP leader Champat Rai to these positions.

Ayodhya MLA Ved Prakash Gupta said at the time that if the government had appointed Das or Rai ‒ who face charges in the Babri demolition case ‒ as members of the trust, it could have created a controversy.

“Some people could have gone to the Supreme Court. That would have led to a delay of two-three months in the work of forming the trust. So, it was avoided,” Gupta said.