According to the analysis, eight states had mortality rates exceeding 200 deaths per 100,000 people – which is higher than that of 141 countries. 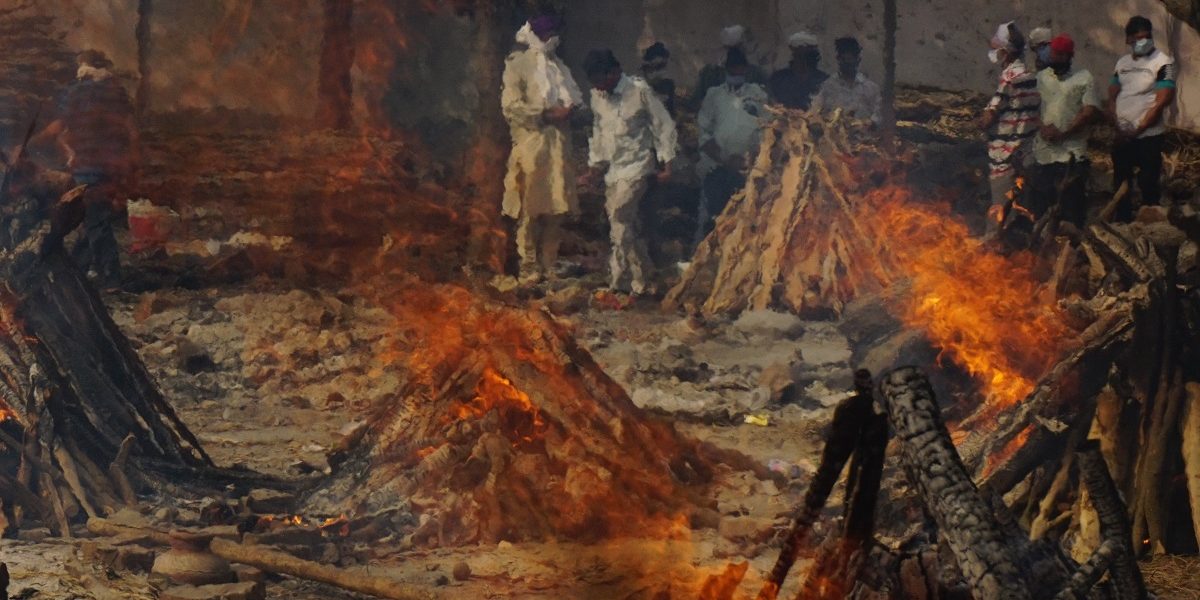 Funerals of COVID-19 patients being conducted at the Ghazipur crematorium in April 2021. Photo: Shome Basu

New Delhi: As many as 4.07 million people in India are estimated to have died during the COVID-19 pandemic in 2020 and 2021, according to a new analysis. This is eight times more than the number of COVID-19 deaths India has officially registered. Even now, the official toll is only 0.5 million.

This analysis attempted, for the first time, to estimate excess deaths during the COVID-19 pandemic worldwide, and was published in The Lancet on Thursday. It has determined that 18.2 million people in 191 countries have died since March 2020 – versus 5.94 million officially recorded deaths.

Overall, it suggests that India had the highest mortality of any country during the pandemic.

The analysis was conducted by a team of experts at the Institute for Health Metrics and Evaluation (IHME). The IHME is an independent research organisation in the US. It has been issuing various epidemiological forecasts since the pandemic began.

The second-worst-hit country is reportedly the US, with 1.13 million deaths in 24 months – 1.14-times more than its officially recorded deaths. Five more countries had excess deaths exceeding 0.5 million in this period: Russia, Mexico, Brazil, Indonesia and Pakistan.

These seven countries together account for more than half of all excess deaths due to COVID-19 in the 191 countries.

Note here that the estimated excess deaths are overall deaths during the pandemic – and not necessarily due to COVID-19.

“The magnitude of disease burden might have changed for many causes of death during the pandemic period due to both direct effects of lockdowns and the resulting economic turmoil,” the analysis paper read.

The research team computed excess COVID-19 deaths data with the help of ‘all-cause mortality’ figures – deaths due to all causes in a country – that countries release every year.

Some countries also share ‘cause-specific mortality’ data – but this was limited to 36 countries in the last two years, according to the paper. Murad Banaji, a mathematician and disease modeller, said it is nearly impossible to attempt such an exercise in India at least.

“I can say with complete certainty about India that it is going to be an absolute nightmare to try to separate out how many excess deaths are due to COVID-19 itself,” he told The Wire Science. Banaji was not involved in the IHME analysis.

According to his own estimates published last year, India could have had 3 million excess deaths in 2020 and 2021 together.

Bodies of the deceased buried in the sand near the banks of the Ganga, allegedly due to shortage of wood for cremation, Shringverpur Ghat, Prayagraj, May 15, 2021. Photo: PTI

The baseline figures came from CRS numbers for 2018 and 2019. Then they calculated the excess in 2020 and 2021. When they compared the numbers to the actual number of deaths registered in the same years, they found that the difference was a stunning 4.07 million.

This exercise is only deceptively simple, as Banaji said earlier. In India, death registration trends haven’t been consistent over the years in the first place. A state might register only half the deaths in a given year compared to the last, for example. This renders the baseline itself to be unreliable.

To sidestep this possibility, the research team also used data from another source: the well-known Global Burden of Disease Study for 2019.

Second, the CRS was also available only for 12 states. How did the team calculate excess deaths data for the other 16? The paper only said:

“For locations without weekly or monthly reported all-cause mortality data, we developed a statistical model that captured the relationship between the key COVID-19-related covariates, such as seroprevalence, infection-detection ratio, and other population-level burden of disease metrics, and excess mortality rate.”

In fact, the authors used this information in place of national registration data wherever the latter wasn’t available. The Wire Science also wrote to Haidong Wang, an associate professor of health metric sciences and the analysis’s lead author, for more information on this front. His response will be included as and when it is received.

According to the analysis, eight states in India had mortality rates exceeding 200 deaths per 100,000 people. Only 50 other countries in the world, of the 191, had worse mortality during the pandemic. These states were Uttarakhand, Manipur, Maharashtra, Chhattisgarh, Haryana, Himachal Pradesh, Punjab and Karnataka (in descending order).

In terms of the absolute number of estimated deaths, Maharashtra topped the chart in India with 0.6 million. Bihar came second with 0.3 million.

This IHME analysis is not the first to report potentially undercounted deaths during the pandemic in India. There have been a plethora of estimates (see here, here, here, here and here, for example), ranging from 2.9 million to 5 million. In terms of India’s official toll, they imply an excess ratio of 5.8x to 10x.

On January 6, 2022, an analysis led by Prabhat Jha, an epidemiologist at the University of Toronto, reported 3.2 million excess deaths in India in 2020 and 2021 – and as many as  2.7 million during the second COVID-19 outbreak alone.

Every time an estimate like this has come along, the Union government has responded with complete denial. It has also issued at least four statements: on June 12, 2021, July 22, 2021; July 27, 2021 and January 14, 2022. On all occasions, it trumpeted how “robust” the CRS was and rejected the possibility of fatality undercounting.

The noted demographer P. Arokiasamy, formerly with the International Institute of Population Science, Mumbai, told The Wire Science in January 2022 that only a nationwide survey could settle the question of India’s ‘missing’ deaths once and for all.

An ongoing Supreme Court case has also been testimony to fatality undercounting during the pandemic. Many state governments have admitted, tacitly or otherwise, that they have sanctioned compensation claims for more victims than their respective registration systems have recorded.

Banaji said the Union government must look into this and other such studies instead of rejecting them. “If that many people had died and one thought it was not due to COVID, then one had to say what other reasons could be,” he told The Wire Science.

“Whatever be the cause, it shows a huge mishandling of the pandemic. The death of 4 million people [represents] a massive mortality impact.”