Maha-Kumbh Mela Vs Tablighi Jamaat: Not Comparable, But Not For The Reasons Rawat Thinks

It shouldn't come as a surprise to anyone that COVID-19 norms are not being followed in Haridwar, or that India's severe spike will continue unabated if events like this continue. 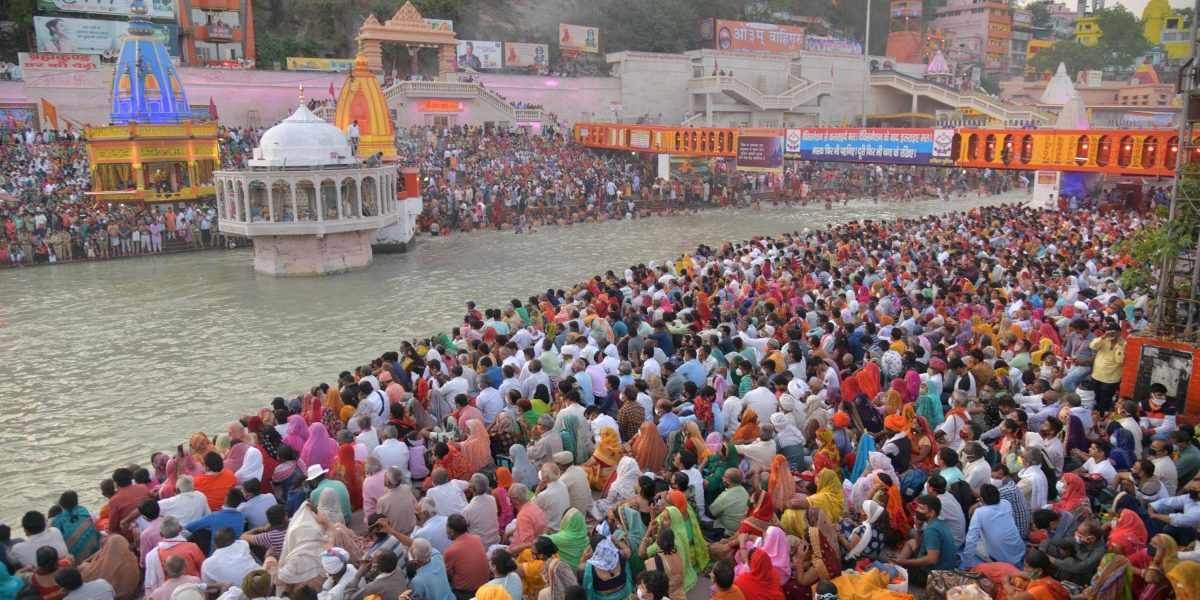 New Delhi: Nearly three million people have gathered by the banks of the Ganga in Haridwar for the Maha Kumbh Mela, one of the largest religious gatherings in the world, even though India is currently witnessing its most severe COVID-19 outbreak since the pandemic began. Photos and videos from the event show that COVID-19 protocols like physical distancing and wearing masks are not being followed at the event.

Even though it was evident from the second week of March that a new surge had begun, the Central and state governments have refused to call off the weeks-long Hindu festival, held once every 12 years.

Uttarakhand chief minister Tirath Singh Rawat has said there should no “rok-tok (impediments)” and the mela should be “open for all”. Rawat himself has been an active participant in the organisation for the festival – and in images taken at the site, he can be seen with his mask around his neck rather than his face. “Nobody will be stopped in the name of Covid-19 as we are sure the faith in God will overcome the fear of the virus,” he had famously said on March 20. 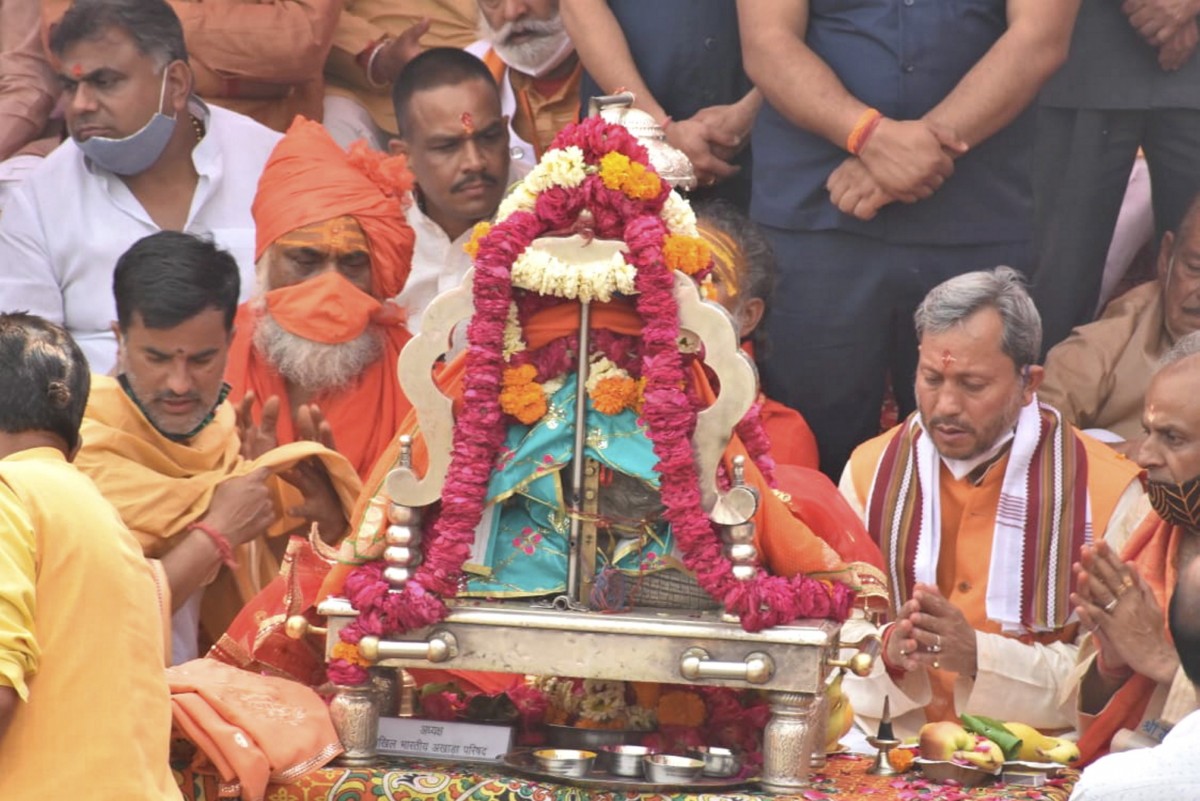 On March 21, several national dailies carried full-page ads of Rawat and Prime Minister Narendra Modi welcoming devotees to the Kumbh and telling them it was “clean” and “safe” to attend. 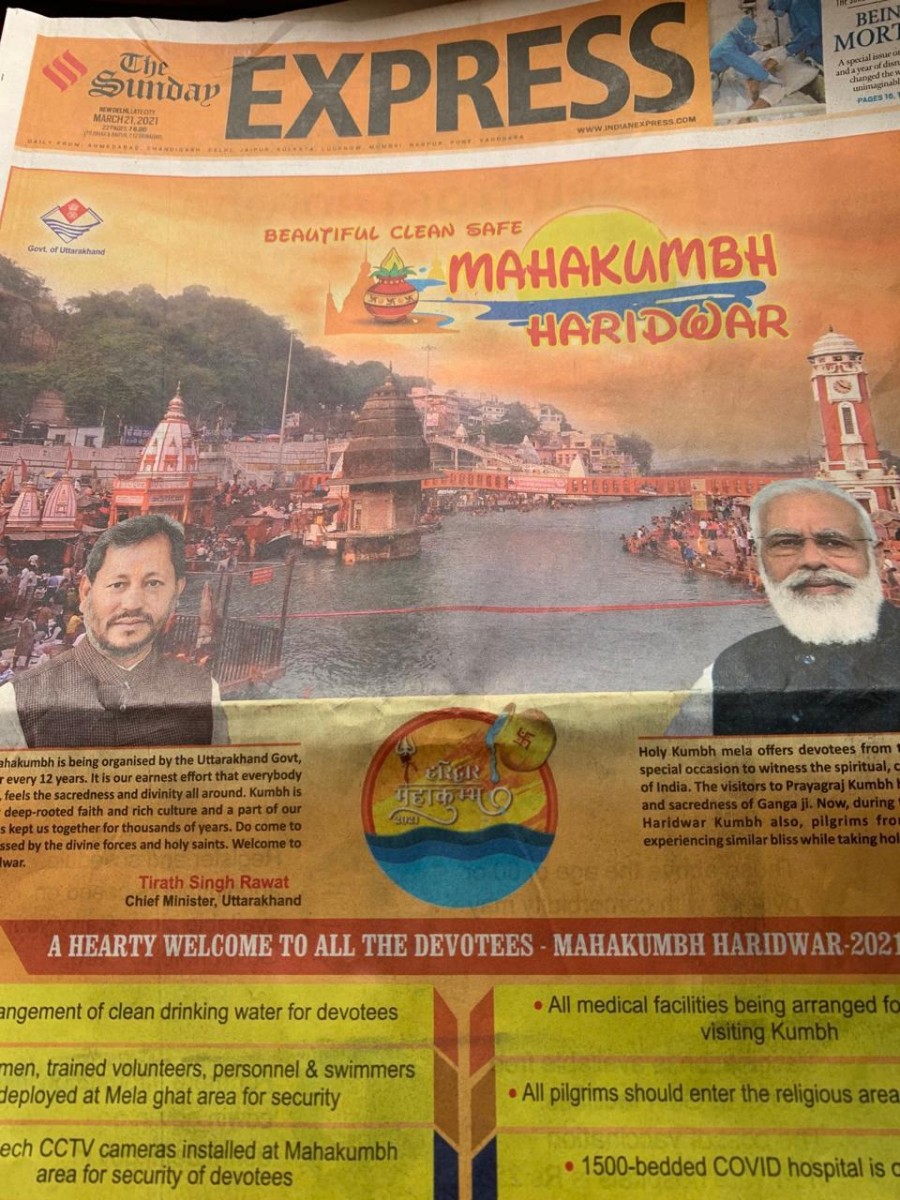 Inspector General Sanjay Gunjyal told news agency ANI that a “stampede-like situation” could occur if the police tried to ensure social distancing at the kumbh. “We are continuously appealing to people to follow COVID appropriate behaviour. But due to the huge crowd, it is practically not possible to issue challans today. It is very difficult to ensure social distancing at ghats,” he said.

Kumbh Mela IG Sanjay Gunjyal says, “General public will be allowed here till 7 am. After that, this area will be reserved for akharas”. pic.twitter.com/9PtcP9WwwG

The Indian Express reported that the Uttarakhand police is using artificial intelligence (AI) technology to pinpoint COVID-19 protocol violations. AI-equipped cameras will apparently zoom in on and capture photographs of faces without masks. Officially said 350 CCTV cameras have been installed in Haridwar, more than 100 of which have the AI sensor. Given the size of the crowds gathering, and breaking norms), though, it is unclear how the police will act post facto.

A surge in COVID-19 cases is already being reported from the city. There are currently 2,056 active cases in Haridwar and 386 people tested positive on Sunday. Last week, on April 4, the number of active cases was 837, NDTV reported. Those attending the mela are now required to carry a negative RT-PCR test when they arrive. But there is no protocol in place to ensure devotees who get infected at Haridwar do not go on to spread the virus when they return to their home districts.

There are three main days of the Kumbh Mela, known as the ‘Shahi Snan (royal bath)’ days – April 12, 14 and 27. The authorities seem unwilling to stop crowding on these days even though the disease is currently spreading at breakneck speed across the country. Instead, the Indian railways has organised 25 special trains on these three days linking Haridwar to various locations for the pilgrims, PTI reported.

Several questions have been raised on why the authorities have done nothing to ensure that the Kumbh Mela – as well as political rallies in the states seeing assembly elections – have not been limited to ensure safety. All the big political parties have flouted COVID-19 rules during the campaign for the elections in Kerala, Puducherry, Tamil Nadu, Assam and West Bengal. The fact that the Bengal election has been spread out over eight phases means the risk of spread is even greater

“Political leaders are themselves responsible” for the resurgence by allowing the packed rallies, Subhash Salunke, a former WHO official told Reuters. “The upward trend is going to be there for another couple of weeks.” Salunke is an advisor to Maharashtra.

In a video conference he held last week with health ministers from 11 states, Union health minister Harsh Vardhan blamed the recent surge on the people of India, saying that they “became very careless” about following COVID-19 protocols.

“There have been elections, religious gatherings, reopening of offices, lots of people travelling, attending social functions, not following rules, little mask-wearing in functions like weddings, even on crowded buses and trains,” he said, according to Reuters. But as the Centre’s point-person for COVID-19, he appears to gave forgotten that neither he nor his government and party have tried to curb public events in light of the virus spreading.

It shouldn’t come as a surprise that COVID-19 norms are not being followed in Haridwar, or that India’s bristling new outbreak will continue unabated if events like this continue. Early this month, a Central government official had warned that the Kumbh Mela could become a “super spreader” event.

“If the government does not decide to end Kumbh before the stipulated time, it may become a COVID-19 ‘super spreader’,” a member in a high-level meeting was quoted by ANI as saying. But such is the government’s unwillingness to be seen as criticising expressions of the Hindu faith that the quote was promptly repudiated and described by the information and broadcasting ministry as ‘fake news’.

Okie!! So what is the correct news? https://t.co/eCnoQmyUQk

The hypersensitivity and lack of concern for public health in the face of the mahakumbh is in stark contrast to the Modi government’s handing of the outbreak of COVID-19 last year detected at the Nizamuddin Markaz of the Tablighi Jamaat in New Delhi.

Unlike the mahakumbh, that event was attended by about 3,500 people and was held before the government had imposed any sort of restrictions on public gatherings or travel from abroad. This was also when several Central leaders had scoffed at those saying the pandemic should be taken seriously.

But overnight, the Tablighi Jamaat was painted as an irresponsible group and blamed for the entire spread of the epidemic in India by both a section of the Big Media and leaders of the Bharatiya Janata Party. This led to backlash of a communal nature against Muslims in various parts of the country; Muslim vegetable vendors were heckled and abused and TV channels came up with abusive and degrading headlines like “corona jihad“.

A year later, India’s COVID-19 situation is much worse than it was when the Tablighi Jamaat event was held (there were only a few hundred active cases then; today there are more than 1.2 million). And yet, a much, much larger religious event is being held with government backing – and neither the TV channels who painted all Muslims as “coronavirus spreaders” nor BJP leaders who saw an alleged evil design playing out in Nizamuddin have anything to say about it.

“The Kumbh Mela shouldn’t be compared to the Markaz,” Uttarakhand chief minister Rawat recently told Hindustan Times, “…because now people know they should sanitise their hands and wear masks.”

Leaving aside the fact that masks are largely absent at the kumbh, the two events aren’t comparable, but for a different reason: the Markaz was about one-thousandth the event the Kumbh Mela is (in terms of attendance), and was held when the dangers of the novel coronavirus were barely known. The Kumbh Mela, on the other hand, is flouting the guidelines the government has put in place, as if they do not exist for the followers of Hinduism.