Across the city, multiple reports have surfaced on negligent treatment, exorbitant billing, and patients being denied treatment by several private hospitals. 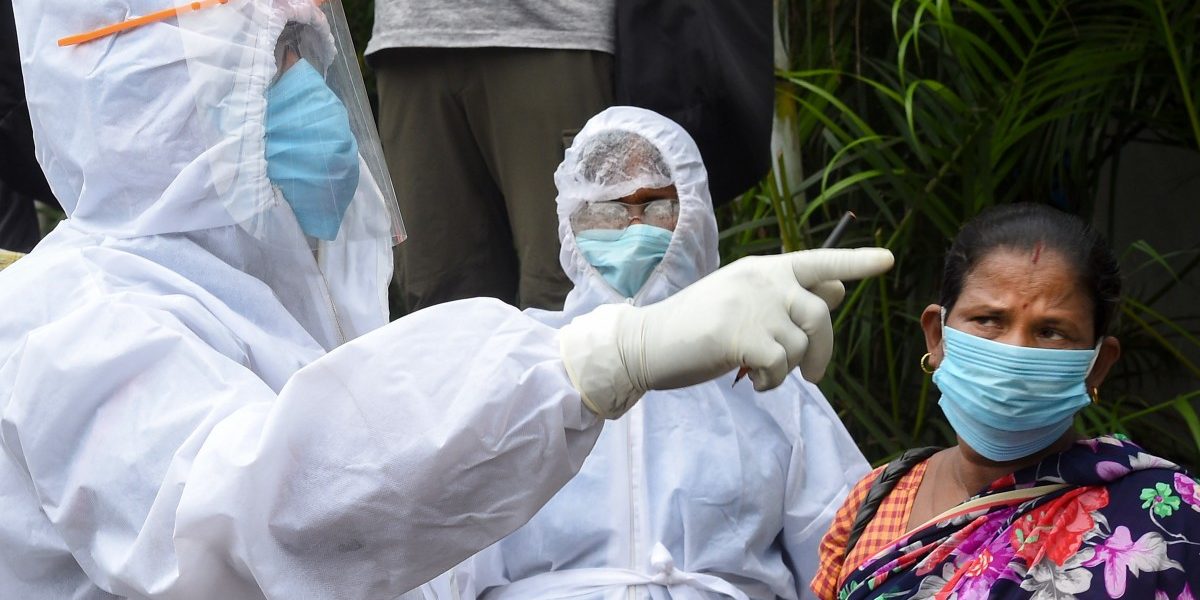 Subhrajit lived at Ichapur in the North 24 Parganas, a district adjoining Kolkata. Early on Friday, he had respiratory distress. His family took him to the ESI hospital at Kamarhati.

Doctors, after checking Subhrajit’s blood pressure and blood sugar level referred him to a hospital with ICCU facility. His family then took him to the nearby Midland Nursing Home in Belghoria.

Also read: We Need to Consider Nationalising Private Hospitals if We Are to Avert a Total Disaster

The nursing home refused admission to Subhrajit, and said that there were no ICCU beds. In the next few minutes, the hospital alleged that the boy was COVID-19 positive without even taking the patient inside the nursing home, the Chatterjees said.

The COVID-19 test report that the nursing home gave the family was handwritten, on a small piece of paper. It reads: “COVID +ve. Refer to higher setup or any government hospital.” 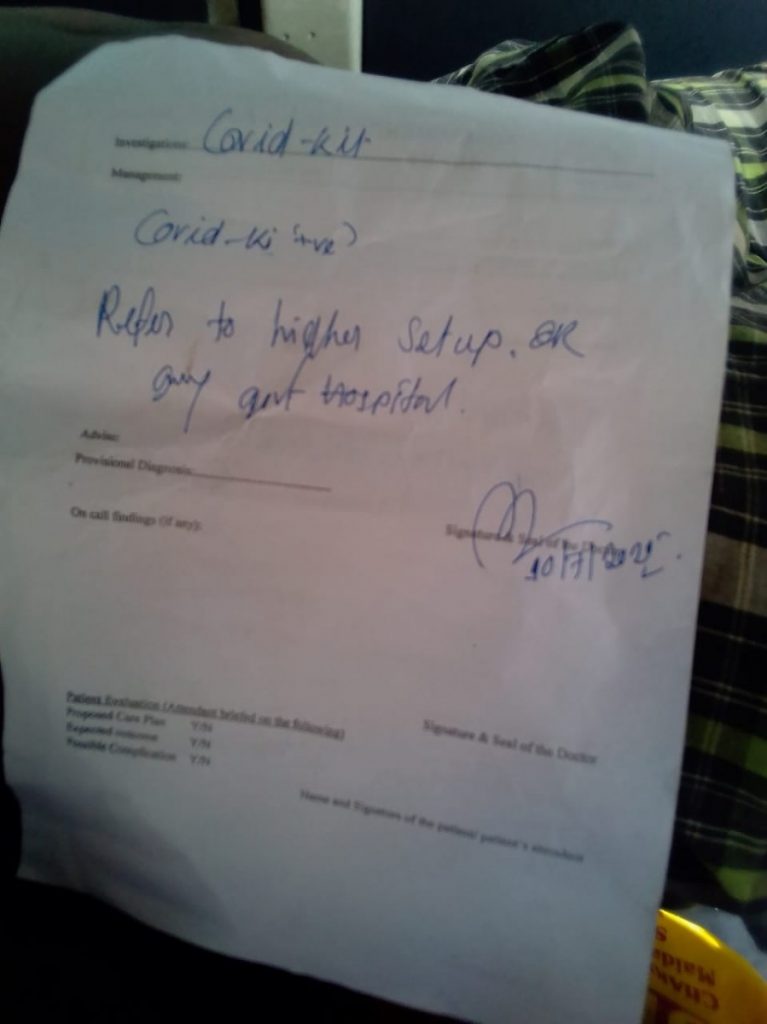 The handwritten COVID-19 test report. Photo: By arrangement with the Chatterjees

The family then took Subhrajit back to Kamarhati, to the Sagar Dutta Medical College this time. This state-owned facility too denied him admission and treatment. The Chatterjees said that the hospital left the teenager on the corridors, unattended, for over four hours.

It was almost evening when his family took Subhrajit to the Kolkata Medical College. At around midnight he was proclaimed dead.

Subhrajit’s family have filed an FIR at the Belghoria police station against the gross medical negligence which led to his death and the fact that his COVID-19 test results were handwritten on a scrap of paper. Biswajit said, “Negligence and apathy killed my son. We will go to any extent to get justice.” Subhrajit Chatterjee. Photo: By arrangement with the Chatterjees

The Chatterjees’ ordeal is not unique. Across the city, multiple reports have surfaced on negligent treatment, exorbitant billing, and COVID-19 and other patients being denied treatment by several private hospitals of Kolkata.

The Wire has learned about a Salt Lake resident, who requested anonymity, and who suffered a cerebral attack on Monday morning. Through the day, the resident was refused admission by no fewer than five hospitals. Later, an intervention by a state minister finally led to his admission in a government-run hospital in south Kolkata.

Also read: The Pandemic Should Serve as a Wake up Call to Revamp Public Healthcare

The scenario is in spite of repeated warnings by the West Bengal government against non-admittance. The government has also threatened strict action against such hospitals. On June 23, the state health department issued an order asking private hospitals and clinics to admit all patients or face strict penal action including suspension of licence. Chief Minister Mamata Banerjee had earlier said, “Hospitals must not refuse patients; else they will face strict action.”

With most private hospitals refusing COVID-19 patients and government hospitals mostly overburdened, helpless patients and their families are running between hospitals.

Health workers collect swab sample for COVID-19 test from a woman who was engaged in door-to-door surveillance to detect coronavirus cases, at a health centre, in Kolkata, Tuesday, July 14, 2020. Photo: PTI

Speaking to The Wire,  a doctor at MR Bangur hospital said, “In the last two weeks, on most days we have been completely full. On good days, we have 5-8% vacant beds.” According to the government’s latest release, MR Bangur has a total of 670 beds, of which 340 are lying vacant as on Tuesday. The doctor said, “These are impossible figures.”

The Wire on Tuesday evening called at least eight private hospitals in the city to enquire about bed availability, all of them barring one said they do not have any vacant beds. The state health department’s portal said all these hospitals had beds available as on Tuesday evening.

One hospital receptionist said over the phone, “Beds are available but doctors need to assess the patient’s history first. Only after clearance from doctors can we admit the patient.”

Debdatta Ray, a 38-year-old WBCS officer, succumbed to COVID-19 early on Monday. Ray had been posted as deputy magistrate and deputy collector in Hooghly’s Chandernagore, and died at Serampore’s COVID-19 hospital.

She was a resident of Dum Dum. On Tuesday, her four-year-old child, husband and mother-in-law tested positive. The family is now facing hurdles in admitting Ray’s mother-in-law to a hospital. A regional news portal reported that “even after several calls to various private hospitals in the city, the family couldn’t get the senior citizen admission.”

Mamata Banerjee announced the price cap on June 26. The West Bengal government said that testing charges will be capped at Rs 2,250, as against the previous Rs 4,500. The tests are done for free at state-run hospitals. The health department further said that in-house consultation fees of doctors are fixed at Rs 1,000 per day while some hospitals were charging Rs 5,000 per day. 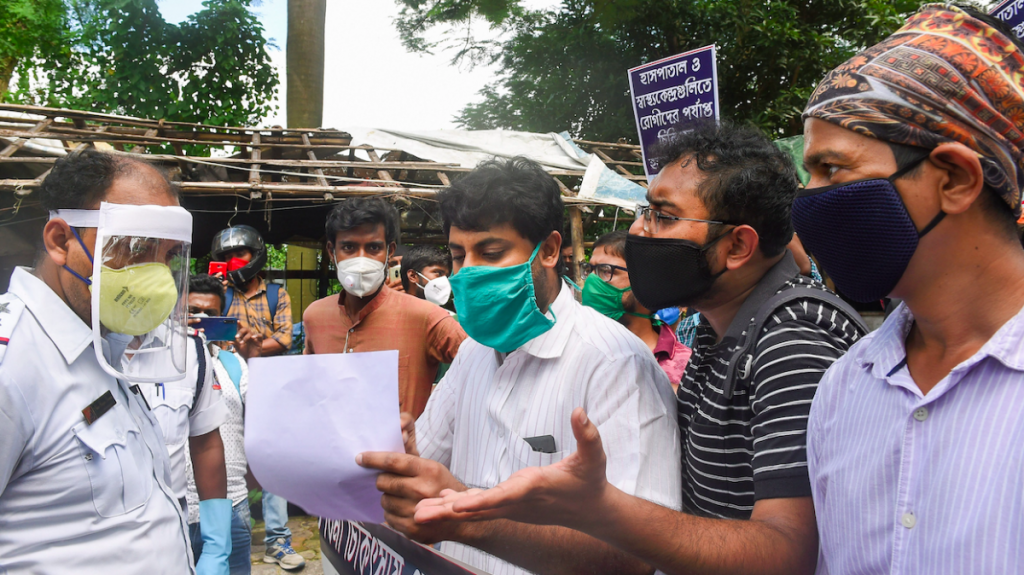 SFI activists interact with a police personnel as they march towards Swasthya Bhawan during a protest demanding resignation of State Health Minister, in Kolkata, Tuesday, July 14, 2020. Photo: PTI

The Telegraph on Sunday reported that many private hospitals in Kolkata are charging patients security deposits in advance before admitting COVID-19 patients and turning them away if they could not pay.

“The hospital employee told me I would have to pay a security deposit of Rs 1 lakh in cash for admission. When I said that was not possible, the person told me no beds were available,” the newspaper quoted a patient as having said.

Speaking to The Wire, state BJP chief and MP Dilip Ghosh said, “The government is repeatedly saying that there are enough beds in COVID-19 hospitals. If there are adequate beds, why are patients dying without treatment?”

Taking a dig at government’s claim of action against private hospitals, Ghosh questions, “Chief minister said that licences will be cancelled of those hospitals which are turning away patients. I want to know how many licences have been cancelled so far.”

Several calls to the state health department and health secretary N.S. Nigam went unanswered. When we contacted a senior Trinamool MP, he said, ” I don’t want to comment on this. It’s better to talk to the health department, as the issue is crucial.”