The students, who were evacuated from Iran last month, have been kept with pilgrims from Qom, 14 of whom have so far tested positive for the novel coronavirus. 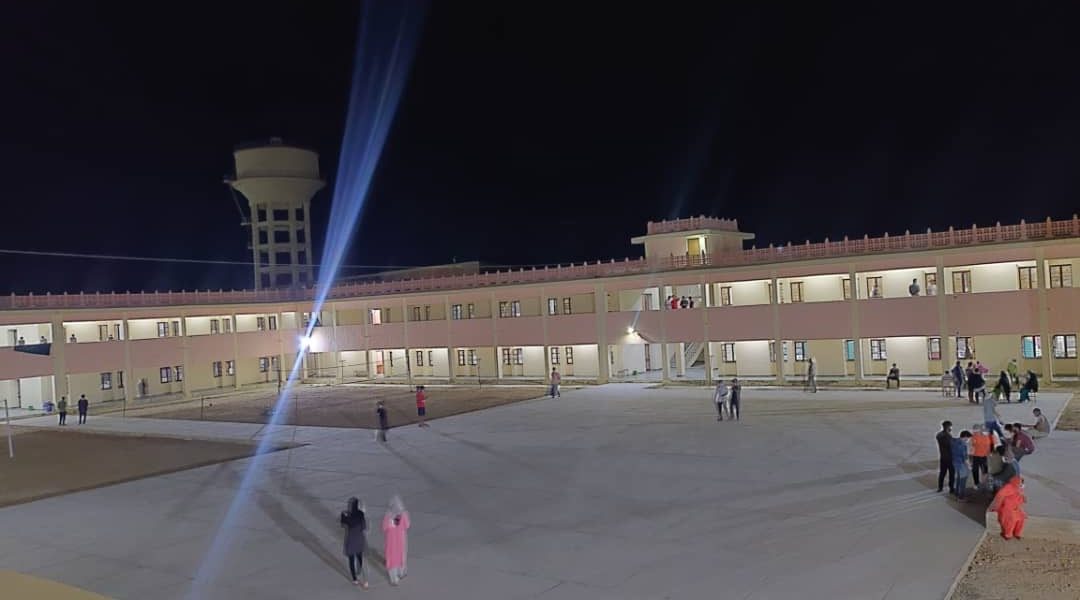 Inmates in the quarantine facility provided by the army for pilgrims and students whose return to India was facilitated by Ministry of External Affairs last month. Photo: Special arrangement

Srinagar: Around 150 Kashmiri students quarantined at army facilities in Jaisalmer, Rajasthan have pleaded that they should be relocated to Kashmir as they fear exposure to the coronavirus after the authorities allegedly allowed to mix them with a high risk pilgrim group from Qom, Iran – 12 of whom tested positive for infection last week.

On Monday, after two more pilgrims under quarantine tested positive, the students told The Wire they will go on hunger strike if the authorities do not assent to their relocation.

After the test results last week, the authorities decided to shift around 100 students to a separate facility some 13 kilometres away. “We were boarded into army buses and taken to a separate facility,” said a student who was relocated. “They have placed barbed wire and introduced partitions as well so that physical distancing is observed. But this happened only after we made a lot of fuss about it.”

However, around 50 students are still being quarantined with the pilgrims at the earlier place.

The students from Shiraz University and Tehran University of Medical Sciences were flown out by the Ministry of External Affairs last month in a special flight from Tehran to Delhi but they alleged that their evacuation was hasty and involved lot of negligence. Right from the start of the coronavirus outbreak in Iran – which began from Qom – to the time of their lodging at an army facility in Jaisalmer and after, the students say they have had a harrowing time.

“We were already under quarantine conditions at our dorms in Tehran but our parents were literally weeping on the phone because they were extremely concerned about us,” said a Kashmiri student at TUMS who hails from Shopian district. “Since out semesters had ended, we had already booked flights for India.”

But as Iran closed its outbound flights in February to curb the spread of pandemic, the students were left stranded. They decided to get in touch with Indian embassy in Tehran and requested evacuation. “On March 9, a medical team from the Indian embassy arrived to take our swabs. Among the students, two girls, one from Lucknow and another from Kashmir, tested positive, and they were told to stay in Tehran,” the student said.

Then on March 14, the students received a communication from the Indian embassy asking them to arrive at Tehran airport. “We boarded a Mahan Air plane in the middle of night at 3:30 am and reached Delhi airport early morning, where we were asked to stay inside the plane for almost an hour,” another student who hails from the Tral region of Pulwama told The Wire. “We were pretty sure plenty of us must have caught the infection. They put us in the same plane in which the pilgrims were also made to sit. A lot of interaction took place in the place. In addition to that, a lot of people brushed against each other amid the tense situation.”

According to the students, the pilgrims were tested five days before the day of departure. “There are high chances they must have caught the infection within those five days,” another student added.

In Delhi, the evacuees were made to board another Air India flight bound for Rajasthan, from where they were driven to an Army Wellness Centre in Jaisalmer.

To their shock, the students discovered that their quarantine facility did not to adhere to the necessary protocols of social distancing. “We shared common washrooms. We all were crammed into one building that had many blocks,” said another student from Srinagar. “It was not a quarantine at all. It was like a jail where we were given a glass and a plate. We had to queue up in lines to get food; we mixed freely in the corridors, along the staircases, in halls and at the ground outside. The mixing was free. That’s because even the authorities felt that since all of us had turned negative in Iran, there was no chance of infections. But that was a mistake.”

Around 250 evacuees, pilgrims and students included were tested again on March 28 and almost 12 turned positive. The infected cases were all pilgrims. “Seven of them were from Maharashtra and Hyderabad and five of them were Kashmiris. They were all shifted to hospital. But that news scared the wits out of us. All these days we had been interacting with them freely. We shared the same dining hall, literally went to the same bathroom and even played with each other at the ground outside. So far, none of the students have shown symptoms of COVID-19 but that doesn’t rule out the chances of us having contracted the infection from the pilgrims,” a student from Ganderbal district said.

The students are growing increasingly anxious over their stay, which has now been extended. Ideally, their two-week quarantine should have ended on March 28 but the presence of 12 positive cases means their quarantine has been extended for two more weeks. “We were already under quarantine for 21 days in Tehran, now we are supposed to spend almost a month here,” one of the students said.  “On the top of that, the authorities here are telling us that our second quarantine period will be counted from April 3. How long are we going to stay here? We request the government of J&K to take us back to our state. We are willing to stay in quarantine in Kashmir but not here.” 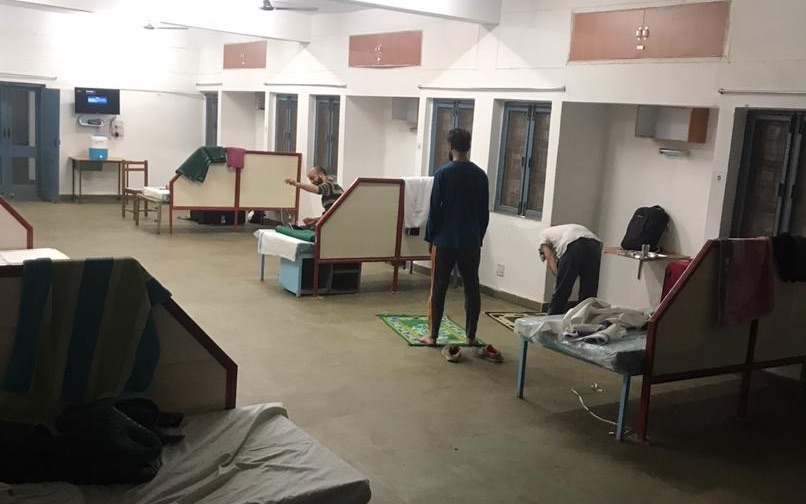 Students in the separate quarantine facility provided by the army near Jaisalmer for them so that they are not close to the pilgrims whose risk of exposure to the coronavirus is believed to be greater. Photo: Special arrangement

The students said that after the 12 infections, the facilities have also improved. “Protocols are being followed,” said another student.

However, all the students – the 100 who were shifted to a separate location and the 50 who remain – are demanding that since they have twice tested negative, they should be relocated to J&K where they are ready to face one more quarantine period. “It’s better to be at home. Temperatures have started to soar here and we feel a lot of discomfort,” a student said.

From Mumbai, a similar demand

Meanwhile, as many as 44 pilgrims from J&K quarantine at a navy facility in Ghatkopar, Mumbai, are seeking relocation to the Union Territory. The pilgrims, who have tested negative twice, are requesting the government of J&K to facilitate their return to the former state.

“We arrived in India on March 13,” said one of the Kashmiri pilgrims. “We already served one 14 day quarantine period and none of us tested positive.” The group comprises three pilgrims from Kargil, five from Ramban, Jammu and the remaining 36 from Kashmir. The pilgrims have not complained about the service at the facility but emphasise that they yearn to return to their region. “The facilities provided by Indian navy are excellent. We are not complaining about anything here,” one pilgrim said.

The pilgrims also claimed that the J&K government denied permission for their entry in the UT even as the Indian Navy had also requisitioned a plane for their transportation. “The rising temperature is making us uncomfortable,” said one of the pilgrims to whom The Wire spoke on phone. “We have elderly ladies with us who cannot bear high temperatures. There is one 80 year old lady. Recently two women fainted due to the heat.”

The Wire rang Rohit Kansal, principal secretary, planning and information J&K and also Pandurang Kondbarao Pole, divisional commissioner of the Kashmir region for their comments. The story will be updated as and when these officials respond.