Award-winning urologist Omar Salim Akhtar repeatedly said that he was only trying to shine a light on the looming 'humanitarian crisis'. 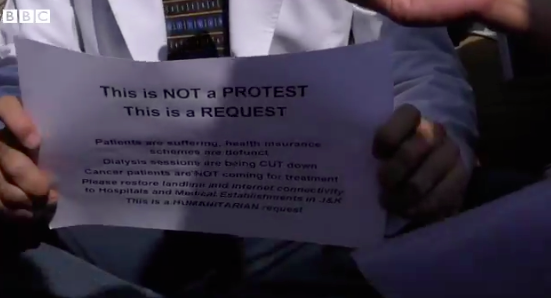 The placard held by Akhtar that said he was making a “request and not a protest”.

Update: On the night of August 28, Dr Salim Akhtar’s brother tweeted that he had finally been released.

New Delhi: The last time Omar Salim Akhtar’s name appeared in the news was when he received the (student) gold medal for urology at New Delhi’s Vigyan Bhawan at a function attended by the vice president of India.

A year later, he has become the face of the crisis of healthcare in Kashmir after he was whisked away by the police just minutes after speaking to the media for saying that life-saving medicines were running out.

The Telegraph had reported that a doctor identified as Omar Salim Akhtar, a urologist at Government Medical College in Srinagar, had held a placard saying: “This is not a protest. This is a request.”

Speaking to BBC Urdu, Akhtar repeatedly said that he was only trying to shine a light on the possibility of a looming “humanitarian crisis”.

He added that poor patients were being unable to access the healthcare benefits under the Ayushman Bharat scheme for the last three weeks due to the restrictions on internet and landlines.

The central government had put the state of Jammu and Kashmir under several communication restrictions, as well as detained politicians of all hues, ahead of the change in special constitutional status and the bifurcation of the province into two union territories.

Akhtar stated that many patients, including his own, were using their own money to buy drugs for dialysis and chemotherapy.

When a journalist pointed out that the authorities had claimed that the health situation in Kashmir is normal, Akhtar said that the Ayushman Bharat scheme was based on smart cards which are swiped after which the details are checked.

“I don’t have data right now that patient mortality has increased. But, it is also true that if a patient who needs dialysis three times a week, and can just afford one, then he can surely die,” said Akhtar.

According to the Telegraph, he had barely spoken for ten minutes when police took him away from the spot. His location has not been disclosed.

His brother Othman Salim, also a medical doctor but living in US, expressed shock on Twitter at his brother being taken away by the police.

Thats my brother!! He wasn’t even protesting. He was just talking to @BBCUrdu about patients not being able to get dialysis…why was he arrested???

Another Twitter user, who claimed to know Akhtar, said that it would have been easier for him to keep quiet.

I have known Omar since I was a kid and he is someone I have always looked up to. Beyond shaken. A doctor speaking up for his patients is arrested. It was easier for him to say nothing but he could not do that. That is why I have always admired him.#StandWithKashmir @UNGeneva https://t.co/ES7E3rBXyc

Just a year ago, Greater Kashmir had carried a report about two doctors from Kashmir getting gold medals.

The home ministry has been refuting reports of several media outlets that there was a healthcare crisis in Kashmir valley.

On August 22, The Wire had reported about cases of relatives of patients having to travel long distances to buy medicines, since many shots had run short of supplies.

A group of doctors had also urged Indian professional bodies to coordinate with the government to ensure that there were no gaps in service provision.

Earlier, the British medical journal The Lancet published an editorial on August 5 expressing concern about the health and safety situation in Kashmir. The Indian Medical Association had retorted that The Lancet had no ‘locus standi’ to comment on the issue.

Update: On the night of August 28, Dr Salim Akhtar’s brother tweeted that he had finally been released.