"There are no doctors who can treat the disease of love for a dead son,” a bereaved mother said.

Shopian, Kashmir: Ruqaya is only 45, but she looks much older. She is numb. Nothing seems to rouse her from her grief-stricken torpor. She meanders unnoticed through the streets of her locality that lead to the local graveyard, often attempting to dig up her son’s grave. His memories torment her, she says, and silence hangs in a pall over the household.

“She left home a half dozen times without informing anyone and twice we found her at the grave of her son, digging it with her fingers,” her neighbour Nisar Ahmad said.

Adil Bhat had stopped his education with class 12 to help his family, as his fathers’ spine-disorder worsened. His family had allowed him to join the Jammu and Kashmir police service two years ago. He had become a special police officer, and was killed on August 29, 2018, in a militant attack.

Like thousands of families in the Kashmir Valley marred by decades of bloody violence, their efforts at rebuilding their lives have been marred by failure, disappointment and a certain listlessness thanks to trauma and post-traumatic stress disorders (PTSD). All four members of the Bhat family regularly consume medicines to feel better. 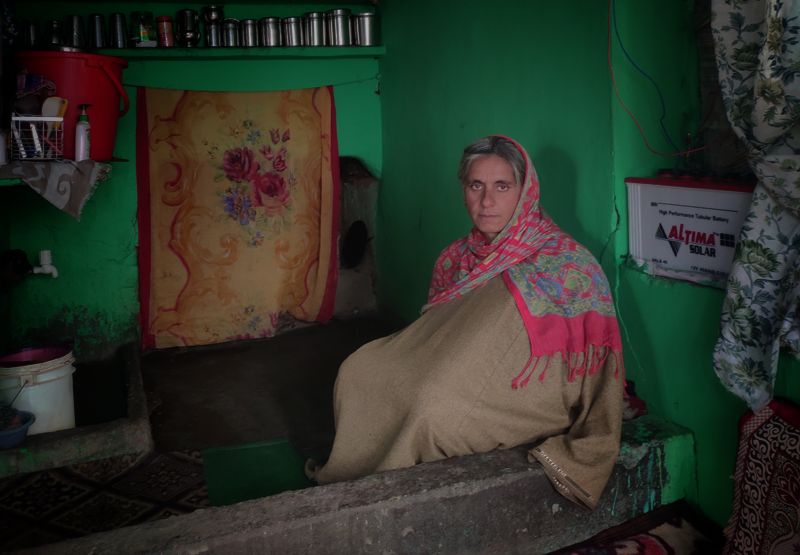 After the state’s political climate became more uncertain after 2008, civil unrest has been gnawing at the social fabric and families have been rendered helpless without specialised mental healthcare that is also affordable.

Dr Mushtaq Margoob, a noted psychiatrist in the valley, wrote in a preface to the Kashmir Mental Health Survey 2015 that prevalence of mental disorders and distress have reached epidemic levels in the population of Kashmir, with 37% of adult males and 50% of females suffering from probable depression; 21% of males and 36% of females from a probable anxiety-related disorder and 18% of men and 22% of women suffering from probable PTSD. 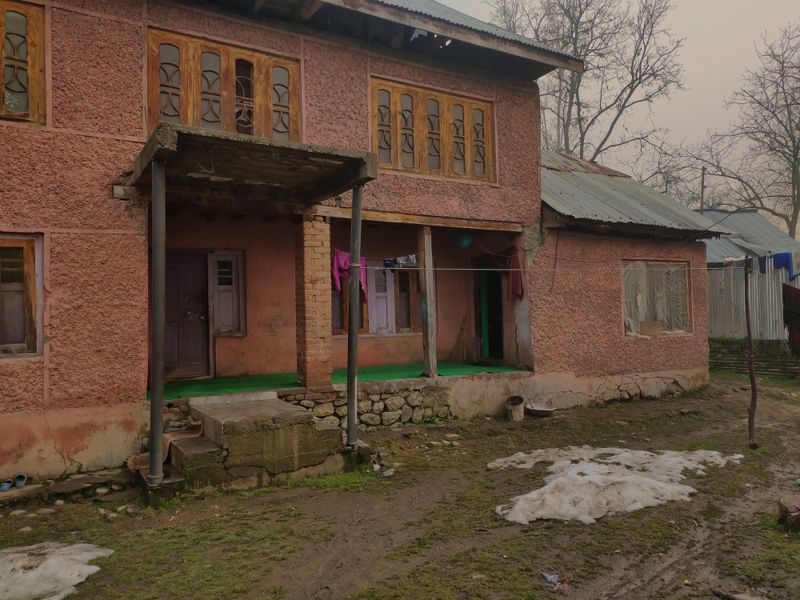 On the bright winter afternoon of December 27, Ruqaya broke down. “How will we forget the killing…  He took our everything with him, we have been half inside our graves,” she said.

After a long silence, she says she has trouble sleeping. “Ask him” – she gestures at Owais, her teenaged son – “even last night he gave me a massage.” Mother and son have been consoling each other this way for a year now. The diazepam tablets haven’t helped much. Owais failed his class 10 exams and hasn’t been able to concentrate. He frequently complains of pain in his head.

“He smashed his head with a stone when the body of his brother was brought home for the final rites. He fell unconscious and had to be hospitalised,” his father Manzoor Ahmad had said earlier.

Ahmad is no longer home, however. He left a week ago and hasn’t been heard from since.

Ahmad had fallen from a tree a short while ago and hasn’t been able to find work since. Now, Adi’s fragmented family believes their fallen son’s dream to their improve prospects has been buried with him. A mother-son duo lies buried in another grave two kilometres away, in the village of Nadpora. An army firing on January 27, 2018, at Ganowpora killed three civilians. One of them was Rayees Ahmad, who died shortly before he was to meet a woman his mother, Fatima, had hoped he would marry.

Three months later, Fatima also died on the same road that Rayees had walked on his last day, wandering in search of her son’s grave. ”She couldn’t have a normal moment after hearing about his death,” her daughter-in-law, whose family lives separately, said.

“She would ask us to keep dinner out for him, force us to keep the doors open for him at night.” The family has made many trips to many clinics but they haven’t helped. Fatima would often roam around the village looking for Rayees’s grave, and the villagers would send her back every time. 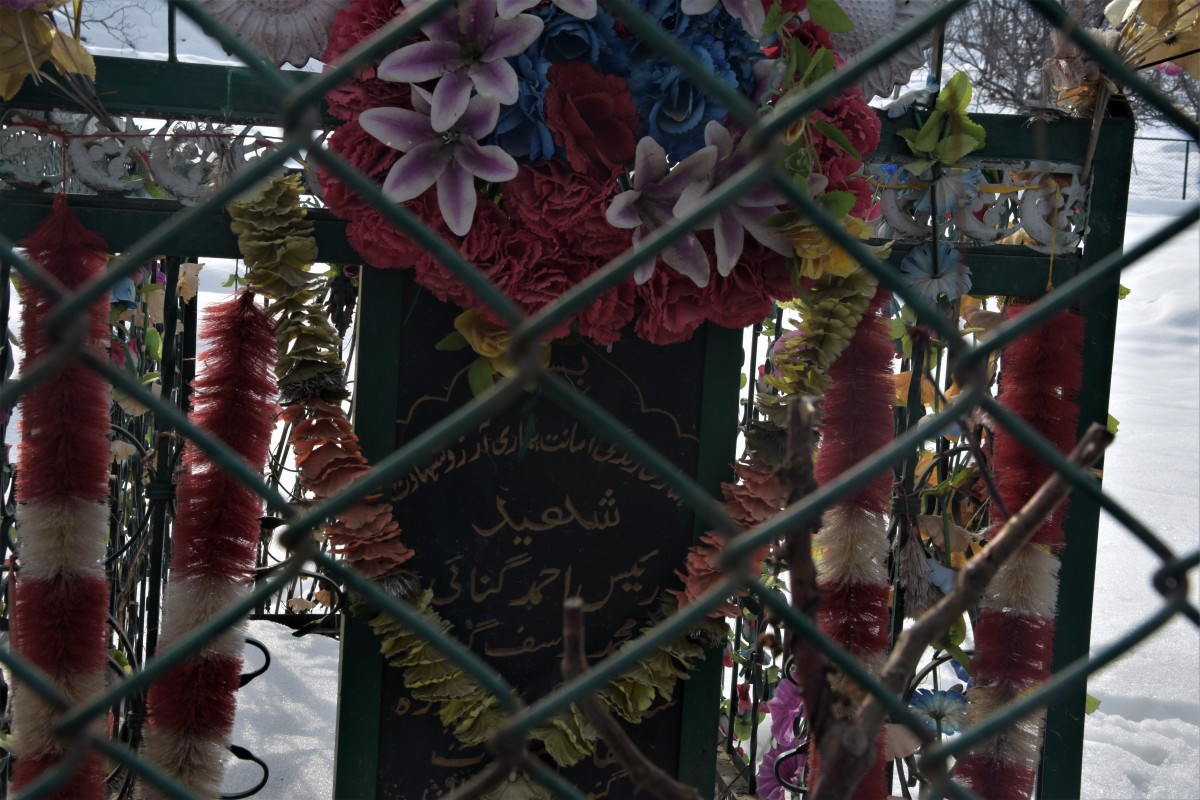 The epitaph on Rayees’s grave with his name. Photo: Ishtiaq Wani

Dr Yuman Kawoos is a psychiatrist at a local hospital in central Kashmir. She said an epidemic of mental health issues has swept through the valley, that most cases are conflict-related and that the social stigma associated with such issues has come in the way of mental health professionals doing their work.

Even talking about such issues is taboo, so trauma survivors – most of them women like Fatima – hesitate to consult specialists. “People come to me after four or five years for treatment,” and in this time the problem has become worse. “They have to bear the consequences,” Kawoos said. In fact, before they meet doctors, survivors often approach “faith healers”. This diversion only postpones actual treatment from the time of the traumatic incident.

“People go to these ‘faith healers’ often out of ignorance and to avoid social stigma. Even educated people – be it in rural or urban areas – visit them,” said Farah Qayoom, a sociologist at the University of Kashmir who has worked on women’s issues relating to armed conflict in the valley.

She is concerned with the growing incidence of mental health issues like PTSD in the valley, which she said people should talk about more. According to her – and the 2015 Kashmir Mental Health Survey agrees – conflict is often the primary trigger. According to the survey, an adult living in the Kashmir Valley witnesses or experiences more than seven traumatic incidents during their lifetime (on average), including natural disasters.

“A spike in mental disorders is the direct [consequence] of the conflict that people are experiencing,” Qayoom said, together with a reminder that civilians aren’t the only ones affected: policemen, militants, soldiers and CRPF personnel suffer as well thanks to what she called the “conflict industry”.

After Fatima died, her family threw away her medical reports. Her son Rayees is still known as the awlaad – ‘obedient’ –  who was “martyred”. Adil’s family hasn’t been able to make peace with his death, and his mother’s unresolved grief still weighs her down.

“There are no doctors who can treat the disease of love for a dead son,” she said.

Note: An earlier version of this article said that Adil Bhat had been killed in a suspected militant attack, standard terminology for when no group claims responsibility. The reporter has since clarified that Jaish-e-Mohammed has in fact claimed responsibility, so the word ‘suspected’ has been deleted.