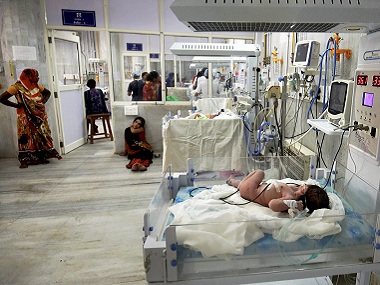 New Delhi/Mumbai: Since December 1, 2019, over 500 infant deaths were reported from just six government hospitals in Rajasthan and Gujarat.

In Rajasthan, over 101 infants died in Kota’s JK Lon Hospital, 102 died in Jodhpur’s Umaid and MDM hospitals, and 124 in Bikaner’s Sardar Patel Medical College in the month of December. In Gujarat, 111 infants died at Pandit Deendayal Upadhyay Hospital in Rajkot and 85 died at the Ahmedabad civil hospital.

“This [infant deaths] is not a Kota problem,” said Sunil Mehra, a paediatrician and executive director of the non-profit MAMTA that works on maternal and child health. “There are structural issues like lack of appropriate facility at primary centres, delays in referring patients [to specialists] and lack of transportation which lead to high infant deaths.”

IndiaSpend analysed health data from 13 states to understand why so many infants and children die across the country. States analysed include some of the poorest that form what the government calls the empowered action group (EAG) – Bihar, Jharkhand, Uttar Pradesh, Uttarakhand, Rajasthan, Odisha, Chhattisgarh and Assam; as well as Maharashtra and Gujarat that have been in the news for infant deaths in hospitals; and Goa, Kerala, and Tamil Nadu, which have among the lowest infant mortality rates in the country.

Infant deaths are more a symptom of deeper social problems such as malnutrition, sanitation, and immunisation, rather than just medical aspects, said Dipa Sinha, assistant professor at B R Ambedkar University in Delhi. Since most of the deaths are from infections such as pneumonia, which can be treated at the primary level, the preventive and primary healthcare system in the country is broken, she said.

Despite fewer deaths, the highest rate in the world

Also read: 8 Ways in Which India’s Public Healthcare Can Change for the Better

Many of the deaths occur before children turn one. As many as 33 of 1,000 children died within one year of birth in 2017, a reduction by 42% in 11 years, according to data from the government’s Sample Registration System and as IndiaSpend reported in June 2019.

However, there are huge variations across states, both in IMR and the causes of infant deaths. In 2017, Nagaland had the lowest IMR of 7, followed by Goa (9) and Kerala (10), while Madhya Pradesh (47) had the highest rate.

Studies have shown that states with high infant mortality of 30-40 (per 1,000 births) have preventable causes of deaths such as diarrhoea and sepsis, said Chandrakant Lahariya, a physician and public health specialist. “The states with lower IMR like Kerala have other causes of deaths like congenital or genetic abnormalities,” he said.

Since almost half of all under-five deaths are among newborns, many can be prevented by reaching higher coverage of good quality antenatal care, skilled care at birth, postnatal care for the mother and the baby, and care of small and sick newborns said this 2019 report from the United Nations Children’s Fund (UNICEF).

The rate of Institutional deliveries doubled since 2005 from 38.7% to 78.9% in 2015-16, which has helped reduce a large number of infant deaths, but the newborn care infrastructure has not kept pace with the increase in institutional deliveries, said Somashekhar Nimbalkar, a professor of paediatrics at Pramukhswami Medical College in Anand, Gujarat.

Most of the deaths (57.9%) of children under five are among neonates–babies younger than 28 days–showed a 2019 study published in The Lancet. These deaths can be prevented with cost-effective interventions such as kangaroo care–where babies are kept in skin-to-skin contact with the mother, thermal control, breastfeeding support and basic care against infections and breathing difficulties, the report said.

The launch of facility-based newborn care under the National Rural Health Mission has created Newborn Care Corners at every point of childbirth, newborn stabilisation units at First Referral Units and special newborn care units at district hospitals across the country.

However, these care corners had more patients than they could handle, a shortage of physicians and hospital beds, and a lack of mechanisms for timely repair of equipment, a 2016 study published in the Journal of Perinatology said.

While 83% of community health centres had a newborn care corner, 59% did not have a stabilisation unit for newborns, showed the 2018 Rural Health Statistics.

Community health centres in all 13 states except Kerala and Maharashtra had a shortage of specialists ranging from 75% of positions to 95%, data show.

This means that most parents are forced to seek care at tertiary care units such as district hospitals, which leads to overcrowding at intensive care units for neonates and infants. This increases the risk of infections, said Mehra of MAMTA.

States with the highest IMR–Madhya Pradesh, Assam, Uttar Pradesh, Rajasthan–also have fewer women with more than 10 years of education and a higher proportion of child marriages.

In addition, fewer women in these states get the required four antenatal care (ANC) visits that can flag issues such as anaemia, malnourishment, hypertension and gestational diabetes in mothers, which also impact the foetus. 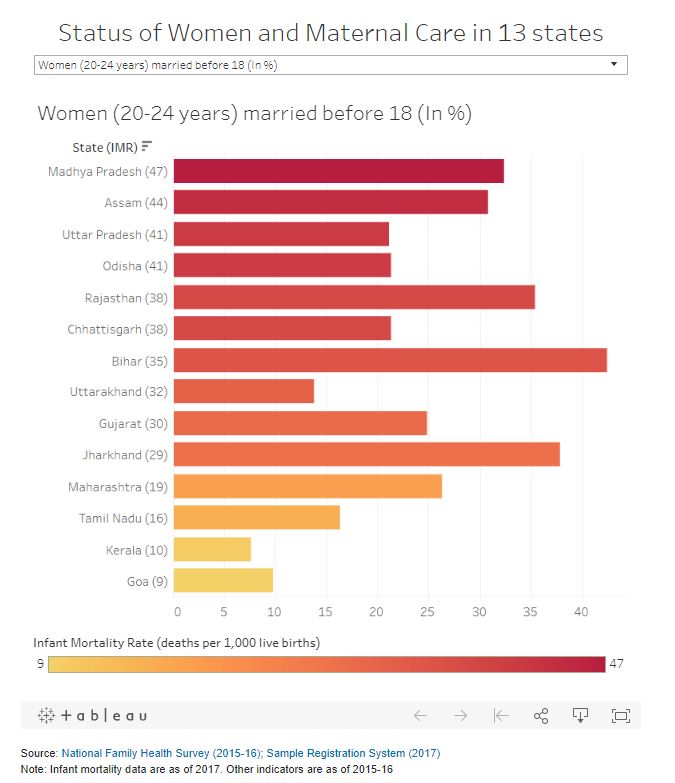 One in five children (21.4%) was born with low birth weight (under 2.5 kg), and only half of all children were exclusively breastfed (53.3%) for six months, which improves child health and cognition, according to a report by the Indian Council of Medical Research, published in The Lancet in September 2019.

“The biggest problem in rural and tribal areas is low birth weight of children and mother’s poor nutrition,” said Rupal Dalal, a paediatrician and adjunct faculty at the Centre for Technology Alternatives for Rural Areas, Indian Institute of Technology-Bombay. “Mothers don’t have proper guidance on breast-feeding at the time of birth and that increases the risk of low birthweight babies getting infections.”

There are other factors that impact child health. Newborns have better chances of survival if breastfed within the first hour of birth, as this UNICEF report says: “When breastfeeding is delayed after birth, the consequences can be life-threatening and the longer newborns are left waiting, the greater the risk.”

Only one in four babies born in Uttar Pradesh and 28.4% of babies in Rajasthan were breastfed within an hour of birth, NFHS data from 2015-16 show. Both these states have high IMR. 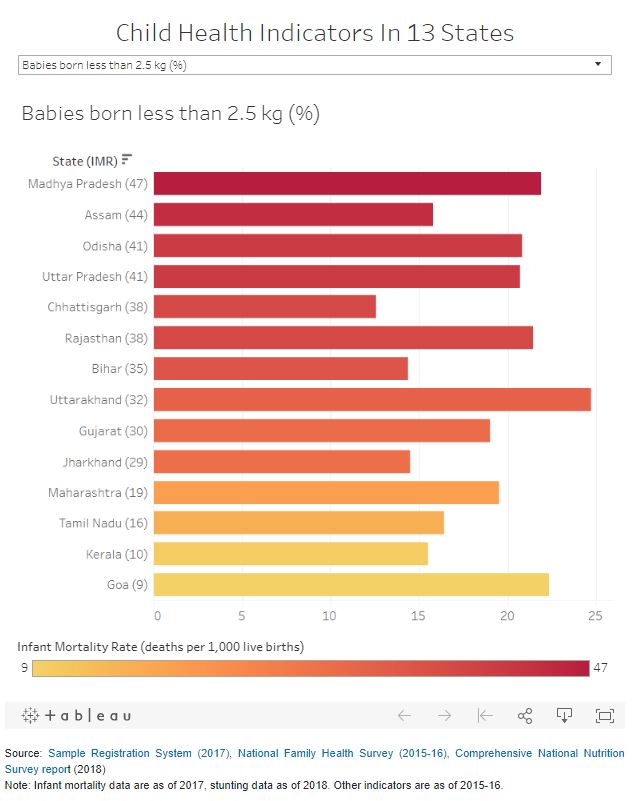 Lack of vaccination and malnutrition

More children under two in Tamil Nadu (69.7%) and Goa (88.4%) had received all the basic vaccinations than those in other states that we analysed. The lowest percentage of fully immunised children was in Assam (47.1%), Gujarat (50.4%) and Uttar Pradesh (51.1%). In Rajasthan, 45.2% of the children were not immunised.

Malnutrition was the predominant risk factor for death among children under five years of age in every Indian state in 2017, accounting for 68.2% of total deaths, IndiaSpend reported in September 2019.

At 42%, Bihar accounted for the highest number of stunted children–short for their age–between the ages of zero and four, the Comprehensive National Nutrition Survey report released in October 2019 showed. On average, two in five children in EAG states were stunted. In Kerala (20.5%), Tamil Nadu (19.7%) and Goa (19.6%), one in five children were stunted.

Also read: Ground Report: Infant Deaths at Kota’s J.K. Lon Hospital Were a Matter of When, Not If

Children who are undernourished, do not have access to safe drinking water and sanitation, and are exposed to high indoor air pollution are at risk of contracting pneumonia. Pneumonia can be easily treated with low-cost antibiotics, if diagnosed correctly. Yet, India had the second highest number of pneumonia deaths among children under five years–127,000 deaths–in 2018.

Diarrhoea killed 90,000 children under five in 2017. Yet, only 50.6% of children with diarrhoea received oral rehydration solution (ORS), a simple method of managing diarrhoea, and 20.3% received zinc supplementation, which helps fight diarrhoea. “We don’t need branded ORS packets to be given to children with diarrhoea but clean water with salt and sugar. How many children are getting this?” asked Sinha, the B R Ambedkar college professor.

The rotavirus vaccine, which protects against diarrhoea, has been rolled out countrywide, Livemint reported in August 2019. The current reported coverage is 73% in 41% target population, according to a surveillance report by the World Health Organization (WHO).

However, in the public sector, only six states provide the pneumococcal conjugate vaccine that protects against pneumonia, IndiaSpend reported in November 2018. The current coverage of the vaccine is 44% in 13% of the target population, according to the WHO.

The article was originally published on IndiaSpend. You can read it here.