Indian officials say there was no responsibility to inform the WHO about the three Zika cases, while the WHO says this is not true. 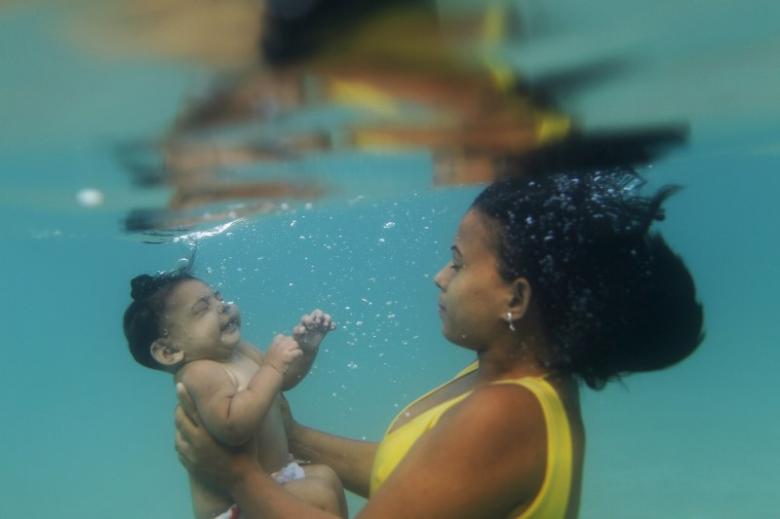 Rosana Vieira Alves and her 5-month-old daughter Luana Vieira, who was born with microcephaly, pose for picture in the sea of Porto de Galinhas, a beach located in Ipojuca, in the state of Pernambuco, Brazil, March 2, 2016. Credit: Reuters/Ueslei Marcelino/Files

This is the second article in The Wire’s series on India’s Zika cover up. Read part one here.

New Delhi: On November 18, 2016, the World Health Organisation (WHO) announced that Zika is no longer a public health emergency of international concern. This is not just a phrase used to describe the status of Zika, it is a technical term with legal weight. In WHO and legal circles, the nomenclature goes by the acronym, PHEIC.

Nine days earlier, on November 9, 2016, a 34-year-old woman delivered a “clinically well baby” in BJ Medical College (BJMC) in  Ahmedabad, Gujarat. This was a relief for doctors and health officials. During her time in the hospital, the mother had developed a low-grade fever. She had not travelled for the previous three months. A sample from the woman was tested at BJMC for dengue, after which she was found positive for the Zika virus. Her sample was sent to the National Institute of Virology (NIV) in Pune. By January 4, 2017, NIV confirmed what BJMC had already said in 2016 – the 34-year-old woman tested positive for the Zika virus.

However, her baby was safe and exhibited none of the markers of microcephaly. Babies born with microcephaly have small heads that may stop growing after birth. Having the Zika virus infection during pregnancy is one of the causes of this congenital brain abnormality. The children may also develop epilepsy, cerebral palsy and learning disabilities. There is no treatment for microcephaly.

The timeline of events worked in favour of Indian government officials – WHO ceased to call Zika a PHEIC in November 2016, the same month India detected its first case. Because the nomenclature was dropped, according to Indian officials, India just about missed the cut off for having to report any Zika case to the WHO. Herein lies the loophole that has made it possible for the Indian government to conduct a massive surveillance and containment programme for the disease – 34,233 human samples and 12,647 mosquito samples – with no disclosure.

The International Health Regulations (IHR) are a binding WHO agreement which 194 countries, including India, have a legal obligation to comply with. According to the IHR, state parties have 24 hours to notify the WHO of disease events, especially those that are epidemic prone. Countries can decide whether to notify the WHO based on four yes-no questions: if the health impact of the disease is serious; if the event is unusual; if there’s a risk of international spread; and if there is a risk to travel and trade.

Dr P. Ravindran, the director of emergencies in the Ministry of Health and Family Welfare, explains the thinking behind the government’s approach: “There’s a finer point in the IHR. It says the WHO must be notified if there is a PHEIC. But Zika ceased to be a PHEIC. All our events took place after this. Then it is our mandate to decide if it is a PHEIC. How is only three cases a PHEIC?”

“In November, it was still a public health emergency and we would have had to report it. There is no way we would not have reported it, had there been cases then,” says a senior health ministry official. Two senior health ministry officials also said the same thing off record. The Wire also reached out to the WHO’s IHR focal point, Dr Ritu Chauhan. She declined to comment on the issue.

“Whatever is the protocol, it has been acted upon and followed. We made a decision following the protocol laid down in the IHR. Anupriya Patel, the minister of state for health, made a statement on this in parliament. Central teams went to the area to conduct surveillance with the help of the state government. The country has a system. We followed our rules and regulations,” says Dr A.C. Dhariwal, who is India’s national focal point for IHR and also the director for the National Centre for Disease Control (NCDC). The Wire earlier reported how the NCDC’s disease surveillance programme has not reported any cases of Zika, not even the ones that have now been made public.

But WHO’s Geneva headquarters has a different understanding from the Indian government. “Regardless of whether there is a Public Health Emergency of International Concern or not,” countries must report to WHO any event which meets the criteria laid down in the IHR, says Monika Gehner from WHO’s communications department in response to a question from The Wire.

Gehner also said, “All public health events, regardless of the disease of the event,” must be notified to the WHO if they meet these criteria. This means that despite the change in Zika’s PHEIC status in November 2016, all countries still have to report cases of Zika to the WHO, subject to the four criteria laid down in the IHR.

However, she added that Indian authorities “appropriately reported” the events to the WHO, after they conducted “in-depth investigations”. This leaves some ambiguity on whether India is in breach of the IHR. The Wire has sought a clarification from the WHO in Geneva on this as well.

What international health regulation have to say

The IHR are considered “central to ensuring global public health security.” The have no enforcement mechanism but are led by the belief that “the potential consequences of non-compliance are themselves a powerful compliance tool.” In this vein, the WHO says, “With today’s electronic media, nothing can be hidden for very long.” The WHO warns that one of the results of non-compliance can be morbidity and mortality of the affected populations and public outrage, apart from a “tarnished international image” and travel and trade restrictions.

The IHR require state parties to “notify” the WHO of disease events. Article 6 of the IHR prescribes notification, while the “decision instrument” or “algorithm” to help countries decide is prescribed in Annex 2 of the IHR.

While the government has taken a narrow view, explaining that only PHEICs need to be notified, the IHR in fact is much broader. Gehner’s clarification also points to this. In fact, the present IHR was born out of the need to have a more expanded understanding of diseases which need notification – the IHR in 1969 focused only on three quarantinable diseases: cholera, plague and yellow fever. It’s the resurgence of old diseases and the emergence of new ones in the 1990s that pushed the global community to expand the scope of IHR.

“The obligation to notify WHO under the IHR (2005) is therefore much broader and covers a wide range of potentially international public health risks” including communicable diseases, contaminated food, chemical contamination of products or the environment, release of radio nuclear material or other toxic release, says Annex 2 of the IHR.

The IHR require all 194 state parties to notify the WHO on any “events” where there is “a manifestation of disease or an occurrence that creates a potential for disease,” especially “epidemic prone disease,” of special national or regional concern that “have demonstrated the ability to cause serious public health impact and to spread rapidly internationally”. A disease is defined as an illness or medical condition “that presents or could present significant harm to humans”.

Countries are asked to notify the WHO only if they answer “yes” to two out of four yes or no questions. These four questions are fairly simply designed and they make up the decision instrument or algorithm, in the IHR:

Countries have 24 hours to notify the WHO. The Indian government said the 34-year-old woman was confirmed to test positive for the Zika virus at the end of February and the other two cases were confirmed by the end of March. But India informed the WHO about this on May 15, 2017. Counting from November, when BJMC Ahmedabad had first detected the case of Zika in the 34-year-old mother, the government has taken six months to inform the WHO about the presence of Zika-positive cases. Counting from March, India has taken one and a half months to inform the WHO about this.

China’s SARS epidemic in 2003 was a lesson in government disclosure and accountability. The country denied the outbreak for weeks, hiding it from WHO inspections. Beijing then struggled to bring it under control and was widely criticised for its secrecy and its related international impacts. In more recent times, the WHO was criticised for its go-slow on Ebola in 2015, where they refused for months to declare Ebola a public health emergency. “The cost of the delay was enormous,” said Ashish K. Jha to CNN. Jha is the director of the Harvard Global Health Institute.

Since India’s Zika case is the first to be announced since the November 2016 change in Zika’s PHEIC status, it will be observed for its handling. “The strategy of secrecy has already been debunked by the international community. The case of SARS in 2003 showed how the world paid a heavy price because China hid it. Non disclosure is supposed to be a thing of the past,” says Dr Nitish Dogra, a public health physician and alumnus from the Johns Hopkins Bloomberg School of Public Health.

From IHR’s point of view, there are public health benefits for early notification and consultation with WHO. “A consistent application of the processes used by States Parties for event communications will support WHO global surveillance and response functions for international public health security,” says the IHR. The focus is on the safety of the global community.