The Centre should end the practice of using wrong claims when the numbers clearly go against its promises. Beneficiaries wait in a long queue to receive a dose of COVID-19 vaccine, at a government hospital, Bolpur in Birbhum district, Tuesday, June 01, 2021. Photo: PTI

This announcement is interesting because India has never administered 12 crore vaccine doses in any prior month. However, a closer examination of the data for May and June 2021 throws up two conclusions.

First, a similar announcement was made by the Centre for May 2021 too, and it was hardly fulfilled.

Secondly, the GoI’s new announcement for June 2021 is not based on any realistic assessment of the vaccine industry’s capacity to supply. Such announcements are made only to create an atmosphere of “positivity”, as the Centre’s spokespersons have often tried to do in the past.

Actual production in May 2021

“Make available” was the keyword in both these press releases.

It was not doses actually allocated and received by either entity. The press releases only meant that “x” quantity of vaccine doses can be purchased in “y” month.

How was this figure arrived at? It appears that the Centre worked backwards from a total figure for vaccine production and then divided the doses across itself and states and private hospitals. 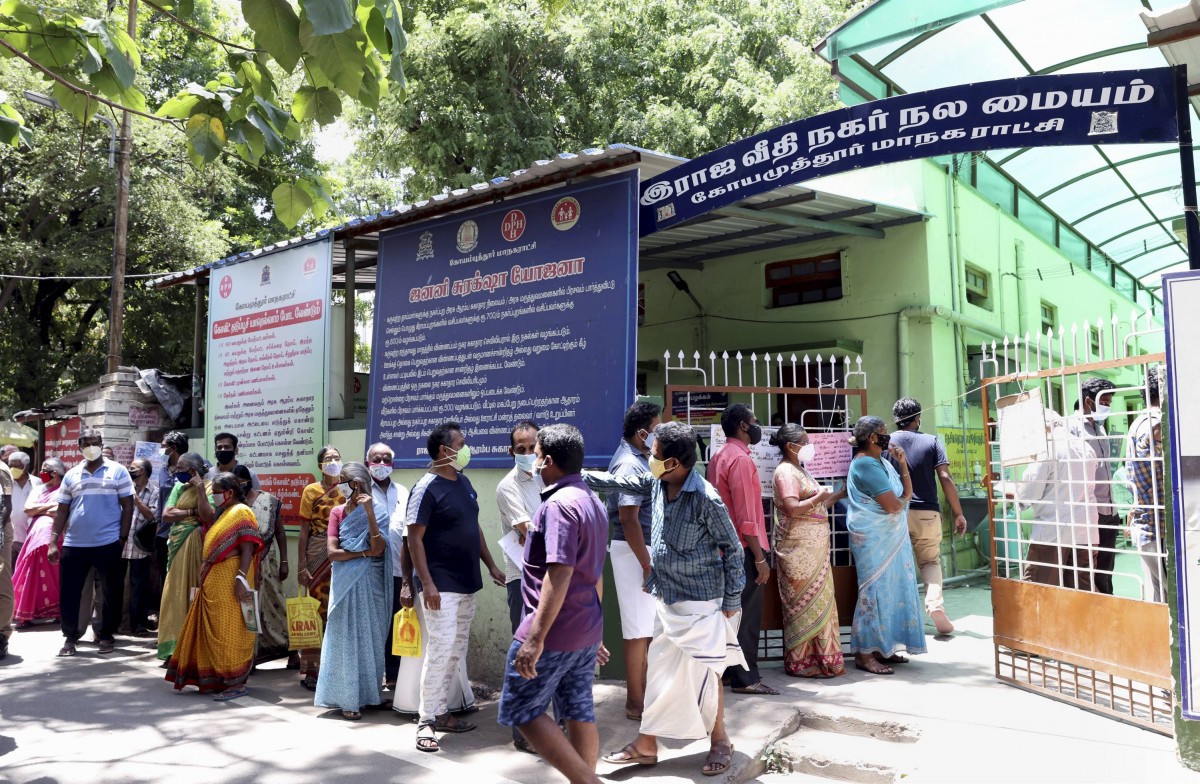 The Centre then divided this 8.5 crore vaccine doses into two parts, as per the 50:50 formula announced on April 19, 2021. It kept for itself 4-4.5 crore doses and then said that the remaining 4-4.5 crore doses were “made available” for states and private hospitals for direct purchase in the month of May.

Also read: The Modi Govt Wants to Vaccinate All Indians. Its Plan Points the Other Way. In all these processes, producers have prior estimates of the rate of replication of the virus in these cells. These prior estimates would be true only if the cells divide and grow as expected. But they may not do so at the expected rate. A range of variations exist in production conditions, which essentially makes biological production fundamentally different from the more precise industrial production. Prior estimates can go widely off-the-mark. An industry analyst is quoted in King’s report thus:

“It never goes to plan at the start…Conditions do not translate directly from small to large scale, mixing is different, pressures are different, the heat transfer is different. All this needs to be optimised at each scale. It is normal to have hiccups.”

Examples of such hiccups are many across the world.

For example, the yields from an AstraZeneca plant in Belgium, owned by Novasep Holding, was far lower than the prior estimates. Similarly, Johnson & Johnson also faced difficulties with yields in its plants in Europe. Such problems, combined with a refusal of vaccine producers to be fully transparent about their actual capacities, are possibly the reasons why India did not produce 8.5 crore doses in May 2021. We will not know the full story till Serum Institute of India and Bharat Biotech decide to confess.

The case in India

Take the case of May 2021. Only 5.98 crore doses were administered in May. If, according to the Centre’s affidavit, India’s production capacity is 8.5 crore doses per month, where are the rest of the vaccine doses?

The outcome is that states are being consistently misled by the Centre on what is available for their purchase in a month. The Centre knows this and yet prefers to continue with the practice to keep up the aura of “positivity”. Now, there is one way to check for these discrepancies. We must look at the proportion of doses administered (not imaginarily “made available”) from the Centre’s quota and through direct purchases by state governments and private hospitals. However, the Centre does not provide us data with that level of disaggregation. Therefore, we know that the numbers do not tally, but we simply cannot pinpoint as to why.

The Centre may argue that we are missing out on the production in May that is still in stock for use in June. In other words, there was indeed a higher level of production in May, but it was not administered in May. So, there is no real issue of the numbers not tallying. Let us now see if this claim could be true.

On May 30, the Centre had said that 1.75 crore doses were still with the states to be administered. This was the stock. States have always disputed these stock figures put out by the Centre. Let us still work with the figure for the time being. This would mean that a total of 7.73 crore vaccines (5.98 + 1.75 = 7.73) were produced in May 2021.

However, there were stocks on April 30 too, which were administered in May. We should deduct end-April stocks from end-May stocks. The stock on April 30 was 1 crore doses.

On the net, then, the difference is close to 75 lakh doses only. Even if this was true, there were still close to 1.7-2 crore unaccounted doses in May. Where are those doses?

Let us now come to the promises made by the Centre for June 2021. The Centre says 12 crore doses will be available in June 2021. Remember, India administered only 5.98 crore doses in May 2021.

How can it double the rate of administering vaccinations in just one month? Where is the fresh supply going to come from? 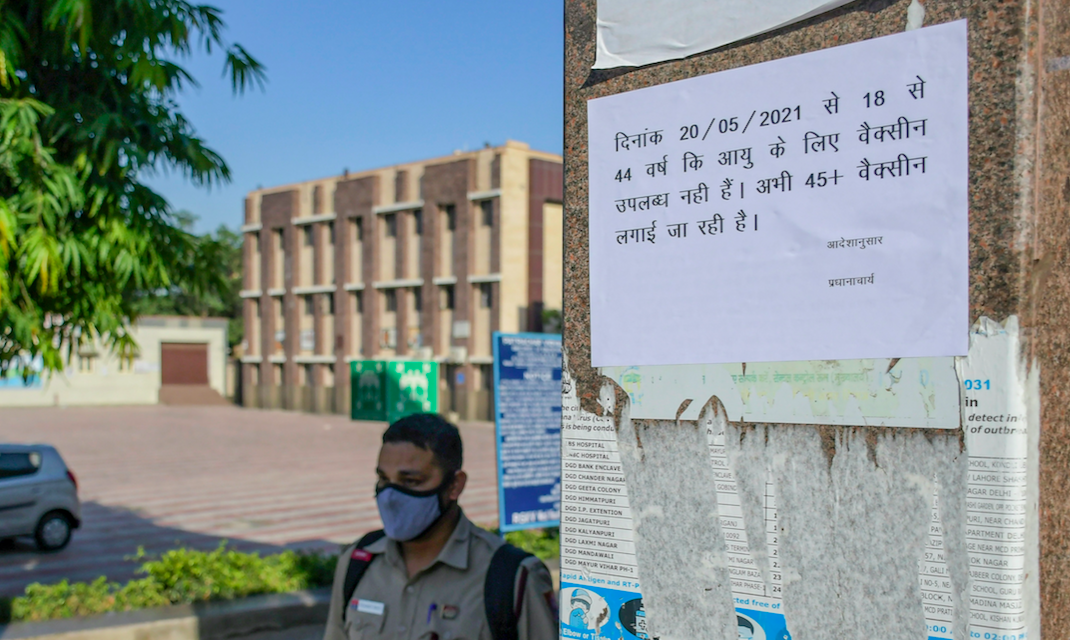 Notice saying ‘No vaccine available for people below 45 years’ pasted after Delhi government announced to halt vaccination for 18-44 people, Saturday, May 22, 2021. Photo: PTI

How can we, then, consider such future projections to hold true? Large imports of Sputnik V would begin only by August 2021. The three new Covaxin licensee companies would start production only by November or December 2021.

Therefore, the number of doses promised for states in June 2021 is just another unrealistic projection. The figures released are far removed from the reality of vaccine productivity in India. They are put out only to deceive the public into a mood of “positivity”. Facts do not matter; only narratives do.

What is the reality?

The Centre should end the practice of deception, of using wrong claims and fake promises. A democratic government should tell its citizens the reality, however unpalatable it might be. And the reality is that India cannot vaccinate 100% of its population before 2024 at the present rate. If, by then, vaccines for children also become available, India can complete the task only by 2025 or 2026.

R. Ramakumar is professor at the Tata Institute of Social Sciences, Mumbai.