Nine million courses is all that is left from Merck’s donation of 100 million courses, the rest of which have already been requested for and taken by other countries. 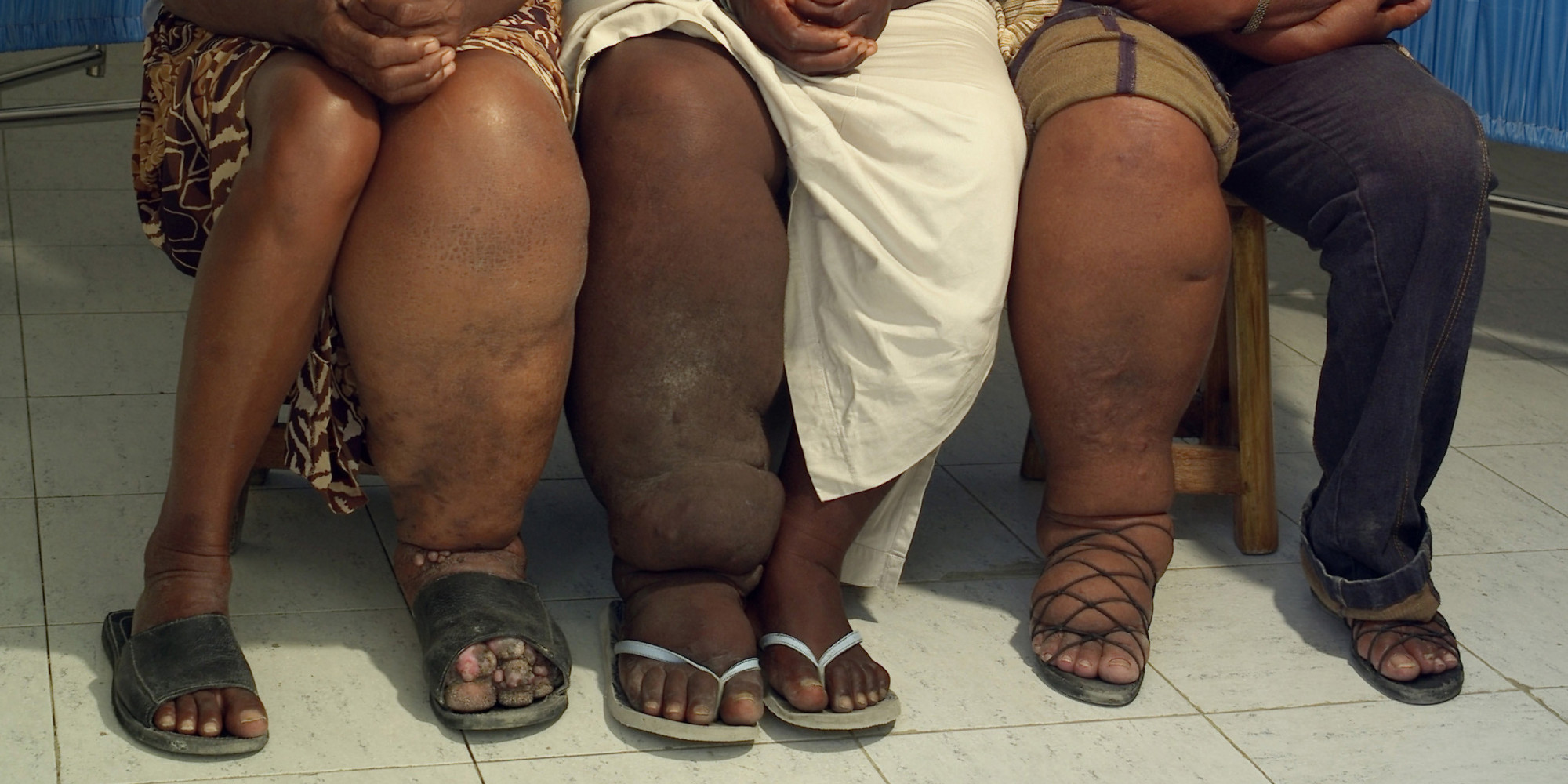 Elephantiasis is a parasitic infection which is triggered by mosquito bites. Credit: Facebook

New Delhi: With an estimated 31 million people who are infected with what is known as ‘elephant’s foot’ in the country, India has committed to eliminate elephantiasis by 2020. Patients could be benefitted by the drug ivermectin. There are nine million free courses of ivermectin left in pharma company Merck’s donation programme for this year.

But India is short on time and has to race to apply for these courses by the end of this month. Nine million courses is all that is left from Merck’s donation of 100 million courses, the rest of which have already been requested for and taken by other countries.

If India applies in time, the full tranche (27 million tablets for the nine million courses) could arrive by December. If India misses the deadline, India will have to apply for next year’s donation programme by Merck. All of this will slow down India’s efforts to eradicate the disease, by 2020. 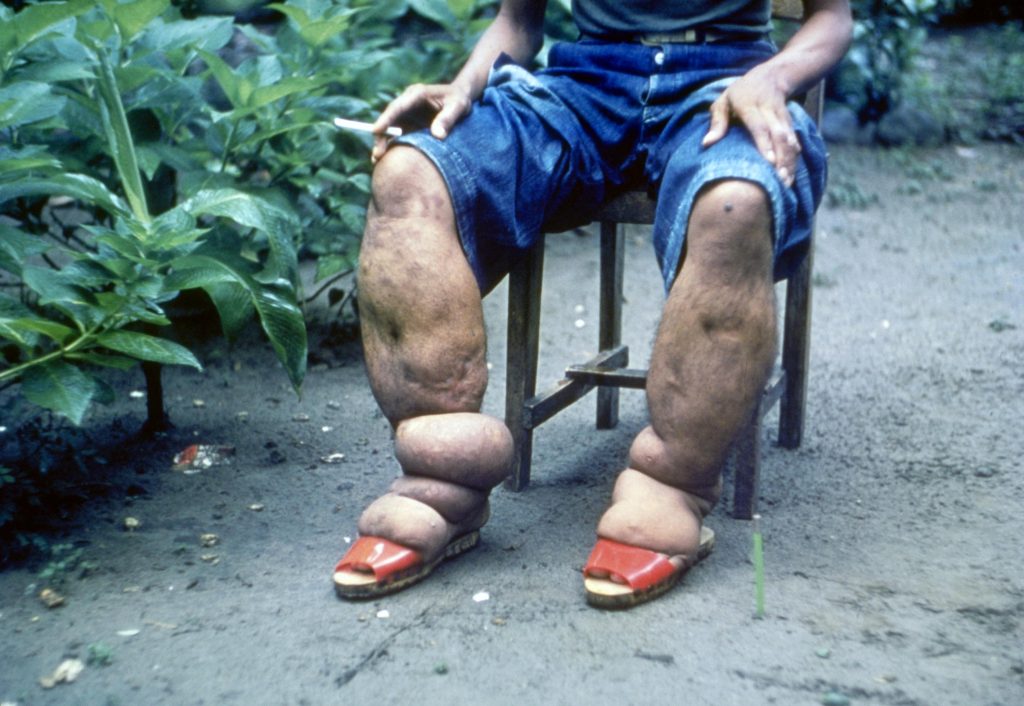 Elephantiasis of leg due to filariasis. Credit: Wikimedia Commons

“It takes time. We had a preliminary discussion on this on June 15. If things work out in time, we can apply and the first tranche could come by August, the rest can come by December. Logistics, packing, shipping, all of this takes time. But we have to clear many regulatory issues for Merck first,” said a health ministry official.

All of this notwithstanding, India went ahead and announced the ‘Accelerated plan for elimination of lymphatic filariasis’ on June 13. Copies of the plan have not been made public or given to the press but The Wire has reviewed a copy of it.

The new medical approach to elephantiasis

Lymphatic filariasis, or elephantiasis (as it is commonly known) is considered a neglected tropical disease. It manifests as massive disfigurement and disability of body parts like the leg, hand and scrotum. It is a parasitic infection which is triggered by mosquito bites.

For years, the medical approach to it was to administer albendazole, either by itself, or in combination with diethylcarbamazine citrate or ivermectin. Now, new research has shown that it is, in fact, a triple-drug therapy of well-known drugs – albendazole, diethylcarbamazine citrate and ivermectin – that could do the trick of stopping the spread of infection. All of these drugs have been known and used for decades. It is the combination of these drugs which has been the breakthrough, in the treatment of elephantiasis.

India receives all three drugs in this regimen, for free, by donation. India’s role is to ensure that the drugs are requested in time and that India clears other regulatory hurdles for the companies donating the drugs. Apart from Merck’s ivermectin, GlaxoSmithKline is donating albendazole to India currently.

The data on the triple-drug therapy has come from recently processed field studies in India, Haiti, Indonesia and Papua New Guinea. Large randomised community studies were conducted in these countries and they found that this triple-drug combination is “as safe as the two drug regimens when used in the mass drug administration.”

In November, the WHO recommended this triple-drug therapy to eliminate elephantiasis. The specifics of this new recommendation have been published in their new guidelines on the disease.

“This new regimen will help improve programmatic impact and lead to the ultimate elimination of lymphatic filariasis in many regions where millions of people are at risk of contracting the disease,” said Dr Soumya Swaminathan, deputy director general of the WHO. She was herself involved in the study, in her earlier role as director general of the Indian Council of Medical Research.

What regulatory problems may slow down the entry of ivermectin?

In 2015, Satoshi Omura and William Campbell were awarded the Nobel prize in medicine for their work on a number of drugs, including ivermectin. The Nobel committee said that ivermectin’s importance was “immeasurable” in treating the health of people in the poorest countries.

These two scientists developed this drug in the late 1970s.

In 1987, Merck partnered with the WHO to distribute this drug in unlimited quantities for free, through their donation programme. In over three decades of this donation, Merck has distributed over two million treatments of this drug.

In dealing with so many countries for this donation, Merck asks countries to simply request for the drug in time and remove regulatory hurdles for the company.

India is currently trying to work fast to do both of these things.

“One formality that needs to be worked out is the question of tax. Merck has said it is a donation and they will not be willing to pay tax. We have to work on that. Secondly, we have to get regulatory clearances from the drug controller. We have applied,” the official said.

The official also said that the ministry is confident of this happening in time. “We have already been getting albendazole which is widely used for deworming, on the same donation mode and without tax implications for the company. Secondly, ivermectin is not a new drug. Eight or nine brands are already approved by the drug controller.”

India’s goals on eliminating lymphatic filariasis have changed several times – The 2002 National Health Policy had fixed 2015 as the goal. This was revised to 2017, even while the global goal at the time was 2020. As recently as March 2017, government officials were saying this target would be achieved in endemic districts at least. India has now changed this to 2020.

If India misses the target on eliminating lymphatic filariasis, it also weighs the world’s burden down – India has 39% of the world’s population at risk of the disease. It is endemic to 256 districts in India.