Monday marked yet another record daily spike in new cases, with 8,392 reported in the last 24 hours. 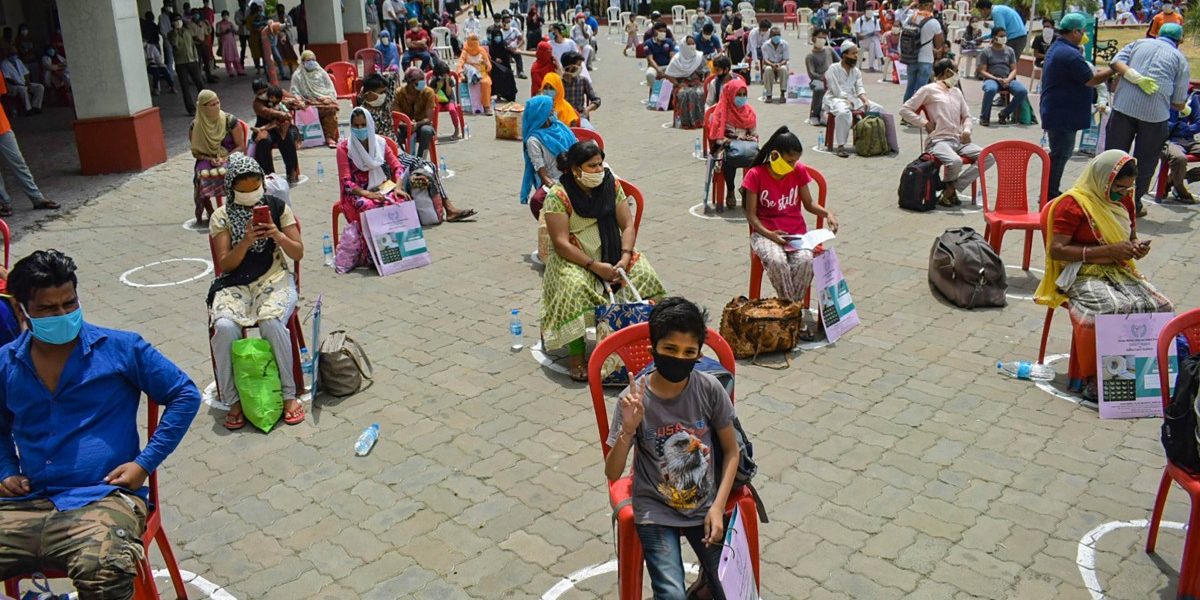 People who have recovered from COVID-19 wait to be discharged at a government hospital in Bhopal. Photo: PTI

New Delhi: The death toll due to COVID-19 rose to 5,394 and the number of cases climbed to 1,90,535 in the country, which registered biggest single-day spikes of 230 deaths and 8,392 cases till Monday 8 am, according to the Union health ministry.

India is now the seventh worst-hit nation by the novel coronavirus pandemic in terms of total cases, having overtaken France and Germany. In terms of active cases, India comes in fifth – behind only the US, Brazil, the UK and Russia.

The number of active COVID-19 cases stood at 93,322 while 91,818 people have recovered and one patient has migrated, the ministry said.

“Thus, around 48.19% patients have recovered so far,” a senior health ministry official said. Though official spokespersons have been highlighting the Indian recovery rate, they do not mention that the global recovery rate is also the same or slightly better.

Starting from Monday, India has largely eased lockdown restrictions, except in containment zones.

Of the 230 deaths reported since Sunday morning, 89 are in Maharashtra, 57 in Delhi, 31 in Gujarat, 13 in Tamil Nadu, 12 in Uttar Pradesh, eight in West Bengal, seven in Madhya Pradesh, five in Telangana, three in Karnataka, two in Andhra Pradesh and one each in Bihar, Punjab and Rajasthan.

The death toll has reached 51 in Karnataka and 45 in Punjab.

Jammu and Kashmir has reported 28 fatalities due to the disease, Bihar has 21, Haryana has 20 deaths, Kerala has nine while Odisha has reported seven deaths so far.

Himachal Pradesh, Jharkhand and Uttarakhand have registered five COVID-19 fatalities each while Chandigarh and Assam have recorded four deaths each so far.

Meghalaya and Chhattisgarh have reported one COVID-19 fatality each, according to the ministry’s data.

More than 70% of the deaths are “due to co-morbidities”, according to the health ministry website.

Across the world, there have now been 6,171,182 confirmed cases around the world as of Monday morning.

According to the Johns Hopkins University, the global death toll due to COVID-19 stands at 372,116.

Armenian Prime Minister Nikol Pashinyan on Monday said he had tested positive for the novel coronavirus, speaking during a Facebook live video.

“I didn’t have any symptoms, I decided to take a test as I was planning to visit the frontline”, said Pashinyan, adding that his whole family was infected.

Armenia, with a population of 3 million, had registered 9,402 confirmed cases of the coronavirus as of Monday and 139 deaths.

The new coronavirus is losing its potency and has become much less lethal, Alberto Zangrillo, the head of the San Raffaele Hospital in Milan in the Lombardy region, which has borne the brunt of Italy’s coronavirus contagion, said on Sunday.

A second doctor echoed Zangrillo’s observations. “The strength the virus had two months ago is not the same strength it has today,” said Matteo Bassetti, head of the infectious diseases clinic at the San Martino hospital in the city of Genoa.

The government urged caution, saying it was far too soon to claim victory.