Malnutrition Remains Leading Cause of Death for Children Under Five: Study

While there are several indicators for malnutrition, low birth weight is the biggest contributor according to a new study published in the Lancet

Earlier this month, Uttar Pradesh police filed a case of “criminal conspiracy” against a journalist for reporting that children in the district of Mirzapur were being served plain chapatti and salt under the midday meal scheme at school.

There have also been reports of people starving to death in Jharkhand after they were unable to access government-subsidised rations.

And yet India has only just undertaken the “first comprehensive estimate” of trends in child and maternal malnutrition for every state of the country and published a report in the Lancet.

The paper is part of the Global Burden of Disease Study and has looked at all available sources for data on malnutrition in India between 1990 and 2017. It was collaboratively written by government scientists at the Indian Council of Medical Research and other institutions.

Malnutrition is risk for 68% of children under five

“India has struggled with malnutrition for decades, such as during the Bengal Famine in 1943,” said Balram Bhargava, director general of ICMR, at the launch of the paper in Delhi on Wednesday.

Bhargava said that the good news is that deaths from malnutrition have dropped, and India which once used to import food grains, is now exporting it thanks to the agricultural revolution.

Malnutrition predisposes a person to catch other diseases. So it can manifest in the form of neonatal disorders, lower respiratory tract infections and diarrhoeal diseases. 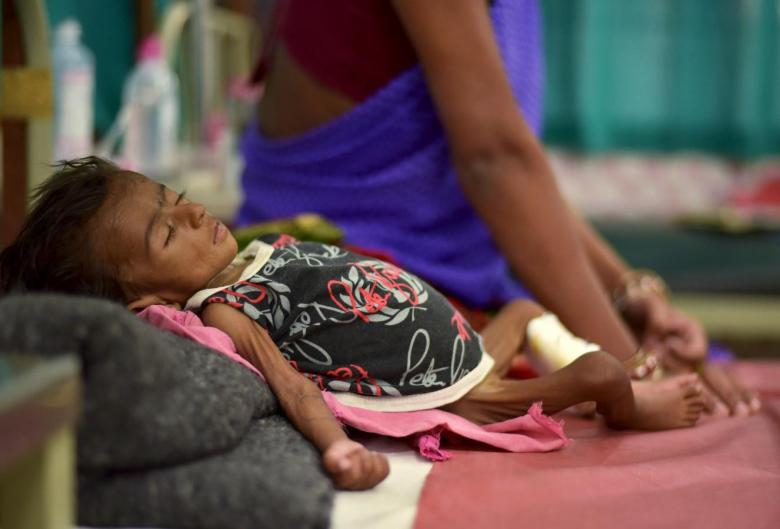 Two-month-old Jyoti lies in a bed in a malnutrition intensive care unit in Dharbhanga Medical College in Dharbhanga in Bihar, India, on April 16, 2015. Photo: Reuters/Poulomi Dey/Files

Child anaemia is very high, at 60%, while for adult women, it is 54%. Only 53% of mothers follow the exclusive breastfeeding practice in India.

How are states doing?

Lalit Dandona, director of India’s state level disease burden initiative, said that some states are not on track to achieve India’s nutrition targets. He said that while there have been some changes, the rate of change may not be fast enough to reach the targets.

“We can expect some changes in the run up to 2022. The curve is already bending. Programmes like Swachh Bharat can really help to bring down disease, diarrhoea and stunting. We have a great opportunity to bend the curve further and should use it,” said Vinod Paul, a member of the NITI Aayog and a former paediatrician at the All India Institute of Medical Sciences.

Also read: In 10 Graphs, the Worrying State of Public Health and Malnutrition in Maharashtra

One of the unique features of these series of papers which Indian scientists have been putting out on various diseases as part of the Global Burden of Disease Study is that they look at health issues nationally and also for various states and they all come to the conclusion that policy measures need to be geared at a sub-national level.

Paul also spoke about how 85% of the human brain is already developed within the first two years of life: “All damage or benefit is already done by the age of two. If we don’t act while children are very young, we lose their potential forever. There’s a lot of good we can do if we fix nutrition.”