It took 110 days for coronavirus infections in the country to reach one lakh, while just 44 days more to go past the six-lakh mark. 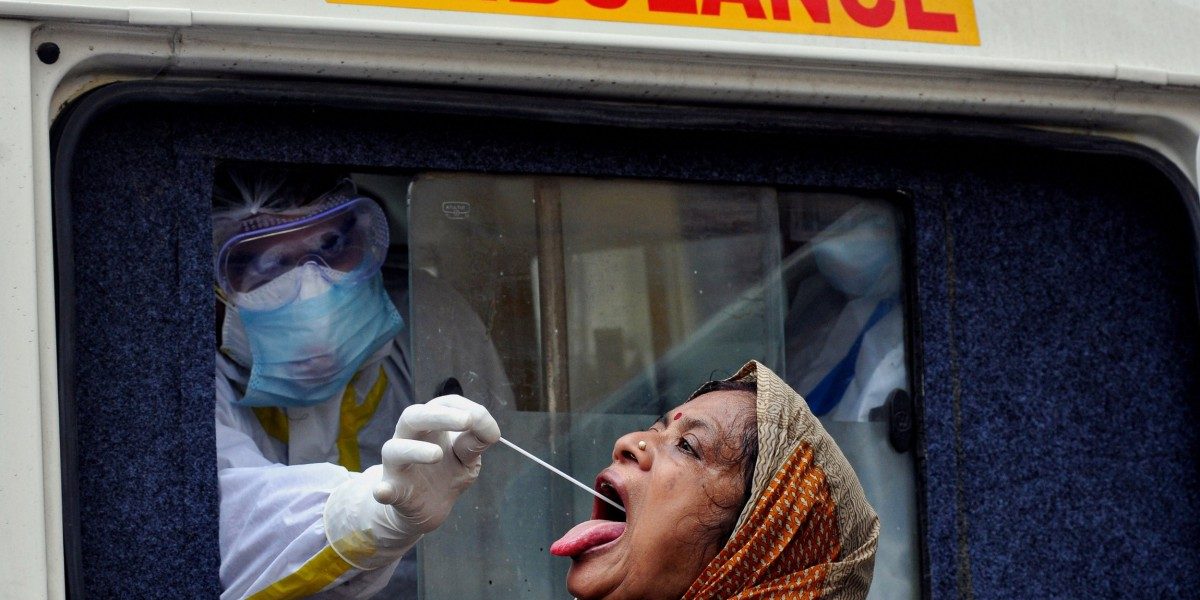 New Delhi: India’s COVID-19 tally zoomed past six lakh on Thursday with a single-day increase of 19,148 cases, just five days after it crossed the five-lakh mark, while the death toll rose to 17,834, according to Union health ministry data.

It took 110 days for coronavirus infections in the country to reach one lakh, while just 44 days more to go past the six-lakh mark.

The country’s COVID-19 caseload increased to 6,04,641 on Thursday, while 434 persons have succumbed to the disease in the last 24 hours, data updated at 8 am showed.

With a steady rise, the number of recoveries stands at 3,59, 859 while one patient has migrated. There are 2,26,947 active cases of coronavirus infection at present in the country.

“Thus, around 59.52% of patients have recovered so far,” an official said.

This is the sixth consecutive day when coronavirus infections increased by more than 18,000. There has been a surge of 4,14,106 COVID-19 cases from June 1 till date.

According to the ICMR, the number of tests for detection of the disease crossed the nine million mark on Thursday.

Of the 434 deaths reported in the last 24 hours, 198 are from Maharashtra, 63 from Tamil Nadu, 61 from Delhi, 21 each from Uttar Pradesh and Gujarat, 15 from West Bengal, nine from Madhya Pradesh, eight from Rajasthan, seven each from Telangana and Karnataka, six from Andhra Pradesh, five from Punjab, four each from Haryana and Jammu and Kashmir, three from Bihar and one each from Chhattisgarh and Goa.

Jharkhand has registered 15 deaths, Chhattisgarh 14, Assam and Puducherry 12 each, Himachal Pradesh 10, Chandigarh six, Goa four and Meghalaya, Tripura, Ladakh and Arunachal Pradesh have reported one fatality each, according to the health ministry.

More than 70% deaths took place due to co-morbidities, it said.

Puducherry has recorded 714 COVID-19 cases, Nagaland 459, Chandigarh 446 and Dadra and Nagar Haveli and Daman and Diu together have reported 215 COVID-19 cases.

Arunachal Pradesh reported 195 cases, Mizoram has 160 cases, Sikkim has 101, Andaman and Nicobar Islands has registered 100 infections so far, while Meghalaya has recorded 52 cases.

According to Johns Hopkins University, the global death toll due to COVID-19 stands at 516,255. Another 5,480,394 people have recovered from the disease.

The UN Security Council on Wednesday finally backed UN chief Antonio Guterres’ March 23 call for a global truce amid the coronavirus pandemic, adopting a resolution after months of talks to win a compromise between the United States and China.

The resolution, drafted by France and Tunisia, calls for “all parties to armed conflicts to engage immediately in a durable humanitarian pause for at least 90 consecutive days” to allow for the delivery of humanitarian aid.

Also read: India’s Economic Response to the Pandemic – Has it Been Enough?

Negotiations on the resolution were stymied by a standoff between China and the United States over whether to urge support for the World Health Organisation. “We have really seen the body at its worst,” Richard Gowan, International Crisis Group UN director, said of the council. “This is a dysfunctional Security Council.”

Nations who fail to use every mechanism available to combat the still-raging novel coronavirus will struggle to beat it, the World Health Organization (WHO) said on Wednesday.

“Some countries … have taken a fragmented approach. These countries face a long, hard road ahead,” Director General Tedros Adhanom Ghebreyesus told a virtual briefing from WHO headquarters in Geneva, without singling out any nations.

More than 10.5 million people have been infected globally and more than half a million have died since the COVID-19 disease first emerged in China.

Tedros said local flare-ups were inevitable as some nations began lifting lockdown restrictions. “But countries that have the systems in place to apply a comprehensive approach should be able to contain these flare-ups locally and avoid reintroducing widespread restrictions,” he said.