Journalists are turning to novel sources, but they need to focus resources on the right data. 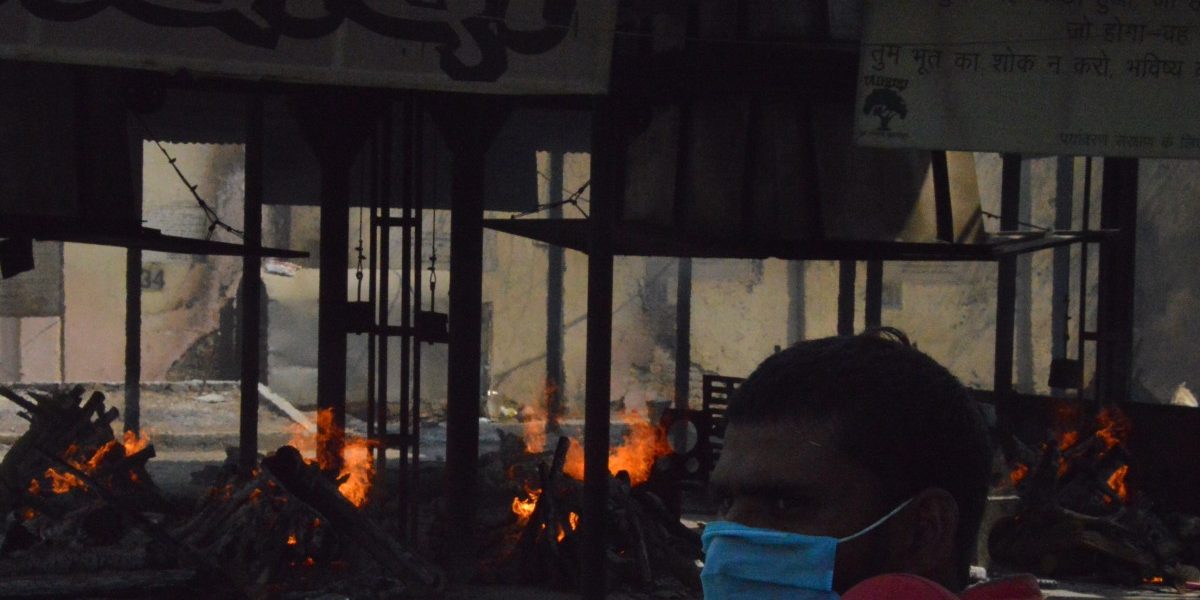 For over one year now, Indian journalists and researchers have been attempting to answer one simple question: what is the real toll of COVID-19 in India? While large gaps exist in official data, the unconventional methods being used by many in the media to uncover suppressed numbers also suffer from some errors. We explain what the problems in the numbers are, and propose a public-private partnership to fix death undercounting.

The protocol on recording deaths during the current pandemic comes from the Indian Council of Medical Research. It follows the World Health Organisation’s principle that authorities be as liberal as possible in recording COVID-19 deaths. The guidelines say that a COVID-19-positive person’s death should be recorded as a COVID-19 death under U07.1, the WHO’s International Classification of Diseases (ICD-10) code for a confirmed COVID-19 death, even if the person dies without symptoms of the disease. Even if a positive patient appears to die of respiratory failure, the underlying cause of death – as distinct from the mode of death – should be listed as COVID-19. If a COVID-positive person has comorbidities, the patient has a higher risk of dying of respiratory failure. But the comorbidities should not be listed as the underlying cause of death; the cause of death remains COVID-19. If a person dies without being tested for COVID-19, or had tested negative but displayed COVID-19 symptoms, the death should be classified as a “suspected or probable COVID-19” death.

In practice, these guidelines are not being followed. Officials from multiple states have told one of us that only deaths of persons who tested positive prior to death and died soon after of causes easily identified with COVID-19 were being counted as COVID-19 deaths. If a COVID-19 positive person tests negative a few weeks later but dies of clear symptoms including lung conditions, many such deaths are not being counted as COVID-19 deaths. Most states that we know of are also not recording suspected COVID-19 deaths, even as testing delays particularly during the second wave mean that suspected COVID-19 positive people are dying in hospital corridors and at home. Additionally, deaths counted officially as COVID-19 deaths are coming almost exclusively from hospitals, even though fewer than half of all deaths in 2018 were in hospitals.

Also read: At Least 197 COVID-19 Patients in India Have Died Because of Oxygen Shortage in Recent Weeks

Simultaneously, there appears to be a spike in deaths of people seeking care for other health conditions too, with access to healthcare under strain, the reported deaths of people needing dialysis or oxygen for non-COVID-19 health conditions being one such example. Taken together, journalists are seeing a mismatch between reported COVID-19 deaths and deaths on the ground in the cities and villages they know intimately, and are calling this out.

Given the gaps in official COVID-19 data, many journalists are turning to crematoria and burial grounds as data sources. But simply aggregating data from crematoria will not solve the problem either.

There are many reasons for this. One, registers at most crematoriums and burial grounds in India are not maintained strictly; many journalists have been depending on these registers for the total number of bodies cremated to understand underreporting, which can be misleading. Counting the cremations done with COVID-19 protocols is also not perfect. Many times, dead bodies of people who are suspected to have been contacts of COVD-19 patients or had any COVID-19 symptoms are also cremated using the same protocol, as a precautionary measure.

Collecting data from crematoriums in India, or even within a state or city in India does not throw up a consistent pattern. For example in Bengaluru, bodies of those who died of COVID-19 and those who simply took a COVID-19 test are cremated at the same places. There is hardly any follow up to see if the hundreds who died before their COVID-19 results came in did indeed have the infection. Their deaths many times are not reconciled by the government. In Bengaluru crematoria, a different ID is assigned to a person who tests positive, but that is not the case elsewhere.

In Kerala, on the other hand, most crematoria do not maintain proper records and in many cases, despite the family having a death card where the doctor has marked COVID-19 as a reason, the crematorium fails to mention this. There are also many cases where hospitals tell the kin the COVID-19 positive results orally and therefore without a documentary proof, the crematorium records it as non COVID-19 death.

Additionally, people from rural areas and smaller towns have been coming to big cities to get treated, and are likely to be cremated there, potentially inflating numbers for big cities. Also, a handful of crematoria in some cities are conducting all COVID-compliant cremations. So even if one was to simply look at the register and note down COVID-19 and non COVID-19 patients, the anomalies in the data are huge. 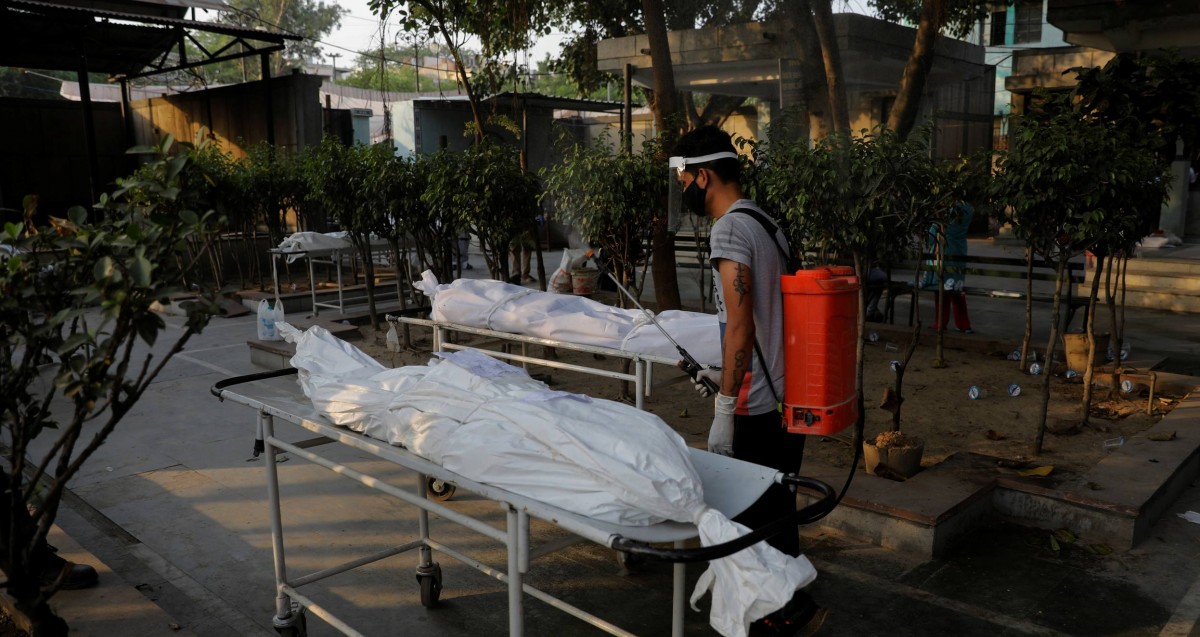 A municipal worker sprays disinfectant on the bodies of victims who died due to the coronavirus disease (COVID-19), at a crematorium in New Delhi, India, May 10, 2021. Photo: Reuters/Adnan Abidi

Given these constraints, journalists would do better to seek “all-cause mortality” data for the pandemic years and for previous years as a comparison. Partly because of the pandemic, it has become widely known that death reporting is incomplete in India. However, overall death registration is much better than cause of death reporting. In 2018, the last year for which estimates are available, the Office of the Registrar General and Census Commissioner of India estimated that 86% of all deaths were reported to civil registration authorities. Death registration was estimated to be complete in 16 out of 36 states and union territories.

Kerala is the only Indian state that has made all-cause mortality data for 2020 available thus far, and is also a state where civil registration is complete. Kerala’s data shows that registered deaths in 2020 were less than registered deaths in 2019. This should not be taken to mean that there was no under-reporting of deaths in the state, or that the pandemic reduced mortality in Kerala. A portion of deaths are registered with a delay. For instance, in 2018, more than 20% of the deaths were registered after a month of death, and as many as 2% deaths were not registered after a year. The number of deaths in 2018 in Kerala that were not registered even after a year in Kerala were 4810. This is greater than the total number of COVID deaths documented in the state in 2020 (3096). It is likely that in time, Kerala’s Civil Registration System will reveal the extent of excess mortality.

In states where the civil registration system is incomplete, such as the large north Indian states, the Sample Registration System could help. India’s sample registration system has provided annual estimates of fertility and mortality since 1970. It collects information on mortality and fertility in a representative sample of villages and urban blocks. The SRS actually collects information on mortality monthly –  in its “form no. 7”, SRS surveyors compile a monthly report of deaths. This information, if released, could also be used to estimate excess mortality in the first and second COVID waves.

Also read: COVID-19 in Bihar: Horror in Chausa Town As Dead Bodies Wash Up on Banks of Ganga

Keeping in mind both the practical limitations on the ground and the broader goal of near-accurate mortality data to aid with immediate policy decisions, we make the following recommendations:

One, the government must reiterate to state and local authorities that the aim must not be to keep COVID-19 death numbers low. Towards this end, all governments must strictly follow the WHO codes for confirmed and suspected deaths. The media for its part should not immediately equate high reported deaths with a “failure” of that authority, and must parse the numbers to see if it is the result of better reporting, which should be encouraged.

Two: local, state and national authorities must immediately and proactively release “all-cause mortality” data from their civil registration systems for past and current years. In this regard, Mumbai city and Kerala state are honourable exceptions. Even here, though, age-disaggregated information would be helpful.

Three: reporters should arm themselves with the best practices of journalism when reporting deaths from crematoria, burial grounds and other non-traditional sources. Wherever possible, documentation should be collected, comparisons made with past years, and attempts made to ensure that like is being compared with like.

Four: For both researchers and journalists, it is helpful to avoid guesstimates of under-reporting. It is now fairly well-established that deaths and infections are under-reported. This under-reporting likely varies vastly across time and space. From a democratic and scientific perspective, it is helpful to make well-documented contributions, rather than interpolations based on conjecture.

And five: citizens, the media, the academic community and elected representatives must join together to demand these basic datasets as a matter of right, and not allow every conversation around the pandemic and data be hijacked by partisan bickering. Demanding data that should rightfully be public should be a bipartisan goal.

It is only through a combination of proactive release of information by public authorities and responsible journalism that India can hope to get closer to a true estimate of the direct and indirect toll of the COVID-19 pandemic, a number that will have far-reaching value for public health and planning. For the last few months, it has sometimes appeared that evidence has not mattered in the Indian pandemic response. Far from being reason to give up, this should only make us better equipped and more determined to do our jobs better.

Aashish Gupta is a PhD candidate at the University of Pennsylvania, Dhanya Rajendran is Editor-in-Chief of The News Minute and Rukmini S. is an independent data journalist based in Chennai.