The current case-load doubling time is already reportedly higher than it was in September 2020, when India rapidly approached the first peak. People walk or stand at a crowded beach amidst the spread of the coronavirus disease (COVID-19) in Mumbai, India, April 4, 2021. Photo: Reuters/Francis Mascarenhas

Chennai: India’s daily COVID-19 cases rocketed up by 103,558 on Monday, the biggest such daily increase, according to official data. This jump takes India’s total case load since the COVID-19 epidemic’s start to 12.59 million, a hair’s breadth behind Brazil, at 13 million.

This dubious milestone also makes India the only country other than the US to add a six-digit number of new COVID-19 cases in a 24-hour period. (At its peak, Brazil added a little under 80,000 cases, late last month.) If this trend of new cases continues, India is likely to surpass Brazil this week. The current case-load doubling time is already reportedly higher than it was in September 2020, when India rapidly approached the first peak.

The surge in India parallels a slowly quickening pace of vaccinations as well. As at 9:50 am on April 5, according to the Union health ministry website, the government had administered 79 million doses of Covaxin and Covishield combined. However, experts have also said that this pace may not be good enough considering India – and the world more broadly – also faces a ‘second wave’ of outbreaks that threatens to dwarf the first one last year, which peaked in September at around 99,000 new daily infections.

For example, economist Shruti Rajagopalan wrote for Bloomberg that India could soon reach a point where both the national and global demand for vaccines could overwhelm the domestic manufacturing capacity, putting people everywhere at risk of a longer-lasting pandemic.

So, Rajagopalan continued, “The first thing the government should do is accelerate approval of some of the vaccines in use in other countries, including those from Pfizer Inc., Moderna Inc. and especially the logistically easier, single-shot Johnson & Johnson vaccine. If those companies can’t expand production quickly enough, the government should pursue licensing agreements to make their vaccines in India.”

In addition, she recommended that the Government of India allow AstraZeneca/Serum Institute and Bharat Biotech, the makers of Covishield and Covaxin, respectively, “to sell doses on the private market” on top of the state purchasing and distributing them at lower cost.

Prime Minister Narendra Modi conducted a high-level meeting to take stock of the country’s epidemic situation on April 4. “The meeting comprised senior functionaries from the Prime Minister’s Office, health ministry, department of biotechnology and Niti Aayog” – Hindustan Times reported – and discussed “what was leading to the rise in cases; how prepared our health infrastructure currently was to handle the rush; and what more is needed to be done to ensure the system does not get overwhelmed.”

The government said in a statement released over the weekend:

“The Prime Minister directed that central teams consisting of public health specialists and clinicians be sent to Maharashtra in view of high case load and deaths, and likewise to Punjab and Chhattisgarh because of the disproportionate number of deaths being reported there.”

At the same time, Maharashtra state – which, according to the Union health ministry, has contributed 57% of total cases and 47% of deaths in the last two weeks – has resolved to impose a lockdown from April 5. Kerala is the next worst affected state, but with 1.1 million cases thus far, it is well behind Maharashtra.

However, other, smaller parts of the country are reporting worrying trends. For example, according to Reuters, national “deaths jumped by 478, still one of the lowest fatality rates in the world”. But only last week, Durg in Chhattisgarh reported 6,000 cases and 38 deaths in seven days. The local hospital has only 500 beds and the morgue, only eight freezers, according to NDTV. Local doctors are already contemplating withdrawing non-COVID-19 services to cope.

Indeed, health officials in many states, but especially in Delhi, Chhattisgarh, Karnataka, Kerala, Maharashtra, Punjab and Uttar Pradesh, are also wary of running out of hospital beds for those who may need specialised care. According to Hindustan Times, the national test positivity rate on April 3 was 8%, up from 3.9% on March 20.

These concerns are also compounded by fears of mutant strains of the novel coronavirus spreading through the population, lingering concerns over the AstraZeneca shot and more recent concerns over Bharat Biotech’s Covaxin. 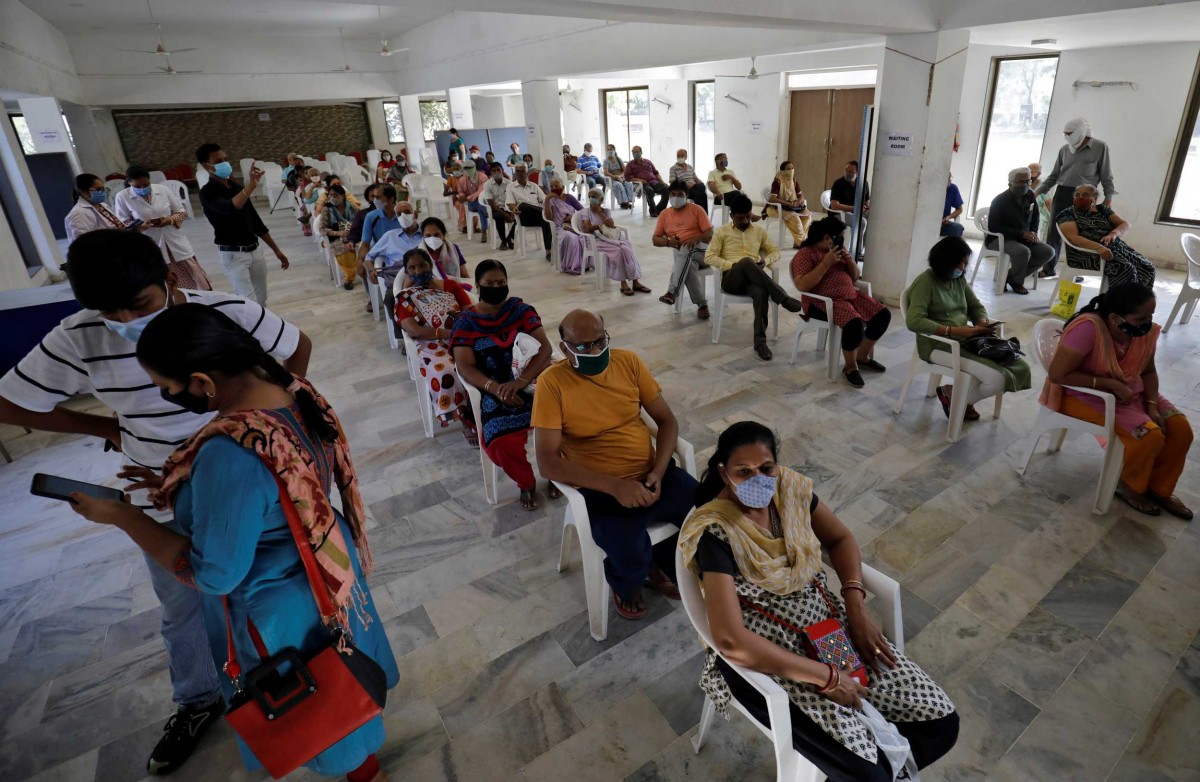 People sit in a waiting area to receive a dose of Covishield, a coronavirus disease (COVID-19) vaccine manufactured by Serum Institute of India, at a vaccination centre in Ahmedabad, India, April 2, 2021. Photo: Reuters/Amit Dave

When India’s vaccination drive kicked off on January 16, the government set a target of vaccinating 300 million people by July. This seems unlikely at present; aside from logistical issues and other rising commitments, the government also admitted – albeit somewhat late – that there was considerable vaccine hesitancy among recipients over the nature of approval to Covaxin and, more recently, over the state’s handling of adverse events following immunisation (AEFIs).

Hilda Bastian, founding member of the Cochrane Collaboration, wrote for The Atlantic on March 30 that it’s not easy for officials anywhere in the world to communicate some of the rarer risks associated with specific COVID-19 vaccines with equal efficiency and certainty. Her point that vaccine hesitancy could arise even if officials are too secretive about nuanced details of potential and rare side-effects of a shot is notable. This is why transparency is key:

“It may be that at some point soon a non-vaccine cause will be established, or treatments will render the condition manageable. Until that happens, though, regulators must do their best to maintain calm, perspective, and transparency. Imagine if they’d reacted more conservatively from the start, and waited to say or do anything until the number of people who turned up with this condition had reached into the hundreds. … If the vaccine regulators are out of step with their communities’ values, transparency will enable them to calibrate.”

However, Indian health ministry officials have not shared daily AEFI reports after February 26 despite a growing number of concerning reports. Then on March 17, the immunisation division of the health ministry released a note (Z.16025/02/2018-IMM) that it had considered eight AEFIs. A subcommittee determined four were “coincidental”, one was “unclassifiable” and three were designated B1: “reviewing factors result in conflicting trends of consistency and inconsistency with causal association to immunisation”.

No other details are available, including of the deliberations, the members of the committee, why these eight cases and not others, what details were considered, etc. The statement ended saying none of the eight AEFI cases have been found to be related to the vaccine the recipients received, all Covishield. (The victims’ ages ranged from 36 to 61 years; they were from Aurangabad, Ballari, Belagavi, Harda, Mancherial, Pilibhit, Saran and Thane.) Quartz India also reported on March 18 that India has no plans to pause its Covishield rollout.

Watch: COVID-19 Surge: Need To Limit, if Not Rule Out, Large Indoor Events

On the other hand, a group of researchers affiliated with the British Society for Haematology published a document providing fine definitions and recommended management of the unusual clotting-related side-effects that AstraZeneca shot recipients in Europe reported, which first gave rise to concerns over the vaccine. Europe’s and Canada’s AEFI assessments have been similarly detailed and in the open.

Covaxin is also in hot water. Last week, Brazil’s drug regulator rejected Bharat Biotech’s application to import Covaxin for distribution in the South American country after the body determined that the company wasn’t following good manufacturing practices at some of its Indian facilities.

One of the principal complaints was that Bharat Biotech wasn’t doing enough to verify that the procedure it used to inactivate the virus before loading it into the vaccine fluid was working as intended. This is important because inactivated virus vaccines like Covaxin have some significant advantages over other options, and which specifically arise from this inactivation process. As researchers wrote in a paper published in 2014 (hat-tip to Priyanka Pulla):

“…successfully formulated inactivated viral vaccines on the market today have a heightened safety aspect as compared to live attenuated viral vaccines. The fact that the pathogen is completely inactivated directly negates reversion to a virulent phenotype within the vaccine recipient. Moreover, these inactivated vaccine viruses are non-transmissible as their live attenuated counterparts. … The improved safety profile of inactivated vaccines entails that they are also suitable for the rapidly increasing group of immunocompromised individuals.

Independent scientists and other experts reacted to Brazil’s snub by demanding that the Indian government itself review Bharat Biotech’s vaccine-manufacturing facilities. The government has already said it expects the company to deliver 120 million doses by August 2021 for use within India. (India’s drug regulator had summarily approved both Covaxin and Covishield for the national vaccination drive after Modi had visited these companies’ facilities a month or two prior.)

The final thorn is the new novel coronavirus variants circulating in the population. Last week, virologist Shahid Jameel told The Wire that a part of the surge in cases in Maharashtra could be the handiwork of a “double mutant” strain: one mutation made it more infectious and another enabled it to evade protections afforded by the AstraZeneca, Johnson & Johnson and Novavax vaccines.

But even as an Indian effort sequence viral genomes from samples obtained from different parts of the country is progressing slower than expected, political leaders have been quick to point fingers at the variants when faced with questions of subpar preparedness.

Note: This article was edited at 9:52 am on April 6, 2021, to clarify that Shruti Rajagopalan’s suggestion to allow vaccine-makers to sell doses on the private market was in addition to, and not a substitute for, the state’s vaccination drive.