India implemented a lockdown 14 days after it recorded 50 cases. The relatively higher number of cases recorded in India may partly be the result of the government losing two precious weeks before implementing any serious physical distancing measures. Airport officials wear masks as they wait to help passengers after having their temperatures taken at Bandaranaike International Airport, Sri Lanka, on January 24. Relative to the other three countries, the government in Sri Lanka acted swiftly to contain the spread of the contagion. Photo: Reuters

In part one of this three-part series, we presented a picture of the spread of COVID-19 in four South Asian countries. In the second part, we discuss two issues: How prepared – in terms of health infrastructure and income levels – were the four countries to deal with the pandemic? How did the governments respond, in terms of public health measures, to the pandemic?

How prepared were India and the other big countries of South Asia to deal with the coronavirus pandemic? To address this question, we present, in Table 1, data on some indicators of health infrastructure, health expenditure and poverty for Bangladesh, India, Pakistan and Sri Lanka from the World Development Indicators Database of the World Bank. 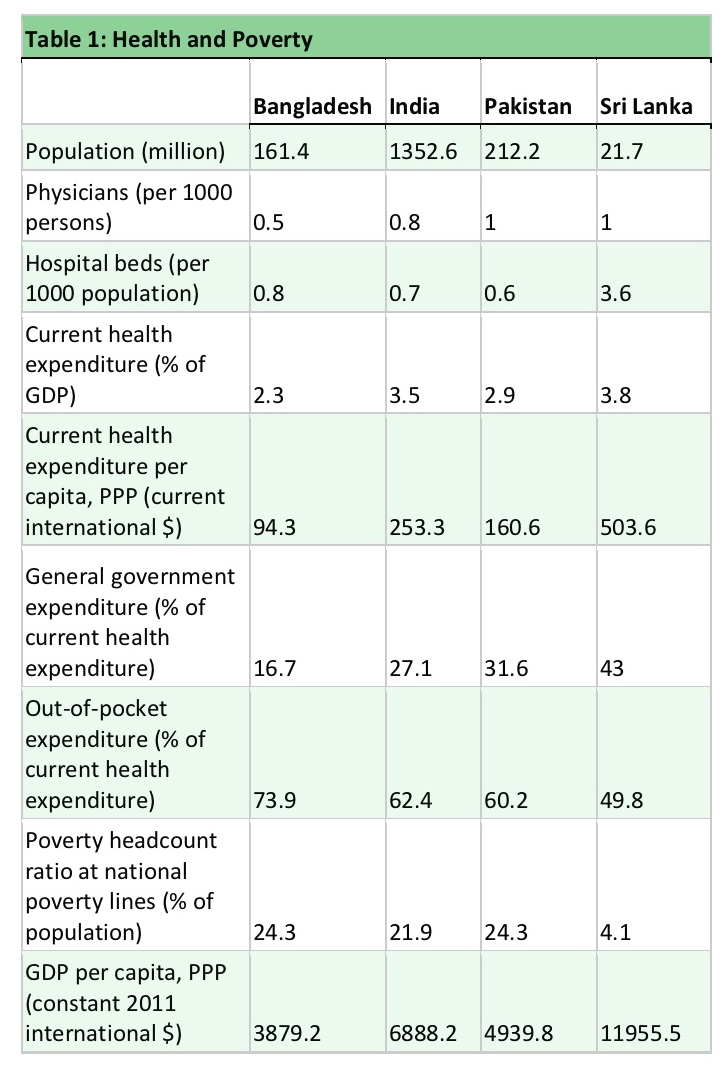 Next, let us look at two measures of health expenditure: as a share of GDP and in per capita terms. Current health expenditure as a share of GDP is close among the countries – with Bangladesh having the lowest, at 2.3 percent, and Sri Lanka having the highest, at 3.8 percent. But these countries are very different in terms of population and GDP. Hence, a better way to compare healthcare expenditure is to look at per capita figures.

The final set of indicators displayed in Table 1 refers to average income and poverty. Per capita gross domestic product (GDP), which measures average income in a country, is lowest in Bangladesh, and highest in Sri Lanka. Pakistan and India fall in between, with India having a higher average income than Pakistan.

Poverty is measured by the head count ratio, which is defined as the proportion of persons who fall below the national poverty line. This is a very rough and imperfect measure of the proportion of people who are vulnerable in economic terms, and who would be most in need of help to cushion any negative income shock due to the pandemic. In terms of poverty headcount ratios, there is very little difference between Bangladesh (24.3% of population), India (21.9% of population) and Pakistan (24.3% of population) – though India’s number is a little lower than the other two countries. The poverty headcount ratio in Sri Lanka, at 4.1% of the population, is about 5 times lower than the other three countries.

Conclusion: How the four stack up on health infrastructure

In terms of preparedness, Sri Lanka is best placed. It is not only the richest country among the four studied in this article, but also has the largest expenditure on health – with the greatest share contributed by the government. Bangladesh is at a disadvantaged position – not only because it is the poorest, but also because of the low contribution of the government to an already low total health expenditure. India and Pakistan fall in between these two extremes.

Governments in South Asia responded to the pandemic with two sets of policies. The first related to measures for physical distancing in society, which could reduce the speed of transmission of the virus, and increased testing to detect and isolate infected patients.

The second set of policies related to expenditures that were necessary to deal with the health and economic impacts of the pandemic. Using information from the Johns Hopkins University coronavirus dashboard and the International Monetary Fund’s COVID-19 country-level policy tracker, we have summarised basic information about government responses in Table 2, and will now discuss each component in detail. 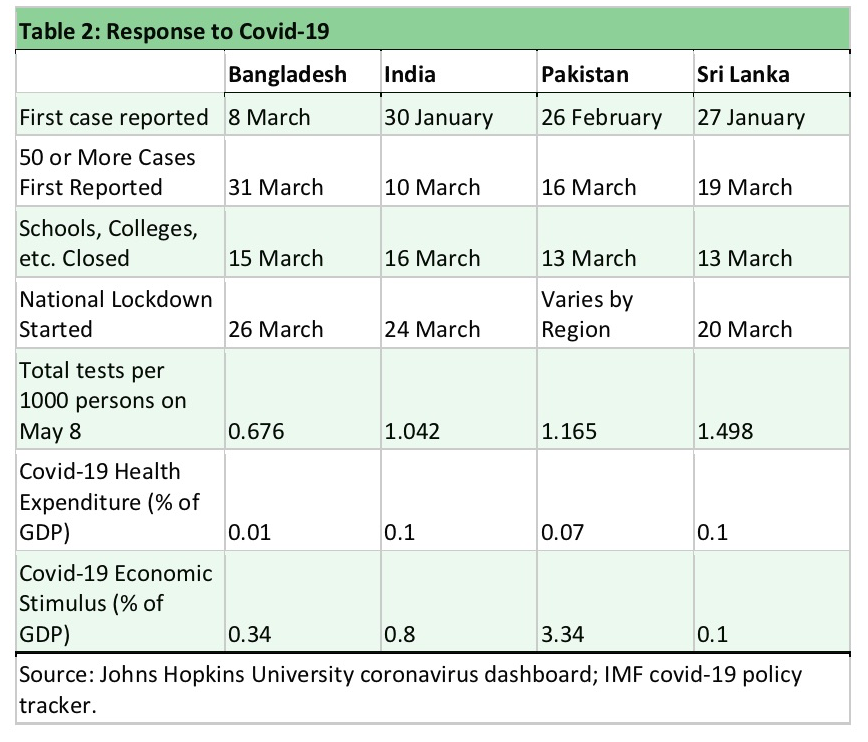 In response to the emergence of the virus, the government reduced international flights and imposed thermal scanner checking of international travellers and sailors of freight ships. By March 15, the government imposed a 14 day obligatory quarantine for all travellers entering the country. However, travel restrictions and quarantine programs were only partially effective at this point. The lack of adequate quarantine facilities, for instance, resulted in the unrestricted movement of returning expatriates and travellers. Other crucial non-therapeutic measures of social distancing and sheltering-in have been patchy. Schools were shut down by March 15 but a broader lockdown was imposed only on March 26. According to reports in the media, the lockdown will continue till May 16.

Although its first positive case emerged by January 30, India started preventive measures only in early March.  The COV-IND-19 Study Group’s March 23 report has a dated list of initiatives taken by the Indian government. Drawing on this list we see the following sequence of important policy interventions.

On March 3, India banned travellers from China, Iran, Italy and South Korea. On March 11, it suspended visas granted to nationals of France, Germany, and Spain. On March 16, the Central government proposed social distancing measures and recommended closure of educational institutions. On March 22, India observed a day of self-imposed ‘janata curfew,’ and on March 24, the prime minister announced that the country would go under total lockdown for a period of 21 days within four hours! Lockdown on such a short notice generated panic among citizens who ignored all principles of social distancing and  rushed to crowded stores to stock up essentials. The lockdown was extended on April 14, and has been further extended till May 17.

The health ministry of Pakistan introduced screening measures at its major airports by the end of January. But social distancing advisory and caution against public gatherings were issued only by mid-March. From the outset, preventive measures lacked uniformity and there have been divisions within the government about the strategies to contain the pandemic. Although schools and colleges were shut from March 13, Prime Ministerl Imran Khan has consistently argued against a nationwide lockdown, citing its adverse effects on wage earners and the economy in general. Consequently, varying levels of shutdowns have been imposed in different provinces and cities. Apparently, this ambiguity in shutdown policy has sent confusing messages, leading to frequent violations of physical distancing measures.

Relative to the other three countries, the government in Sri Lanka acted swiftly to contain the spread of the contagion. The government of Sri Lanka issued a preliminary social distancing advisory on January 20, a week before the first COVID-19 case of a Chinese tourist in Sri Lanka was confirmed. On the same day, screening of international travelers began in earnest. From early March, incoming travellers from Italy, Iran, and South Korea were required to be quarantined for two weeks in government facilities created for the purpose. The country suspended on-arrival visas for tourists on March 11. Schools and universities were declared closed on March 13 and from March 16 onwards, people were asked to work from home.

In addition, the government announced an all-island curfew on March 20, and everyone, except those working in the essential services, were required to stay home. Retailers were instructed to deliver essential goods to the homes of the people. These services were further streamlined by the creation of a special task force to distribute essential items.

In terms of physical distancing measures, all countries initially responded by monitoring incoming international passengers, and by limiting possibilities of congregation and social gathering. Each country eventually moved to a full scale lockdown, the only exception being Pakistan (which has had province-level variations on this count).

There is an on-going debate about the effectiveness of lockdowns in dealing with the pandemic. A recent study in the Lancet argues that a one size fits all approach to the pandemic, centred on strict lockdowns and high technology health care, might subvert two key principles of global health: context and social justice and equity.

In practical terms, lockdowns do not eliminate the virus, but only give time to the government to ramp up testing, prepare health infrastructure and build community networks for tracing and isolating infected patients. If the government does not use the time afforded by the lockdown to address these issues, then a lockdown inflicts disproportionate pain on the poor and already-vulnerable without even containing the pandemic.

While we agree with the conclusions of the Lancet study, we do not pursue that angle in this article. We feign a neutral attitude to lockdowns and instead ask: when will a lockdown slow down the spread of the pandemic? Two factors seem crucial: the timing of the lockdown and the effectiveness of its implementation. While it is difficult to quantify the second, we can much more precisely look at the former. To do so, we only need to ask: At what stage of the pandemic’s spread was the lockdown announced and implemented?

From the information summarised in Table 2, we see a clear pattern. Bangladesh implemented a lockdown several days before it had recorded 50 cases; Sri Lanka announced a lockdown one day after it recorded 50 cases; Pakistan moved towards implementing province-level lockdowns within a few days of reaching 50 cases (March 23 in Punjab, March 21 in Sindh, etc.).

India is an outlier in this respect. It implemented a lockdown 14 days after it had recorded 50 cases. Our conjecture is that the relatively higher number of cases recorded in India is partly the result of the government losing two precious weeks before implementing any serious physical distancing measures – recall that India reached 50 cases on March 10 and the lockdown was implemented (without much planning) on March 24.

Looking at the number of tests per 1000 persons in any country provides only incomplete information about the adequacy of tests. A better way to gauge whether a country is conducting an adequate number of tests is to look at the trajectory of the test positivity rate (number of positives per 100 persons tested). If the test positivity rate is low and stable, or is high but consistently falling, then we can conclude that the country in question is on the right track – so far as testing is concerned. 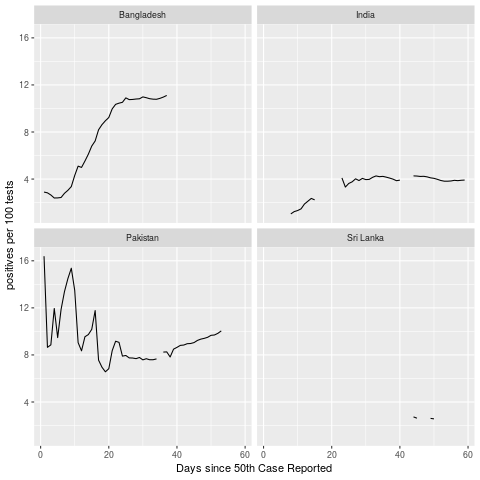 Figure 1. Test positivity rate (positives per 100 tests) for four South Asian countries till May 08, 2020. Source: The data are taken from the Our World in Data website

Sri Lanka’s performance in terms of testing is very good. The test positivity rate had fallen to 2.62% by early May (though we have very few data points from the early part of the pandemic). Sri Lanka needs to keep testing at the rate it already is.