The IMA was protesting against the Centre's move allowing post-graduate practitioners of Ayurveda to be trained to perform surgical procedures. Members of Junior doctors Association stage a protest in solidarity with Indian Medical Associations strike against 'mixopathy' and demanding the withdrawal of the CCIM notification, at Guwahati Medical College and Hospital (GMCH) in Guwahati, Friday, December 11, 2020. Photo: PTI

New Delhi: Scores of doctors at several hospitals in Delhi and other cities across the country joined the protest call of the IMA, on Friday, against the Centre’s move allowing post-graduate practitioners of Ayurveda to be trained to perform surgical procedures.

In a statement, the IMA said a large number of doctors at various hospitals across the country responded to the call and withdrew services, which affected patients.

The Resident Doctors’ Association of AIIMS-Delhi, in a statement, said, “This step will not only encourage the already rampant quackery, but also undermine the safety of the public. We request the government of India to retract this notification immediately.”

“We stand with our medical fraternity in this regard and support the strike called by the Indian Medical Association,” they added.

Shivaji Deb Barman, president of the FORDA, an apex body of various RDAs in Delhi, said doctors in Delhi will observe a black-ribbon protest, but “will not withdraw any services”.

The IMA’s call had sought withdrawal of non-essential and non-COVID services between 6 am and 6 pm on Friday to protest against the notification.

“The notification issued by the CCIM to allow legal practice of surgeries by Ayurveda practitioners and the formation of four committees by the NITI Aayog for the integration of all systems of medicine will only lead to ‘mixopathy’,” the IMA said. 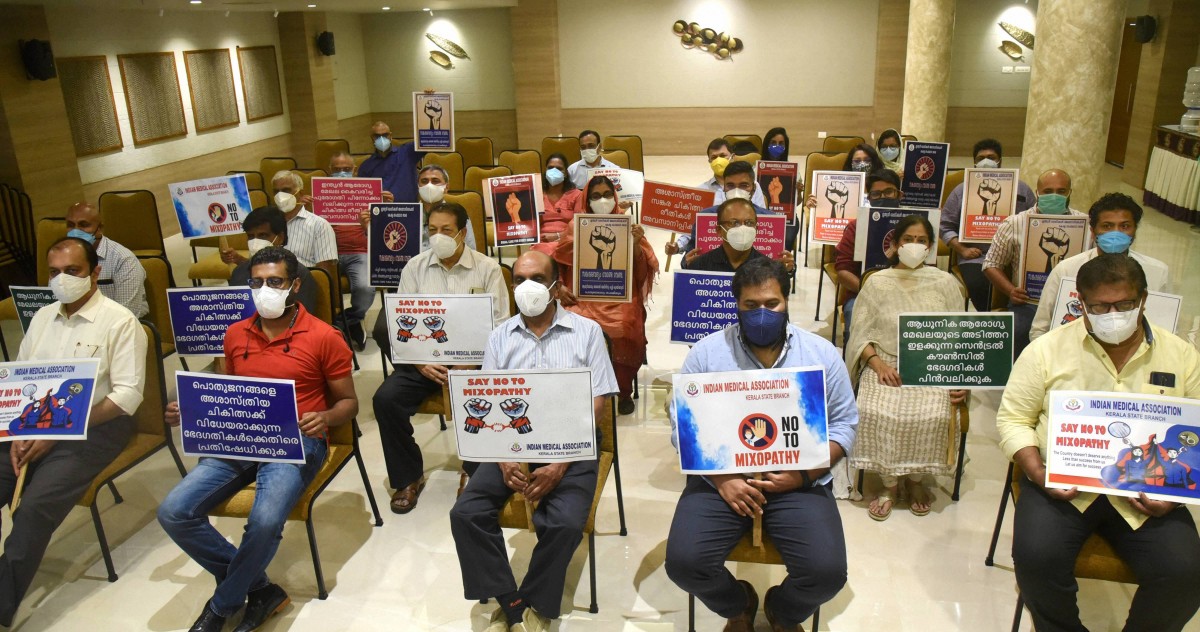 IMA president Dr Rajan Sharma said, “Allowing doctors of Ayurveda to conduct surgeries would be a compromise with the health of patients. The notification of the amendment to the CCIM Act on post-graduate Ayurveda surgery and the entitlement to study and practise independently have to be seen as another step in advancing and legitimising mixopathy,” he said.

The November 20TH notification by the CCIM, a statutory body under the AYUSH ministry to regulate the Indian systems of medicine, listed 39 general surgery procedures and around 19 procedures involving the eye, ear, nose and throat by amending the Indian Medicine Central Council (Post Graduate Ayurveda Education) Regulations, 2016.

The AYUSH ministry has maintained that the notification by the CCIM does not amount to any policy deviation or new decision.

On Friday, doctors at various hospitals in Maharashtra, Uttar Pradesh, Madhya Pradesh, Goa, among other states, responded to the IMA’s call by striking work or withdrawing OPD services. Around 1,500 doctors in Goa took part in the nationwide protest called by the IMA. As a mark of protest, these 1,500 doctors attended to only emergency cases, IMA’s Goa unit president Dr A. Samuel told PTI.

An IMA delegation met Union Minister of State for AYUSH, Shripad Naik, on Friday and submitted a memorandum to him seeking withdrawal of the notification that allows post-graduate practitioners of Ayurveda to be trained in performing surgical procedures, he said.

Medical services were hit in Kerala as government and private doctors struck work in support of the call. “There were no regular OP services and elective surgeries. Only emergency and COVID-19 treatments were provided,” IMA Kerala president P.T. Zacharias said.

During this period, only the treatment of COVID-19 patients and emergency services will remain functional, he said, adding that the Indian Dental Association has also extended its support to the IMA.