Karnataka increased the monthly salaries of anganwadi workers to Rs 10,000 last year but the ministry of women and child development has approved only Rs 4,500 – both lower than the workers' demand. 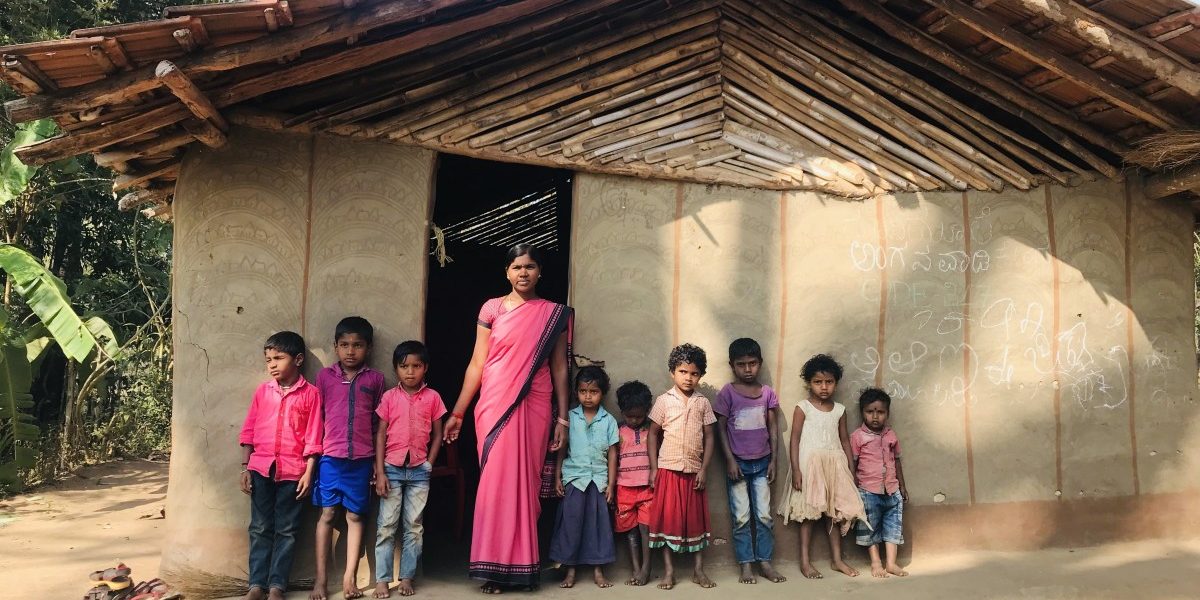 Sita B., a young Yerwa woman, works as an anganwadi worker and helper in Manamelkudi, a village inside the Nagarhole National Park and Tiger Reserve in Mysuru district, Karnataka. She takes care of 14 Jenu Kuruba children, aged three to six years, registered with the anganwadi. Photo: Nidhi Jamwal

Mysuru, Tumakuru and Ballari, Karnataka: The mud-and-bamboo anganwadi is about three kilometres from her house, deep inside the Nagarhole National Park and Tiger Reserve in Mysuru district, Karnataka. But little keeps Sita B., a young Yerwa tribe woman, from walking the distance every day to the Manamelkudi village anganwadi, where she works as worker and helper.

On the way, she picks up fresh vegetables and eggs to serve 14 children of the Jenu Kuruba tribe, aged three to six years, registered with the anganwadi. There are nine more children aged six months to three years, and Sita gives them their monthly share of take-home rations under the Integrated Child Development Services (ICDS) scheme of the Government of India.

ICDS is the world’s largest programme for early childhood care and development, with over 158 million children (2011 Census) in the 0-6 years age group, and pregnant and lactating mothers in the country. It offers six services: supplementary nutrition, preschool non-formal education, nutrition and health education, immunisation, health check-up and referral services, through 1.36 million functional anganwadi centres spread across all the districts in the country (as of June 2018). 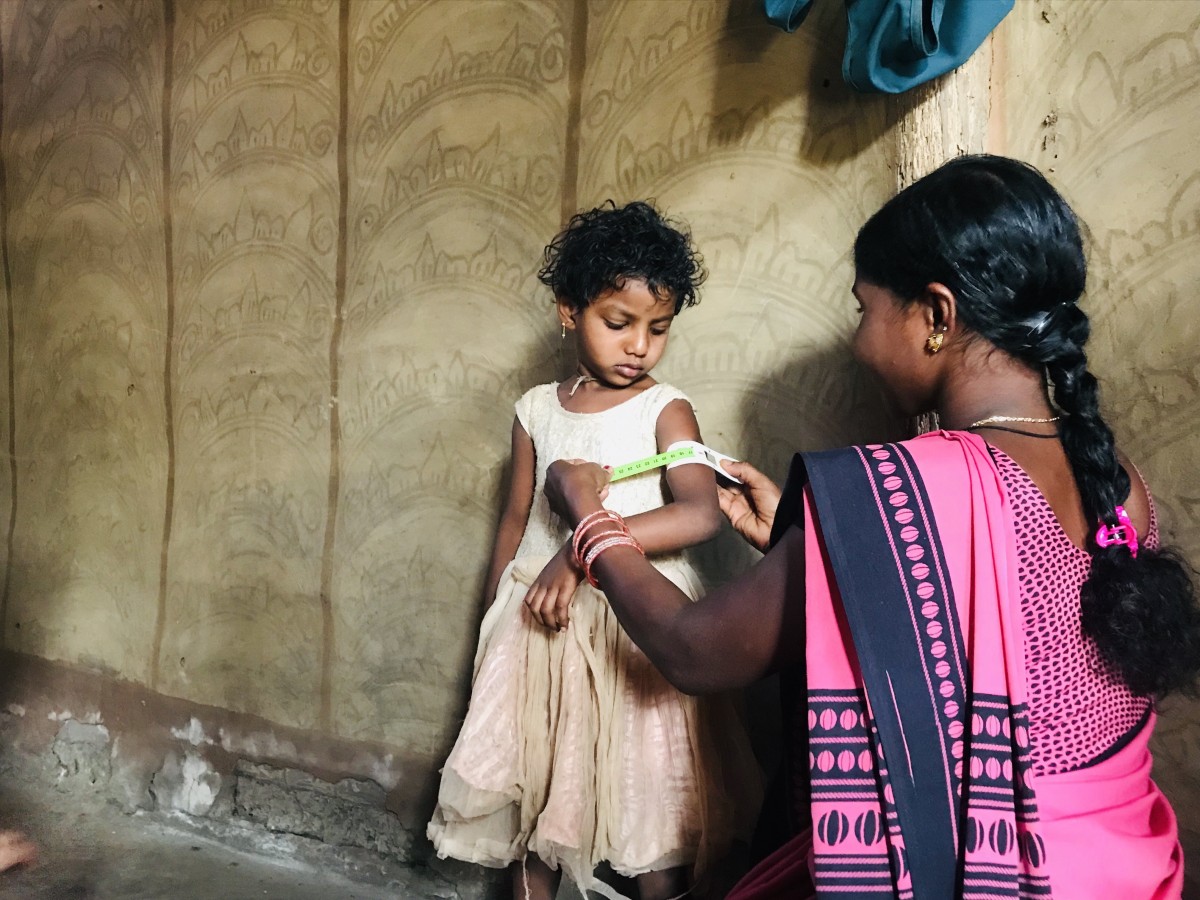 Sita attends to a child in her care. Photo: Nidhi Jamwal

According to the Union health ministry’s Comprehensive National Nutrition Survey 2016-2018, 32.5% of children younger than five years in Karnataka are stunted (lower height for age) and 12.4% are severely stunted. Over 32% are underweight (lower weight for age) and 19.3% are wasted (lower weight for height). A little over 34% of children aged one to four years also have anaemia.

The national scenario isn’t better. The same survey found that 35%, 33% and 17% of children under five in the country are stunted, underweight and wasted, respectively. About 11% of children aged six to 59 months months were in fact found to be acutely malnourished.

The Karnataka state department of women and child development has launched multiple schemes to fight malnutrition and is implementing them through anganwadi centres. For example, under the Ksheera Bhagya scheme, children aged six months to six years receive 150 ml of cream milk five days a week, supplied by the state government at a cost of Rs 124.14 crore per annum.

Families with children who have severe acute malnutrition receive Rs 2,000 in medical benefits, plus Rs 1,000 a year for medicine kits at each anganwadi centre in the state.

These achievements also highlight the centrality of anganwadi centres – and the women who work there – to the state’s ambitions regarding the health and care of its most vulnerable people. 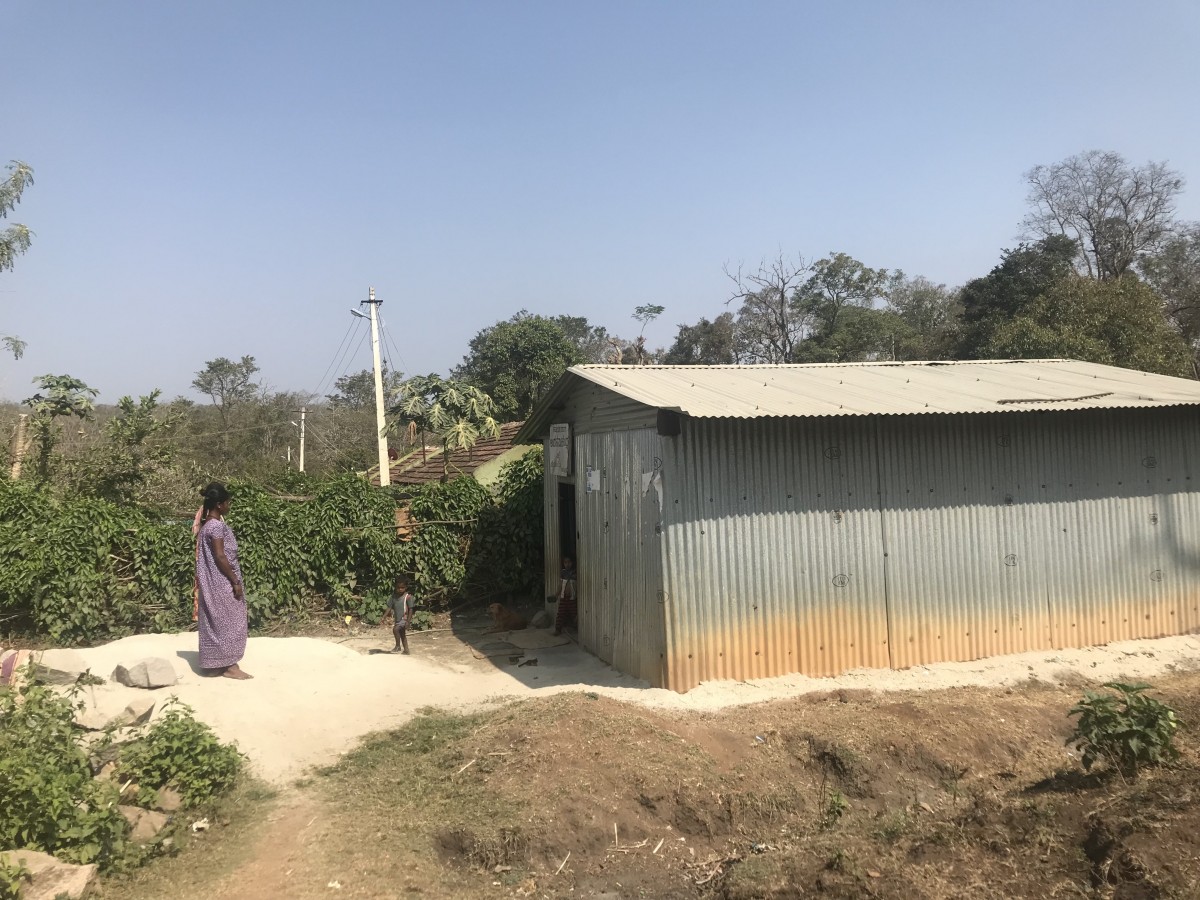 The tribal village of Manamelkudi is home to 42 Jenu Kuruba tribe families and has a mini-anganwadi centre, where Sita works as worker and helper both.

“I have been working at the Manamelkudi anganwadi for the last five years and am used to walking three kilometres to the centre [every day]. Sometimes I feel scared of tiger or elephant attacks, which are common in [the] forest area,” Sita told The Wire. She receives a monthly honorarium of Rs 4,750.

Managing children, their daily meals, preschool lessons, health and hygiene, and counselling pregnant and lactating mothers isn’t easy because she has to do it all alone. (Per ICDS norms, there can be only one worker-cum-helper per mini-anganwadi.)

However, Sita has been able to make sure the children in her anganwadi eat their meals hot, cooked freshly by her, and drink clean water. She also regularly monitors their growth and records the information in their respective growth charts. Unfortunately, the Manamelkudi anganwadi does not have a toilet.

Not very far away lies Balle, another Jenu Kuruba tribal village lying inside the Nagarhole National Park. It has two anganwadi centres and both function from the same tin-shed structure, without a toilet.

“Our anganwadis [have been] operating since 2010, when they were located inside a government school building,” Pushpa, one of the anganwadi workers. “A few years ago, the school building collapsed but the forest department didn’t permit new construction, so we are functioning out of a tin-shed structure.”

Sharda, the other worker, said the forest department had recently okayed a new anganwadi building and that it was expected to come up soon.

There are about 14 anganwadi centres functioning inside the boundaries of the Nagarhole forest. This isn’t easy. There is a constant threat of animal attack, and the anganwadi workers and helpers come from houses located far away. It is difficult to find educated local tribal women to work at an anganwadi because a worker has to be college-educated and an anganwadi helper has to have studied till at least class IV.

It is women like Sita, Sharda, Pushpa and thousands more who form the backbone of the ICDS scheme.

As it happens, they are not happy.

“We have been demanding the legal minimum wage from the government but the Central government has been deaf to our demands,” S. Varalakshmi, president of the Karnataka State Anganwadi Workers’ Association, told The Wire. “It is not ready to compensate us adequately for the labour and the number of hours we put in.”

In April 2017, Karnataka raised the honoraria for anganwadi workers and helpers from Rs 4,000 and Rs 3,000 a month to Rs 8,000 and Rs 4,000 a month, respectively. The state government also reimburses their medical expenses to the tune of Rs 50,000 a year and provides pension. Additionally, the state department of women and child development has supplied twin-burner stoves, LPG cylinders and water filters to all anganwadi centres in the state.

Last October, the state government decided to further increase the monthly salaries of anganwadi workers and helpers to Rs 10,000 and Rs 5,000, respectively, and of mini-anganwadi to about Rs 6,500. “The state government has sanctioned higher honoraria but the same have not been implemented thus far due to some technical glitches,” Varalakshmi said. “It is expected to be fixed soon.”

Varalakshmi alleged the Centre was trying to push the entire burden onto the states. “Earlier, the honorarium for anganwadi workers and helpers was shared between Centre and the states in the ratio of 90:10. Now, the Centre has revised it to 60:40,” she said. According to her, anganwadi workers should get at least Rs 18,000 per month and helpers Rs 9,000 per month. Kerala is the only state that provides minimum wages to all workers. The Goa government offers a monthly salary of about Rs 13,000, and both Haryana and Andhra Pradesh give Rs 11,000 per month. 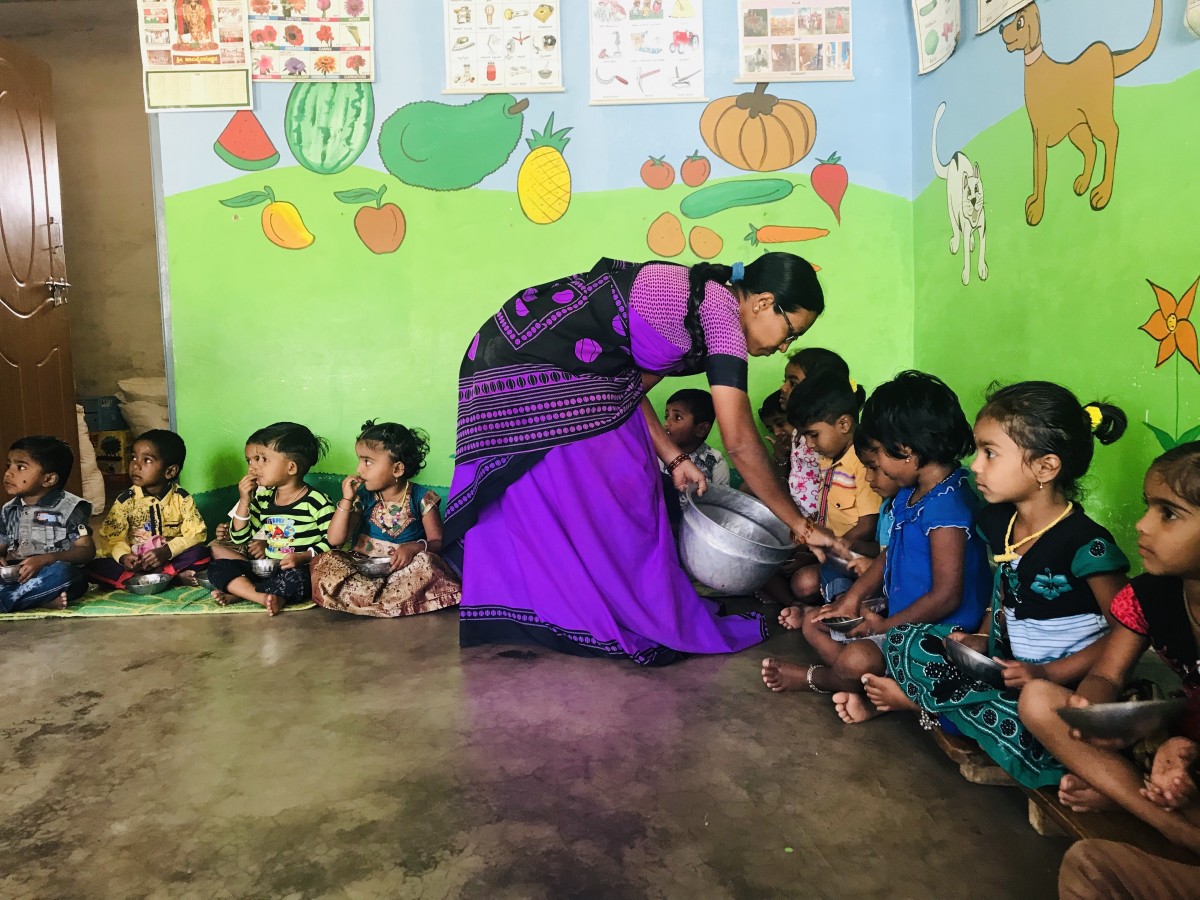 Anganwadi workers and helpers form the backbone of India’s ICDS scheme, and have been demanding minimim wages for their labour. Photo: Nidhi Jamwal

The Karnataka government has a ‘convergence’ programme as part of which it uses funds allocated for the fulfilment of the Mahatma Gandhi National Rural Employment Guarantee Act (MGNREGA) to build anganwadi centres in the state.

For example, the anganwadi in Somlara village of Tumakuru district is 14 years old. For the first 12, it operated out of a rented space against a payment of Rs 700 per month. Two years ago, the government erected a new anganwadi building with Rs 6 lakh from MGNREGA funds.

“One of the villagers donated four gunthe of land to construct the anganwadi. Children love the new anganwadi and parents are also happy sending them here,” T.K. Bhagyamma, the anganwadi worker at Somlara, told The Wire.

At Giriyammanapalya village in Madhugiri, Reshma has been managing an anganwadi centre since 2007. “Until April 2018, I was running the anganwadi from a rented place. In May 2018, a new anganwadi building was constructed with MGNREGA fund,” she said.

Indeed, these new buildings are swanky and spacious, with separate kitchens and tiled toilets. Many of them have attached gardens as well, and vegetables grown there are used to prepare meals for the children.

Data from the state department of women and child development suggests a large number of anganwadi centres still continue to function out of rented spaces, such as schools, community halls, etc., but the state expects to cover them under the convergence scheme in a phased manner.

But while the government has been modernising anganwadis and introducing new programmes, the workers say their demand for better pay remains unaddressed.

“The labour of women is never seen as labour, but viewed as a service,” Sylvia Karpagam, a public health doctor and researcher and a member of the ‘Right to Food’ campaign in Karnataka, told The Wire. “The language used in the context of their work is ‘honorarium’ and not ‘salary’. This discrimination has to go and they should be treated as employees and not workers or helpers.”

Sundaramma has for the last decade been working as an anganwadi helper at Yerahalli village in H.D. Kote block, Mysuru. A short distance away, at the second anganwadi centre in Yerahalli, Nagaveni has been working as a helper for 17 years. Ask them if they’re satisfied with their salaries and they go quiet.

In February 2019, anganwadi workers marched to the Parliament in Delhi to protest against the Centre’s reluctance to increase their pay and pension. In October the same year, anganwadi workers and helpers in Jharkhand protested demanding higher salaries.

In a country with such high malnutrition, it’s important to acknowledge the crucial role these women play as frontline health workers. Without them and their labour, the world’s largest programme to ensure good quality early childhood care and development would flop.