Why Activists Are Upset With the Much-Awaited HIV/AIDS Bill

The Bill falls short of committing to universal access to treatment for people living with HIV, thanks to the phrase “as far as possible”.

A patient displays a bottle of medicine at an office of HIV/AIDS activists in New Delhi October 13, 2014. Credit: Reuters/Anindito Mukherjee 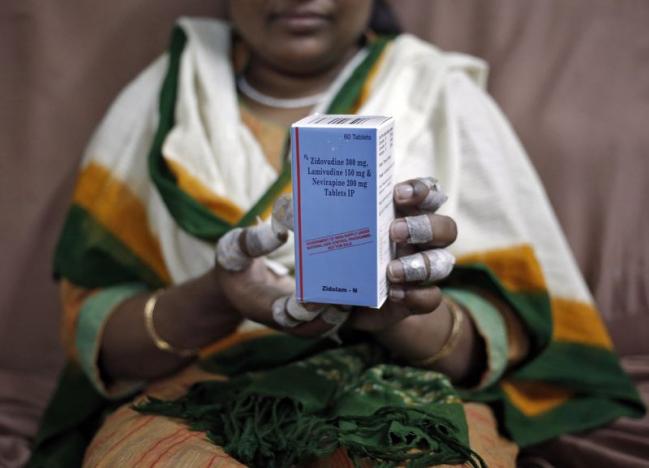 A patient displays a bottle of medicine at an office of HIV/AIDS activists in New Delhi October 13, 2014. Credit: Reuters/Anindito Mukherjee

“My virus inside only listens to ARV [antiretroviral HIV medicines], not verbal assurance from the government,” said Paul Lhungdim, president of the Delhi Network of Positive People (DNP+).

Rajya Sabha passed the HIV/AIDS Bill, 2014 on Tuesday. A day that was awaited for almost a decade ended in disappointment for the HIV community. Their one demand – removal of the phrase “as far as possible” for the treatment – was denied by all in the political class, despite assurances during numerous meetings that the parties had with representatives of the community.

During an hour-long discussion, members like Oscar Fernandes (Congress), Jairam Ramesh (Congress), D. Raja (CPI) and Tiruchi Siva (DMK) clearly supported the deletion of the phrase – which marks the difference between universal access and limited access to treatment. They urged health minister J.P. Nadda to make the amendment. But in an unexpected turn of events, the members withdrew the amendment and gave way to the Bill to pass, thereby diluting the central and state government’s obligation to provide complete treatment and the right to life-saving antiretroviral therapy (ART), the backbone of HIV/AIDS treatment in India.

“I am very sad and angry. We, the community of people living with HIV, cannot and will not accept this Bill, as the contentious clause ‘as far as possible’ is not removed. This HIV Bill, instead of protecting and safeguarding our welfare, is now protecting the government and politicians. This is not our Bill; we don’t accept it,” said Loon Gangte, regional coordinator for South Asia at the International Treatment Preparedness Coalition.

Section 14 of the Bill pertains to treatment for HIV+ people. It states that the central and state governments will provide ART infection management as far as possible. The use of the phrase has been associated with the lack of commitment by the governments to provide treatment to all, which is a reversal of previous policy. The National AIDS Control Organisation (NACO) of the Ministry of Health and Family Welfare lists “Comprehensive care, support and treatment to all persons living with HIV/AIDS” as its objective.

“We could go to NACO and pull them up for stock outs of medicines and testing kits. We have also been to courts for ensuring better treatment. But now if a situation arises where the government cannot provide treatment, this phrase come will handy to deny treatment in the legal sense. This was the only demand of our community, and they have rejected it,” said Lhungdim.

The health minister said in the Rajya Sabha that the government will continue to provide treatment as before, indicating that the inclusion of the phrase is irrelevant.

But the recent experiences of people living with HIV does not give confidence in these words. Stock-outs and shortages of antiretrovirals and testing kits has been a challenge since the government of India rolled out its free HIV control programme in 2003. On March 4, 2017, more than 300 children living with HIV wrote to the prime minister and health minister about the stock-out of life-saving drugs for them. Children’s medicine, Lopinavir syrup, is manufactured only by pharmaceutical firm Cipla in India. As the Indian government did not clear Cipla’s dues for the last two years, the sole manufacturer stopped supply of Lopinavir, creating a crisis for 1,000-odd children. It is only after the Global Fund intervened and paid for the next six months that the syrup was made available to children who depend on the government programme. Another medicine, Effervescent, is still not available in the market.

The Global Fund to Fight AIDS, Tuberculosis and Malaria, an international partnership mainly of G20 countries to fight these diseases, has been funding India’s efforts in treating AIDS. However, its focus is shifting more toward TB, cutting down funds allocated to AIDS. The Global Fund is also reducing funding to middle-income countries, asking them to use the country’s resources to fund their health programmes.

“The Bill, process for which started in 2006, was to address these lacunae. Instead it gives escape route to the authorities,” said Lhungdim.

Going by the signs, unless the government is truly committed, including in writing, the gains made, howsoever limited, will be lost in India.

Treatment of people living with HIV includes treating co-morbidities and opportunistic infections too. People with HIV are prone to diseases like Hepatitis C (HCV), as the mode of transmission of both diseases is the same. Due to their compromised immune system, these persons have higher chance of death due to HCV. There is a global movement to include HCV treatment in national AIDS programmes.

“Last year the government sanctioned Rs 200 crore for HCV treatment. But the money has not been released yet,” said an official from the health ministry on the condition of anonymity.

The Bill includes treatment of opportunistic infections like Kaposi Sarcoma, a type of skin cancer that develops primarily among HIV+ people.

A member of DNP+, Gurbinder (name changed) was diagnosed with Kaposi Sarcoma in 2015. He was already being treated for HIV since 2014. While he can avail HIV treatment, it is the skin cancer that he cannot fight off. His surgery would cost him Rs 60,000 in a government hospital. He assesses that the total cost for treatment will come to Rs 3 lakh, including expensive medicines. He is in no position to afford that and is raising funds through crowd funding.

“Diseases associated with HIV are costly to treat and that is why the government is shying away from making a legal commitment. But it is precisely due to the high cost of these treatments that the HIV community expects authorities to be more accountable,” said Lhungdim.

ART is among the cheap treatments in India now. But treatments evolve and costs change. Unless a long-term system is in place, the faith of the community will remain shaky.

Last week, more than a hundred people living with HIV marched to the health minister’s residence in Lutyen’s Delhi asking that their crucial demand be met. The very next day, they went to the Congress headquarters asking the opposition party to move an amendment in the Upper House. While Nadda assured them that he will consider their demand, Congress spokesperson P.C. Chako said that the party will move the amendment.

“Leader of opposition in the Rajya Sabha Ghulam Nabi Azad will move the amendment. Congress is of the view that all governments should provide free treatment to all people living with HIV and children living with HIV,” Chako told this reporter on March 10. It was under Azad, when he was the health minister, that the Bill had been introduced with the phrase “as far as possible”.

Chako explained it away as a bureaucratic way of writing. “It is the usual legal language that the bureaucrats included. But we know it can have long-lasting impacts and we will press to remove it,” he said.

But Azad was not present in the House and Congress did not move the amendment.

“The Congress party, which has the majority in the house and had support of the Left parties, shamefully withdrew the amendment at the last minute. Politicians have betrayed us, which will have an adverse effect on future treatment of people living with HIV in India. The government does not provide treatment for co-infections like Hepatitis C and opportunistic infections like Kaposi Sarcoma, a form of cancer. The Bill does not meet the expectations of the HIV community,” said Lhungdim. He said that the community will now work towards taking their issues to Lok Sabha MPs and hope that the phrase is not a part of the final law.

Jyotsna Singh is a Delhi-based freelance journalist, focussing on health and pharma.